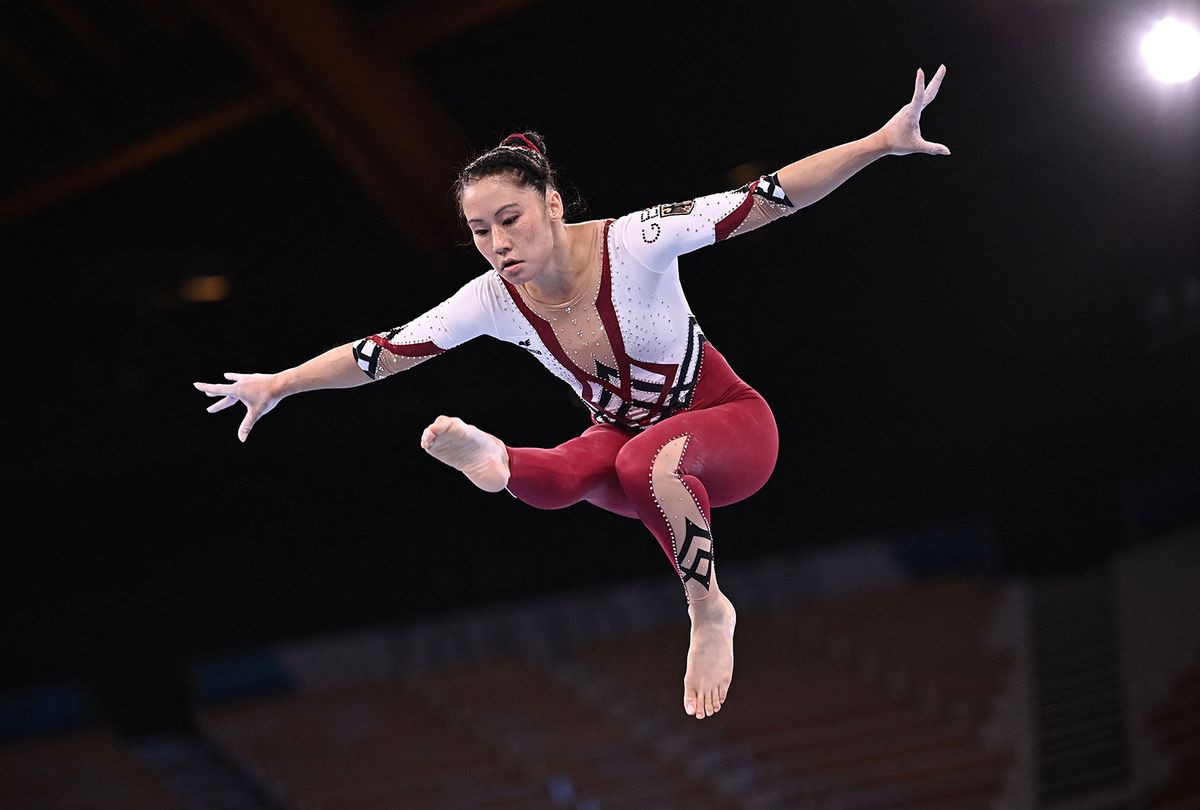 Women athletes are no strangers to being sexualized or picked apart for their looks while just trying to do their jobs. In fact, some of that sexualization can come directly from the very rulemaking bodies and sports culture that shape their work.

At the Tokyo Olympics this year, the German women's gymnastics team is countering that by competing in full-body unitards, compared to the usual leotards we see in women's gymnastics, according to the Washington Post. It's a purposeful move to protest the "sexualization" of the sport for women, the team has said.

"We girls had a big influence on this," German gymnast Sarah Voss told CNN. "The coaches were also very much into it. They said they want us to feel the most confident and comfortable in any case. It just makes you feel better and more comfortable."

As Voss points out, this is about comfort and individual preference. None of this is to say there's anything inherently sexual about women gymnasts competing in leotards. Rather, the problem is the norm and expectation that's long imposed this more revealing uniform on young women and girls competing in the sport, regardless of their feelings of comfort.

In contrast, male gymnasts have long competed in uniforms that are closer to what the German women's team is sporting this year. When it comes to men, there isn't the same, gendered entitlement to seeing men's bodies, or appraising their appearance and value as a relevant facet of the sport.

Meanwhile, on July 20, a Norwegian women's beach handball team was fined 1,500 euros for competing in shorts rather than the sport's needlessly mandated bikini bottoms. The team had reportedly petitioned to be allowed to play in shorts during the EURO 2021 tournament in which it was competing, but was threatened with potential disqualification if they did so. In contrast with the women's mandated uniform of cropped, midriff-baring tops and bikini bottoms, the men's team plays in tank tops and long shorts.

The outrageous double standard caught the world's attention, and even musician Pink was moved enough to offer to pay their fine.

"I'm VERY proud of the Norwegian female beach handball team FOR PROTESTING THE VERY SEXIST RULES ABOUT THEIR "uniform"" Pink tweeted. "The European handball federation SHOULD BE FINED FOR SEXISM. Good on ya, ladies. I'll be happy to pay your fines for you. Keep it up."

And let's not forget that in 2018, tennis legend Serena Williams was prohibited from competing in a catsuit and required to wear a skirt, despite how pants better supported circulation in her legs after a difficult experience with childbirth. The requirement of revealing uniforms or rigidly policing of uniforms, in general, pose an issue for women athletes across nearly all sports, beyond gymnastics.

It's also impossible to ignore that the German gymnastics team's decision to wear the unitard comes amid the first Olympic games since revelations about disgraced, former Team USA women's gymnastics doctor Larry Nassar, who was exposed for sexually assaulting and abusing scores of young, female gymnasts — including star gymnast Simone Biles herself.

While Nassar's name has become synonymous with the crisis of endemic abuse in gymnastics, the issue was deeper than one man. Nassar had been enabled by dozens of coaches, officials, and a greater culture of objectifying and denying agency to young female gymnasts.

Addressing this culture, and the deep complicity of many adults in the world of women's gymnastics, isn't going to happen overnight, and as the German women's team is certainly aware, uniforms alone aren't going to solve this. But this move from the team is an important step toward giving young women athletes decision-making power, encouraging them to value their feelings of comfort.

German gymnast Elisabeth Seitz wrote in an Instagram post, "Because, in our opinion, every gymnast should be able to decide in which type of suit she feels most comfortable — and then do gymnastics." She added, "That doesn't mean we don't want to wear the normal leotard any more. It is a decision day by day, based on how we feel and what we want. On competition day, we will decide what to wear."

Biles herself has previously expressed support for the German team's decision to compete in unitards. "I stand with their decision to wear whatever they please and whatever makes them feel comfortable," Biles told the Washington Post in June. "So if anyone out there wants to wear a unitard or leotard, it's totally up to you.

Biles' teammate Sunisa Lee echoed this sentiment, telling the Post, "People should be able to wear what they feel comfortable in, and it shouldn't be a leotard if you don't want to wear it."