After 20 years of carnage and $1 trillion, the tragic Afghan misadventure is over — and that's just for starters 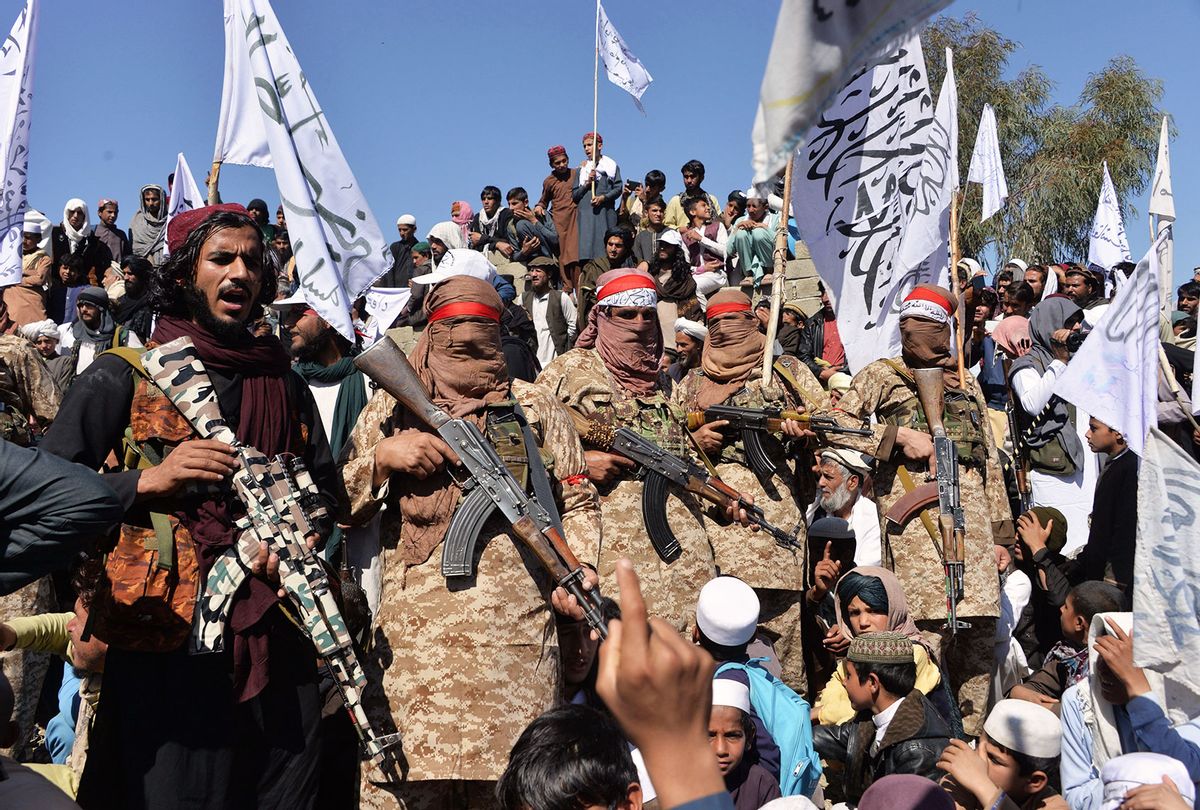 Afghan Taliban militants and villagers attend a gathering as they celebrate the peace deal and their victory in the Afghan conflict on US in Afghanistan, in Alingar district of Laghman Province on March 2, 2020. - The Taliban said on March 2 they were resuming offensive operations against Afghan security forces, ending the partial truce that preceded the signing of a deal between the insurgents and Washington. (NOORULLAH SHIRZADA/AFP via Getty Images)
--

The debacle in Afghanistan, which will unravel into chaos with lightning speed over the next few weeks and ensure the return of the Taliban to power, is one more signpost of the end of the American empire. The two decades of combat, the one trillion dollars we spent, the 100,000 troops deployed to subdue Afghanistan, the high-tech gadgets, artificial intelligence, cyber-warfare, Reaper drones armed with Hellfire missiles and GBU-30 bombs and the Global Hawk drones with high-resolution cameras, Special Operations Command composed of elite Rangers, SEALs and air commandos, black sites, torture, electronic surveillance, satellites, attack aircraft, mercenary armies, infusions of millions of dollars to buy off and bribe the local elites and train an Afghan army of 350,000 that has never exhibited the will to fight, failed to defeat a guerrilla army of 60,000 that funded itself through opium production and extortion in one of the poorest countries on earth.

Like any empire in terminal decay, no one will be held accountable for the debacle or for the other debacles in Iraq, Syria, Libya, Somalia, Yemen or anywhere else. Not the generals. Not the politicians. Not the CIA and intelligence agencies. Not the diplomats. Not the obsequious courtiers in the press who serve as cheerleaders for war. Not the compliant academics and area specialists. Not the defense industry. Empires at the end are collective suicide machines. The military becomes in late empire unmanageable, unaccountable and endlessly self-perpetuating, no matter how many fiascos, blunders and defeats it visits upon the carcass of the nation, or how much money it plunders, impoverishing the citizenry and leaving governing institutions and the physical infrastructure decayed.

The human tragedy — at least 801,000 people have been killed by direct war violence in Iraq, Afghanistan, Syria, Yemen and Pakistan, and 37 million have been displaced in and from Afghanistan, Iraq, Pakistan, Yemen, Somalia, the Philippines, Libya and Syria, according to the Watson Institute at Brown University — is reduced to a neglected footnote.

Mark Twain, who was a fierce opponent of the efforts to plant the seeds of empire in Cuba, the Philippines, Guam, Hawaii and Puerto Rico, wrote an imagined history of America in the 20th century where its "lust for conquest" had destroyed "the Great Republic … [because] trampling upon the helpless abroad had taught her, by a natural process, to endure with apathy the like at home; multitudes who had applauded the crushing of other people's liberties, lived to suffer for their mistake."

Twain knew that foreign occupations, designed to enrich the ruling elites, use occupied populations as laboratory rats to perfect techniques of control that soon migrate back to the homeland. It was the brutal colonial policing practices in the Philippines, which included a vast spy network along with routine beatings, torture and executions, that became the model for centralized domestic policing and intelligence gathering in the United States. Israel's arms, surveillance and drone industries test their products on the Palestinians.

It is one of the dark ironies that it was the American empire, led by Jimmy Carter's national security advisor Zbigniew Brzezinski, that spawned the mess in Afghanistan. Brzezinski oversaw a multibillion-dollar CIA covert operation to arm, train and equip the Taliban to fight the Soviets. This clandestine effort sidelined the secular, democratic opposition and assured the ascendancy of the Taliban in Afghanistan, along with the spread of its radical Islam into Soviet Central Asia, once Soviet forces withdrew. The American empire would, years later, find itself desperately trying to destroy its own creation. In April 2017, in a classic example of this kind of absurd blowback, the United States dropped the "mother of all bombs" — the most powerful conventional bomb in the American arsenal — on an Islamic State cave complex in Afghanistan that the CIA had invested millions in building and fortifying.

The only way to fight terrorists is to isolate them within their own societies. I was in the Middle East for The New York Times after the attacks. Most of the Muslim world was appalled and revolted at the crimes against humanity that had been carried out in the name of Islam. If we had the courage to be vulnerable, to grasp that this was an intelligence war, not a conventional war, we would be far safer and secure today. These wars in the shadows, as the Israelis illustrated when they tracked down the assassins of their athletes in the 1972 Olympic games in Munich, take months, even years of work.

But the attacks gave the ruling elites, lusting for control of the Middle East, and especially of Iraq, which had nothing to do with the attacks, the excuse to carry out the greatest strategic blunder in American history — the invasion of Afghanistan and Iraq. The architects of the war, including then-Sen. Joe Biden, knew little about the countries being invaded, did not grasp the limits of industrial and technocratic war or the inevitable blowback that would see the United States reviled throughout the Muslim world. They believed they could implant client regimes by force throughout the region, use the oil revenues in Iraq — since the war in Afghanistan would be over in a matter of weeks — to cover the cost of reconstruction and magically restore American global hegemony. It did the opposite.

Invading Iraq and Afghanistan, dropping iron fragmentation bombs on villages and towns, kidnapping, torturing and imprisoning tens of thousands of people, using drones to sow terror from the skies, resurrected the discredited radical jihadists and was a potent recruiting tool in the fight against U.S. and NATO forces. We were the best thing that ever happened to the Taliban and al-Qaida.

There was little objection within the power structures to these invasions. The congressional vote was 518-1 in favor of empowering President George W. Bush to launch a war, with Rep. Barbara Lee being the lone dissenter. Those of us who spoke out against the idiocy of the looming bloodlust were slandered, denied media platforms and cast into the wilderness, where most of us remain. Those who sold us the war kept their megaphones, a reward for their service to empire and the military-industrial complex. It did not matter how cynical or foolish they were.

Historians call the self-defeating military adventurism of late empires "micro-militarism." During the Peloponnesian War (431-404 B.C.) the Athenians invaded Sicily, suffering the loss of 200 ships and thousands of soldiers and triggering revolts throughout the empire. Britain attacked Egypt in 1956 in a dispute over the nationalization of the Suez Canal and was humiliated when it had to withdraw its forces, bolstering the status of Arab nationalists such as Egypt's Gamal Abdel Nasser.

"While rising empires are often judicious, even rational in their application of armed force for conquest and control of overseas dominions, fading empires are inclined to ill-considered displays of power, dreaming of bold military masterstrokes that would somehow recoup lost prestige and power," historian Alfred McCoy writes in "In the Shadows of the American Century: The Rise and Decline of US Global Power." "Often irrational even from an imperial point of view, these micromilitary operations can yield hemorrhaging expenditures or humiliating defeats that only accelerate the process already under way."

The death blow to the American empire will, as McCoy writes, be the loss of the dollar as the world's reserve currency. This loss will plunge the United States into a crippling and prolonged depression. It will force a massive contraction of the global military footprint.

The ugly, squalid face of empire, with the loss of the dollar as the reserve currency, will become familiar at home. The bleak economic landscape, with its decay and hopelessness, will accelerate an array of violent and self-destructive pathologies including mass shootings, hate crimes, opioid and heroin overdoses, morbid obesity, suicides, gambling and alcoholism. The state will increasingly dispense with the fiction of the rule of law to rely exclusively on militarized police, essentially internal armies of occupation, and the prisons and jails, which already hold 25 percent of the world's prisoners although the United States represents less than 5 percent of the global population.

Our demise will probably come more swiftly than we imagine. When revenues shrink or collapse, McCoy points out, empires become "brittle." An economy heavily dependent on massive government subsidies to produce primarily weapons and munitions, as well as fund military adventurism, will go into a tailspin with a heavily depreciated dollar, falling to perhaps a third of its former value. Prices will dramatically rise because of the steep increase in the cost of imports. Wages in real terms will decline. The devaluation of Treasury bonds will make paying for our massive deficits onerous, perhaps impossible. The unemployment level will climb to Depression-era levels. Social assistance programs, because of a contracting budget, will be sharply curtailed or eliminated. This dystopian world will fuel the rage and hyper-nationalism that put Donald Trump in the White House. It will spawn an authoritarian state to keep order and, I expect, a Christianized fascism.

The tools of control on the outer reaches of empire, already part of our existence, will become ubiquitous. The wholesale surveillance, the abolition of basic civil liberties, militarized police authorized to use indiscriminate lethal force, the use of drones and satellites to keep us monitored and fearful, along with the censorship of the press and social media, familiar to Iraqis or Afghans, will define America. We are not the first empire to suffer this fate. It is a familiar ending. Imperialism and militarism are poisons that eradicate the separation of powers designed to prevent tyranny, and extinguish democracy. If those who orchestrated these crimes are not held accountable, and this means organizing sustained mass resistance, we will pay the price, and we may pay it soon, for their hubris and greed.