Gaetz, MTG turned away from jail during visit to Jan. 6 "political prisoners"

It's the latest GOP stunt designed to recast the rioters, who face legitimate charges, as "political prisoners" 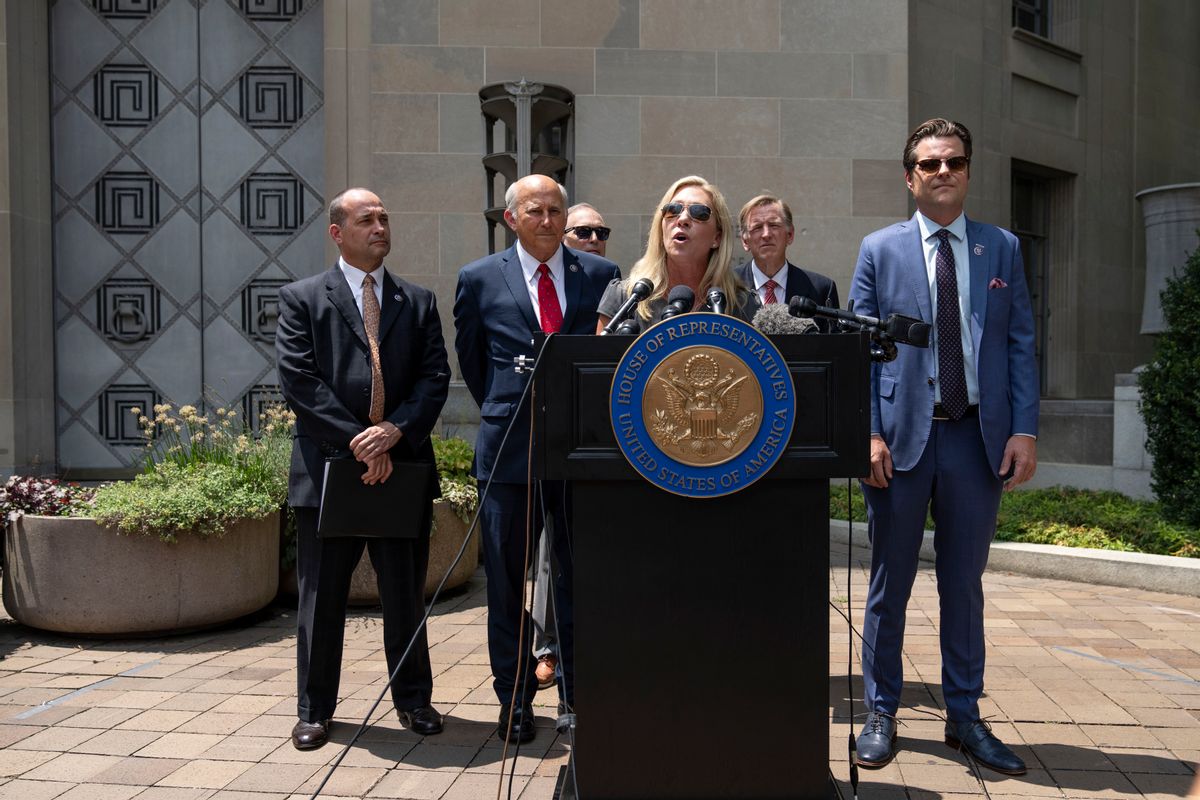 A group of GOP lawmakers, including Reps. Matt Gaetz and Marjorie Taylor Greene, were turned away from a Washington, D.C.-area jail Thursday while attempting to visit a number of Jan. 6 rioters at the facility, reports said.

Multiple Congresspeople reported being "locked out" from the building after being warned that they were trespassing. Some even live-tweeted the encounter for their millions of followers.

"What are they hiding?" Gaetz tweeted after the stunt.

"We absolutely are not trespassing and if that attitude is any indication of how they're treating their prisoners inside I have great concerns," Greene told reporters at the facility after being turned away.

It was the latest attempt by Republicans in Congress to recast the insurrectionists — who were arrested on legitimate charges, as Politifact noted in a fact-check this week — as "political prisoners." The publication deemed the claim that those being held for their role in the Capitol attack were "political prisoners" or "non-violent trespassers" as false.

Multiple defendants have levied accusations of mistreatment at the facility, including 23-hour days in solitary confinement and beatings, though the allegations notably haven't been accompanied by much evidence. The D.C. Department of Corrections denies these claims, and, as other news organizations have noted, the vast majority of Jan. 6 defendants have already been sentenced or released from custody.

The prisoners' turn as a conservative cause célèbre peaked earlier this week when a group of Congressional Republicans sent a letter calling for Attorney General Merrick Garland to answer questions on the subject. They followed up the letter with a short-lived press conference Wednesday featuring Gaetz and Greene, along with Reps. Louie Gohmert, R-Texas, and Paul Gosar, R-Ariz.

The ostensibly pro-Jan. 6 event was intended to draw attention away from the House Select Committee investigating the attack on the U.S. Capitol building, which was meeting at the same time to hear testimony from the police officers who were attacked by rioters that day.

Several of the Congresspeople even read letters from the defendants intended to burnish their reputation.

"We are just regular freedom loving Americans, with a tendency towards humorous shenanigans," one such letter read.

They were chased off by protesters, including a literal whistleblower and throngs of sign-bearers with messages like, "Traitors + Rapists: Sit Down," "Pedophiles for Trump," "Jan. 6 Was an Inside Job" and similar messages.

The same group of Republicans found a new boogeyman to agitate against Thursday in House Speaker Nancy Pelosi's Capitol mask mandate. Several representatives headed over from their normal digs in the House side of the building to the Senate chamber — which does not have an accompanying mask mandate.

Multiple outlets also reported that Rep. Lauren Boebert, R-Colo., threw a mask back at a staffer who offered her one upon entrance to the House chamber. A spokesperson for the Congresswoman disputed that characterization, and said she "returned it with a quick slide" across a table.

"Rep. Boebert refuses to comply with Speaker Pelosi's anti-science, totalitarian mask mandate," a spokesperson for Boebert told CNN. "When offered a mask, she returned it with a quick slide across the table."