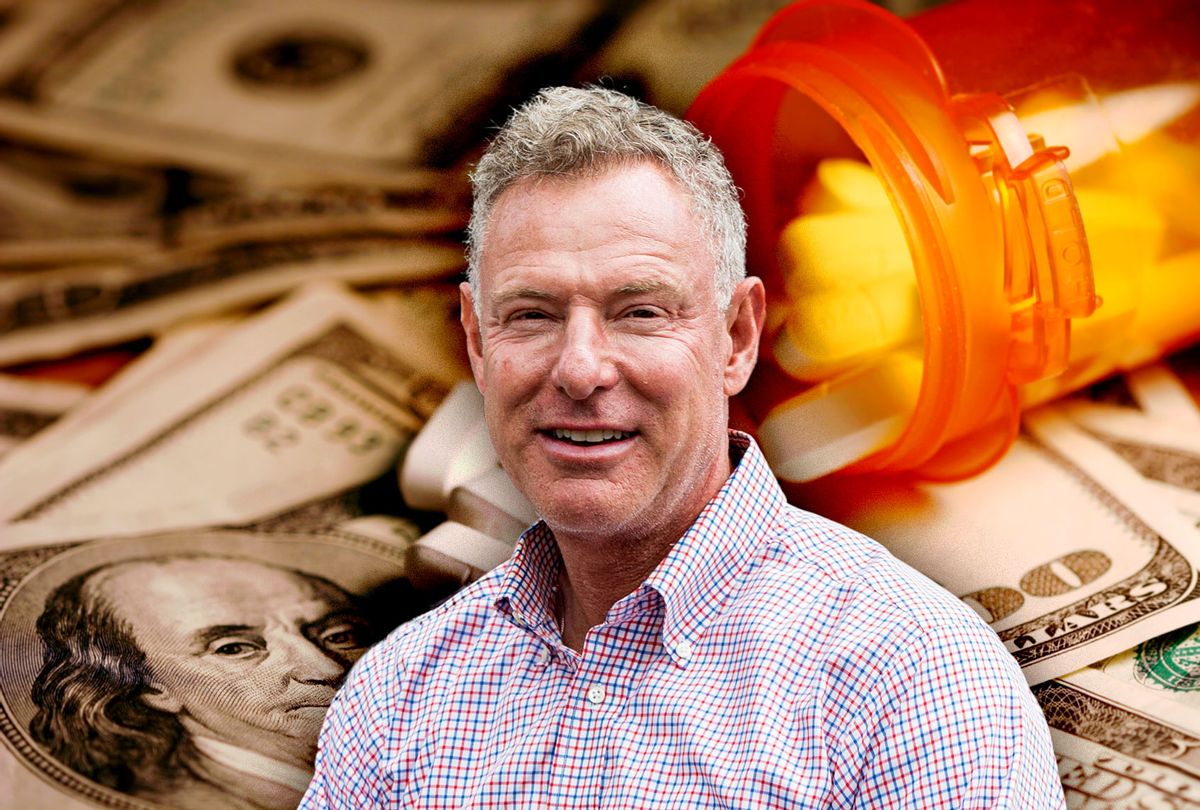 Rep. Scott Peters, a low-profile California Democrat now serving his fifth term in the House, two years ago supported a landmark bill that would have substantially lowered the cost of life-saving drugs for Americans. Now he's the apparent leader of a group of centrist Democrats who oppose that very same bill, and who have collectively received hundreds of thousands of dollars in campaign contributions from the pharmaceutical industry.

Peters' apparent flipflop, reported by Stat last week, centers on H.R. 3, a Democratic House bill that would save American consumers billions of dollars on costly drugs for life-altering diseases like cancer, diabetes and multiple sclerosis.

Chief among the bill's provisions is a rule that establishes what is called "international reference pricing," effectively capping the price of a drug in the U.S. at 120% of the average price paid in Australia, Japan, Canada, Germany, France and the U.K. With that cap in place, the Secretary of Health and Human Services would then be mandated to negotiate drug prices directly with pharmaceutical companies, establishing a fixed price for a given drug that would apply to employers, private insurers and Medicare recipients.

H.R. 3 has been estimated to yield $120 billion in savings for consumers over the next decade, according to the nonpartisan Centers for Medicare and Medicaid Services. It's no surprise, then, that 90% of American adults support the bill's policy of letting the government negotiate with drug producers.

But when it comes to drug pricing in recent years, popular opinion has repeatedly been thwarted or ignored by Big Pharma, which has fought aggressively against H.R. 3 by locating and supporting sympathetic members of Congress — which now evidently include Scott Peters.

In early May, Peters — who has represented California's 52nd district, in and around San Diego, since 2013 and was once named "biotech legislator of the year" —  assembled a coterie of 10 moderate House Democrats to sign a vaguely-worded letter to House Speaker Nancy Pelosi, urging her to consider a balance between "innovation and affordability."

"As we have just seen with the lifesaving, record-breaking development of COVID19 vaccines and therapies, America benefits from the most innovative and capable researchers in the world, and from public-private partnership that encourages world-leading biomedical research and development," the caucus wrote, adding: "To achieve this, we must garner bipartisan, bicameral support, with buy-in from a majority of Americans and stakeholders in the public and private sector."

The letter never specifically mentions H.R. 3, but there is little doubt that's the target. The lawmakers' rhetoric echoes a favorite Big Pharma talking point: that government regulation of drug prices will disincentivize research and development.

In late 2019, however, when the bill was first introduced, Peters praised the measure. He did express concerns that it might make drug development "particularly challenging for small and emerging companies in California" and introduced an amendment to support innovation, but ultimately agreed to back the bill.

After that, the pharmaceutical industry began to flood Peters with campaign cash.

The Center for Responsive Politics found that during the 2020 election cycle Peters received nearly $230,000 from pharmaceutical and health companies, many of whose products would be directly targeted by the measure. According to FEC filings reviewed by Salon, Peters received money from Abbvie, AstraZeneca, Pfizer, Merck, Amgen, Johnson & Johnson and Gilead Sciences — an array of big-name pharmaceutical companies, none of which could plausibly be described as "small" or "emerging."

During that same period, Peters' emerging coalition of Pharma-friendly moderate Democrats likewise took in significant donations from companies in the sector, according to a report by Brick House. Among the major recipients were Rep. Tony Cárdenas of California ($144,735), Rep. Kurt Schrader of Oregon ($144,252), Rep. Stephanie Murphy of Florida ($120,912), Rep. Lou Correa of California ($98,125) and Rep. Josh Gottheimer of New Jersey ($96,228) — all of whom had originally voted to approve the bill back in 2019.

Just last month, Peters announced his opposition to H.R. 3, specifically objecting to international reference pricing, a provision of the bill that had not changed from 2019 to 2021.

"I will not vote for that," Peters said in an interview with Roll Call. "If you institute it, you won't have cures because you'll dry up all the private investment that does that research."

Immediately after the letter to Pelosi from Peters and his allies, he once again received thousands of dollars in contributions from pharmaceutical interests, raking in $66,400 between May 4 and June 30 from executives associated with Pfizer, Eli Lilly, Bristol Myers Squibb, Merck and the industry trade group PhRMA, according to a Stat analysis.

None of this has gone unnoticed by advocates for patients and Social Security recipients. Over the last month, both Social Security Works and Patients for Affordable Drugs Now have run ads calling out Peters' apparent flipflop, as well as the campaign cash he's received from Big Pharma.

Alex Lawson, the executive director of Social Security Works, told Salon that while the donations might help Peters get re-elected in the short term, they will damage his long-term political prospects.

"Scott Peters' doomed campaign to keep Americans paying the highest drug prices in the world is fully funded by the corporations who make billions off of those high prices," Lawson said by email. "Being the paid mercenary for the corporations that profit off of withholding drugs to sick people might seem like a good way to make a lot of money, but Peters is going to learn that it is actually the best way to lose his job."

David Mitchell, the founder of Patients for Affordable Drugs Now, echoed Lawson, saying that the Big Pharma donations were "the only precipitating event" that could conceivably have prompted Peters' reversal on H.R. 3.

"When Scott Peters expresses strong opposition to H.R. 3, contrary to the support and proud vote he offered in 2019, he is standing with the pharmaceutical industry, which has given him a hell of a lot of money against the will of the American people," Mitchell told Salon in an interview. "And that, to us — that's unforgivable. Absolutely unforgivable."

Salon asked Peters' office for clarification on his evident change of heart. Peters declined an interview request, but his office provided the texts of two of his floor speeches from 2019 and his vote on an amendment to H.R. 3 that same year, saying that all three "show his longstanding concerns with the international [reference] pricing element of HR3."

In fact, none of those materials make clear Peters' position on international reference pricing. Peters' own amendment to the bill, introduced in 2019, does not address that issue.

Peters' office further suggested that the lawmaker's reversal on H.R. 3 was a question of political strategy and calculation: "H.R. 3 had no chance of moving through the Senate in 2019 without fixing the index pricing piece. The same is true today. Now is exactly the right time – both sides are motivated to lower drug costs and there is momentum to fix this. If we don't make progress on this piece we run the risk of making no progress at all and that helps no one."

Removing international reference pricing, however, fundamentally changes the nature of the bill. Without a price cap in place, the federal government is in a vastly weaker position to negotiate with drug manufacturers.

As to the industry's central claim that drug price controls will harm innovation, policy experts are skeptical. In a letter last month to the San Diego Tribune, Peters wrote that "accounting for failures, developing one new drug costs a company $1 billion to $2 billion." Estimates that high, as the New York Times has reported, are generally products of abstruse corporate methodologies that account for amorphous expenses like opportunity or "time" costs. Public Citizen, a consumer advocacy nonprofit, found back in 2014 that drug companies actually spend an average of $161 million on R&D per new drug.

Peters also claimed in his letter that "H.R. 3 would signal to potential investors that they might not be able to recoup their investment even if a product succeeds." But the expenses associated with one truly innovative drug sometimes take only weeks for companies to recoup in profits, as The New Republic noted.

Pro-pharma lawmakers — as Peters evidently is now — tend to frame price reductions as an unquestionable death blow to innovation. In fact, it's "incredibly hard to predict how reductions in pricing may affect the future of drug development," said Kristi Martin, who provides health care policy expertise to the Commonwealth Fund.

"In the last decade we have seen a significant increase in drug costs in the U.S. and during that same period of time, generally all drugs coming to market relied on some portion of public funding for R&D," Martin told Salon by email. "While several innovative drugs have come to market, most new patents granted are for modifications to existing drugs and not new drugs."

Martin directed Salon to a 2018 study by the Journal of Law and the Biosciences, which found that the vast majority of drugs introduced the global market are in fact retreads of drugs already on the market. This is largely the result of "evergreening," a legal strategy in which drug companies make minuscule tweaks to existing drugs in order to renew their patents. In other words, most drugs introduced to the market are only "innovative" in their ability to generate endless streams of revenue.

The solution, Martin said, is straightforward: "If we change the incentives and reward truly inventive, innovative advancements in treatments and increase funding for R&D, we can still have a robust pipeline that is driving toward effective cures and treatments."

Scholars have also noted that pharmaceutical companies routinely spend more on lobbying and marketing than on R&D, another reflection of the fact that Big Pharma's principal interest is in selling their products, rather than improving them. Just this month, the House Oversight Committee found that 14 pharmaceutical giants spent $58 billion more on buybacks, dividends and executive compensation than on R&D from 2016 to 2020.

It's definitely possible that the introduction of international reference pricing "would be a pretty significant reduction in revenue in the U.S." for the pharmaceutical industry, Andrew Mulcahy, a senior policy researcher at the RAND Corporation, told Salon. But Big Pharma is still "going to do very well in terms of a return," he added, because its profits are already so immense.

According to the Journal of the American Medical Association, between 2000 and 2018, 35 major drug companies received combined revenue of $11.5 trillion, with gross profit of $8.6 trillion. This amounts to a whopping 75% gross profit margin, nearly 10 times higher than the average profit margin found across U.S. industries, according to an NYU analysis.

Numbers like that reflect a market dynamic that is "out of whack," said Mitchell, the founder of Patients for Affordable Drugs Now.

"We need both innovation and affordability, because drugs don't work if people can't afford them," Mitchell said. "We believe there is plenty of room to lower prices and to ensure that we can continue to get the innovation we need and prices we can afford." The "innovation scare tactic" used by the industry, he added, "feels like someone putting a gun to my head and saying, 'It's your money or your life.'"