“FBoy Island” recognizes that in the age of influencers, coupledom is business 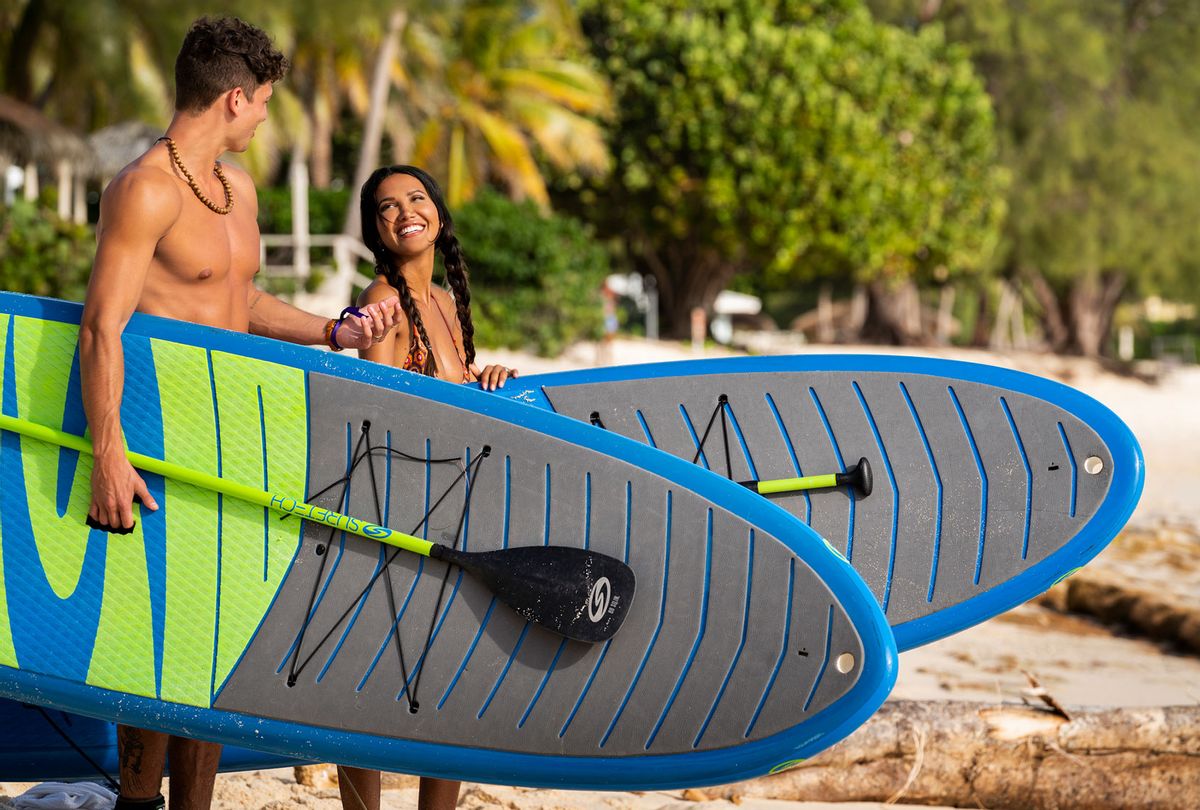 Hosted and executive produced by comedian Nikki Glaser, HBO Max's "FBoy Island" sets up three women in a tropical paradise to date around and discover who amongst 24 men is a self-identified "fboy" or player, and who is a self-identified "nice guy." Choosing the wrong guy ultimately puts the women's hearts, not to mention $100,000 in prize money, at risk.

"FBoy Island" sets itself apart with more than just its premise though. Throughout the season, the singles can be heard saying things like, "I chose you because I think we looked good together," or imagining themselves as a power couple on Maxim's Hot 100 list. Choosing a partner based on attraction isn't enough anymore; it's how they are perceived as a couple that is the sticking point.

This is not a critique necessarily, but rather by design. The show is both hyper-aware that so-called fboys are a fixture on reality dating shows, just as social media and career influencers are too. From the moment Nakia Renee, Sarah Emig and CJ Franco — all of whom do some modeling and social media influencing themselves — are invited to choose the men for their first mini dates, they note the importance of a potential partner looking good with them.

The keenness of the leads and contestants on each other's visual compatibility and who might look best on their Instagram grids isn't unrelatable, and it isn't all shallow. There's no shame in having a personal "brand," seeking physical compatibility, or anything like that. But the importance of this is taken to a new level by "FBoy Island," a show on which personal branding — and who the stars choose to include in their brands — is a matter of business.

On the show's third episode, Sarah, CJ and Nakia choose teams from the men to do a group photoshoot date. CJ observes, "You learn a lot about somebody when you take a photo with them," while Nakia comments, "Photoshoots reveal a lot of chemistry."

"I'm really excited to see who I have the most chemistry with and who I'd look really good with," she adds.

They're not wrong about what you can learn from or how you can connect with someone by taking photos together, but in the brave new world of Instagram, Tik Tok, and influencing, there are new stakes to all of this. Sure, successful, wealthy single influencers exist. But influencer couples have increasingly become where the money is at, because, as Vox's Rebecca Jennings reported earlier this year, becoming a canvas upon which the young and impressionable can project their idea of "#couplegoals" is a lucrative business.

"Couple goals" is an entire genre of its own on Tik Tok, Vox reported, and coupled influencers share content that uncoupled influencers simply can't, mostly including curated or even wholly manufactured videos and photos and stories that depict the ups and downs of romantic relationships. Just as there's a "couple goals" genre, there's also an entire genre of YouTuber breakup announcement videos, carefully and purposefully shot with the members of the former couple sitting appropriately far apart, with somber expressions and dim lighting. Followers of "Bachelor Nation" have read some variation of the same Instagram caption with a lengthy and generic breakup announcement dozens of times, since the dawn of the social-media-influencer-to-reality-show-star pipeline.

No one should be surprised by the candid and overt nature in which social media, image and appearance are described on a show like "FBoy Island." If anything, the women's honest roasts of contestants' fashion blunders, poor picture-taking skills and "thirsty" or weak social media game from the contestants are true to what's probably going on, behind the scenes, to create most of the couple goals content that saturate our social media feeds.

Public displays of affection, or PDA, were once but an annoying nuisance to which we're often subjected on commutes to work or pre-pandemic nights out. Today, PDA is a highly profitable market for the unrealistically attractive, and those who are either void of personalities or good enough at hiding what trace of one they may have on-camera, so legions of fans can freely fantasize and project onto them. Don't forget that when the "FBoy" Islanders cuddle up or execute a picture-perfect smooch.

As one could logically predict, there's a dark side to couple goals influencing — namely that, pending whether a "couple" is real or not, rose-tinted montages and Instagram carousels can conceal real-life struggles with domestic abuse and entrapment. Teenage Tik Tokers Sienna Mae Gomez and Jack Wright had a messy, much-publicized breakup earlier this year in which both alleged abuse and claimed they barely even had a relationship off-camera, Insider reported. Even in non-abusive cases, breakups are always difficult to initiate and endure, and when your couple persona becomes your entire life as an influencer with thousands if not millions craving every detail about your relationship, one can deduce this makes a breakup exponentially more difficult.

The motives and business side of it all are out in the open on "FBoy Island," and if #couplegoals content is truly a social media genre that's here to stay, maybe honesty is the best policy. None of this is to say that "FBoy Island" is a perfect, wholly transparent dating show, as if such a thing could even exist. First of all, is there really any difference between self-identified fboys and nice guys who have both opted to participate in a reality show in the clout-chasing world of 2021?

But if not always 100% honest, "FBoy Island" is at least highly self-aware and entertainingly self-deprecating. With the lack of marital pressures and narratives imposed by shows like "The Bachelor," "FBoy Island" doesn't try to hide that the lines between love and business are increasingly blurry when it comes to the influencer-participants such dating shows attract. It's all about fun, candor, and the occasional joke about an fboy trying to "bang" your mother.