Rebuilding my relationship with my father, one kebab at a time

One author’s exploration of growing pains, adulthood and homesickness 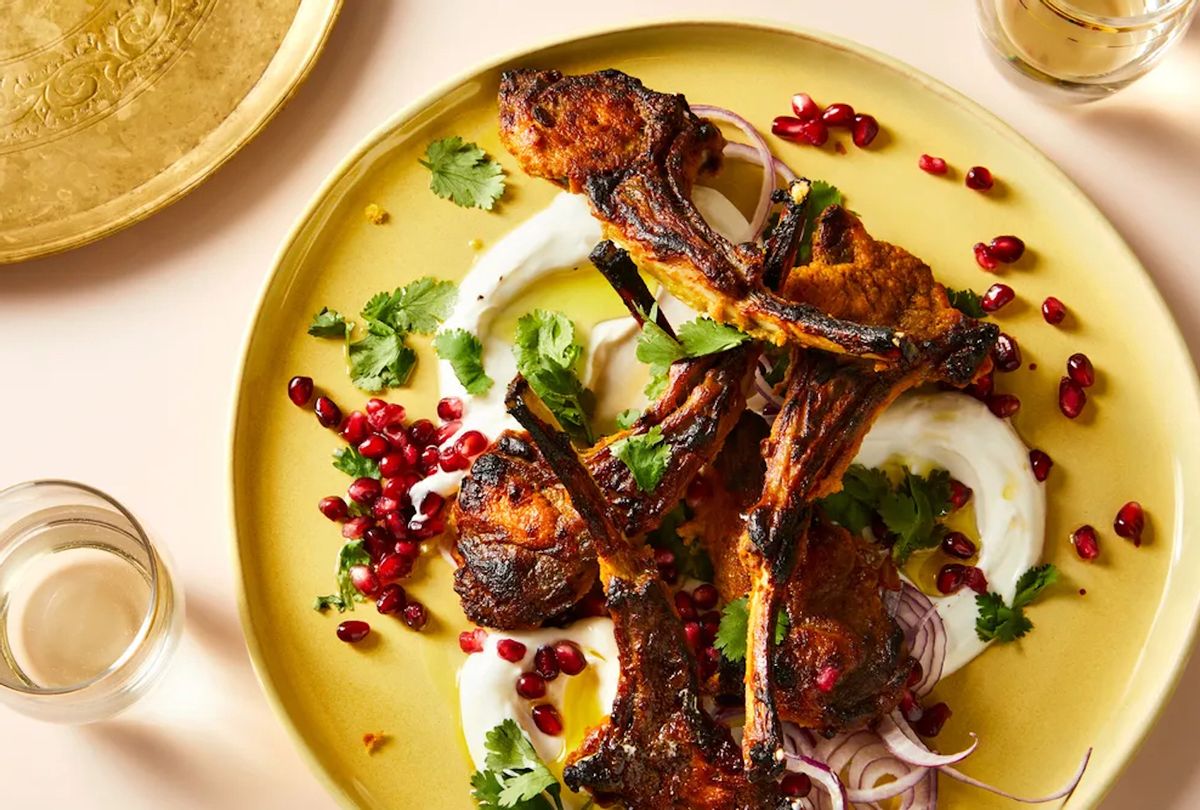 Some of my most visceral childhood memories involve going to the butcher's market with my father — dozens of nearly identical shops, each no larger than a service elevator, tightly stacked up against one another like a deck of cards. These excursions usually followed Sunday prayers at our local gurdwara, the beating heart of a bustling Delhi bazaar. Around us, processions of herders displayed their livestock like prized show horses. Lilies curled and crisped under the hot Indian sun. A pack of parched stray dogs found relief in an unlatched water tanker. I would grip my father's hand tight as the butcher's blade sliced through the lamb's neck like butter, wincing at the blood and sinew.

We'd take the newspaper-wrapped meat to our kitchen at home, which always had a lingering aroma of ginger-garlic paste. My father would get to work immediately, putting on his too-small, turmeric-stained apron while theatrically describing aloud the dish he'd make. I, his sous chef, would start the prep: I'd wash the meat, trim the fat, and chop the ginger and garlic. Simon and Garfunkel would play on the record player my father had owned since he was a teenager. My mother, who didn't particularly enjoy cooking, but was a sport nonetheless, would hum along to the music and the symphony of pots and pans.

Lamb meat, being considerably more expensive than the more ubiquitous chicken, was usually reserved for special occasions in my parents' home. The garnet-toned rogan josh (literally translated to "hot oil") curry was a popular choice, as was biryani, bejeweled with wispy fried onions and threads of saffron. And on birthdays and festivals like Gurpurab, my father would spend the entire day making raan, a slow-cooked whole leg of lamb with the sirloin attached—its very purpose to feed a crowd. These special dinners concluded with bones being licked clean and marrows being sucked clear out, almost as a "thank you" to the cook for their labor of love.

As the years went by, growing pains started to set in. The joint cooking sessions that my father would wait all week for became a rare occurrence. When we did eat together, I'd shove food down as fast as I could and retreat to my room to scroll through Tumblr. My father and I somehow argued about everything . . . and yet nothing at all. My teenage angst came to be the unwelcome guest at our kitchen table.

A child of Green Revolution India in the 1960s, my father has had to fight for everything he's had his entire life. The loss of his father as a young boy meant he had to wear multiple hats to get by: becoming a tutor at 14, the sole breadwinner of his family at 17, and a father figure to his younger siblings all through. My privileged, sheltered upbringing couldn't have been more different from his. I could never understand why he forced us to finish every last grain of rice on our plates while we secretly wished we were eating Domino's instead; why he sneaked a mini bottle of rum into a restaurant instead of just ordering a cocktail; or chastised us for hanging out with the "wrong crowd," i.e., kids with poor grades.

He, on the other hand, couldn't relate to my unshakable fixation with the American way of life — a kind of obsession with an outdated version of the American middle-class dream. He'd winced as I chowed down fast food staples and slurped my way through sodas. It started to feel like our shared love of lamb was all we had left in common.

Then, I got accepted into college in America. And that night, my father made — you guessed it — lamb biryani. A few months later, I landed at JFK, and turning on my phone I found a tongue-in-cheek text from my father that read, "Toto, you're not in Kansas anymore."

While lamb was a theatrical experience back home, I found that many of my American friends didn't share my love for it. "Too gamey!" Too tough!" were responses I often heard. I recall ordering a lamb shank for dinner once at a trendy restaurant in Brooklyn (well out of my budget), and getting served a tiny, chewy portion of a lamb's hind leg. I felt let down. It tasted nothing like the lamb that I grew up on. The fat, which I'd known to beautifully emulsify into the braising liquid in thick, glossy streaks, now congealed around the meat like an ectoplasmic mass.

I struggled to find lamb dishes that captured the essence of my Pa's lamb recipes. I missed the way he tenderized his lamb with salt and acid and slow-cooked it over a low flame. The way he seasoned it more vigorously than other red meats to get rid of its natural gaminess.

If I felt the pull of familiar, nostalgic flavors, you couldn't tell from meeting me. When friends asked me for Indian restaurant recommendations, not wanting to be stereotyped, I'd quickly say, "Oh, I don't really go out for Indian food much." My Instagram feed was a uniform roster of pretty, clean-looking, "global" foods. I convinced myself that Indian home cooking, while delicious and far too complex to be pigeonholed under the reductive umbrella of "curry," just didn't photograph well enough to be on my neatly curated feed of babkas, uni-topped bowls, and croque madames. I felt like a walking paradox. An impostor, even.

When the pandemic hit last year, I was working at a magazine that would let me go before the summer ended. I already had a complicated relationship with my home country, and as a first-generation immigrant, the prospect of having to leave the U.S. made me break down in spurts. For so long, I had tethered my identity to New York, its culture. As most of my friends left the city, I felt alone, unsure about what I was working toward.

I began to yearn for the searing heat of the Indian sun. I longed to return to the butcher's market with my father. Then I did something completely uncharacteristic: I decided to cook lamb. I scoured the shelves of local supermarkets, only to find minced lamb or lamb sausages such as merguez. Occasionally, I would spot the isolated, lonely rack of New Zealand lamb, only to pick up a familiar hunk of ribeye instead.

Lamb on the bone was relatively hard to find in the city. Eventually, with the help of friends (and the internet), I was able to locate small vendors and specialty butcher's shops that sold Caribbean, Italian, and Indian restaurants their lamb. I started to make introductory lamb recipes over a slew of solo dinners. I found myself lulled by the invisible thread that connected me to my father's cooking. The smell of cardamom wafted through my studio apartment.

One day, tinged with the red of saffron, my fingers picked up my phone and texted my dad. "I miss you!" I wrote without any context whatsoever. We hadn't spoken in weeks.

Over the next couple of months, I'd FaceTime him once a week for a cooking lesson. I felt relieved to hear his loud, full-bellied laugh and his thick accent. Despite the time difference, he never missed a single session. He'd eat his burra kebabs for breakfast, and I, for dinner.

When I'd ask my father about cooking times and whether I should use my meat thermometer, he exclaimed, "pffft, thermometer-shermometer! I've never used one, and I've been cooking for 40 years!" According to him, you know a dish is ready when the meat feels like the fatty part of your palm or the oils begin to separate from your curry.

Like a lot of Asian fathers, Pa had a curious way of expressing love: He smiled rarely and didn't believe in grand displays. Instead, he took pleasure in cooking for us. This, to him, was the greatest gesture of love. It just took me years to understand this.

Slowly, my Instagram feed lit up with dishes that looked like they came out of my father's kitchen. I was starting to feel a little less lonely and a lot less homesick.

When my work visa expired last December, I moved back home. As I made the journey back — it had been four years since my last visit — I couldn't help wondering if I'd feel like a stranger in my own backyard. On the drive from the airport to my parents' home, I panicked as I caught myself forgetting the Hindi word for pumpkin. Oh, right . . . kaddu. I felt different. The city felt different. I almost didn't recognize the newly renovated road that led to our family home.

I was welcomed by the lilies on our porch, still crisping and curling despite a torrential downpour. The house was quiet, except for the familiar hum of the refrigerator. A discernible waft of ginger-garlic greeted me. I already knew what was cooking before even entering the kitchen. My father looked almost the same, if a little older. His salt-and-pepper hair was now more salt than pepper. He smiled sadly, embraced me without saying a word, then quietly said: "Go grab a plate."