The false promise of snake wine in Southeast Asia 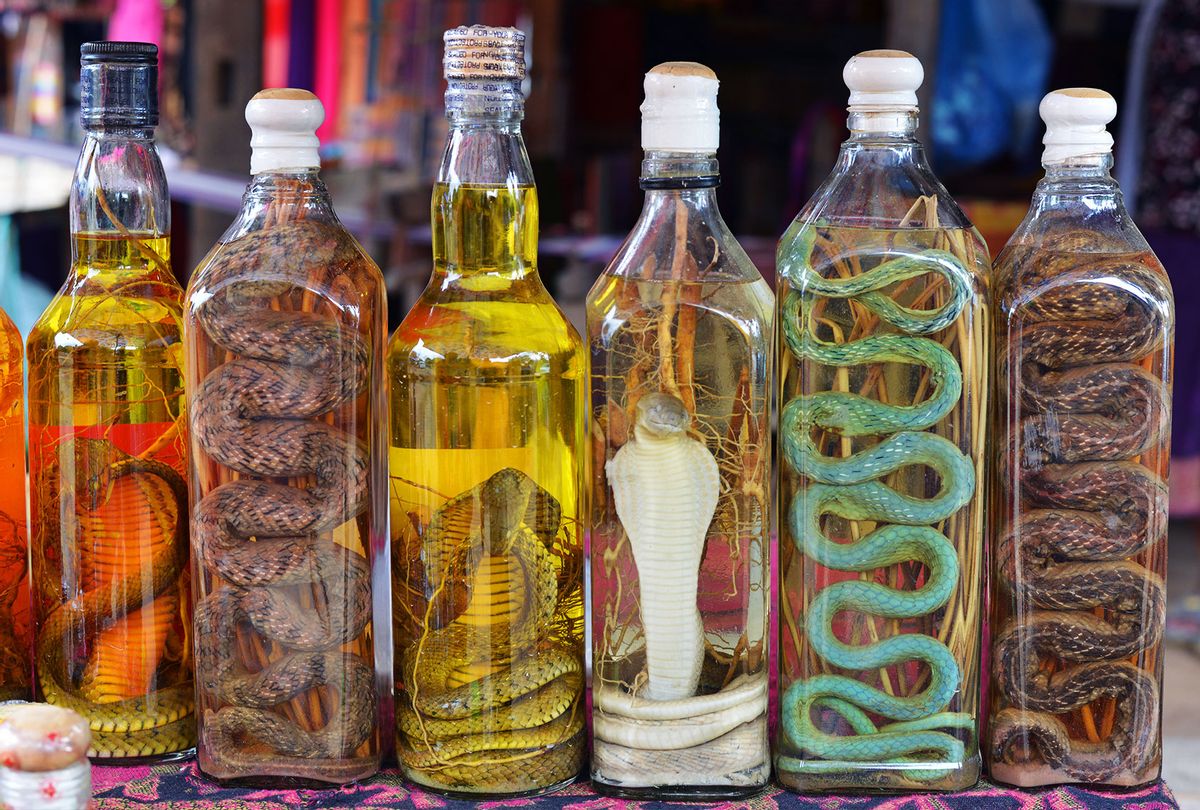 This article originally appeared on Geographical.

Snakes and alcohol have a surprisingly long and entwined history. The ancient Greeks used snake wine as a cure for retained placentas. In the past, European herbalists and natural healers mixed adders and calamus roots with vodka. In Brazil, snakes are steeped in cachaça (fermented sugar cane juice) and sold in the markets for religious purposes and as a cure for impotence, insect bites and rheumatism. And, in 2008, Texan authorities confiscated 411 bottles of vodka that contained baby rattlesnakes and arrested the man who was selling them because he didn't have a liquor license.

While alcoholic medicaments containing snakes have been used in different contexts across continents for centuries, the practice is now most common in Asia, in particular Cambodia, China, Japan, Korea, Laos, Taiwan, Thailand and Vietnam. When you walk along the streets or through the markets in Vietnam, it isn't unusual to find row upon row of bottled snake wine (known locally as ruou ran). Roadside stalls and age-old markets high up in the mountains, traditional pharmacies and modern chemists all sell bottles of snake wine. So do gift shops, bars, cafés, hotels and other outlets geared to tourists. The drink, which is based on traditional medicine, is made by placing a snake into a bottle and pouring in rice wine (although reportedly ethanol and vinegar are sometimes used, and even rubbing alcohol and formaldehyde, which pose serious health risks). Scorpions, geckos, centipedes and various herbs, such as ginseng, are often added for good measure.

Snake wine is variously touted as a cure for rheumatism, arthritis, lumbago, leprosy, excessive sweating, hair loss, dry skin, far-sightedness, exhaustion, flu, fever, pain and migraines, and as a general all-round tonic. Because snakes symbolise 'heat' and masculinity in Vietnamese culture, and are often associated with male potency, snake wine is also very popular and much coveted as a reputedly powerful aphrodisiac.

Traditional medicine has often used animals – or animal parts and products – as cures for various ailments, and reptiles are among the most popular sources of ingredients. Throughout the world, at least 284 reptile species are used in traditional folk medicine, and of these, 182 are listed on the International Union for Conservation of Nature's Red List, an indication that they are threatened with extinction.

Medicines extracted from local flora and fauna are often the only available remedies for many people who don't have access to modern drugs and medical care. And it's true that many traditional medicines have been shown to work well and that important modern drugs have been developed from them.

Snake venoms have been a particularly valuable medical resource, providing compounds for clinical trials and the development of diagnostic tools, as well as drugs used to treat hypertension, strokes, heart attacks and deep vein thrombosis, among others. In fact, millions of people have benefited, and billions of dollars have been made, from medicines arising from research into snake venom alone. In the USA, the FDA approved drugs Captopril, Integrilin and Aggrastat, used to treat heart conditions, are based on snake venom. This doesn't mean they actually contain venom, but rather a synthesized organic molecule that mimics their behavior. Captopril is based on an ingredient of the venom of the Brazilian viper; Integrilin is derived from a protein found in the venom of the southeastern pygmy rattlesnake; and Aggrastat is based on the venom of the African saw-scaled viper. The useful proteins in these venoms act as anticoagulants, naturally preventing platelets from sticking together. In addition to these approved drugs, many other snake venom components are now involved in preclinical or clinical trials for a variety of therapeutic applications.

When it comes to more traditional medicine, some Chinese snake oil, made from water snakes that consume fish, is rich in a key omega-3 fatty acid, and so could theoretically have some anti-inflammatory efficacy, either taken orally or applied as a liniment, according to an analysis reported in 1989 by nutrition-oriented physician Richard Kunin. Furthermore, at Japan's National Food Research Institute, a team of scientists led by Nobuya Shirai fed oil from the black-banded sea krait to mice and found that it promoted swimming endurance in the animals, whereas lard or even fish oil didn't. But to conclude from such research that there's value in humans drinking alcohol that contains snakes is surely a leap too far. Like the snake oil hawked by salesmen in the American Wild West as a cure for every ailment, it isn't likely to live up to the marketing hype.

The traditional assumption is that the value of snake wine as a remedy flows from the essence of the snake and its venomous potency. But venom, which is made up predominantly of proteins, is denatured (loses its characteristic structure and is therefore deactivated) in the presence of alcohol, which disrupts certain hydrogen bonds. What's more, in many cases, the snakes sold as highly venomous cobras are actually non-lethal common keelbacks that have been stretched out of shape to resemble cobras.

A study on the role of snake-derived remedies in Brazil points out that there is no way to tell how many of these exploited animals are wild-caught, what their conservation status is in each case, who uses the products, where exactly the animals are coming from and whether the animal-derived remedies can be replaced with plant-based ones (without then putting plant species and their environments at risk).

Conservationists such as Alice C. Hughes, a professor at the Chinese Academy of Sciences, believe that a similar situation occurs in Vietnam. As Hughes points out, while the snakes used in Asian snake wine come from both wild populations and snake farms, "no official statistics exist on the species identification or numbers involved. Nor have any long-term studies been done on the effect the trade is having on the population dynamics of the various snake species in Vietnam." One short-term study, however, conducted by husband and wife team Ruchira and Nilusha Somaweera in 2009, suggested that the snake-wine trade, combined with a growing local population and an increase in tourism, may ultimately make it difficult to maintain viable snake populations. Hughes further suggests "that this is especially true as the trade is almost entirely unregulated; making the impacts impossible to gauge, moderate or control."

That may become economically important, since some reports suggest that the rise in rat numbers and their subsequent destruction of rice crops (Vietnam is the world's second-largest exporter of rice) could, in part, be due to the poaching and trafficking of snakes. As Gordon Burghardt, a herpetologist and past president of the Animal Behavior Society, suggests: "While clearly more research is needed on the role of snakes in controlling rodent populations in agricultural areas, it is likely that they are an important part of a suite of predators." In Vietnam, where rice is king, maintaining viable snake populations might just help to save millions of kilos of rice and an untold number of livelihoods.

In July 2020, Vietnam tightened controls against the illegal wildlife trade to reduce the risk of future pandemics. While numerous conservation organisations and media outlets welcomed the new directive, it doesn't ban wildlife trade or consumption, nor will it stop the export, manufacturing, sale or consumption of snake wine. In response, non-governmental groups are taking matters into their own hands.

Education for Nature Vietnam (ENV) recently released "Safer with Science," a video that calls on the Vietnamese public and government to end the trade and consumption of wildlife in Vietnam. ENV is also encouraging traditional Chinese medicine shops to forego animal-based products in favor of plant-based alternatives in order to move toward a future that chooses modern medicine over wildlife products.

How much of the market depends on local communication and traditional users as opposed to export and tourist thrill seeking isn't known, but many of the bottles for sale in Vietnam have English-language labels and the product is easily available for sale online. As the Somaweeras observed concerning snake wine: "Although the tradition has existed for centuries in Asia, the trade is presumed to have grown at a startling rate since Southeast Asia opened its doors to the West and tourism has bloomed."

In 2011, an article in the Daily Mail claimed that in Vietnam, many of the wines, infused with the remains of "even endangered species included in the distilling process" supply both a "tasty tipple" and a "health tonic." Many guidebooks and travel sites suggest that snake wine drinking and/or purchasing is one of the "must do" experiences while visiting Vietnam. They appear to promote the practice as a chance to show off one's bravado, a way to get in touch with the real Vietnamese culture and generate an exotic story with which to impress listeners back home. Unfortunately, the same articles and websites don't usually explain that many Vietnamese are trying to halt the eating of wildlife, that the preparation of snake wine sometimes involves extreme cruelty and that the killing of endangered species for thrills should never be encouraged.

As Nguyen Tam Thanh, the animal welfare department manager for AnimalsAsia, points out, "Many tourists come to Vietnam and think that this kind of activity is part of Vietnamese culture. It is not part of modern Vietnam. In fact, it's largely a marketing strategy by the tourist business and should not be encouraged."