When I wanted to find my people, I found them in the "food women" living all across the globe

Author Hannah Howard found herself in the food world. Her people are the women found there, too 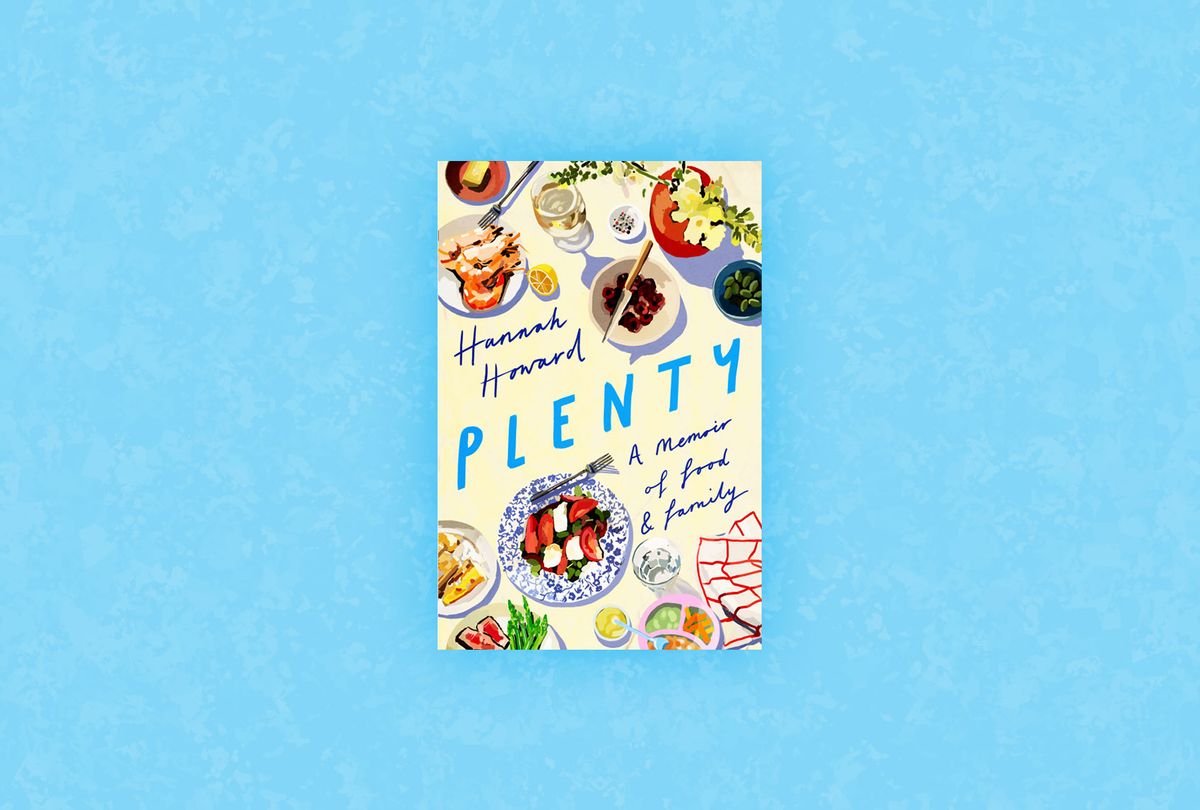 Plenty: A Memoir of Food and Family by Hannah Howard (Photo illustration by Salon/Little A)
--

An excerpt from "Plenty: A Memoir of Food and Family" by Hannah Howard. Available now on Amazon Prime. Available everywhere on Sept. 1

Finding my people has always felt crucial. Maybe it's because I'm an only child. Or because I was the only Jewish girl in my class at school. I've always had the sense of being a bit weird, a bit of an outsider—a feeling that slowly lessens, of course, the further I get from middle school.

In high school, my family moved from Baltimore to New Jersey. Everything was different—we traded a row house in the city, a place incessantly loud with traffic and shouting teenagers and mean old-lady neighbors, for an eerily quiet suburban house in Princeton, complete with a fenced-in yard. On the weekends, my parents would let me take NJ Transit, the commuter train, into Manhattan with my friends Jose, Rinku, and Cindy, a little band of misfits. When the conductor wasn't looking, we'd put our feet up on the blue vinyl of the seats in front of us, watching the bucolic green out the window morph into trash-strewn marshes and container-truck parking lots, and finally the black of the tunnel that meant we were entering the city. Emerging from Penn Station, hit by the smell of stale piss and those teeth-achingly sweet candied nuts for sale on every Midtown corner, the hard shine of skyscrapers bouncing sunlight above us, we felt miraculously grown up. In NYC, we weren't even a little bit weird.

One Sunday, we found ourselves paying the five-dollar entrance fee to an off-off-Broadway matinee. The show involved audience participation. "Raise your hand if you were cool in high school," one actor asked the crowd, his hair in the tallest Mohawk I had seen in real life. He was painted in glitter, and his chest sparkled in the spotlight. Nobody raised their hand. My friends and I exchanged conspiratorial glances. I took it as a sign from the universe: maybe I was going to be okay.

I've worked in food and hospitality since my first summer job, scooping gelato in Hoboken. When it was slow, I read Anthony Bourdain's Kitchen Confidential under the gelato cart's awning. I loved food entirely. But I also fell hard for that Bourdainian swagger—that machismo, the wild intensity that seemed intrinsic to the restaurant experience. Part of me saw the aggressive culture as a challenge. I was tough, too.

In real life, the adrenaline rush of a busy night of restaurant service was even better than I had read about; I started hostessing for a Michelin-starred French restaurant on the Upper West Side, and then took a job as a server in a cheese and wine bar. My new world was rough around the edges but sophisticated, the work hard in a physical and mental way I hadn't yet experienced. People talked a big game and expected a lot—no slouching over the host stand even eight hours into a shift, knowing which tables to joke with and which to leave in peace, understanding the difference between the Aligoté and the Albariño. The restaurants were run according to a strict hierarchy, a tradition dating back to Auguste Escoffier's military-inspired brigade system and stubbornly integrated into the restaurant world's psyche to this day. Through college, I felt as if I was living two lives: student and restaurant person.

I loved that second identity. I loved the people; they were brilliant, challenging, and totally different from me. I loved the physicality of a shift on my feet and how tired I felt by the end of it, how sore and how satisfied. How the work took me out of my own insufferable thoughts. I loved leaving a shift with a fat wad of cash in my pocket. I loved the cute bartenders who made me esoteric drinks after closing and told me outrageous stories. I loved being a part of something.

It's been seven years since I left my last restaurant manager job. I didn't leave the world of food entirely, just the working-in-a-restaurant-every-day-and-every-night life, which I found ultimately too exhausting and too brutal to sustain. What I had hoped would be creatively juicy instead felt like a grind, the same thing night after night after night. I've chosen to write about food instead. I draft press releases when an olive oil wins a prestigious award. I compose descriptions for wheels of Gouda that will be printed out and laminated, then hung on tiny hooks behind the cheese counter in various grocery stores. And I wrote a book about working my way through restaurants, falling in love with food and (the wrong) men, and recovering from a brutal eating disorder.

Foodland is notoriously male-dominated, in contrast with the domestic realm of cooking, which so often falls in the hands of women. Men run the restaurant world for many reasons: boys' club networks, male-centric kitchens where women are made to feel totally out of place, and male investors' preference for spending their money on other men who remind them of themselves—or who they want to be. But at the core of all the reasons men dominate our professional food landscape is the stubborn idea that important cooking and culinary innovation is the dominion of men.

It's not true, of course.

It's profoundly not true.

My own wonderful, complicated food mentors were men. There was Max McCalman, the first maître fromager in the US. I worked with Max at the now defunct Picholine on the Upper West Side, where he taught me all about Alpine cheeses made from the milk of cows that grazed in high mountain pastures. Max helped me land an internship at the Artisanal Premium Cheese Center, where I sprayed wheels of stinky Époisses de Bourgogne with brandy in the cheese caves until my fingers numbed from the cold and smelled of fermenting socks.

Max was followed by Steven Jenkins, who hired me to work with him at Fairway Market and rescued me from a sort of quarter-life crisis after I had quit my restaurant management job. He took me under his wing. We spent afternoons swigging extra-virgin olive oil straight from the bottle and reading from Madeleine Kamman's When French Women Cook. I busied myself writing endless descriptions for slightly different kinds of smoked salmon while Steve screamed at customs agents for detaining shipments of balsamic. When I had a question about our new jars of briny Basque boquerones that made me pucker in delight, he'd pull some book from his shelf for me to read. "If you lose it, I'll murder you," he'd say. "I'm not joking."

Where were my women mentors? I've worked side by side with some truly badass women, but they have been vastly outnumbered by men. These women have had biting senses of humor and serious talent; they have inspired, amazed, and surprised me. Some have gone on to become my friends. Why not my mentors? This is something I've thought about a lot. Most were my peers rather than authority figures, and the few who have risen to positions of power seemed to be more focused on safeguarding their own careers in a misogynistic system than in taking a young and (over)eager woman under their wing.

When I first started thinking about writing this book and identifying my women food heroes, I conjured up a list of chefs and entrepreneurs who'd hosted TV shows, appeared on magazine covers, and given keynotes at flashy events. I started researching and interviewing, but something left me cold.

I kept coming back to my friends—and to the people I wanted as friends. When it came to what I admired, it wasn't fame or money or any of the outward markers of success. Not that there is anything wrong with fame, money, and success. (I've spent a good portion of my life chasing these things!) But I realized that really delving into the story of women in the industry was a much more personal story for me. Food is so many things beyond awards and notoriety; it is a point of passion and connection, a way that we show our love and commitment to one another. It's a powerful way to cultivate community and family. The many people who make me believe in what we—all of us food women—are creating and preserving are so often in the trenches, working their asses off, living the food life, succeeding and failing and continuing to show up. They are peeling parsnips, driving tractors, fighting with spreadsheets, kneading dough, teaching other women how to chiffonade, and dreaming up change as I write these words. They are out there living full, complicated, and delicious lives of plenty that aren't being documented.

Plenty is about them. And for them. For you.

If you like this book excerpt as much as we do, consider checking out "Plenty: A Memoir of Food and Family" by Hannah Howard.