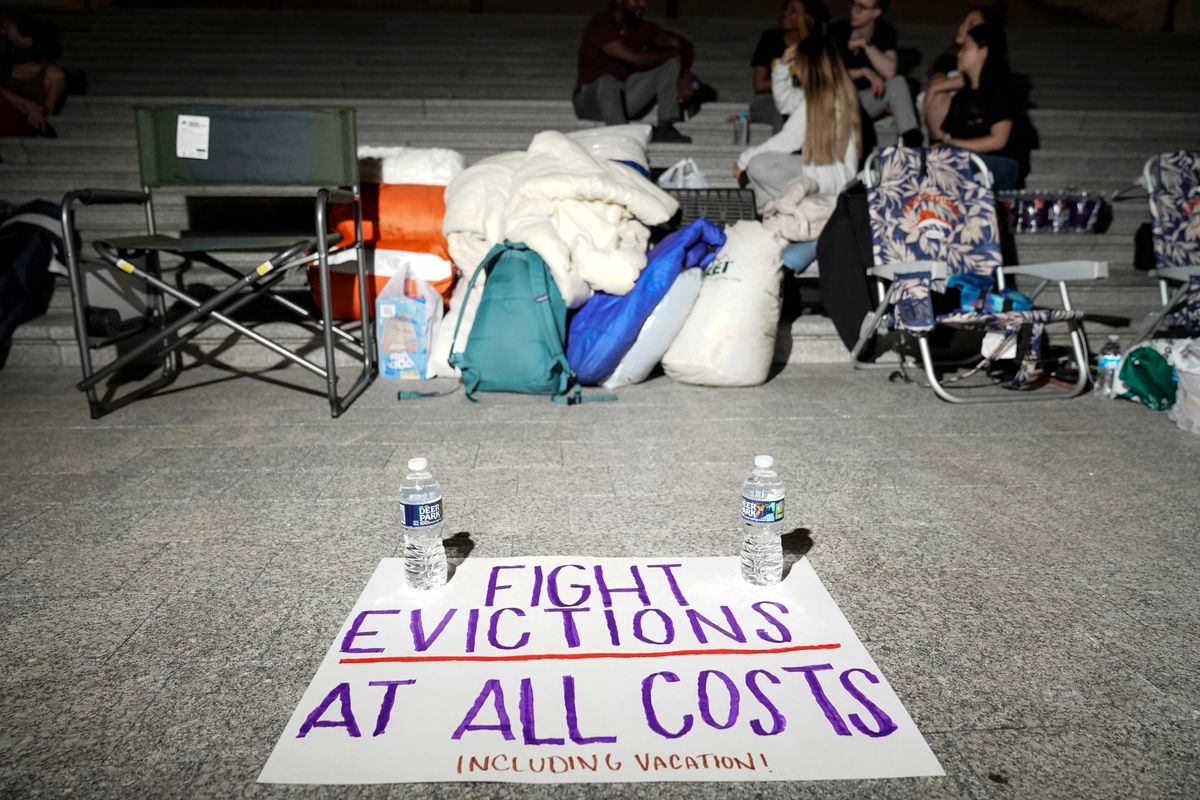 A sign calling for an extension to a federal eviction moratorium sits near Rep. Cori Bush (D-MO) as she spends the night outside the U.S. Capitol on July 31, 2021. (Getty Images)
--

As the homes of millions of renters across the U.S. were threatened this week by the White House's and Congress's refusal to extend the eviction moratorium put in place by the Centers for Disease Control and Prevention, the Democrats' inaction was directly benefiting some of the party's biggest backers in the real estate industry.

As Andrew Perez and Joel Warner reported in The Daily Poster on Tuesday, the chairman of both the real estate brokerage firm Marcus & Millichap and the real estate investment trust Essex Property Trust donated $1 million to the House Majority PAC on June 1, days after the CDC extended the moratorium until late June.

Chairman George Marcus also donated $263,400 that same month to a committee that benefits the Democratic Congressional Campaign Committee (DCCC) and House Speaker Nancy Pelosi's campaign, and contributed at least $6.5 million to PACs that work to elect Democrats to the Senate and House.

The Daily Poster suggested that while Marcus and his companies are wealthy—with the chairman part of a group of landlords whose personal fortunes increased by nearly $25 billion since the pandemic began—both Marcus & Millichap and Essex Property Trust stood to benefit from the eviction moratorium being allowed to expire.

Marcus & Millichap, the largest commercial real estate brokerage in North America, reported that it had a "tough year" in 2020, with sales transactions down 17.9% from 2019. Essex Property Trust, which owns or partially owns more than 60,000 apartments in California and Washington and donated $23.5 million to committees that opposed rent control measures in recent election cycles, reported it was directly impacted by the pandemic and the eviction moratorium.

The company is currently working "with residents to collect such cash delinquencies," and CEO Michael Schall said last week that it expects rent payments to return to normal levels "as more workers enter the workforce and eviction protections lapse."

The reporting bolstered a claim made by Rep. Ro Khanna (D-Calif.) on MSNBC last week as the Democrats failed to vote for an extension of the eviction moratorium, sparking outrage among progressives in Congress includingReps. Cori Bush (D-Mo.) and Alexandria Ocasio-Cortez (D-N.Y.).

"The reason they're not bringing it for a vote is because some Democrats privately have tried to kill this bill because of special interest of Realtors and other groups," Khanna said. "And it is unconscionable that we don't have a vote on the House floor, that we're protecting some members to kill this behind closed doors and aren't being transparent. It's just wrong."

"Real estate developer money unites the Democratic Party," tweeted Jackie Fielder of Daybreak PAC last week as it became clear the Democrats would not keep the moratorium from expiring.

Sara Myklebust of Georgetown University's Kalmanovitz Initiative for Labor and the Working Poor told The Daily Poster that Marcus's donations to Democratic candidates and PACs was part of "a pattern of landlords having close relationships as a result of money and influence."

"It's not shocking, because we have seen this pattern again and again," Myklebust told the outlet. "What is shocking is that millions of people are at risk of not just becoming homeless, but also getting a deadly disease."

As Common Dreams reported last week, 4.2 million people across the U.S. say they are likely to face an eviction or foreclosure in the near future, and research (pdf) by epidemiologists at the University of California in Los Angeles showed that unhoused people are up to 50% more likely to die from Covid-19 than people who aren't facing homelessness.

In addition to Marcus's financial backing of Democrats, The Daily Posterdetailed a $2.3 million donation from private equity firm The Blackstone Group to the Senate Majority PAC and the bundling of hundreds of thousands of dollars by lobbyists for real estate interests for the Democratic Senatorial Campaign Committee (DSCC).

Meanwhile, advocates for reinstating the moratorium have continued to demand Democrats—both in the White House and Congress—take immediate action to stave off the crisis.

"In our interconnected economy, it is simply not an option to abandon so many Americans to financial ruin," said Morris Pearl, chair of Patriotic Millionaires. "This isn't just bad for tenants behind on rent—in the long run it's bad for landlords too."

"Letting millions of Americans be evicted over the next few months would be a disaster for the entire country, and Congress and the White House have a responsibility to stop this looming catastrophe," Pearl added.