DOJ notes revealed: Trump's coup was longer in the making than we thought

Jeffrey Clark was no Justice Department rogue. He was doing a dry run for a coup long in the making 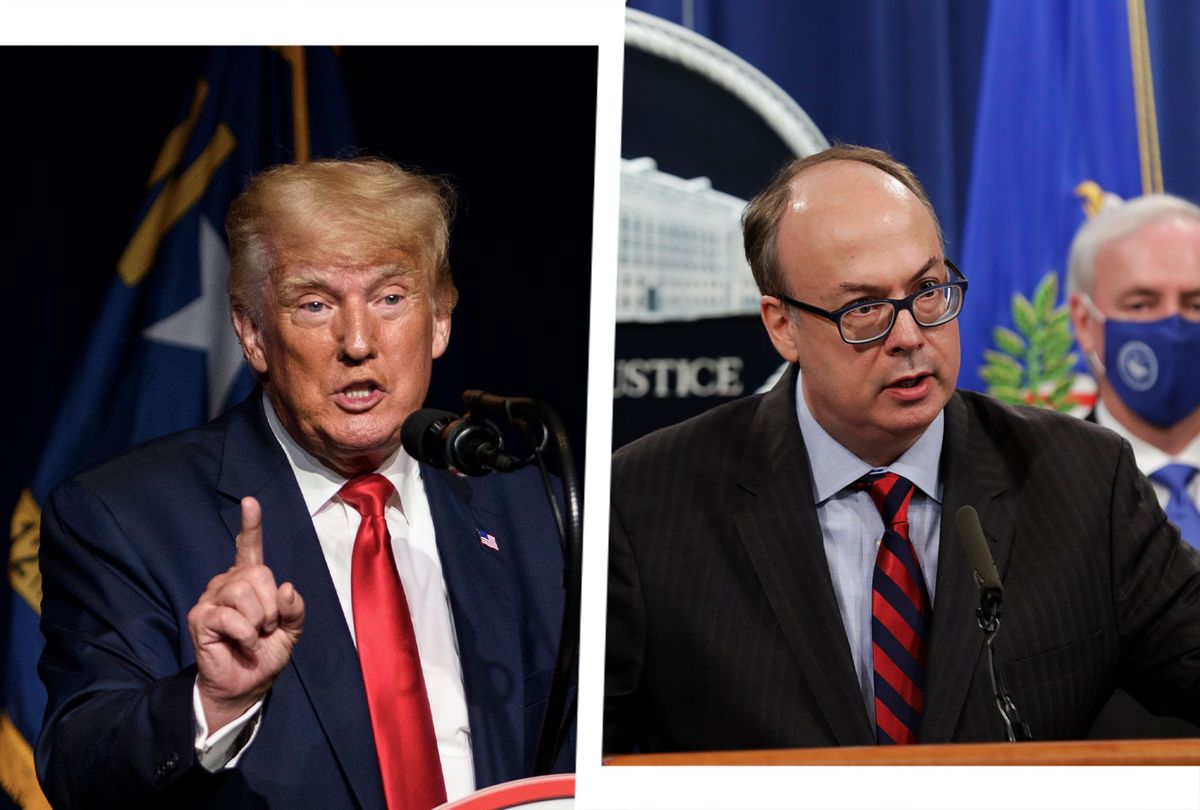 It's no secret that former President Donald Trump plotted to overturn the 2020 election if he lost. He had set up the scenario for months, even declaring at one point that the only way the Democrats could win the election was by stealing it. He'd done the same in 2016, telling his cheering crowd that he would only accept the results of the election if he won, and as it turned out, he didn't even accept that — insisting that Hillary Clinton stole the popular vote. Trump then formed an "election integrity commission" to investigate voter fraud in the election he won. (That commission was eventually abandoned after they were unable to find any proof of voter fraud.)

The election hysteria in 2020 over mail-in votes and Trump's ludicrous contention that any votes counted after midnight on Election Day were illegitimate would have been easy enough to just chalk up to Trump being a sore loser had Jan. 6 not happened. But the Big Lie was adopted by the GOP establishment for their own cynical, political reasons and Republicans continue to prop it up to this day. That has made it impossible to ignore and requires the attention of everyone who still values democracy and the rule of law. Clearly, we have not seen the end of this.

Just this week, we learned that the coup attempt engineered by Trump and his cronies was much more serious than the silly clown show run by the loony lawyers led by Rudy Giuliani or Trump's breathless fulminating about his "landslide" win being stolen from him. It turns out that the most alarming threat came from within the government itself and, had it succeeded, would have been the gravest constitutional crisis since the civil war.

According to notes turned over to the House Oversight Committee last week, after Attorney General Bill Barr left the Justice Department (DOJ) in late December of 2020, Trump pressured acting Attorney General Jeffrey Rosen to declare that "the election was corrupt and leave the rest to me and Republican congressmen." In other words, Trump wanted the DOJ to back his Big Lie, despite both Barr and Rosen telling him there was no fraud. (Trump even proclaimed, "You guys may not be following the Internet the way I do.") David Laufman, a former senior Justice Department official, told the Washington Post:

"These notes reveal that a sitting president, defeated in a free and fair election, personally and repeatedly pressured Justice Department leaders to help him foment a coup in a last-ditch attempt to cling to power. And that should shock the conscience of every American, regardless of political persuasion."

But it gets worse.

ABC News published a draft of a letter prepared by a Trump loyalist in the DOJ named Jeffrey Clark, a faceless GOP lawyer who had previously worked in the Bush administration and had been the head of the DOJ's civil division since September of 2020. On the same day that Trump was leaning on the acting AG to declare the election was "corrupt," Clark circulated a letter addressed to Georgia Gov. Brian Kemp and state legislative leaders, dishonestly claiming that the DOJ had "identified significant concerns that may have impacted the outcome of the election." The letter recommended that the Georgia legislature "convene in special session so that its legislators are in a position to take additional testimony, receive new evidence, and deliberate on the matter." Clark suggested in this letter that the legislature could refuse to accept the outcome of the election and select electors for Trump instead. This was the essence of the coup plot. According to NBC News, Clark had drafted similar letters to all six states that Trump was contending had been stolen: Arizona, Pennsylvania, Michigan, Wisconsin, Nevada and Georgia.

Thankfully, Rosen and his deputy Richard Donoghue, who recorded these events and turned his notes over to Congress, rejected Clark's outrageous attempts to overturn the election. But that was still not the end of it.

The New York Times reported last January that Trump had been introduced to Clark by a Pennsylvania politician who assured him that Clark was on the team. When Rosen rejected Clark's attempt to use the DOJ to foment a coup by enlisting Trump loyalists in the state legislatures, Clark went directly to Trump. The president subsequently threatened to replace Rosen with Clark. He even convened what was described as a bizarre "'Apprentice'-like meeting" with the two men in the White House that lasted for hours. Evidently, Trump was only dissuaded from doing this when he was told that the entire top leadership of the DOJ would resign if he did. According to the Times, Trump worried that mass resignations would distract attention from his election fraud claims.

It's easy to say now that "the system worked" but it was a very close thing, entirely dependent on the good-faith actions of certain members of the government. What if Trump had gone ahead and made Clark the acting attorney general, and Clark had sent those letters to state legislatures basically giving a green light from the DOJ to overturn the election results and illegitimately put Trump back in the White House? It's clear they were serious about doing it, and it's even clearer that this inane notion of state legislators rejecting the will of the voters has seriously gained currency on the right. This is not the last we will hear of it.

And what of this man Jeffrey Clark, Trump's willing accomplice in the attempted coup? Is there any accountability for him? Apparently not. He landed a cushy job as chief of litigation and director of strategy at the New Civil Liberties Alliance, a conservative-libertarian law firm. The conservative legal establishment takes care of its own — even when they plot to overthrow the government.

And there will almost certainly be a next time.

The New Yorker's Jane Mayer recently reported on all the Big Money Republicans who are backing the "Stop the Steal" movement around the country. (It's the usual suspects, proving once again that they are no more driven by principle and ideology than the average MAGA-hatted Trump fan.) She mentioned this in passing:

Few people noticed at the time, but in ... Bush v. Gore, Chief Justice William Rehnquist, along with Antonin Scalia and Clarence Thomas, hinted at a radical reading of the Constitution that, two decades later, undergirds many of the court challenges on behalf of Trump. In a concurring opinion, the Justices argued that state legislatures have the plenary power to run elections and can even pass laws giving themselves the right to appoint electors. Today, the so-called Independent Legislature Doctrine has informed Trump and the right's attempts to use Republican-dominated state legislatures to overrule the popular will. Nathaniel Persily, an election-law expert at Stanford, told me, "It's giving intellectual respectability to an otherwise insane, anti-democratic argument."

Jeffrey Clark was no rogue. He was doing a dry run for a coup long in the making.