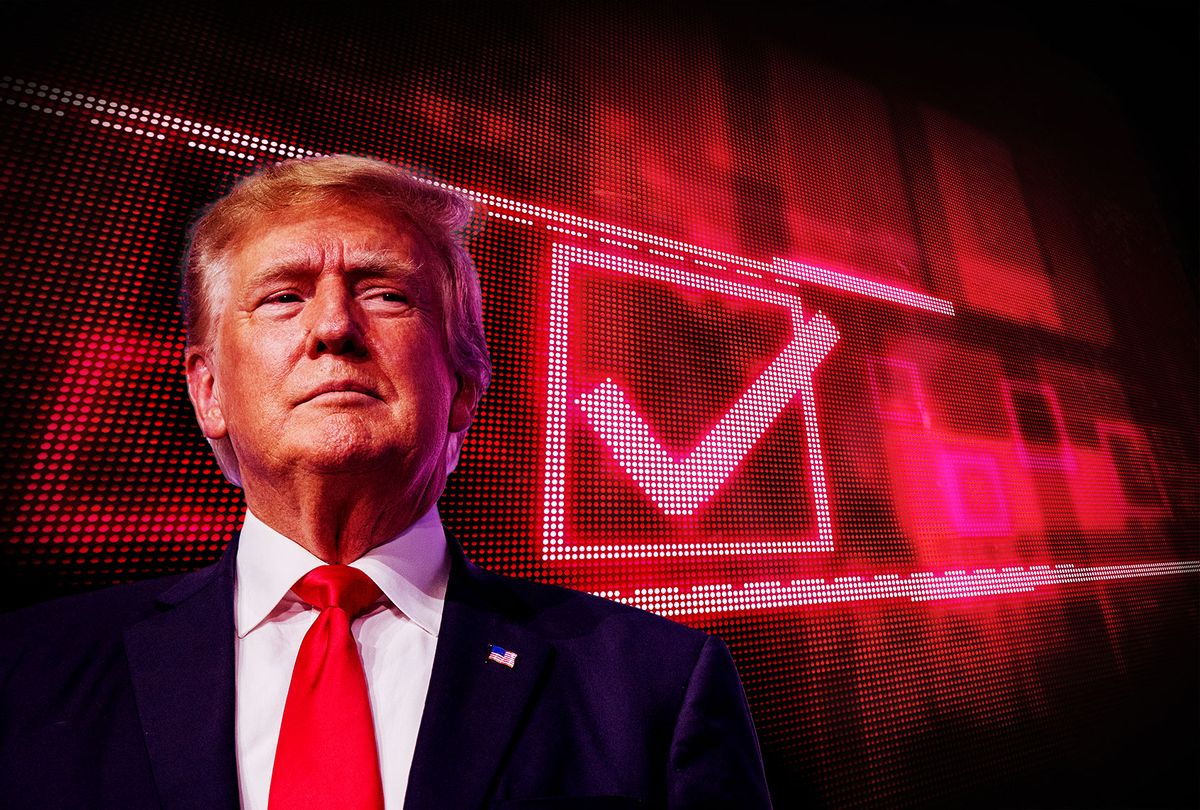 Earlier this year, the New York Times revealed that Donald Trump's campaign had extracted tens of millions of dollars in extra contributions from his supporters by surreptitiously signing them up for recurring donations, mostly by using pre-checked boxes in online forms. That practice was widely criticized and drew the attention of federal election officials, but it definitely hasn't stopped. Trump's fundraising appeals still appear to be automatically opting in donors for multiple contributions, which may partly account for $100 million-plus war chest the former president has accumulated since losing last year's election. Other Republican candidates and elected officials have followed along, embracing Trump's dubious fundraising practices just as they have embraced his politics.

Concerns around Trump's donation scheme first emerged in April, when a Times investigation found that the former president's campaign operation had routinely been signing up contributors for monthly — or even weekly — recurring contributions, through deliberately bewildering online forms and pre-checked authorizations. In the weeks before Election Day last fall, the Trump campaign rolled out an increasingly opaque array of these boxes, which featured huge blocks of boldface or all-caps text, full of aggressive phrasing, evidently intended to distract donors from the opt-out language in smaller, fainter type below.

This tactic, the Times reported, "ensnared scores of unsuspecting Trump loyalists — retirees, military veterans, nurses and even experienced political operatives. Soon, banks and credit card companies were inundated with fraud complaints from the president's own supporters about donations they had not intended to make, sometimes for thousands of dollars."

Trump's campaign was forced to refund $122.7 million as a result of 200,000 disputed transactions in 2020. Refunds to donors who exceed legal limits are not infrequent in political campaigns, but that was a vastly higher sum than the amount refunded by Joe Biden's campaign. This captured the attention of the Federal Election Commission (FEC), which in May sent a formal recommendation to Congress, asking for an outright ban on pre-checked recurring donation boxes.

That doesn't appear to have had made any meaningful impact on Trump's fundraising effort. In fact, Salon's reporting reveals that dozens of other Republican candidates and organizations now rely on pre-checked boxes to keep the money flowing, so much so that it can essentially be regarded as standard operating procedure on conservative fundrasing.

On donaldjtrump.com, where the former president is collecting funds for his Save America Joint Fundraising Committee, the website's contribution page automatically signs donors up for both monthly recurring donations and an additional mid-month donation — both of which match whatever contribution amount is initially specified by the donor.

"The Left is putting AMERICA LAST," one box reads in bold letters. "I need all hands on deck if we're going to SAVE AMERICA! My team is handing me an updated Donor List soon — will I see your name? Step up NOW to increase your impact by 400%!"

Below that paragraph is smaller, lighter text that reads: "Donate an additional [amount specified] automatically on 8/13." In both paragraphs, the separation between the pre-checked box, the boldface message and the line that authorizes a donation appears constructed to be intentionally confusing.

A number of experts on political fundraising said they viewed the pre-checked boxes as unethical or worse, noting their obvious potential to dupe potential donors who are less technologically savvy.

Michael Beckel, research director at Issue One, called the Trump campaign's continued reliance on recurring donations "outrageous," saying in an email exchange with Salon that such pre-checked boxes "have been shown to lead to consumer complaints and unhappy supporters." He continued, "Giving donors the choice to opt in to recurring donations is a much better business practice than stealthily signing people up for recurring donations."

The FEC's recommendation to Congress, Beckel added, "should be a clear sign to all candidates to cease this practice."

Ciara Torres-Spelliscy, a professor in the College of Law at Stetson University, also said by email that it was "outrageous that donaldjtrump.com is still running the pre-checked box gambit on their donors." She added, "It shows contempt for their financial supporters. If any donor wants to make a recurring donation, just have them opt in. Don't trick them into it."

Fred Wertheimer, president of Democracy 21, called the pre-checked boxes "ripoffs" in an interview with Salon. He noted that such tactics "invariably hit elderly people the most, because they are the ones who are more likely to contribute without knowing the ramifications of checkboxes or any similar kinds of gimmicks."

Salon reached out to Trump's team, which declined to respond to questions on whether the use of pre-checked boxes was a sound fundraising practice. The former president's director of communications, Taylor Budowich, sent a statement by email that did not address that issue:

With the help of millions of American Patriots, President Trump has raised a record-setting amount of money to help elect America First conservatives and win back the House and Senate for Republicans in the 2022 midterm elections. The liberals hate this, as they should, because their days of ruinous leadership are numbered.

Though Trump's messaging remains distinctive in terms of strident, overheated rhetoric, Salon's reporting makes clear that he is far from the only Republican to rely on pre-checked boxes in fundraising appeals.

In fact, a significant number of high-profile Republican senators employ the tactic, ranging across the GOP spectrum from loyal Trump supporters like Tom Cotton of Arkansas, Marsha Blackburn of Tennessee and Ron Johnson of Wisconsin to Trump skeptics like Mitt Romney of Utah, Susan Collins of Maine and Lisa Murkowski of Alaska. Three of the most prominent Trump backers in the House, Devin Nunes of California, Jim Jordan of Ohio and Matt Gaetz of Florida, also use pre-checked boxes.

Salon reached out to all of the lawmakers mentioned above for comment. Only Gaetz responded, writing by email: "While Democrats and Republicans alike 'check the box' for lobbyists and PACs on K street, I'm the only Republican in Congress who totally refuses their dirty money."

"I hope Salon criticizes me daily for funding my campaign only and directly from regular folks," the scandal-plagued Florida congressman added, without comment on his use of pre-checked boxes.

"This is an unfair, misleading, and predatory practice, said Noah Bookbinder, executive director of Citizens for Responsibility and Ethics in Washington (CREW), in an interview with Salon. "But at the moment, it's a legal one."

Bookbinder continued, "You would hope that after the kind of attention this received four months ago, campaigns and parties would just stop doing it. But where that doesn't seem to be the case, I think there would need to be agency or legal action."

Republican lawmakers, Bookbinder suggested, are taking cues from Trump's open disregard for fundraising ethics. "You have the tone being set by organizations that are working for Donald Trump, who has shown this kind of contempt for any type of rules or traditions meant to make things more fair," he said. "This seems to be a natural outgrowth of that."

On campaign finance ethics, the FEC has been described as "notoriously dysfunctional" by one of its commissioners. The agency has frequently bogged down in partisan bickering that stalls or kills efforts to crack down on violations of the law. In fact, from July to December of 2020, under the Trump administration, the FEC lacked a quorum sufficient even to hold meetings, generating a massive backlog of 446 unresolved cases.

"The usual situation has been that the Democratic FEC commissioners have tried to enforce campaign finance law against both Democrats and Republicans, have tried to enforce it somewhat stringently," a senior director for trial litigation and chief of staff at the Campaign Legal Center told NPR last year. "And the Republican commissioners have generally opposed enforcement of the law, regardless of whether the law-breaker was a Republican group or a Democratic group."

On the subject of pre-checked donation boxes, however, the FEC's recommendation to Congress was unanimous. Democratic commissioner Ellen L. Weintraub was principal author of the letter released in May, urging Congress to set rules for those soliciting political contributions:

To a considerable degree, the pre-checked box tactic was pioneered by WinRed, a for-profit company that serves as the RNC's designated fundraising platform. In April, four state attorneys generals opened a probe into multiple platforms' donation tactics, including those of WinRed and its Democratic counterpart, ActBlue, over their use of pre-checked boxes. ActBlue later told the Times it had begun phasing pre-checked boxes out of its platform. This appears to be true: The Democratic Senatorial Campaign Committee, the Democratic Congressional Campaign Committee and the Democratic National Committee do not automatically opt donors into recurring donations.

WinRed has accused the attorneys general of "exploiting their positions of power for partisan gain."

"​​Only when Republicans began challenging the Democrats' long-held advantage in online fund-raising did these Democrat Attorneys General activate," WinRed told The Washington Examiner in July. "It's troubling to see these AGs attempt to use the power of their offices for the purpose of helping the Democrat Party."

WinRed CEO Gerrit Lansing did not respond to Salon's request for a comment.

A legislative push against this tactic has also begun on Capitol Hill. Sens. Amy Klobuchar, D-Minn., and Dick Durbin, D-Ill., recently announced the introduction of a bill that would prohibit the use of pre-checked recurring donation boxes once and for all. "Following the FEC's unanimous vote," Klobuchar wrote, "it's clear we should take action to ban this practice and ensure contributors are fully informed. This legislation will do just that."