Give Joe Biden credit — he sees the danger. But "moderate" Democrats have no realistic way to beat back fascism 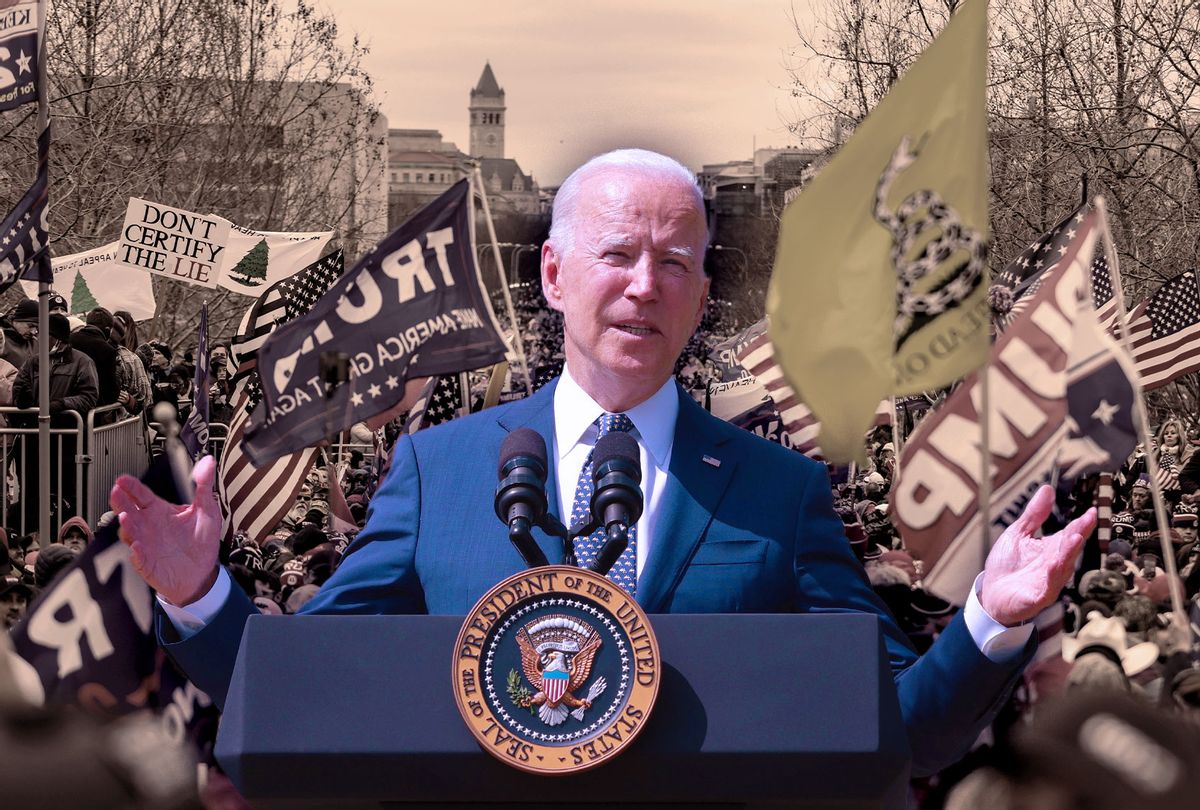 Jane Mayer's article in The New Yorker last week, "The Big Money Behind the Big Lie," starkly illuminates how forces aligned with Donald Trump have been upping the ante all year with hyperactive strategies that could enable Republican leaders to choke off democracy, ensuring that Trump or another GOP candidate captures the presidency in 2024. The piece runs close to 10,000 words, but the main takeaway could be summed up in just a few: Wake up! Core elements of U.S. democracy really could disappear soon.

Anti-democratic ducks are being lined up in Republican-run state legislatures to deliver the White House to the party nominee. Driven by Trumpian mindsets, it's a scenario that could become a dystopian reality.

In early June, the New America organization issued a Statement of Concern, signed by 199 eminent "scholars of democracy" in the United States, warning that "Republican-led state legislatures across the country have in recent months proposed or implemented what we consider radical changes to core electoral procedures in response to unproven and intentionally destructive allegations of a stolen election. Collectively, these initiatives are transforming several states into political systems that no longer meet the minimum conditions for free and fair elections. Hence, our entire democracy is now at risk."

The statement included a sentence that flagged an ominous, even fascistic, cloud on the horizon: "Statutory changes in large key electoral battleground states are dangerously politicizing the process of electoral administration, with Republican-controlled legislatures giving themselves the power to override electoral outcomes on unproven allegations should Democrats win more votes."

New America, which calls itself "a think and action tank," deserves praise for issuing the statement. Yet, overall, the organization typifies a political establishment that arguably does more to fuel Trumpism than to hinder it.

The CEO of New America, Anne-Marie Slaughter, did her part to oil the Democratic Party's machinery of neoliberalism as the State Department's director of policy planning for the first two years of the Obama administration. Later, she wrote and spoke widely to call for U.S. warfare in Libya and Syria. Like Hillary Clinton, who was her patron as secretary of state, Slaughter has been a prominent promoter of what is sometimes glibly labeled a "muscular" foreign policy.

Slaughter's zeal for U.S. military intervention — boosting Pentagon budgets that enrich war contractors while shortchanging domestic social programs — fits neatly with an overall neoliberal model of reverence for maximizing corporate profits. It's a sensibility that Slaughter presumably brought to her stint on the board of directors of the McDonald's Corporation before getting to the State Department.

Members of New America's board of directors, such as media foreign-policy darling Fareed Zakaria and ubiquitous New York Times pundit David Brooks, have long echoed pro-war conventional wisdom. But hawkishness from elites has worn thin for working-class communities in the wake of combat deaths, injuries and psychological traumas. Research indicates that Clinton's militaristic persona helped Trump defeat her in 2016, with "a significant and meaningful relationship between a community's rate of military sacrifice and its support for Trump." More than four years later, the liberal establishment's support for endless war is unabated as the U.S. continues to routinely bomb several countries.

As for the ongoing class war at home, the current Democratic brand of mild liberalism still refuses to give a forthright answer to a pivotal question: "Which side are you on?" The party's usual answer, in effect, is "both sides" — or, more commonly, to pretend that class war isn't really happening. ("Can't we all just get along?")

Certainly the Biden administration has taken important steps — such as expanding the child tax credit and regulatory moves against corporate monopolies — to reduce extremes of economic unfairness. And it's true that Biden has turned to Keynesian public investment. But the structures of neoliberalism are still largely in place, and the inroads against it have been incremental. With a closely divided Congress and a likely GOP takeover of the House in 17 months, the advances are temporary and precarious.

An affirmative program for progressive change — to substantially improve the economic and social conditions of people's daily lives — will be essential for mobilizing voter turnout and preventing the Republican Party from seizing control of the federal government. GOP obstructionism on Capitol Hill is no excuse when Democratic leaders, as happens all too often, fail to clearly set imperative goals and go all-out to achieve them in tandem with grassroots movements. A prime example is Biden's refusal to use his authority to cancel student loan debt.

Meanwhile, Trump and associates are raising plenty of cash. During the spring, some news reports claimed that Trump was losing his hold on devotees — a Washington Post headline in May declared, "Trump is sliding toward online irrelevance" — but such wishful thinking has been eclipsed by recent information. Trump's online fundraising brought in $56 million during the first half of this year, and his political committees report having $102 million in the bank. Those figures "underscore the profound reach of Trump's fundraising power," Politico reported as this month began. Trump is maintaining "a massive online donor network that he could lean on should he wage a 2024 comeback bid."

A vital challenge for progressives is not only to block Republican agendas but also to effectively campaign for policy changes that go far beyond the talking points of current Democratic leaders offering to tinker with the status quo. Merely promising a kinder, gentler version of grim social realities simply won't be enough to counter the faux populism of a neofascist Republican Party.