Facebook puts profits over people: Why the social media giant is playing shell games with the White House 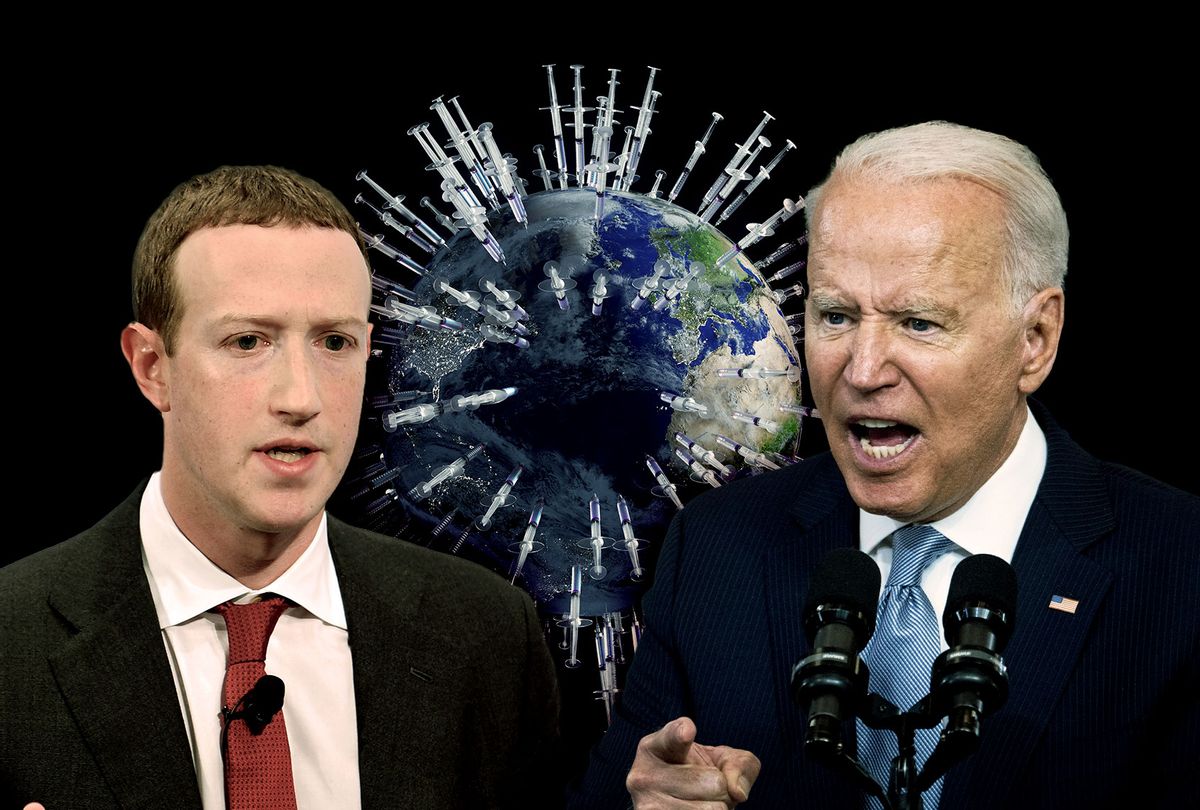 The White House is fed up with Facebook over the vaccine disinformation fight, so much so that they're feeding stories to the New York Times portraying the social media network's top brass as stonewalling jackasses. And fairly so, as anyone who has actually witnessed the spread of anti-vaccine talking points on social media can attest.

The latest piece, which was published Tuesday morning, is a frustrating read. Mike Gwin, a White House spokesperson, accuses Facebook of not living "up to our, or their own, standards and have actively elevated content on their platforms that misleads the American people." For example, sources tell the New York Times that the White House "asked for data on how often misinformation was viewed and spread," but "the company said it couldn't provide that kind of data." There is also the widespread problem of "content that wasn't explicitly false, such as posts that cast doubt about vaccines but don't clearly violate the social network's rules on health misinformation." For instance, many vaccine misinformers — Tucker Carlson at Fox News is a prominent example — skirt the line with the "just asking questions" gambit (i.e. JAQ-ing off), where lies about vaccine safety and efficacy are framed as "questions" so that they can spread rapidly while giving the anti-vaccine liars cover to say they weren't lying exactly, just "asking questions" about it.

Facebook, meanwhile, sounds more interested in deflection than tackling the problem, responding "to some requests for information by talking about vaccine promotion strategies." But everyone — especially the folks at Facebook, who have the data — should know that people who are engaged with disinformation aren't going to be easily lured back to reality with bland PSAs about how to get a vaccine. Trying to fight lurid lies with boring truths is about as helpful as trying to put out the California wildfires by sneezing on them.

Ultimately, however, it's not a mystery as to why Facebook is reluctant to do more to beat back vaccine disinformation on their website. Doing so necessarily means getting aggressive with a fleet of right-wing disinformation troops, including power players like Fox News, who share anti-vaccine clips on the site. And Facebook has a long history of not wanting to tangle with those fools. They hate hearing complaints about it and, let's face it, right-wing lies are profitable.

Sheera Frenkel, one of the co-authors of the new book "An Ugly Truth: Inside Facebook's Battle for Domination," was on Pod Save America Monday evening and she explained how Facebook kowtows to right-wing misinformers at the expense of people who are trying to share accurate information online. As she explains, Facebook adjusted its algorithm to "dial up the amount of trustworthy news people see" in the run-up to the 2020 election. "And this kind of lasts for a month before they reverse course on it," she said, just in time for the lies about the "stolen" election to start flooding the site.

"The real reason" Facebook let the conspiracy theorists get their audience back, she argued, "is that they were getting a ton of complaints." Frenkel concluded: "Facebook is really afraid of accusations of conservative bias."

Whatever high-minded "free speech" rationalizations that Facebook head Mark Zuckerberg or other top brass may want to spit out, the likelier story is the boring old profit motive. As a Pew survey released earlier this summer shows, while both Democratic and Republican voters have Facebook accounts in roughly equal numbers, Facebook's relationship with its conservative user base is a lot stronger, as "Democrats are considerably more likely than Republicans to use many other social media platforms." Dialing down the disinformation that Republican users crave could threaten the current exclusivity that Facebook enjoys with that crowd.

And, as much as they avoid admitting it, Facebook full well knows that right-wing lies drive up engagement, keeping people on their site longer and driving up ad revenue.

As Wired reported in March, NYU researchers found that "news organizations that regularly publish false material get up to 65 percent more engagement than ones that don't." But here's the trick: That's only if that misinformation is right-wing. There are left-leaning sites that publish false information, but when they do so, it drives down engagement. Right-wing lies, however, are engagement machines. Republican voters are like rats pushing the cocaine button, constantly hitting refresh on fake news, always hungry for more.

"What we find is that among the far right, in particular, misinformation is more engaging than non-misinformation," Laura Edelson, one of the researchers, told Wired.

The Facebook Top 10 Twitter account is a thorn in Facebook's side because they use the company's own data to highlight how, on a daily basis, the top posts tend to come from right-wing sources that are, at best, lackadaisical with the truth. Facebook's top posters are frequently right-wing provocateurs like Ben Shapiro, Sean Hannity, Steven Crowder, Candace Owens, and Diamond and Silk — all of whom regularly put up posts discouraging vaccination, winking at or openly promoting anti-vaccination conspiracy theories, and letting their loyal fans rave about how vaccines are the devil in comments. While these pundits often skirt the line by hinting at anti-vaccine lies instead of stating them outright, the overall message to their audience is quite clear: Getting vaccinated makes you a bad conservative.

Now conservatives are paying the price for this infatuation with disinformation. COVID-19 rates are soaring in red states, tearing through communities of conservatives who thought they were "owning the liberals" by refusing the shots. Unfortunately, it's not just affecting the people who would rather wallow in right-wing lies than take in basic health information. Republican Gov. Greg Abbott is asking Texans to delay needed medical care in order to keep beds open for the surge of COVID-19 patients, the vast majority of whom are unvaccinated. Mask recommendations and mandates are coming back in some communities, as a stopgap measure because so many people are still unvaccinated. Even vaccinated people are starting to worry about breakthrough infections, though they remain relatively rare and are typically not dangerous. And children under 12, who cannot be vaccinated yet, are in direct danger from unvaccinated people, through no fault of their own.

But more vigorous policing of the way the right is using Facebook to spread vaccine disinformation would mean more whining from conservatives about "cancel culture," and possibly drive down engagement on the site — and therefore drive down profit. So instead, Facebook is playing games with the White House's efforts to crack down on anti-vaccine conspiracy theories. Meanwhile, hospital beds keep filling up, crowded with people who preferred Dr. Facebook over reality-based medical information.