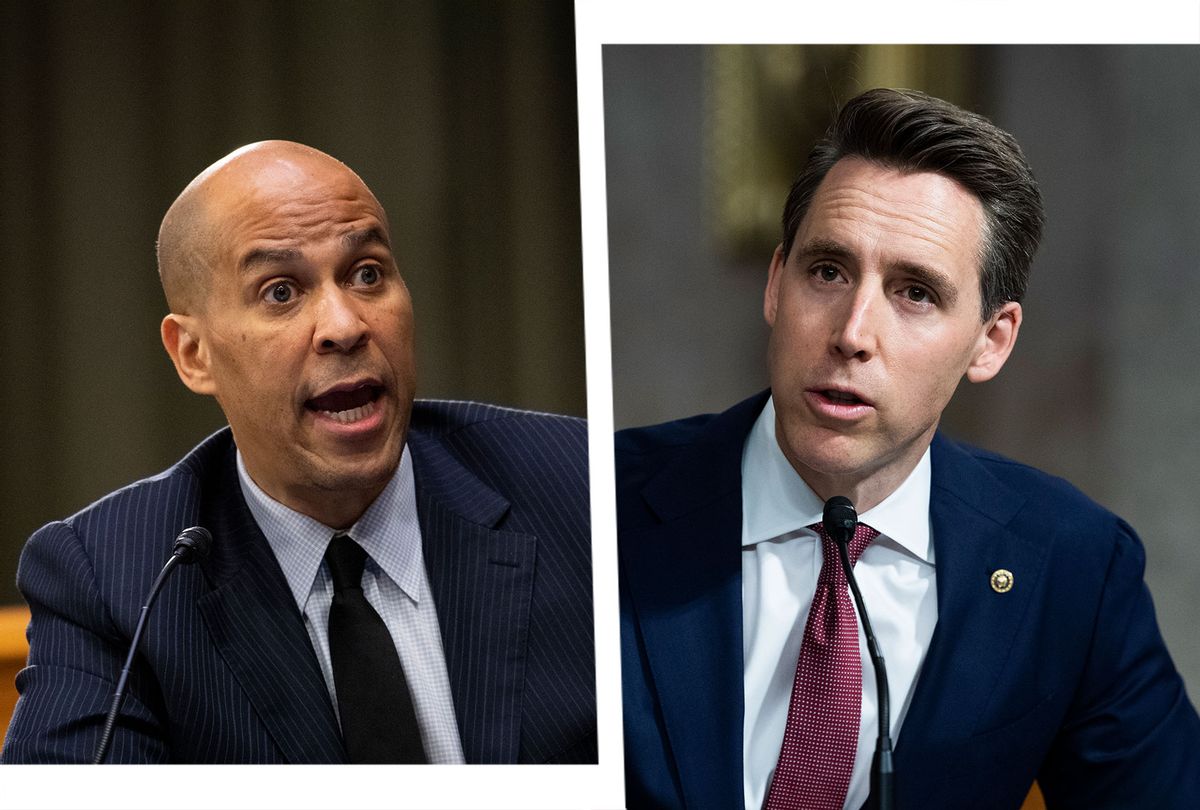 The Senate early Wednesday morning voted to advance a $3.5 trillion budget resolution that is expected to shrink in the coming weeks, but not before a marathon overnight "vote-a-rama" session in which Democrats distanced themselves from activist calls to "defund the police."

Senate Democrats moved forward with their bid to pass a multi-trillion spending bill with a simple majority using the budget reconciliation process, which requires the chamber to hold a lengthy procedural session where senators can offer an unlimited number of amendments known as "vote-a-rama." The session stretched more than 14 hours from Tuesday night into the wee hours of Wednesday morning as the Senate voted on more than two dozen amendments, which are non-binding but are typically used by senators to force their opponents to take positions on controversial issues.

Republicans sought to use the session to force Democrats to vote on issues related to the police, critical race theory and the Green New Deal, among others. Sen. Tommy Tuberville, R-Ala., introduced an amendment to punish "woke" cities that "cancel the police department" in an attempt to goad Democrats over "the dangerous rhetoric and policies of the ''defund the police movement." Republicans since last year have tried to tie calls to move local funding from police departments to social services by a few members of Congress like Reps. Cori Bush, D-Mo., and Rashida Tlaib, D-Mich., to allege that the entire party is anti-police even though the party does not support defunding the police and President Joe Biden has pushed for more funding for police amid GOP attacks.

Every Senate Democrat voted in favor of Tuberville's nonbinding amendment to ban federal funds from cities that "defund" their police departments. Sen. Cory Booker, D-N.J., called the vote a "gift" to Democrats.

"I am so excited," a pumped-up Booker exclaimed after Tuberville introduced the amendment. "This is perhaps the highlight of this long and painful and torturous night… If it wasn't complete abdication of Senate procedures and esteem, I would walk over there and hug my colleague from Alabama. Because there's some people who have said that there are members of this deliberative body that want to 'defund' the police, to my horror. And now this senator is giving us a gift to finally, once and for all, we can put to bed this scurrilous accusation."

Booker urged every member of his party to "sashay" to vote in favor of the amendment to "put to rest the lies."

"I'm sure I will see no political ads attacking anybody here over defund the police," Booker quipped, jokingly proposing an addition to the amendment that says every senator also "believes in God, country, and apple pie."

During the vote, Booker came over and literally hugged Tuberville.

Some Democrats praised Booker for blowing up the Republican talking points. "There goes the GOP's narrative," tweeted longtime Democratic operative Jesse Ferguson, as if the narrative had actually been based on senators' policy positions.

While Democrats have been eager to distance themselves from the "defund the police" rhetoric that Republicans have blamed for murder increases in cities like New York, which just saw one of the biggest declines in violent crime in history last month,  homicides also rose amid the pandemic in cities that actually increased their police budgets. Some prominent Democrats have blamed the "defund the police" rhetoric for their losses in the House and in local races in November and are keen to pour water on the narrative, the performative vote may have alienated some progressive activists that have been critical in helping Democrats win certain areas of the country.

"Make no mistake, this is a universal attempt to silence the demands from the streets," Black Lives Matter said in a statement on Twitter. "This is an attempt to put our movement 'in check.' No one, we repeat NO ONE, had the back of our revolutionary movement in the Senate."

Democrats similarly rallied around a nonbinding amendment proposed by Sen. Josh Hawley, R-Mo., of January 6 infamy, that called to hire 100,000 new police officers around the country.

Hawley accused Biden and Democrats of using the budget bill to lay the "groundwork for their far-left agenda," like the "Green New Deal," even though Biden has opposed the Green New Deal and urged cities to use pandemic relief funds to hire police officers "even above pre-pandemic levels."

Sen. Dick Durbin, D-Ill., praised Hawley's amendment by noting that it mirrored a police-hiring program created by Biden when he was in the Senate. Durbin added that 37 Senate Democrats sent a letter to the Appropriations Committee seeking more money to hire police but not a single Republican signed on.

Activists again slammed the Democrats over the vote.

"There is profound consensus in both mainstream political parties to expand the greatest system of mass human caging in modern world history," tweeted Alec Karakatsanis, the executive director of the DC-based nonprofit Civil Rights Corps. "[T]he 90% of the millions caged and separated families are poor, and U.S. cages Black people 6 times the rate of South Africa during Apartheid."

Sen. Bernie Sanders, I-Vt., said he had "no problem" backing the amendment because it "has nothing to do with the Green New Deal."

"These are generally nonsense votes about political positioning and not policy but the frequency with which Manchin has sided with [Republicans] tonight isn't the best omen headed into reconciliation," warned David Dayen, the executive editor of The American Prospect.

Indeed, after the Senate finally voted down party lines to advance the actual budget resolution, Manchin issued a statement raising "serious concerns about the grave consequences" of passing a $3.5 trillion bill.

The bill will be written by Senate committees in the coming weeks but the chamber voted to move forward with a blueprint that calls to expand Medicaid to states left out under the Obamacare expansion, extend insurance subsidies and lower the Medicare eligibility age to 60 while adding coverage for hearing, dental and vision. The bill would also provide billions for tuition-free pre-K and community college, paid family leave, a Child Tax Credit extension, and green energy, among other measures. Democrats also plan to include immigration reform that could provide green cards and a path to citizenship for millions of undocumented people but it's unclear if the provision will be allowed under Senate rules governing the budget reconciliation process.

Manchin, who previously took issue with the climate provisions in the bill, argued that the amount of spending was unnecessary and "irresponsible."

Sen. Kyrsten Sinema, D-Ariz., has also vowed to oppose a bill that includes $3.5 trillion in spending, which was a compromise number to begin with after Sanders and progressives called for over $6 trillion. Some House moderates have also expressed skepticism about the bill.

Republicans are now aiming to convince Manchin and Sinema to block at least parts of the legislation since they can't torpedo it themselves.

"Their vote is the whole enchilada," Thune told Politico. "If they want to stop this thing, they can. And I hope they will use that power."

Sen. Susan Collins, R-Maine, told the outlet that "each of them is fiscally responsible and are people of courage. And so I hope they will break on this enormous expansion of government."

But Manchin and Sinema were also the biggest Democratic proponents of the bipartisan physical infrastructure bill passed by the Senate this week and House progressives have vowed to blow up the deal unless the Senate also passes a large budget bill.

The Congressional Progressive Caucus sent a letter to House Speaker Nancy Pelosi, D-Calif., and Senate Majority Leader Chuck Schumer, D-N.Y., vowing that most of their 96 members will oppose the bipartisan bill unless the Senate passes a reconciliation bill "acceptable" to its members.

"Our Caucus has been clear: Congress must invest in infrastructure that takes on the climate crisis and meets the needs of working families," the caucus said in a statement. "CPC members won't support a bipartisan bill without a bold reconciliation bill to advance our priorities."