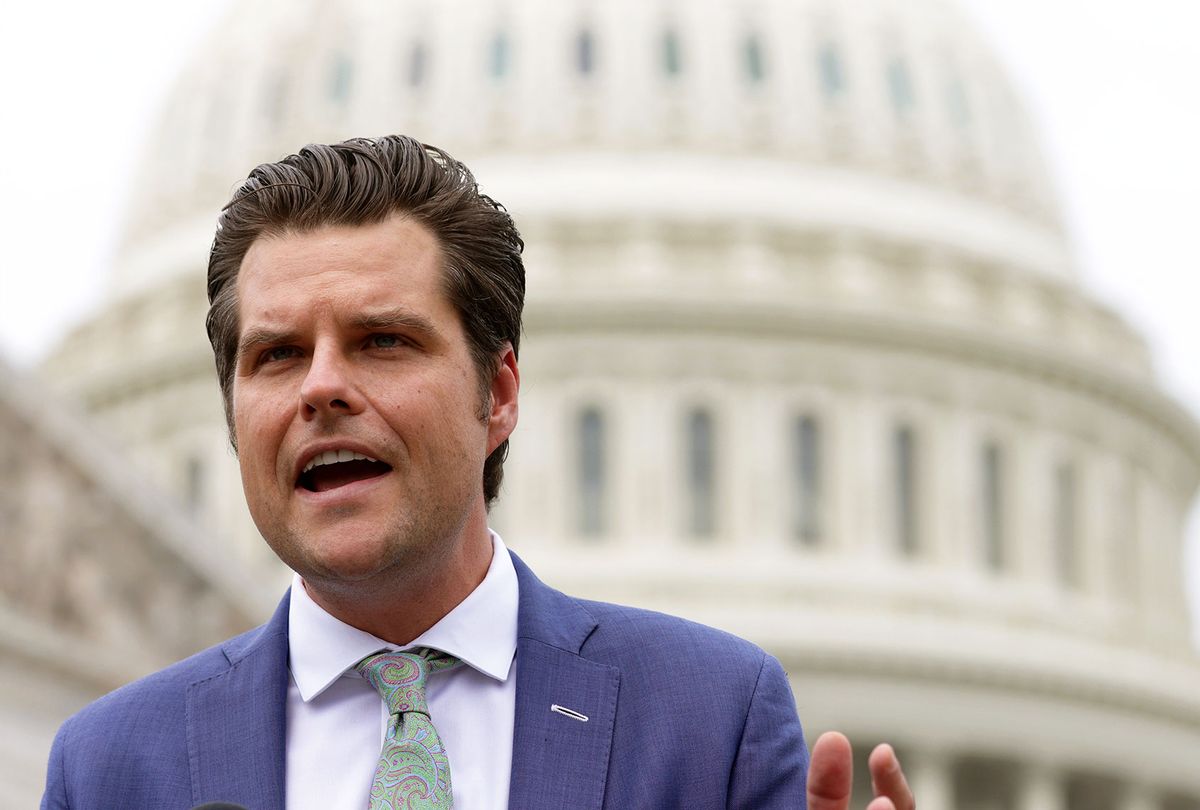 The longtime "wingman" of Rep. Matt Gaetz's, R-Fla. is reportedly cooperating with federal prosecutors and has already turned over "thousands" of files that could implicate the Florida congressman as inappropriately engaged with a 17-year-old girl.

Gaetz is reportedly facing a federal investigation into possible sex trafficking of a minor but has denied any wrongdoing and has not been charged with a crime. But his longtime friend and former Florida tax collector Joel Greenberg, who pleaded guilty in May to numerous federal charges including child sex trafficking, has given investigators "thousands" of photos and videos, text messages, access to his social media accounts, and years of Venmo and Cash App transactions as part of his cooperation agreement, according to ABC News. Messages reviewed by ABC News showed that Greenberg met women to pay for sex online and then introduced him to Gaetz and others. Greenberg admitted in his guilty plea that he trafficked a minor and introduced her to other "adult men" who had sex with her when she was underage.

The Daily Beast previously obtained an apparent confession letter Greenberg shared with longtime Trump adviser Roger Stone when he sought a presidential pardon last year. The former tax official said in the letter that he provided cash and gifts to several women, including an underage girl, though he claimed that he was unaware that she was a minor. The outlet also obtained Venmo records showing that Greenberg made 150 payments to dozens of young women, including one who was 17. The outlet also found Venmo payments from Gaetz to Greenberg before Greenberg paid several young women.

Text messages reviewed by ABC News show Greenberg texting a woman he met online in 2018 in which he appears to discuss payment, whether the woman is of legal age and whether she would do drugs before arranging a meeting including Gaetz and one of her friends.

"I have a friend flying in and we are trying to make plans for tonight. What are your plans for later," Greenberg wrote. "And how much of an allowance will you be requiring :)"

The woman told Greenberg that she has a friend she could bring and usually requires "$400 per meet."

Greenberg then sent the woman a photo of Gaetz posing with elementary school students, referring to him as "My friend."

"Oooh my friend thinks he's really cute!" the woman replied before asking Greenberg if Gaetz used the same website that Greenberg used to meet her.

"He knows the deal :)," Greenberg replied.

Gaetz has denied using "sugar daddy" websites where women sometimes arrange dates in exchange for cash or gifts, though The New York Times reported this spring that investigators believe Greenberg used the websites and "introduced the women to Mr. Gaetz, who also had sex with them." Gaetz's spokesman Harlan Hill told ABC News that Gaetz has already "addressed the debunked allegations against him."

"After months of media coverage, not one woman has come forward to accuse Rep. Gaetz of wrongdoing," Hill said. "Not even President Biden can say that. That others might invite people unbeknownst to a U.S. Congressman to functions he may or may not attend is the everyday life of a political figure. Your story references people the congressman doesn't know, things he hasn't done and messages he neither sent nor received."

Another Facebook message exchange reviewed by ABC News showed Greenberg apparently organizing a meeting with the women, Gaetz, and Florida doctor Jason Pirozzolo. Pirozzolo, an ally of Republican Gov. Ron DeSantis who co-founded a medical marijuana advocacy group, accompanied Gaetz on a trip to the Bahamas in 2018 that has come under scrutiny by prosecutors over potential corruption-related to marijuana-related legislation that Gaetz previously sponsored, according to the Associated Press.

Greenberg, in the Facebook messages, appeared to invite an unnamed Florida media entrepreneur to Pirozzolo's home, which he described as "our safe place." He also listed the names of two girls that he paid via Venmo, according to ABC.

"I think it would be a wise investment of time. You might already know Jason Pirrazolo ... but I'd like for you to meet Congressman Matt Gaetz," Greenberg wrote. "Gaetz is a wild man, but great dude."

Several days later, the unnamed entrepreneur posted a photo to Instagram including the two young women Greenberg mentioned in the messages, according to the report.

Pirozzolo's attorney did not comment on the report. Fritz Scheller, an attorney for Greenberg, told the outlet that the "only comment I can make is Joel Greenberg has executed a plea agreement with the government and will continue to honor his obligations pursuant to that agreement."

Scheller last month cited the ongoing cooperation to ask a judge to delay Greenberg's sentencing, which prosecutors did not oppose and a judge approved a day later.

"Mr. Greenberg has been cooperating with the Government and has participated in a series of proffers," Scheller wrote. "Said cooperation, which could impact his ultimate sentence, cannot be completed prior to the time of his sentencing."