A fan squeezed Lindell's armpit during a photo-op — was he the victim of a "martial arts" pressure-point attack? 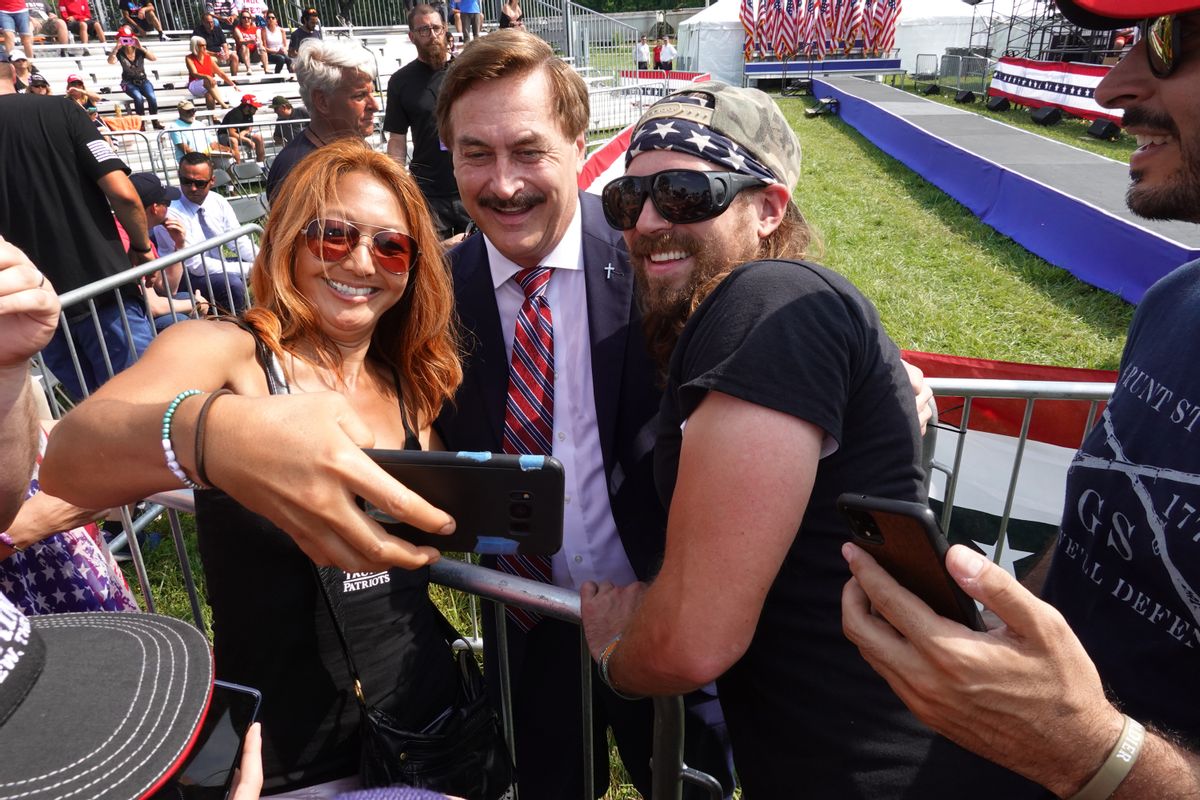 Supporters of former President Donald Trump take a selfie with My Pillow founder Mike Lindell as they wait for the start of a rally at the Lorain County Fairgrounds on June 26, 2021 in Wellington, Ohio. (Getty Images)
--

MyPillow CEO Mike Lindell appeared visibly shaken on Thursday as he discussed a physical "attack" he suffered during this week's "cyber symposium," the event at which he promised to share irrefutable evidence of industrial-scale voter fraud that would propel former President Donald Trump back into office.

"When I got to my hotel, I... I was attacked," Lindell said during an on-stage speech at the symposium, his voice audibly shaking. He immediately turned things over to one of his security professionals to outline how the event's "red team" had discovered agitators within the facility — but Salon was unable to find any evidence of those allegations.

Though the predicted Aug. 13 "reinstatement day" has now come and gone without any evidence to prove the widespread election tampering Lindell alleges, the pillow maven is now claiming that the assault he referenced on stage involved a fan squeezing his armpit just a little too hard while posing for a picture — a detail which has led a number of right-wing sites to speculate that the outspoken Trump supporter was the subject of a "martial-arts" style pressure-point attack.

According to an interview Lindell gave to right-wing blog "100 Percent Fed Up" Friday, the incident happened at the Sheraton hotel in Sioux Falls, South Dakota, late Wednesday night.

While posing for photos with fans, Lindell claims he was approached by a "tall" and "very strong" man in his late 20s, who pulled him in close for the shot. Apparently the man grabbed Lindell under the armpit and squeezed, leaving him in "excruciating" and "intense" pain.

Though Lindell admitted to the site that he didn't visibly react, it was only because he didn't want to give his assailants "the satisfaction" of seeing him hurt:

Mike didn't want to give either of the men the satisfaction of knowing how badly he was being hurt, so he continued to stand and smile for the camera without flinching. "He either wanted me to react or to fight him," Mike said.

When Mike got to his room, he checked to see if his skin had been penetrated by a needle or any other device and called the police to report the incident. Unfortunately, all three men had disappeared from the lobby by the time the police arrived to take their report. The police also checked under Mike's arm for any obvious injuries.

The Sioux Falls Police Department confirmed to the Associated Press that it is investigating one reported assault that occurred at a hotel near the event, but did not identify the alleged victim.

100 Percent Fed Up went so far as to suggest the "attack" was an attempt to disable Lindell through a pressure-point attack on a grouping of nerves which run through the armpit, called the subaxillary bundle — or even a play to sever his brachial artery, a major circulatory route that, if damaged or severed, can prove fatal.

The site reported that Lindell said he'll "never forget the evil face of the man taking the photo."

When reached for comment Saturday on the incident, Lindell suggested that "people from Salon might be involved" in the attack and that he was forwarding this reporter's name to investigators. "You are evil!" he added.

The incident was just the latest roadblock for Lindell in his quest to overturn the 2020 election results — throughout the "cyber symposium" he failed to produce long-promised physical voting machines and data "packet captures" that he said would show widespread vote tampering, while blaming antifa for the repeated failures.

You can read Salon's previous coverage of Lindell's South Dakota gathering, below: