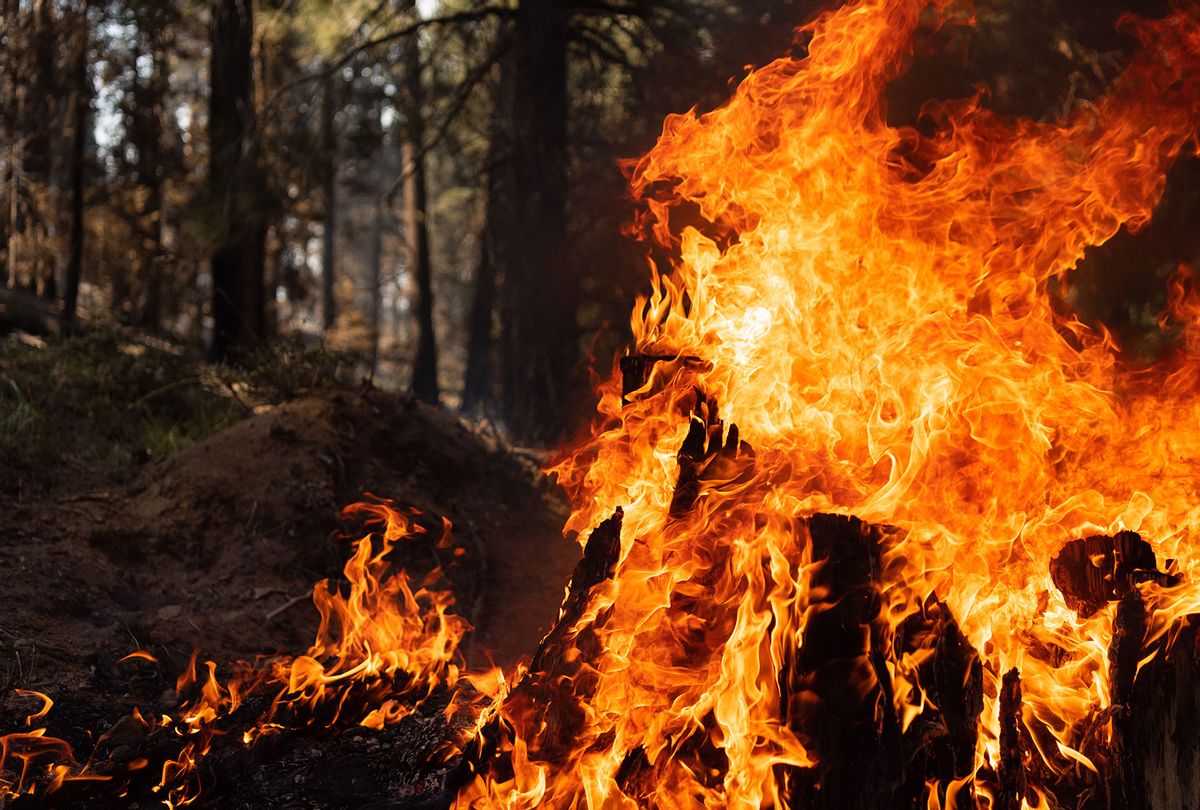 A tree stump is engulfed in flames in the Bravo Bravo section of the Bootleg Fire on July 21, 2021 in the Fremont National Forest of Oregon. The Bootleg Fire, which started on July 6th near Beatty, Oregon, has burned over 395,000 acres and is currently 38% contained. (Mathieu Lewis-Rolland/Getty Images)
--

During that time, residents of the Kenai Peninsula and nearby Anchorage battled suffocating smoke. Roads and trails were closed. And some communities were told to prepare for evacuations.

That extended period of multiple stressors — over many months — took a toll on people's long-term mental health, according to preliminary results from the Southcentral Wildfire Study, which examined the community's experience of the Swan Lake fire.

As dozens of major wildfires burn across the American West, Siberia and other parts of the globe, we spoke with study coauthor Micah Hahn, an assistant professor of environmental health in University of Alaska Anchorage's Institute for Circumpolar Health Studies, about why there's much more that communities can do than just prepare physically for wildfires in their communities.

Why did you decide to study wildfires and mental health?

I'm an epidemiologist and I try to understand more about how climate change is impacting the health of communities — particularly in Alaska, where I'm a professor. Previously I've done work looking at the cardiorespiratory impacts from wildfire smoke. That's one of the very typical health impacts that we think about with wildfires.

But through a colleague I got connected with my collaborators at Johns Hopkins University and McGill University, who come from a background in mental health research and disaster response. Together we honed in on wildfires in Alaska and thought about the mental health impacts because it overlapped with our areas of expertise and was a super understudied area.

We're working on a literature review of wildfires and mental health to see what else is out there. And most of the other research is a little bit older and has come from Australia. There's very little in the United States.

There's been a pickup of research around mental health and climate change more broadly, including by a researcher in Canada who's been working on climate change and ecological grief. But that's not focused so much on a specific disaster or an acute event, but more on the concept of climate change itself and people having this feeling in their core about what's going on. That's been the main thread of climate and mental health work so far.

What were some of the top things you heard from people in your study?

One of the things people talked about was feeling trapped. They were feeling closed in and having feelings of isolation or claustrophobia. For some that was from the smoke, but for those that were in Kenai, there's basically one road through there that accesses all of those communities. And when the wildfire was right next to the road and was even jumping it at times, that caused huge issues with traffic control and whether people were allowed to evacuate or not evacuate.

Many people were feeling really pinned in — like they couldn't go anywhere.

They also felt prolonged stress. This fire was going on all summer. It was over three months long. And even people who weren't stressed at the beginning were really stressed by the end.

Something else we heard a lot about was grief after the fire was over [because of the change in the forest]. We have a lot of wildfires in Alaska, but there's also a lot of wild space so there aren't very many wildfires that are as close to communities as this one was.

If you drove down to this area and you saw what the landscape looked like afterwards, it was like black toothpicks. If this was something that a person saw from their house every day or was an area where they spent a lot of time with their family and they have memories from that region, it was really sad.

Many people wondered whether it would ever look the same again. We heard a lot about feelings of loss and helplessness.

Another thing folks talked about was what they were calling "returning ghosts." I won't label it PTSD, but it's a similar idea. The feeling that we've done this before. We have a lot of natural disasters in Alaska — wildfires, earthquakes, tsunamis. And so people were just dealing with the reoccurrence of [trauma] and the uncertainty of all this, and being worried about what might be coming down the road.

Is climate change also a personal concern for Alaskans?

I feel like we talk about climate change every day. I think that's for a few reasons. Climate change is happening faster here, compared to the lower 48, because we're closer to the poles. And Alaskans generally are very close to the land — it's a big part of people's daily lives. There's a lot of outdoorsy people, but a lot of Alaskans also harvest wild berries or hunt or harvest salmon to fill their freezers for the winter.

You're just sort of in tune with what's going on outside. When we see the salmon don't return or there's a huge die-off event because the water's too warm, it doesn't take a lot to impact people very directly.

Were there any solutions or changes that the residents thought could help in the future with wildfires?

Yes, an issue that came up was communication. People wanted to see one centralized place to find information and more thinking about specific demographic groups, like "end of the road people" — those who move to rural Alaska because they like to be away from people, but that also makes them hard to contact in an emergency.

They also wanted to see enhanced early communications and community-based preparedness programs. People who live in the communities near wildfire zones wanted to be more integrated into the planning and evacuation process before a wildfire. They wanted to see something that was a little bit more from the bottom up, rather than someone helicoptering in during an intense situation saying, "do this."

Another thing was establishing formal or informal mutual support groups. We talked a lot about having a buddy system when you're doing evacuation planning — doing the same thing for mental health during a wildfire, especially a prolonged event, so people have a preset group they can talk with.

And specifically, they were also wanting a video series showing people what to expect during a wildfire as a way of helping people to prepare mentally for what might be happening to them.

How can this research help other areas?

Obviously this work was done in Alaska, but I think that many of these things could apply in other places where we're seeing wildfires. One of the things that people brought up was, in thinking about the context of Alaska, people here are pretty self-reliant and like to think of themselves as prepared. So one suggestion for interventions was to build on that preparedness and do the same thing that we do for physical fire preparedness, but instead focus on mental health.

How can you mentally prepare and get your family ready for these types of things before the event happens?

In public health it's called a "strength-based approach," which means starting from the strengths of the community and designing interventions using community-based approaches.

For people in California or Oregon or whatever town you live in, [find] what's strong in your community that can be built on to help people prepare.