Pompeo put on the spot by Fox News' Wallace: “Do you regret giving the Taliban that legitimacy?" 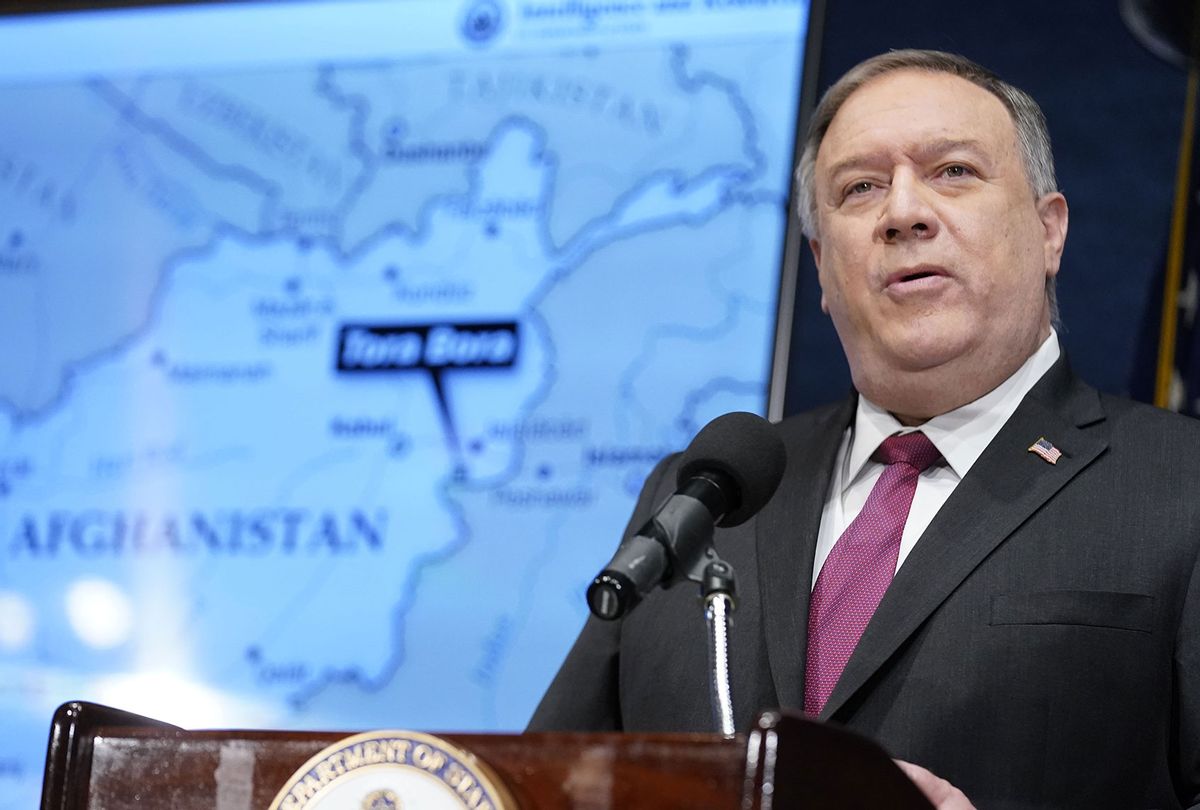 Fox News host Chris Wallace challenged former Secretary of State Mike Pompeo for criticizing the Biden administration's failures in Afghanistan, pointing out that Pompeo had in fact "given the Taliban legitimacy" during the Trump administration.

Amid an unprecedented upheaval of political power in Kabul, where this past weekend the Taliban finally succeeded in a broad campaign to install its own regime, flooding the nation's capital to declare a new government, conservatives have rushed to pin the blame on President Biden's apparent inability to contain the terrorist group as he closes out the costliest war in U.S. history.

Chief among these critics is Pompeo, who oversaw negotiations with the Taliban during the Trump administration, and who, in a "Fox News Sunday" interview, said that the Biden administration had "just failed in its execution of its own plan."

"It looks like they are now trying to get folks out," Pompeo claimed. "This reminds me of when we have seen previous administrations allow embassies to be overrun, it's starting to feel that way. It also looks like there's a bit of panic having to reinsert soldiers to get them out."

Pompeo specifically called out Biden's decision to withdraw U.S. troops from Afghanistan, which he alleged gave the Taliban a window of opportunity to execute its coup.

"They should go crush these Taliban who are surrounding Kabul," Pompeo added. "We should do it with American airpower, we should put pressure on them, we should inflict cost and pain on them. We shouldn't be begging them to spare the lives of Americans, we should be imposing costs on the Taliban until they allow us to execute our plan in Afghanistan."

But Wallace objected, noting that President Trump had in fact expressed a desire to withdraw from Afghanistan, and even led peace talks with the Taliban back in February of last year that ended in a U.S. vow to withdraw all troops by May of 2021.

"Critics say that for the U.S. to cut a deal with the Taliban without the Afghan government even in the room was hugely demoralizing and led inevitably to where we are today," Wallace shot back.

Pomeo disputed this depiction, telling Wallace to "​​go read the deal, go read the conditions that were built into the deal." But Wallace stuck to his line of questioning, continuing to press Pompeo on whether any deal should have been made with a terrorist organization in the first place.

"Do you regret giving the Taliban that legitimacy?" Wallace asked. "Do you regret pressing the Afghan government to release 5,000 prisoners? Which they did, some of whom are now back on the battlefield fighting with the Taliban."

"You make peace with your enemies," Pompeo said, adding that he "never trusted the Taliban."

The former official continued: "We didn't take the word of the Taliban, we watched their actions on the ground.  When they did the right thing and helped us against terror, that was all good, and when they didn't, we crushed them."

On Sunday, CNN National Security Analyst Peter Bergen echoed Wallace, claiming that the Trump administration had emboldened the Taliban with a poorly structured deal. "It was the Trump administration, Secretary Pompeo's staff that negotiated with the Taliban beginning in 2018 and they did a rather crucial thing that I think has been part of the failure here which is they excluded the Afghan government from the negotiations," Bergen argued.

Despite the Taliban's takeover of Afghanistan, President Biden has stuck by his decision to withdraw all U.S. troops from the country, citing that the U.S. had already quashed Al Qaeda and eliminated Osama bin Laden.