Unions warned the CDC's mask rollback would have consequences. They were right

For unions, the mask flip-flop was the 2nd time that “guidance” from the CDC would have catastrophic consequences 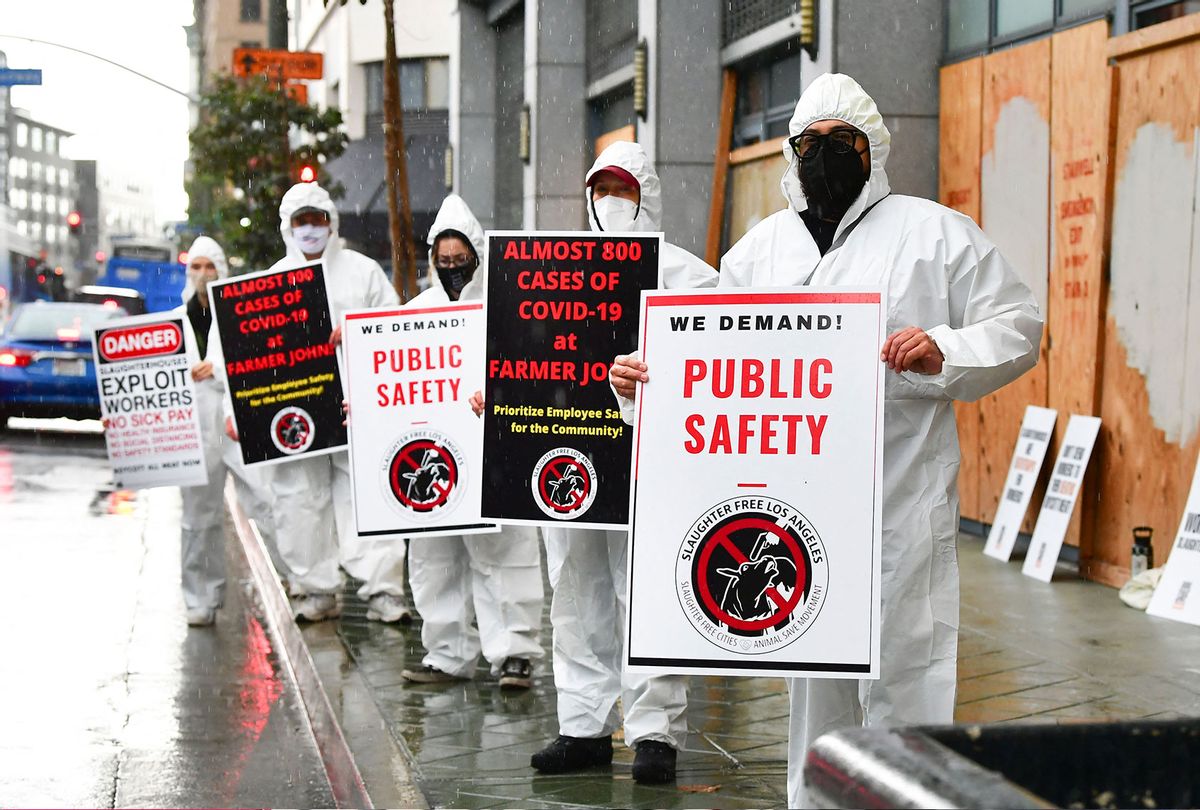 Protesters in front of the Occupational Safety and Health Administration (OSHA) building in Los Angeles, California on March 12, 2021, calling on OSHA to do more to protect workers from Farmer John's slaughterhouse where the total number of Covid-19 positive cases reached 789 as of March 11, totalling almost half the workforce of 1,837 workers. (FREDERIC J. BROWN/AFP via Getty Images)
--

From the very start of the COVID-19 pandemic during the Trump administration, our national response has been fractured. Tragically, that dysfunctional response has continued under President Biden, who pledged during his campaign to defeat the virus by making decisions guided by sound public health science and not an economic calculus that was the hallmark of the Trump tenure.

In May, with Biden in for four months, the CDC executed a Bushesque "Mission Accomplished" move in the war on COVID. The nation's premiere health agency inexplicably lifted the universal mask mandate for vaccinated Americans in public indoor settings, even as tens of millions of Americans were not vaccinated and living in counties where below 40 percent of the eligible population had their shots.

The unions that represent nurses and healthcare personnel, as well as essential workers in the food processing and distribution sectors, went ballistic fearing for the safety of its members. But because the corporate news media avoids labor stories you most likely missed it.

The unions warned that the CDC was relying on an honor system which would put their members at risk and would set the stage for the proliferation of an even more contagious variant that would hit hardest the communities of color with the lowest level of vaccine acceptance.

Both things happened and the results, though still unfolding, have been catastrophic.

In their drive to "return to normal" and "get the economy back on track," our national policy makers opened the door wider to the ultra-contagious delta variant. As the variant started to get traction, President Biden described our pandemic as a "pandemic of the unvaccinated," which ignored the possibility that Delta could set the stage for yet another variant that could be more effective at undermining the efficacy of the existing vaccines.

In a May 17 tweet, the New York State Nurses Association, which represents 40,000 Registered Nurses, issued a warning: "The rushed CDC mask guidance is a rollback on patients' & workers' protections across the country. The path to stop the virus is more than the vaccine alone. This guidance will push communities to remove their masks sooner than recommended—risking lives."

Key among their concerns: In the neighborhoods of color hardest hit by the coronavirus, where a large portion of the essential workforce resides, the rate of vaccination is well below the 50-percent threshold found in whiter, more affluent areas.

Charlene Obernauer, the executive director of the New York Committee on Occupational Safety and Health, said her group had heard from unions representing grocery-store workers that were pressing their employers to stick with the mask mandate.

"We would support the unions that are calling for the mask mandate to stay in place," Obernauer said during a phone interview. "There is still a disparity in terms of the rates of vaccination between white communities and communities of color."

"We are calling on all those businesses who employ Local 338 members to continue to encourage mask-wearing in their stores and following safe practices in their establishments," texted Nikki Kateman, the political and communications director of Local 338 Retail, Wholesale and Department Store Union in New York. "Out of respect to the health, safety and sacrifices of our members, we strongly encourage everyone to mask up at places like the grocery store and pharmacy.

The union estimated at least 185 grocery workers and 132 meatpacking workers have died from the virus, with tens of thousands of other union members infected or exposed, incurring potential long-term health risks.

During a May 19 press briefing by New York City Public Advocate Jumaane Williams, epidemiologist Dr. Celine Gounder echoed NYSNA's concerns about the rollback of the indoor-mask mandate. She told reporters the CDC should have coordinated the shift in guidance with "stakeholders" including labor unions and the Federal Occupational Safety and Health Administration (OSHA).

Gounder was sharply critical of the CDC's decision to rely on the "honor system" when it came to waiving the mask and social-distancing requirements for those that are vaccinated.

"You need to take into consideration other questions: for example, how can you be sure somebody has truly been vaccinated?" she said. "There's a reason somebody goes into a bar and we card them when they want to buy alcohol."

The public advocate's health adviser told reporters that at that point, slightly more than one in four black Americans were vaccinated nationally, with the rate for Hispanics just a few percentage points higher. She maintained that the CDC should have waited for the vaccination rate in communities of color to hit the 50 percent threshold before rolling back the requirements.

"It is the duty of public health not to just look out for the individual, but the population—and specifically the most vulnerable among us," she said.

After all of the rhetoric from politicians about being forever mindful of the vast race-based health disparities in communities revealed by COVID, they were suddenly oblivious to them in their drive to get back to normal.

It would be a July delta outbreak in Provincetown, Massachusetts that would send the CDC back to the drawing board on their rollback of universal masking, suggesting that Americans consult the agency's county by county dashboard that tracks the level of virus transmission as low, moderate, substantial, or high.

What got the CDC's attention in Provincetown was that three-quarters of the nearly 500 new COVID cases in July in that community were among people that were fully vaccinated — meaning that while the vaccines greatly reduced the chance of dying from the virus or landing in an ICU, it did not prevent the transmission of the virus in all cases.

According to CNN, there "were five hospitalizations associated with the outbreak — four of whom were fully vaccinated people."

By the middle of August, thanks to delta, close to 84 percent of America's counties were graded as a "high transmission area." Yet politicians across the country were reluctant to reimpose the mask mandate. The CDC, just months after lifting the mask rule, was now suggesting the vaccinated return to masking in public indoor settings.

For unions, the mask flip-flop was the second time that "guidance" from the CDC would have catastrophic consequences, despite their protestations.

Even before New York was in lockdown mode, in mid-March of 2020, the New York State Nurses Association warned that the CDC's emergency guidance that nurses should reuse N95 masks, rather than dispose of them after each clinical encounter, would result in their members catching COVID and dying; and that, in the process, the hospitals where they worked would become vectors for the deadly disease.

Again, both things happened. According to a joint reporting project produced by the Guardian and Kaiser Health News, over 3,600 healthcare professionals died as on the job in the course of the pandemic so far.

Initially the delta variant tore through states like Alabama, Idaho, Louisiana, Mississippi and Wyoming, where vaccination rates were lowest. Texas and Florida's hospitals were sorely tested even as their Republican Governors did all they could to prevent local school districts from mandating masking, despite public health officials warning that delta was hitting children harder than previous variants.

On August 12, the Washington Post reported that "two-thirds of Americans in highly vaccinated counties now live in coronavirus hotspots … as outbreaks of the highly transmissible delta variant — once concentrated in poorly vaccinated pockets — ignite in more populated and immunized areas."

"How rapidly the state of the pandemic changed in July from a problem for the unvaccinated to a nationwide concern," the Post wrote. "Hospitalization rates in states with less than 40% of their population fully vaccinated are four times higher than states that are at least 54% vaccinated," the newspaper also found.

The Washington Post's analysis found that breakthrough infections, meaning someone who is vaccinated gets re-infected, did "not appear to be as extremely rare as hoped, accounting for more than a fifth of new recent infections in Los Angeles; New Haven, Conn.; and Oregon, officials said."

While the media coverage and policy makers focus on the death toll and hospital admissions "dashboard," what often goes underreported is that a significant percentage of those afflicted even with very mild COVID will suffer long-term health consequences of varying severity.

Even patients that tested positive for COVID, but were asymptomatic, have reported lingering health effects.

"Doctors have been estimating one-quarter to one-third of COVID-19 patients become long haulers, as many patients call themselves," reported the UC Davis Health's Post-COVID-19 Clinic. "Now, four studies published since February confirm that range. They show that 27% to nearly 33% of patients who had COVID-19 but did not need to be hospitalized later developed some form of long-haul COVID."

"Another consistent finding is that it does not appear to matter whether non-hospitalized patients had more severe cases of COVID-19, mild cases or even cases that caused no symptoms at all," according the the UC Davis website. "Just as consistently, age or prior health – whether people were active and fit or had some previous health issues like diabetes or respiratory problems – made only a very small difference, if any, among non-hospitalized patients."

As we approach the last half of the second year of this scourge, nearly 650,000 Americans have died. Another 37 million have been infected with COVID-19; in a nation with 330 million people, the number of infected is more than 10 percent of the population. The pandemic is likely to leave several million Americans dealing with long term health issues.

Maintaining the universal mask mandate would have meant less virus transmission, reduced the chance of spawning new variants and shown essential workers the protection they and their families deserved.