"Hot girl food" or not — tinned fish is the best fish

Food52 chatted with Chris McDade, author of "The Magic of Tinned Fish" 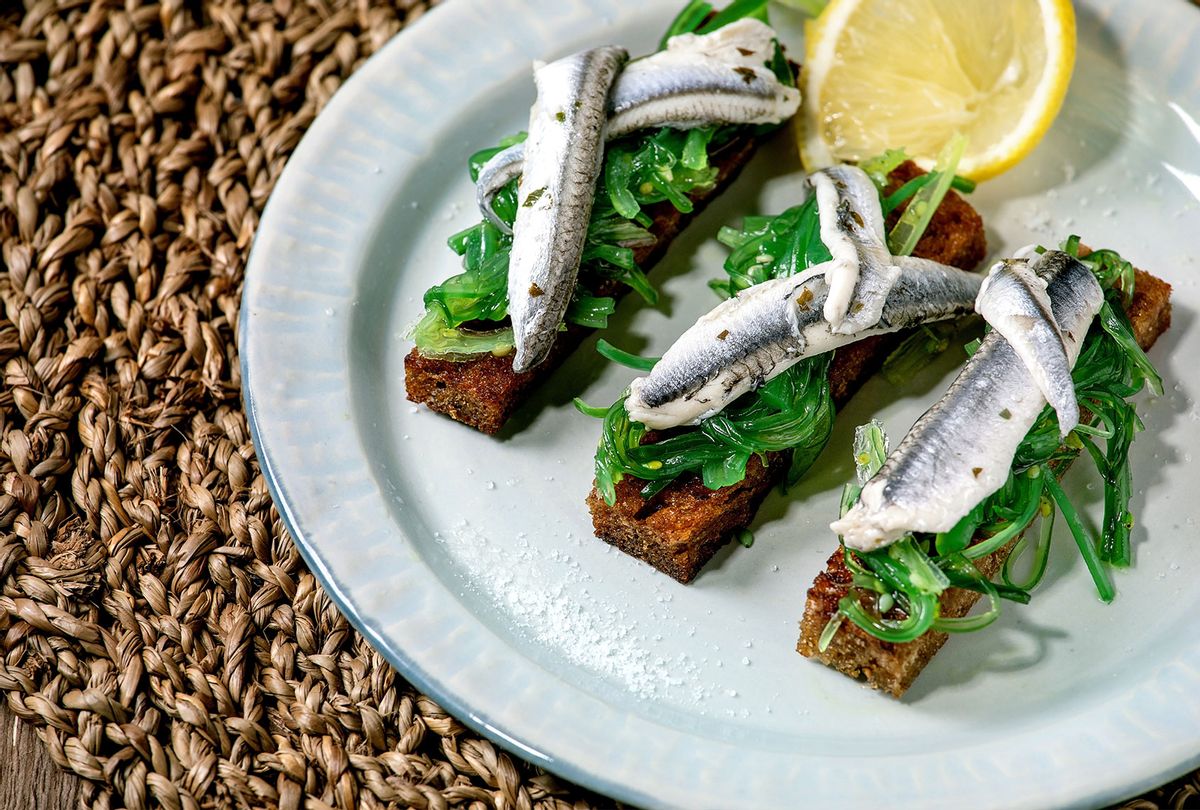 Chef Chris McDade remembers the tinned fish of his youth. Growing up in Georgia, the go-to snack on family fishing trips was the simple, sublime trifecta of canned oysters, saltines, and hot sauce — the rich, briny oysters balanced by the sturdy, salty crunch of the crackers and a vinegary zing of heat. Lest this memory sound too precious, these were not top-shelf shooters.

"The ones we used were like 79 cents for a tin. But they were easy to pack in and easy to pack out. And delicious," says McDade.

A slightly gussied-up version of this combination in the form of a two-sentence recipe, alongside a moody photo of Ekone Oyster Co. Smoked Oysters ($10 a can) and a bottle of Frank's RedHot, is included in the Brooklyn-based chef's new cookbook, "The Magic of Tinned Fish." It's a deep dive, if you will, into elevating home cooking with canned seafood — as snack, star ingredient, and secret umami weapon. The book also includes helpful guidance on the chef's preferred bands and what to look for when buying (like sustainable fisheries and fish caught using the hook-and-line method).

McDade began work on the cookbook in 2019, well before tinned fish were dubbed 2021's "hot girl food." His book is not the first to include tinned fish recipes — my 1975 edition of "The Joy of Cooking" shares several, like Crab Meat Custard and a tantalizing Seafood & Cheese Loaf, made with canned salmon or tuna — but McDade's recipes are decidedly more imaginative, and will have you eyeing any dusty tins in your pantry with renewed inspiration. His recipe for cast-iron rib-eye with anchovy butter is mouthwatering and unfussy. Another for canned octopus with skillet-fried potatoes and aioli, a play on the Spanish classic pulpo a la gallega, promises an elegant dish — without having to massage, boil, or bludgeon an octopus.

"It could be chubby-guy food or middle-aged-dad food — whatever it takes to get people to eat more tinned fish."

On a recent Thursday afternoon, I spoke to McDade from the kitchen of Popina, his Italy-meets-the-South restaurant in Brooklyn, about "The Magic of Tinned Fish."

Caitlin Raux Gunther: So, your first cookbook! Tell me about the experience of writing. It struck me as straightforward, rather than a personal history narrative, which often finds its way into cookbooks.

Chris McDade: I thought it was going to be easier than it was . . . I will say that the writing part turned out to be my favorite. That was such a new experience for me, using my mind and creativity in a different way. In a sense, it was more straightforward than cooking.

I wanted the focus to be on tinned fish. I think it's important that people understand that it's not just StarKist tuna fish or shredded salmon. [Editors' note: The author chose to exclude tuna from the book altogether, citing overfishing and a shrinking population.] There's a whole world out there. I didn't want to cloud the water too much with my personal story. I wanted it to be a book that gets right to the point; people understand what I'm trying to say; and then we get into the recipes.

CRG: I like that it's informative, even for people like me, who think they're pretty knowledgeable about tinned fish.

CM: That's good, right? If someone reads the book and becomes more interested, or doesn't even follow the recipes but just gets inspiration and takes like two or three nuggets from the book . . . It's all about trying to get people to appreciate it. It's not a textbook. It's, I don't know, "journey" is a weird word, but if you have no idea about tinned fish, maybe it is a journey to discover what they can be. You can mix them in pasta, put them on a sandwich, or stew them with beans. There's so much you can do with them.

CRG: You also included some new takes on old favorites, like — crab cakes, was it?

CM: Mackerel cakes. I grew up eating my grandma's salmon patties. I loved them, but it was the world's shittiest salmon in a can. For the book, I used mackerel instead. They're easy to make and they last a couple of days, which is another good thing about tinned fish — because they're already preserved, a lot of the recipes in the book can be made ahead.

CRG: In the intro, you wrote about wanting to make recipes that were accessible, as in, not too many hard-to-find ingredients.

CM: I want to get people to understand and appreciate tinned fish, and add it to their weekly cooking, so I made sure that some of the ingredients weren't so inaccessible that that goal fell short. In the book, there are also a lot of fresh ingredients and herbs. But one thing I tried to avoid is recipes that call for something like a teaspoon of Worcestershire sauce and then you have a whole bottle of sauce that sits in your fridge until you throw it out. We tried to use ingredients more than once in the book.

CRG: Tinned fish is definitely having a moment. Do you think it's more than a trend?

CM: I hope so. It's a sustainable option. It lasts a long time and there's minimal waste, because anything in the tin, you can eat. And it's healthy, packed with omega-3s, and you get a ton of protein for something the size of a playing card. It's definitely stuck around in other cultures — Spain, France, Portugal, Britain, Italy. Americans need to embrace it the same way everywhere else has, and I think they will. We're in a world where sustainability is such a big thing. Convenience is such a big thing. It's hard to get more convenient and sustainable than fish you can throw in your pocket and eat anytime.

For newcomers to cooking with tinned fish, consider this your gateway: a steak dish that's decadent and doable. McDade notes: "While this recipe suggests using rib eye, there's really no cut of steak that won't work well with anchovy butter." We tend to agree.

The classic fish-and-chips gets a clever update with beer-battered tinned sardines and ​​harissa, a fiery pepper sauce with roots in Morocco. Crack open a pale ale and enjoy.

Mackerel and Poached Egg On Toast

This simple and flavorful recipe can be assembled in the time it takes to cook an egg — which you'll learn how to do perfectly with McDade's poaching tips. Maybe you're used to smoked salmon with poached eggs, but it's high time you tried swapping it another fish, like mackerel.

Calamarata with Squid in Its Own Ink

Here, McDade demystifies cooking with squid ink — just open the tin and pour into the simmering garlic and wine sauce. The squid ink adds a briny flavor and a moody color to the calamarata pasta, a specialty from Naples.

This chowder recipe elevates the summer staple to an elegant, year-round dish, with a light, creamy broth and tinned smoked trout. McDade instructs us to add the trout just before plating so that the bold flavor doesn't overwhelm. Garnish with dill fronds for an herby finish.

Canned anchovies and sardines are just two of the umami-packed ingredients in Alicia Lu's XO sauce, which acts as an unexpected foil to that Southern staple, shrimp and grits. The author explains, "You can put XO sauce on just about anything, from noodles to scrambled eggs, but I decided to try it on traditional shrimp and grits and was astounded by how well it all works together." We're here for it.

With just a handful of ingredients, this pasta is an effortless crowd-pleaser. The anchovies dissolve into the buttery sauce, adding depth and deliciousness. Second helpings are guaranteed.

In this recipe, biftekia — a Greek dish that's essentially a cross between a burger and a kebab — is served with an herby sauce rich with anchovies. Upon tasting this recipe, our editors had this to say: "These skewers are a great way to switch up your grilling game — lamb! spices! skewers! — and we'd eat that sauce on pretty much anything."

The Caesar salad was never broken, but Eric Kim decided to fix it anyway — with extra anchovies and the addition of roasted seaweed snack, or gim. Says the author, "this ingredient, along with a couple teaspoons of sesame oil, adds an umami-rich back note that complements the anchovies in a new, beautiful way."

Inspired by David Lebovitz's fresh sardine pâté, this dish leans on canned sardines and gets an added citrusy brightness from fresh lemon juice and zest, plus a touch of heat from Aleppo pepper. It makes for an easy and impressive pantry hors d'oeuvre.

White Bean and Tuna Salad with Hard-Boiled Eggs and Dukkah

A Spanish play on a Niçoise salad, this protein- and umami-packed recipe features tuna, white beans, and hard-boiled eggs, plus a handful of herbs and a few dashes of dukkah. For a perfect dinner, recipe tester Christa Chialtas Gault recommends pairing this salad with olive-oil-drizzled grilled country bread.