“For the first time, America’s children have leverage. I will not surrender that leverage,” Pelosi said 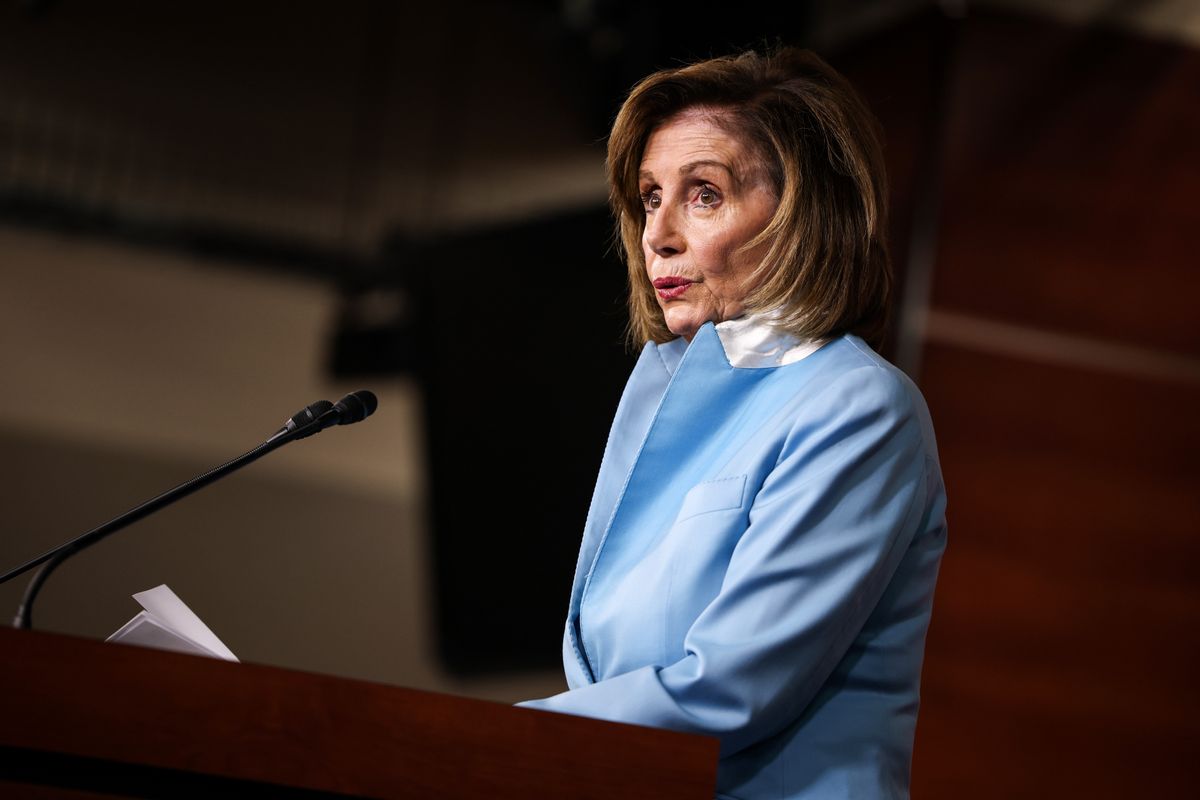 House Speaker Nancy Pelosi, D-Calif., dismissed a threat from a group of House moderates, who said they plan to oppose the Democrats' $3.5 trillion budget bill unless the bipartisan Senate infrastructure bill gets an immediate vote.

"This is no time for amateur hour," Pelosi told her leadership team on a private call Monday, according to Politico. "For the first time, America's children have leverage. I will not surrender that leverage," she said.

Pelosi and Democratic leaders have said for weeks that they plan to advance the $1 trillion Senate-passed infrastructure package at the same time as the budget bill, which is expected to include many of President Joe Biden's American Family Plan proposals to expand health care, child care and public education, as well as combat climate change, among other measures. The dual-track strategy came about after progressive lawmakers called for a bill that invests far more heavily in the social safety net and climate than the bipartisan bill, which was largely limited to physical infrastructure like roads, bridges and railways.

A group of nine House moderates last week threatened to block the budget bill unless the House votes on the bipartisan bill first. "We will not consider voting for a budget resolution until the bipartisan Infrastructure Investment and Jobs Act passes the House and is signed into law," the group led by Rep. Josh Gottheimer, D-N.J., said in a letter to Pelosi.

Rep. Peter DeFazio, D-Ore., sent out his own letter pushing back on calls to immediately pass the Senate bill.

"Unfortunately, the Senate's Infrastructure Investment and Jobs Act… falls short on many priorities of the House," he told colleagues. "The Senate has had unilateral control over the infrastructure bill. If we want House priorities to be considered, we cannot let the same thing happen in reconciliation."

With just a three-seat majority in the House, the group of nine Democrats has more than enough members to block the budget bill if they go through with their threat. But a larger group of House progressives has warned that they would torpedo any attempt to pass the bipartisan bill unless it advances at the same time as the budget package.

A "majority" of the 96-member Congressional Progressive Caucus "would commit to withholding a yes vote on the bipartisan infrastructure deal… until the Senate has passed budget reconciliation legislation deemed acceptable" by the group, caucus Chairwoman Pramila Jayapal, D-Wash., Rep. Ilhan Omar, D-Minn., and Rep. Katie Porter, D-Calif., said in a letter to Pelosi and Senate Majority Leader Chuck Schumer, D-N.Y.

Pelosi acknowledged the progressive opposition to the moderates' plan, telling her leadership team that "there is no way we can pass those bills unless we do so in the order that we originally planned."

Pelosi on the call reaffirmed her plan to pass a rule next week that would include the infrastructure bill, the budget resolution, and voting rights legislation, according to Politico. The speaker told members last week that the House would vote on the budget and voting rights bills, but only to advance rather than pass, the infrastructure package. Votes to proceed may come as early as Monday.

One Democrat described the plan to Politico as daring the moderates to vote no. The budget resolution is expected to include numerous provisions called for by moderate lawmakers, including a State and Local Tax break that Gottheimer has repeatedly demanded — even though research suggests that more than two-thirds of the benefit would go to the top 7% of earners and could exacerbate racial inequities.

"It is essential that we show results," Pelosi told her team on Monday. "Biden's agenda needs to show the results that we know it can produce."

Fellow Democratic leaders have urged unity among the caucus amid the strife from both sides.

"Remember the psychology of consensus. We are in this together, we have the leader of our party and we are pursuing the attainment" of our agenda, House Majority Leader Steny Hoyer, D-Md., told members on a private call Tuesday, according to the Associated Press.

"I would hope that none of us would do or say anything that would jeopardize passing these bills," added House Majority Whip Jim Clyburn, D-S.C., according to NBC News. "A lot of us need to hold hands. We need to be protecting each other and march together."

The Biden administration has also backed Pelosi's plan to advance both bills and the voting rights legislation.

"The President strongly supports the Rule," White House spokesman Andrew Bates told NBC. "All three are critical elements of the President's agenda, and we hope that every Democratic member supports this effort to advance these important legislative actions."

Gottheimer in a statement this week reiterated his view that Congress "cannot afford to wait months" to pass the infrastructure bill but insisted that he is "confident we can sit down together and work this out."

But even if Pelosi is able to hold her caucus together, Democrats still have a lot of work to do to pass the budget bill. Schumer gave Senate committees until Sept. 15 to write the actual bill after the chamber advanced a blueprint that calls for about $3.5 trillion in spending. But moderate Sens. Joe Manchin D-W.Va., and Kyrsten Sinema, D-Ariz., have already balked at the price tag and may attempt to cut the size of the bill further after progressive lawmakers, who called for a $6 trillion bill, agreed to compromise on the scope of the package.

Republicans have lobbied both senators behind the scenes in hopes that they will derail the Democrats' agenda.

"I know, from talking to both of them, there are concerns about the size and about the various tax increases," Senate Minority Whip John Thune, R-S.D., told Politico. "Their vote is the whole enchilada. If they want to stop this thing, they can. And I hope they will use that power."