The water crisis in climate-vulnerable Bangladesh

People, from young to old, must travel long distances to find fresh water in the country’s coastal regions 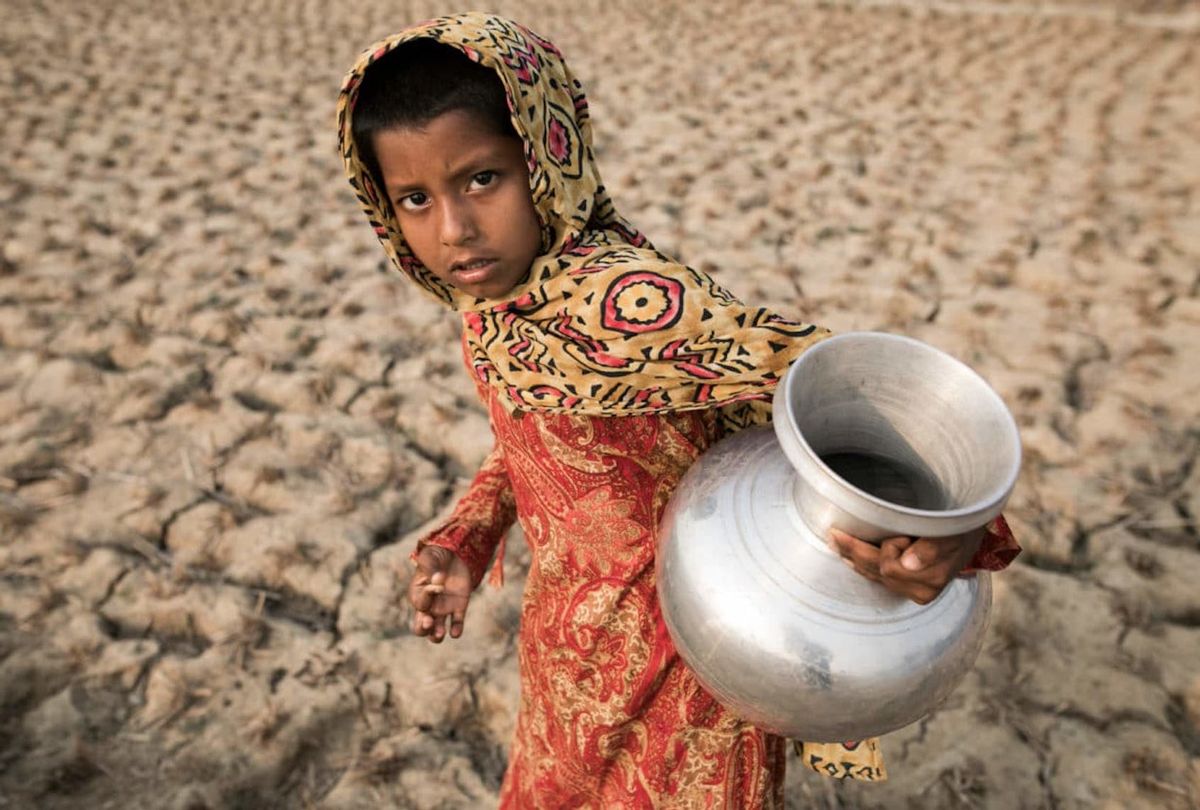 Tuli, 11, walks long distances every morning and evening to collect drinking water with her mother and aunt. Her school is closed due to the coronavirus pandemic and she passes her time doing household work with her mother. All visuals by ZAKIR HOSSAIN CHOWDHURY for UNDARK (Zakir Hossain Chowdhury / Undark)
--

EVERY DAY in a remote coastal village in southwest Bangladesh, Tuli, 11, helps her mother and aunt carry drinkable water from a pond. They must walk more than a mile, there and back, to collect the water. "This is our daily routine, except monsoon, the only season when we are spared from toils and pains as we can get fresh water supply from rain for three to four months," said Tuli's mother, Hosneara Begum.

In Bangladesh's coastal districts — including Khulna, Satkhira, and Bagerhat — much of the surface water has gotten so salty that it can no longer be used for drinking or for other domestic purposes. A small survey conducted in Satkhira in 2013 found that around 70 percent of local residents there depend on water in distant ponds. And a recent report by the American Geophysical Union suggests that by 2050, rising sea levels — which affect the availability of clean drinking water — will have cascading effects and lead to the migration of some 1.3 million people across the country.

Bangladesh is one of the world's most vulnerable countries to the effects of climate change. It already faces regular and severe natural hazards: tropical cyclones, river erosion, floods, landslides, and drought. All are set to increase in intensity and frequency as a result of climate change. The effect of sea level rise is more insidious. Saltwater gradually inundates coastal lands, destroying crops and homes and bringing disease to those who drink it. As a result, many have already been forced to move to other regions in Bangladesh, leaving their property and livelihoods behind.

Tuli, her mother, and her aunt walk to collect drinking water. From October to May, during the dry season, they do this job every day.

A woman collects water from a pond. Most coastal villagers drink water from ponds without purifying it and as result, often suffer from water-borne diseases.

In 2009, for example, Cyclone Aila damaged the embankments on the Kopotakkho River, and saline water entered Koyra Upazila, where Tuli's family lives. As a result, freshwater sources in southwest Bangladesh were almost destroyed. In most areas, water wells don't work because the salinity is increasing not only in shallow aquifers, but also deeper ones. The river embankments are eroded and groundwater sources are flooded by saltwater.

The excess salt can lead to hypertension, which raises the risk of strokes, heart attacks, and miscarriages.

Although women tend to drink less water overall, thanks in part to their long walks, this leaves them vulnerable to high blood pressure, heart disease, and kidney diseases, issues that can also affect the health of newborns.

Ismail Gazi, 85, also lives in Koyra and suffers from high blood pressure. With his wife and daughter-in-law unable to walk long distances, he must walk more than 3 miles, outside of the monsoon season, to collect drinking water for his family. "It's my duty," he said, "every morning and evening."

A woman returns home after she washes a cooking pot from a freshwater pond. The effects of climate change — floods, drought, extreme weather, growing food and water insecurity, and more — disproportionately harm the world's 1.3 billion poor, the majority of whom are women.

A woman heads to a pond to wash her clothes. A 2014 World Bank reportnoted that by 2050, climate change will drastically alter river salinity in the southwest coastal region in Bangladesh during the dry season. This will further exacerbate the shortage of water for drinking and irrigation.

An aerial view of a crowd at stream, which feeds a freshwater pond called Misti Pani'r Pukur. People from four villages depend on the pond for drinking water. Every afternoon, people — mostly women — gather at the pond after finishing their household work.

Women in coastal Bangladesh walk a long way to collect drinking water. According to research from the American Geophysical Union, by 2050, rising sea levels — which affect the availability of clean drinking water — will cause some 1.3 million people to migrate across the country.

Groups of women gather to collect drinking water near the Misti Pani'r Pukur pond. According to a 2014 study, pregnant women in coastal Bangladesh have high rates of preeclampsia and gestational hypertension, which, the authors hypothesized, are caused by saline drinking water.

Children in front of their temporary shelter on a river embankment. During Cyclone Amphan, they lost their houses. "Climate change is deepening the environmental threat faced by families in Bangladesh's poorest communities, leaving them unable to keep their children properly housed, fed, healthy, and educated," UNICEF executive director Henrietta Fore said after visiting Bangladesh in 2019. "In Bangladesh and around the world, climate change has the potential to reverse many of the gains that countries have achieved in child survival and development."

A boy walks on dried-up land near his home. Cyclone Amphan saturated the land with saltwater in 2020, making it unsuitable to cultivate crops. According to a 2019 UNICEF report, environmental disasters related to climate change threaten more than 19 million Bangladeshi children.

An older woman takes care of her animals. She lost her house during Cyclone Amphan and now lives in a temporary home on a river embankment. During cyclones, embankments collapse and saltwater enters the locality, flooding houses and cropland.

A woman heads to a pond with a jar and bottle to collect drinking water for her family. As women from coastal areas also must use saline water for doing household work like washing clothes and cleaning utensils, they may also suffer from issues related to the skin. Women commonly face higher risks and greater burdens from the lack of fresh water, which is linked to climate change.

All visuals by Zakir Hossain Chowdhury for Undark.

Zakir Hossain Chowdhury is a visual journalist based in Bangladesh covering climate change and human rights. His work has appeared in TIME, The Guardian, The Telegraph, and The Wall Street Journal, among others.