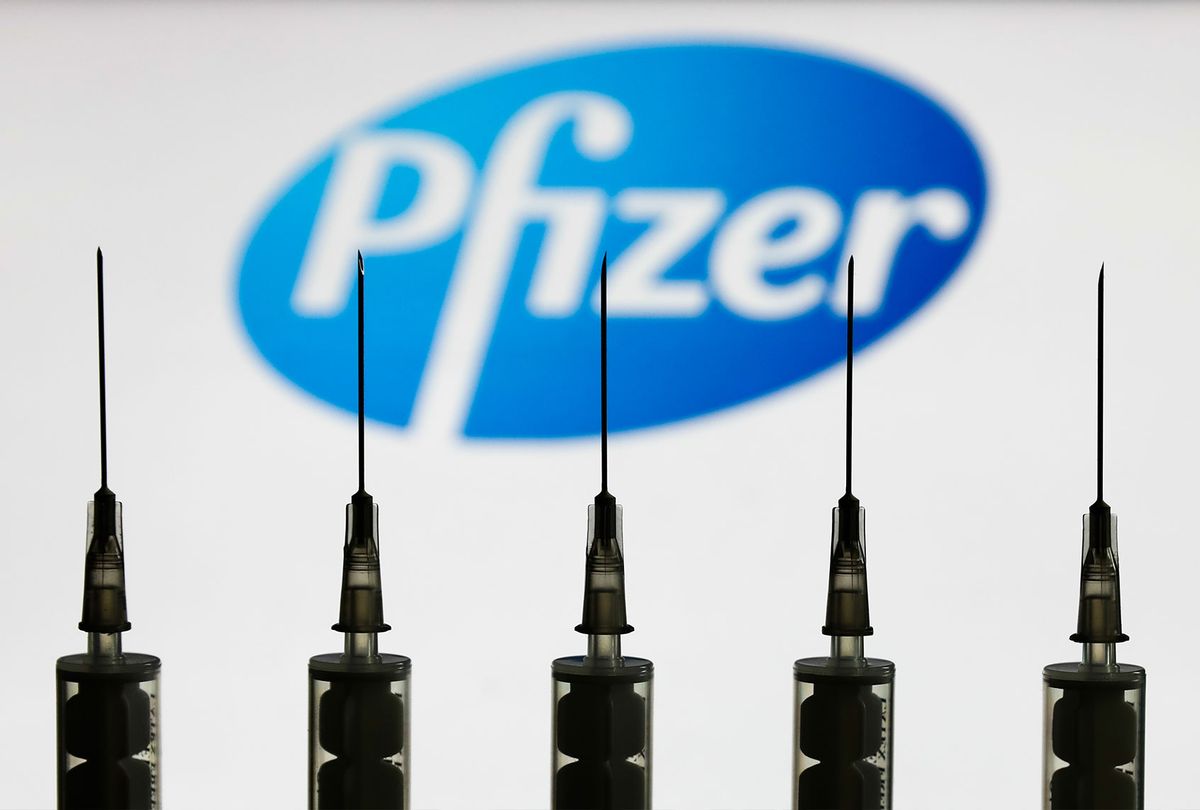 Medical syringes are seen with Pfizer company logo displayed on a screen in the background in this illustration photo taken in Poland on October 12, 2020. (Photo illustration by Jakub Porzycki/NurPhoto via Getty Images)
--

Chevron, the second-largest U.S. oil company, the Pentagon and New York City were among the first organizations to follow's Monday's milestone with new staff requirements for vaccination. Americans have so far received over 200 million doses of Pfizer's vaccine, according to AP News. Pfizer's shot, developed in conjunction with German biotechnology company BioNTech, is the first to gain full FDA approval, with Moderna and Johnson & Johnson still under authorization for emergency use.

"The FDA's approval of this vaccine is a milestone as we continue to battle the COVID-19 pandemic," Acting FDA Commissioner Janet Woodcock said in a Monday statement. "While this and other vaccines have met the FDA's rigorous, scientific standards for emergency use authorization, as the first FDA-approved COVID-19 vaccine, the public can be very confident that this vaccine meets the high standards for safety, effectiveness, and manufacturing quality the FDA requires of an approved product."

Pfizer CEO Albert Bourla said in a statement he hoped the FDA's rubber stamp "will help increase confidence in our vaccine, as vaccination remains the best tool we have to help protect lives."

A June poll conducted by the Kaiser Family Foundation found that 31% of unvaccinated people in the U.S. reported they'd be more likely to get the vaccine if it sees a full imprimatur from the FDA.

According to the FDA, the agency's approval only extends to Americans above the age of 16, with those 15 and under still ineligible to receive any vaccine.

Given the country's longstanding doubts about the vaccine's efficacy, experts speculate that the announcement may make state officials more amenable to the idea of vaccine mandates in schools and businesses.

"Mandating becomes much easier when you have full approval," Dr. Carlos del Rio of Emory University told AP News. "I think a lot of businesses have been waiting for it."

"For businesses and universities that have been thinking about putting vaccine requirements in place in order to create safer spaces for people to work and learn, I think that this move from the FDA, when it comes, will actually help them to move forward with those kinds of plans," US. Surgeon General Dr. Vivek Murthy echoed in a CNN interview on Sunday.

To get approval, Pfizer presented the FDA clinical data indicating that the vaccine is 91% effective in preventing COVID infection – a slight dip from when the drug was given emergency use authorization back in December.

The announcement comes as the U.S. continues to grapple with a new wave of coronavirus infections, seen particularly in parts of the South, where Republicans leaders have railed against mask and vaccine mandates over fears that such policies curtail individual liberties. However, over the past month, five southern states – Louisiana, Mississippi, Alabama, Arkansas, and Oklahoma – have seen vaccine uptake triple, perhaps signaling that conservatives areas are more movable than originally anticipated.