Another really good reason we need Medicare for All: Ron DeSantis will hate it

No, DeSantis isn't really spreading COVID just to boost profits. He's doing it because he wants to be president 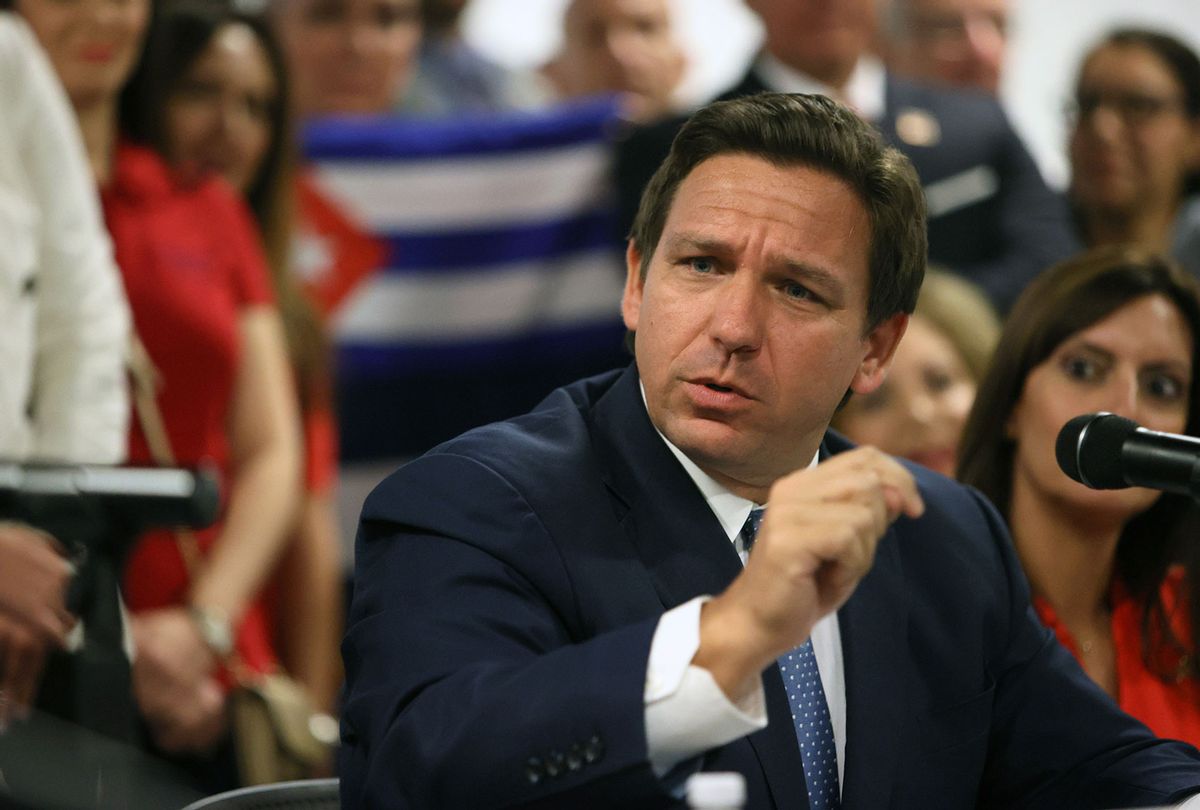 It has to be a scurrilous lie. Seriously: nobody is that evil.

Although it is the sort of thing that we've come to expect, because our unique-in-the-world, for-profit health insurance system leaves Americans financially vulnerable to sickness but offers huge profits to companies and CEOs in the system.

Some cynical people are suggesting that the reason Florida's Republican governor, Ron DeSantis, is forcing teachers and children to sit for hours every day in classrooms with unmasked children is because he wants them all to get infected with COVID … to make money for a friend of his.

Seriously. There's that theory out there, and it's almost too evil to believe it could be true.

That DeSantis is intentionally trying to expose children, families and public school teachers to a deadly disease simply because it'll make a few million extra dollars for his largest donor, billionaire Ken Griffin, whose fund is one of the biggest stockholders in the company that makes the only available monoclonal antibody drug approved to treat COVID.

And, of course, it might also take out a few hundred unionized teachers, a bonus in any Republican's book.

But it can't be true that DeSantis is spreading disease just to goose health care profits, can it?

After all, when the federal government offered to give Florida billions of dollars to expand its Medicaid program to provide free health care for the state's working poor, then-Gov Rick Scott and later Gov. DeSantis said a firm "no."

Even though all that money coming into the state to pay for health care could have goosed up the profits of any number of hospitals and health operations Griffin could invest in, DeSantis still refused to expand Medicaid statewide. (He did eventually sign an expansion of Medicaid for new moms, but it's a pittance and arguably a shout-out to the forced-birth crowd.)

Far more likely is that DeSantis just wants to win the Republican primary for president in 2024 and thinks having the Trump "base" and Fox "News" on his side will get him there.

After all, having hundreds of thousands of Floridians suffer disability or die — bankrupting family after family — just to score points with Donald Trump and Tucker Carlson demonstrates all the manly cred he'll need. Right?

It's another danger of having a for-profit health insurance system that doesn't cover everybody, so when a corrupt governor like DeSantis uses death and disease for political manipulation families end up ill, broke and desperate — as are millions of American families right now.

Whatever's going on with DeSantis, we're not Brazil and we really do need to get past behaving like a third-world country where the boss-man plays games with deadly diseases for political gain.

The best way to do that is to finally join pretty much every other developed country in the world and put into place a single-payer health care system like Medicare for All.

When this pandemic started, America had 87 million uninsured or underinsured citizens. As a result, a FamiliesUSA study found:

A national health care program that extended to all Americans would keep state governors from grandstanding on health care issues.  Even better, as in every other developed country in the world, it would provide a nexus for health data and a single point of advocacy for health consumers, something sorely lacking today.

And it would keep America healthy. As Public Citizen noted, "For every 10% increase in a county's uninsured rate, the researchers found a 70% increase in COVID-19 infections and nearly a 50% increase in deaths from COVID-19."

Uninsured people often live paycheck to paycheck and have no paid sick days, so they have little choice but to show up sick if they want to pay the rent and provide food for their families. It's well known that's how and why flu and other communicable diseases are transmitted by desperate low-wage workers and it's one of the strongest arguments for a national health care system.

Our failure to put into place a Medicare For All type of health insurance system causes uninsured or poorly insured people to postpone medical care early in the course of a disease, hoping to make it through without incurring medical expenses.

This is particularly dangerous with COVID: monoclonal antibody treatment works to cut the severity of the coronavirus infection, but only if given when first symptoms appear and before people are so sick they need hospitalization; after that point it's useless.

In a pandemic, a national health insurance and health care system becomes critical to keeping the public safe.

I open my new book, "The Hidden History of American Healthcare: Why Sickness Bankrupts You and Makes Others Insanely Rich," with the story of how Taiwan used the national database from its single-payer system to quickly put together a testing and contact-tracing system that kept the coronavirus at bay through the first year of the pandemic until vaccines became available.

Here, by contrast, our for-profit health insurance system is so corrupt that the Centers for Medicare and Medicaid Services (CMS) recently had to go after multiple insurance companies with the threat of huge fines for refusing to pay for all or part of COVID testing, even though paying for it was mandated by federal law.

When a single health insurance CEO — like "Dollar Bill" McGuire of UnitedHealth — can walk away with over a billion dollars, you know something is seriously screwed up.

Administering a health insurance system is one of the easiest, most banal and straightforward processes in the world, which is why most developed countries (and even small countries like Costa Rica) have the government perform that function with single-payer instead of letting for-profit leeches skim billions off the top.

The COVID pandemic has shown how well single-payer and other national systems work in countries like Canada and across Europe, where medical bankruptcies are largely unknown. It's similarly exposed how corrupt and dysfunctional the American patchwork-quilt for-profit system has become.

Medicare for All, similar to what Canada has, would save most American families thousands of dollars every year and do away with the 500,000-plus annual bankruptcies in this country that happen only because somebody in the family got sick.

But it would kill the billions every week in profits for the half-dozen corporate giants that dominate the health insurance industry and throw millions every year at politicians and PACs. So expect DeSantis and the Republican Party to continue to fight it tooth and nail.