Joe Biden's revenge: Drone attacks are fueling the "madness of militarism" in Afghanistan 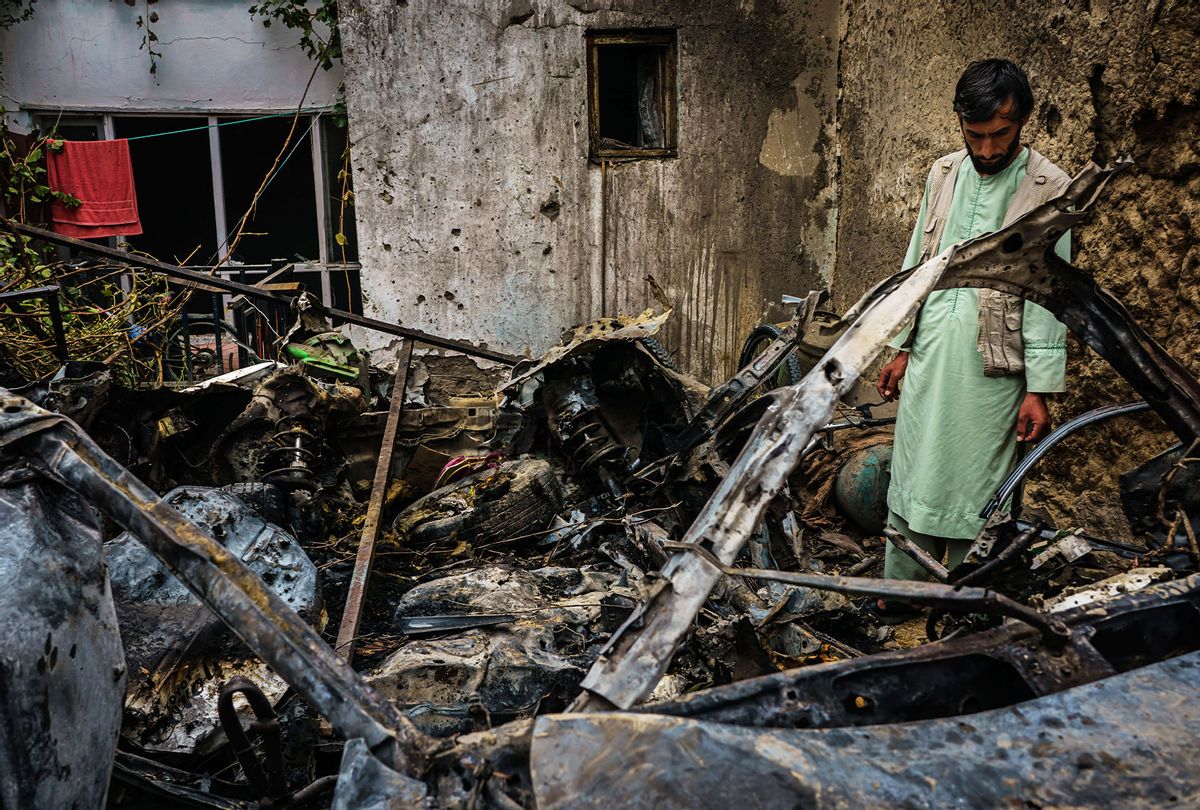 Relatives and neighbors of the Ahmadi family gathered around the incinerated husk of a vehicle targeted and hit earlier Sunday afternoon by an American drone strike, in Kabul, Afghanistan, Monday, Aug. 30, 2021. (Marcus Yam/Los Angeles Times/Getty Images)
--

Joe Biden provided a stirring soundbite days ago when he spoke from the White House just after suicide bombers killed 13 U.S. troops and 170 Afghans at a Kabul airport: "To those who carried out this attack, as well as anyone who wishes America harm, know this: We will not forgive. We will not forget. We will hunt you down and make you pay." But the president's pledge was a prelude to yet another episode of what Martin Luther King Jr. called "the madness of militarism."

The U.S. quickly followed up on Biden's vow with a drone strike in Afghanistan's Nangarhar province that the Pentagon said killed two "high-profile" ISIS-K targets. Speaking to media with standard reassurance, an Army general used artful wording to declare: "We know of zero civilian casualties." But news reporting told of some civilian deaths. And worse was soon to come.

On Sunday, another American drone attack — this time near the Kabul airport — led to reliable reports that the dead included children. The Washington Post reported on Monday that family members said the U.S. drone strike "killed 10 civilians in Kabul, including several small children." According to a neighbor who saw the attack, the newspaper added, "the dead were all from a single extended family who were exiting a car in their modest driveway when the strike hit a nearby vehicle."

Words that Biden used last Thursday night, vowing revenge, might occur to surviving Afghan relatives and their sympathizers: "We will not forgive. We will not forget." And maybe even, "We will hunt you down and make you pay."

Revenge cycles have no end, and they've continued to power endless U.S. warfare — as a kind of perpetual emotion machine — in the name of opposing terrorism. It's a pattern that has played out countless times in Afghanistan, Iraq and elsewhere for two decades. And it should not be a mystery that U.S. warfare has created still more "enemy" combatants.

But neither the U.S. mass media nor official Washington has much interest in the kind of rational caveat that retired U.S. Army Gen. William Odom offered during a C-SPAN interview way back in 2002: "Terrorism is not an enemy. It cannot be defeated. It's a tactic. It's about as sensible to say we declare war on night attacks and expect we're going to win that war. We're not going to win the war on terrorism."

By any other name, the "war on terror" became — for the White House, the Pentagon and Congress — a political license to kill and displace people on a large scale in at least eight countries, which are rarely seen, much less understood. Whatever the intent, the resulting carnage has often included many civilians. The names and faces of the dead and injured very rarely reach those who sign the orders and appropriate the funds.

Amid the Biden administration's botched planning for the pullout, corporate media have been denouncing the president for his wise decision to finally withdraw the U.S. military from Afghanistan. No doubt Biden hopes to mollify the laptop warriors of the Washington press corps with drone strikes and other displays of air power.

But the last 20 years have shown that you can't stop on-the-ground terrorism by terrorizing people from the air. Sooner or later, what goes around comes around.