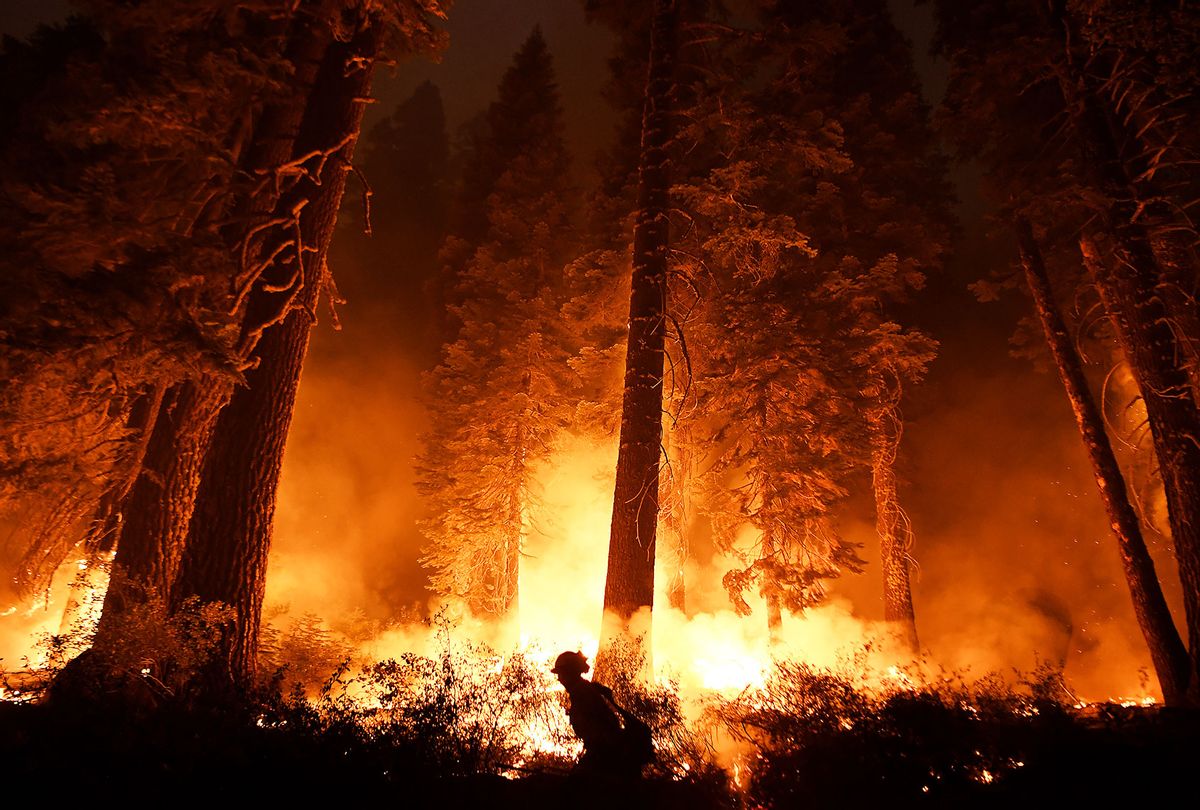 Between natural disasters and once-in-a-lifetime pandemics, the word "unprecedented" has perhaps been overused in the past year. Yet nature continues to shock us with new, previously unseen crises, warranting the adjective's use in print. That's especially true in the case of California's 2021 wildfire season, which is indeed unprecedented.

Currently, there are two massive wildfires burning across California's Sierra Nevada mountain range— the Caldor Fire, and the Dixie Fire. The Caldor Fire started on August 14, 2021. Over the last 17 days, it has burned 204,390 acres and is only 20 percent contained. As it encroaches on the Lake Tahoe basin, a popular vacation spot for Californians in the summer and skiers across the world in the winter, evacuation orders have been mandated in many neighborhoods and have even expanded from California to Nevada as many expect the massive fire to cross the state line.

According to CalFire, 544 homes and 12 commercial properties were confirmed destroyed as of early Wednesday morning. Less than two hundred miles north in the same mountain range, the Dixie Fire has been burning since July 14, 2021. To date, it has burned 844,081 acres, qualifying it as the second largest wildfire in California's history. Only 52 percent of it is contained. (The August Complex Fire from 2020, which burned more than 1 million acres, ranks first.)

Despite both the Dixie and Caldor Fires' location, they have another characteristic in common warranting the "unprecedented" label: both managed to burn from one side of the Sierra Nevadas to the other, raging across mountaintops that, in previous years, have had enough moisture and snowpack to stop fires, or at least slow them down.

Chief Thom Porter, of the California Department of Forestry and Fire Protection, said there have been no known fires to have burned from one side of the Sierra to the other — until now, according to the Los Angeles Times.

"Two times in our history and they're both happening this month," Porter said. "So we need to be really cognizant that there is fire activity happening in California that we have never seen before."

As rare as it is, Craig Clements, a professor and director of the Wildfire Interdisciplinary Research Center at San José State University, previously told Salon that he and his colleagues suspected that this years' wildfires would outpace 2020's. In April, Salon reported on how the California Bay Area's live fuel-moisture content (FMC), a metric which measures the ratio of moisture to natural combustible material, was historically low, signaling prime conditions for yet another catastrophic wildfire season. He believes both fires were able to travel from one side of the mountain range to the other because the fuel-moisture content at higher elevations is extremely low, too.

"What's unique about both these fires is that the fires have burned up into very high elevation in the Sierra Nevada," Clements said. "One reason that likely is the drought, lower snowpack . . . those higher elevations are drying out sooner, so, your fuel-moisture content in those plants are drier — and we predicted that in April that this was going to be the case."

Fire behavior, Clements explained, depends on the fuel, the fuel's condition, the weather, and the terrain. Clements added that the Wildfire Interdisciplinary Research Center's forecaster predicts that the Caldor wildfire will potentially cross into Nevada by today, Sept. 2.

Clements emphasized the center's wildfire forecaster is "experimental" and for research — meaning, it is not a national weather forecast — but it has been accurate throughout tracking these fires.

Still, this week's gusty conditions quite literally fanned the flames of both fires, making it more difficult to slow them down or contain them, which also played a role in the fire traversing the mountain range.

Historically, the granite ridge that overlooks the Tahoe basin has been viewed as a protective barrier that prevents fire from entering the area. But strong winds on Monday night helped spread embers onto the dry brush, setting fire on the other side of the mountain. The Dixie Fire traveled over its highest peak in mid-August, and continues to cause evacuations as it rages down the Sierra Nevada.

Near South Lake Tahoe, Calif., firefighters are now tasked with keeping the Caldor Fire up the hill, and trying to keep it from barreling down where it could burn the town.

"We're just right now trying to see what happens with the structures and businesses in our community and our homes," South Lake Tahoe Mayor Tamara Wallace told CNN. "There was a huge amount of granite between the fire and us and I woke up on Sunday and it had, it had jumped that granite and now it is in the Lake Tahoe basin and homes are threatened and our community is threatened and I never thought that was possible."

To keep future wildfire seasons from topping the previous ones, Celements said "we need to treat the landscape, we need to bring prescribed fire back, we also need to do a better job at fuel management, and allow low intensity fires to burn."

Indeed, as unprecedented as these fires are, some argue that we need to stop using superlatives to talk about the fires. Rather, this is just the new normal in California.

"Historically, we've used terms such as 'anomaly,' 'unprecedented' or 'extreme' to describe the wildfires that we have seen burn throughout the state over the past 10 to 20 years," said Cal Fire spokesman Chris Anthony. "These terms are no longer appropriate given the clear trends associated with drought, changing climate and un-resilient forest stands. Unfortunately, these factors contribute to the resistance to control that we are seeing with the Caldor fire."