Former Sen. Heidi Heitkamp now lobbies for tax loophole she called “one of the biggest scams” 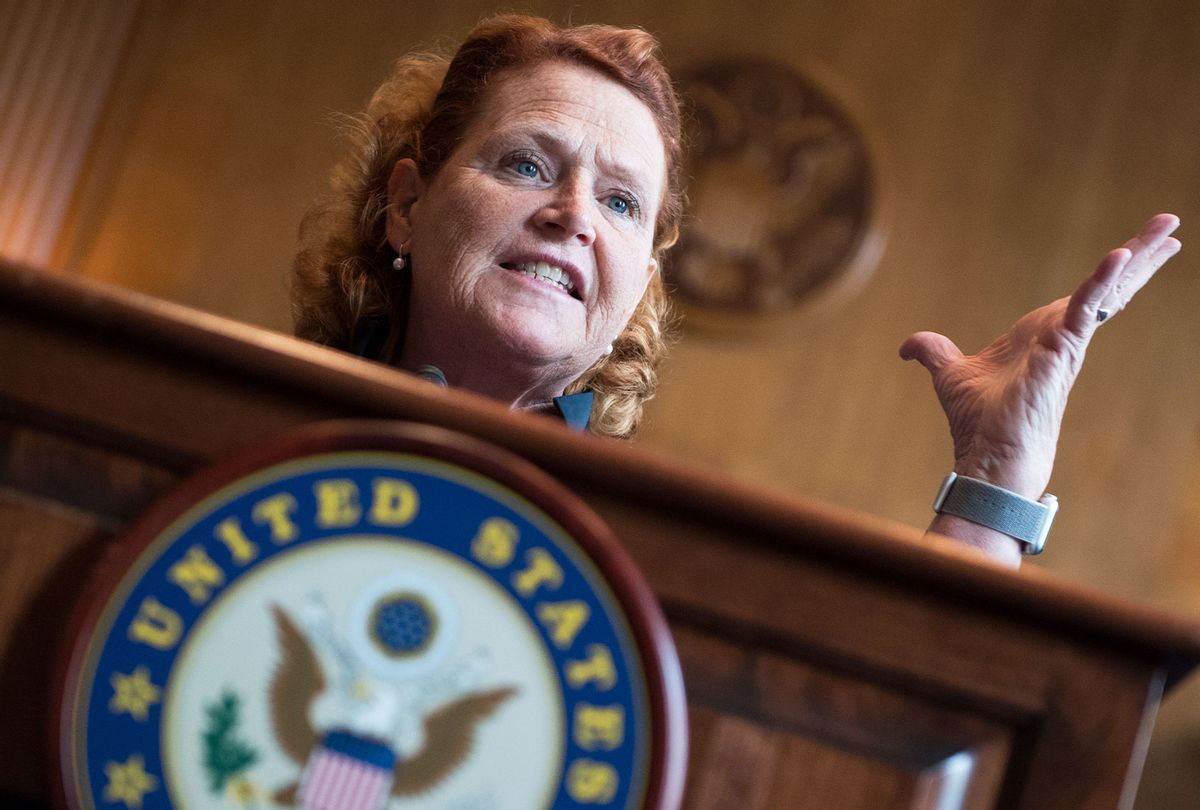 Former Sen. Heidi Heitkamp, a moderate North Dakota Democrat who was defeated in 2018 and has become a frequent cable-news commentator, is now leading a dark money group's effort to preserve a tax loophole that overwhelmingly benefits the wealthy. Just a few months earlier, Heitkamp had described the loophole as a "scam."

Heitkamp, who was passed over for a job in President Biden's Cabinet, now chairs a nonprofit called Save America's Family Enterprises (SAFE), a dark money group that does not disclose its donors but has launched a six-figure ad campaign to lobby against a key provision in the Democrats' $3.5 trillion budget proposal. The group aims to preserve the "stepped-up basis" loophole, which allows people to avoid capital gains taxes on inherited investments. Biden has called for closing the loophole to help pay for the spending plan, but Heitkamp has gone on a media blitz in the past week to "sound the alarm" over the proposal as big-money groups seek to water down key tax provisions in the budget framework.

It's a strange turn for a former lawmaker who voted against the 2017 Trump tax cuts for the wealthy and just five months ago decried the loophole when former New Jersey Gov. Chris Christie complained that capital gains taxes — which are paid on the profits of an investment when it is sold — amount to "double taxation" during an appearance on ABC News' "This Week."

"This is one of the biggest scams in the history of forever on income redistribution," Heitkamp told Christie in April. "If you have a tax — if you have a stock, you can pass it on to your kids with stepped-up basis, and it's never taxed. You know that there needs to be reform on unearned income. And so to demonize it and say it's going to hurt the little guy, yes, that just is not factual, Chris. And you know it."

The loophole overwhelmingly favors ultra-wealthy families and costs the United States more than $40 billion per year. Under existing law, if someone sells a stock or an asset they must pay capital gains taxes on "realized" assets, but if they instead leave stocks or assets behind to their heirs, under the "stepped-up basis" rule, the unrealized capital gains are never taxed at all. An estimated 64% of the wealth held by billionaires consists of untaxed capital gains that the government may never tax under the current rule.

Amy Hanauer, executive director of the Institute for Taxation and Economic Policy, told Salon that the current loophole "unfairly allows billionaires like Jeff Bezos to avoid paying income tax on most of their real income," because it comes from appreciation on his assets, which are now worth $99 billion more than they were 10 years ago. "That's not fair. At the very least, income tax should be paid on that income when Bezos dies and passes his assets on. That's what the Biden proposal to end the stepped-up basis rule would accomplish."

Biden's proposal seeks to claw back those untaxed billions to pay for part of his spending plan, which includes a massive expansion of health care, child care and education. Biden has proposed repealing the lower capital gains tax rate so that investment income is taxed the same as ordinary income earned in wages and salaries, which Heitkamp says she supports. But if the stepped-up basis loophole is not closed, wealthy people could avoid paying the tax simply by holding on to their assets until they die and then leaving them to their heirs.

Closing the loophole is "essential to make the rest of Biden's tax plan work," Hanauer said.

"You can't have it both ways," she said. "If you agree with Biden that unearned income going to wealthy people should be taxed at the same rate as earned income, you can't defend a tax break that allows lots of unearned income to escape taxes completely."

But after being hired by SAFE, Heitkamp is now making exactly the same argument she attacked in April.

She argued in an interview with The Hill last week that the proposal would hurt "middle-class families" and would force the sale of family-owned businesses and farms and family-owned properties like vacation homes.

That seems like a stretch. In fact, Biden's proposal includes exemptions for up to $1 million in unrealized gains for individuals and $2 million for couples, as well as additional exemptions for family-owned businesses.

"Heitkamp is ignoring what Biden's proposal actually would do," Hanauer said in an email. "Biden's plan does not apply to any family business or farm as long as the family continues to own and operate it. If they sell or stop operating it, then they'd have to pay the tax on the unrealized gains over $1 million (if inherited from a single person) or over $2 million (if inherited from a couple). And they would have 15 years to pay the tax!"

Heitkamp elaborated her position in an interview with CNBC on Wednesday, arguing that she was worried about farms that were family-owned but not family operated.

"Think about what that means. Some family who lives on Martha's Vineyard owns land in the Midwest that they don't run, but get income from," Hanauer said. "Heitkamp wants to make sure that if that absentee owner dies and passes the land on to an heir who has never set foot in the Midwest, the heir doesn't have to pay taxes. Tax policy should not be focused on protecting unearned income to an absentee inheritor of land someone else is working!"

"Now that we see an emerging entrepreneurial class within the Hispanic community and within the African American community, they won't be able to take advantage of these tax rules that will allow them to grow their business and keep capital in their business," she told the Hill.

That argument seems like a rhetorical dodge, given that the existing system overwhelmingly favors white people, who hold an estimated 84% of the nation's wealth, because the loophole inherently applies to income from wealth. There is little or no basis for arguing that the loophole helps people generate or build wealth; it primarily helps rich people hold onto the wealth they already have.

"Heitkamp is trying to preserve a system that leaves untaxed a type of income that surely flows disproportionately to white people," Hanauer said. "Heitkamp's approach would keep a tax code that entrenches white wealth and reinforces racial wealth inequality."

"No one can straightforwardly defend letting Bezos and other billionaires avoid capital gains taxes forever," he wrote on Twitter. "So they hide behind small businesses and/or minority-owned businesses. Typical DC."

Along with Biden and a growing roster of progressive and moderate Democratic lawmakers, even centrist economists like Lawrence Summers have called for closing the loophole. While the current plan has encountered some pushback from congressional conservatives, Republicans like Sen. Mitt Romney of Utah, and former presidential contender Jeb Bush have also called for end the loophole.

Heitkamp appeared to shift her argument on Wednesday, claiming that she is trying to protect Democrats from political blowback.

"I'm trying to sound the alarm, both economically and politically, for Democrats that this is not a path to walk," she said, even though polls have shown that the public overwhelmingly supports closing tax loopholes for the wealthy and there has been considerable outcry over leaked IRS data that showed how the rich avoid paying income taxes.

Heitkamp's push comes amid a lobbying frenzy aimed at watering down the tax increases that would be used to pay for the Democrats' big spending bill. Since Democrats can pass the bill without Republican votes, business groups have launched an expensive campaign to "divide" Democrats on the plan and have allied with centrists like Sen. Joe Manchin, D-W.Va., Sen. Kyrsten Sinema, D-Ariz., and Rep. Josh Gottheimer, D-N.J., all of whom have protested the price tag and various provisions in the proposal.

The moderates have also demanded that all the provisions in the spending bill be paid for, which was never plausible in the first place and is increasingly less likely given the forceful lobbying pushback. The capital gains tax increase has faced steep opposition from some Democrats and an increase to the estate tax is also reportedly unlikely. Though it is still early in negotiations, one analysis has found that about 75% of the proposed tax increases have already been axed amid the lobbying blitz.