After 8 years of marriage, I’m teaching my husband how to cook

On learning to let go in the kitchen — one imperfect, beautiful pasta at a time 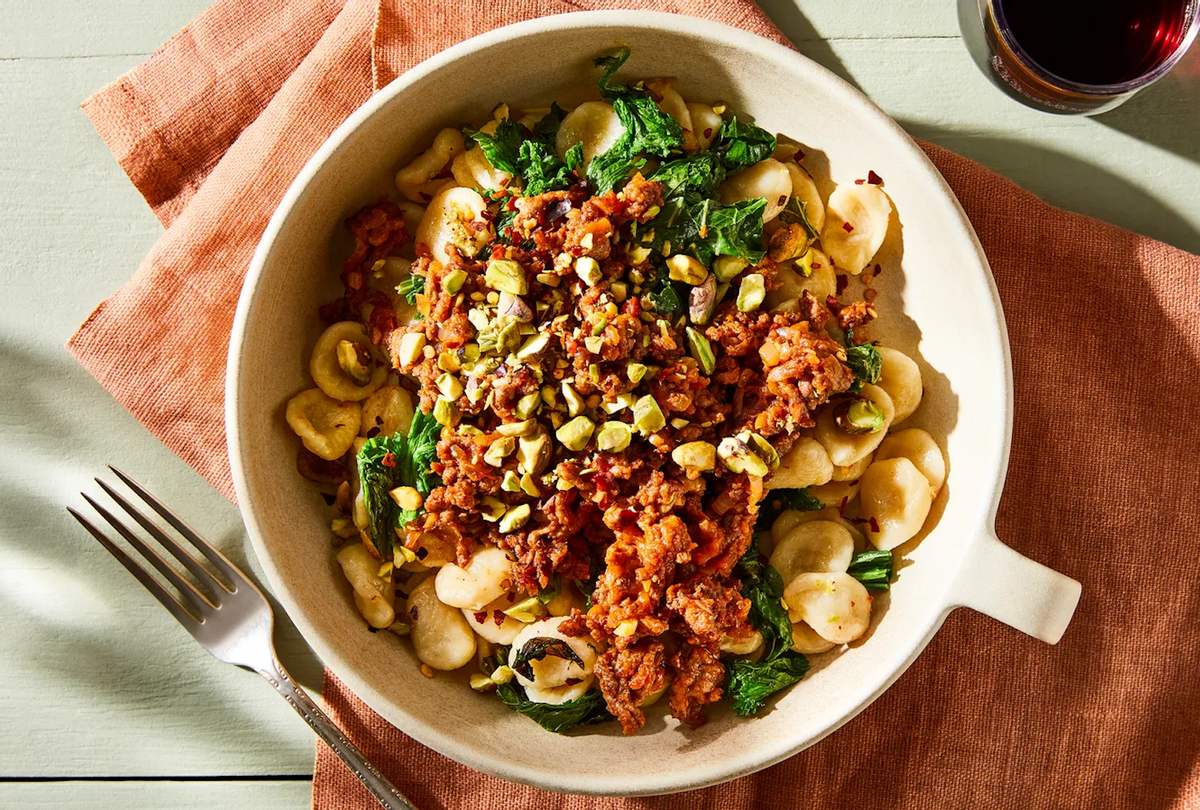 Thunk. Thunk. Thunk. The beat of the knife hitting the cutting board is slow and methodical. I say nothing. My husband is chopping garlic, and this is his pace, and after a year of biting my tongue about his speed, I accept it. After eight years of marriage, I'm teaching Jay how to cook.

When we first met, Jay owned a "good lasagna pan" and spoke of a Bolognese he liked to make, the smell of sausage and garlic filling his apartment as "it simmered for hours". Later I'd joke that his culinary interests faded as soon as we became serious. And why not? After all, I had worked as a cook in restaurants, written cookbooks, and spent years writing about food. I had the good knives, the copper sauté pan, the ability to jigsaw a meal together out of half a dozen disparate ingredients in the fridge and pantry. I took over the cooking, save for those things that are somehow indelibly seared into a certain male essence: burgers and steaks on the grill and mashed potatoes at Thanksgiving — plus, the annual production of a chicken curry he learned to make during a sabbatical spent volunteering in Zanzibar. Jay dabbled in food, but I owned it.

We often had friends over for dinner. I planned the meals, then shopped and prepped for hours (or days). Jay offered to help, but I relegated him to toasting crostini and setting up cheese boards while I ran circles around him doing everything else — a Tasmanian devil deriving grim satisfaction from my ability to get things done. We hosted epic dinners: legs of lamb on the grill, a dozen mezze, trays of sweets, and cheeses paired with jams I'd made from figs I grew on our deck. I whipped up paella with garlicky allioli, sourdough with homemade butter, lengua tacos and mole sauce. Jay lit the candles, put out water glasses, and did the dishes.

Then the pandemic hit. Stuck at home with just each other and without friends filling our table on Saturday nights, Jay asked if we could make cooking our entertainment. He wanted to be part of it.

In the kitchen for those first few meals, I was reminded of our inherent differences. While making a clean-out-the-fridge fried rice, I referred to carrots as more dense, and was treated to a lesson on mass. "Remember, I'm the physics guy," he told me. "And I'm the cook," I countered, explaining that carrots take longer to cook and onions have a higher water content.

I'd suggest he add oil to a hot pan, and he'd drizzle a few drops, wincing at my restaurant-y ways of pouring a full glug into the pan. I told him to season his vinaigrette with salt, and he asked me how much. As much as it needs — taste it! He stared at me, unblinking. Jay doesn't trust that he knows what it means to "salt to taste"; he needs numbers and measurements, not a suggestion to just go with it. In physics and math, you write a proof to show that the rules don't work. Jay wants to follow strict directions; he thinks in spreadsheets. I think in run-on sentences.

As I tried to explain how he should hold his knife to chiffonade herbs, he sighed.

"What am I doing wrong this time?"

I stopped. I realized that Jay didn't forget how to cook when I moved in, he just ceded to me the territory I wanted. But also, I had pushed him out of the kitchen, off my turf. I began to question why I had created that dynamic; I was a feminist, not someone clinging to a traditional wifely role. Was I so enamored of being "the cook" that I valued it over being an equal partner? Deep down, I thought cooking was the magic I brought to our daily life. But doing so fed into my tendency to equate my productivity with my worth. Sharing the work — and the glory — felt good.

As quarantine endured, Jay developed more skills, and I learned patience. I showed him how to roll out pizza dough and use a pizza peel to flick the pizza into a burning-hot oven. It's OK if it's misshapen; this was for us, not Instagram. We cheered each other through a disastrous attempt to make injera. We laughed throughout an evening of making falafel and later told each other that it was better than any other falafel we've had.

But pasta was where we really relaxed. I showed him how to run the dough through our hand crank pasta roller and instructed him to feel it, to create the tactile memory when it is too wet, when it is dry and crumbly, when it is perfectly smooth and elastic. He got frustrated when his ravioli fell apart, and I reminded him that I have made it a hundred times before; he shouldn't expect to be as good on his third or fourth try. He got better every time. His Bolognese made regular appearances, and when a friend had a baby or got sick, we layered it into a lasagna together.

One night, we decided to make orecchiette. The dough was far too stiff. Shaping the pieces took forever as we tried to mimic a video of an Italian grandmother flattening and shaping the little cups of dough in a single movement. We pushed our thumbs into the disks, imprinting our relationship on each one; sometimes messy, sometimes too much or too little, sometimes resembling the ideal.

Cooked, the pasta was chewy, thick — an amateur's job. But tossed with browned sausage and rapini, topped with slivers of toasted garlic and a sprinkle of crushed red pepper flakes, it was good. And the next time we made it, much better. We kept going and made it our own. As it turns out, we could work at something together, and it could be imperfect but beautiful — his, mine, and ours.