Leaded gasoline is finally gone — but its toxic legacy lingers

"The lead is still there in the soil" 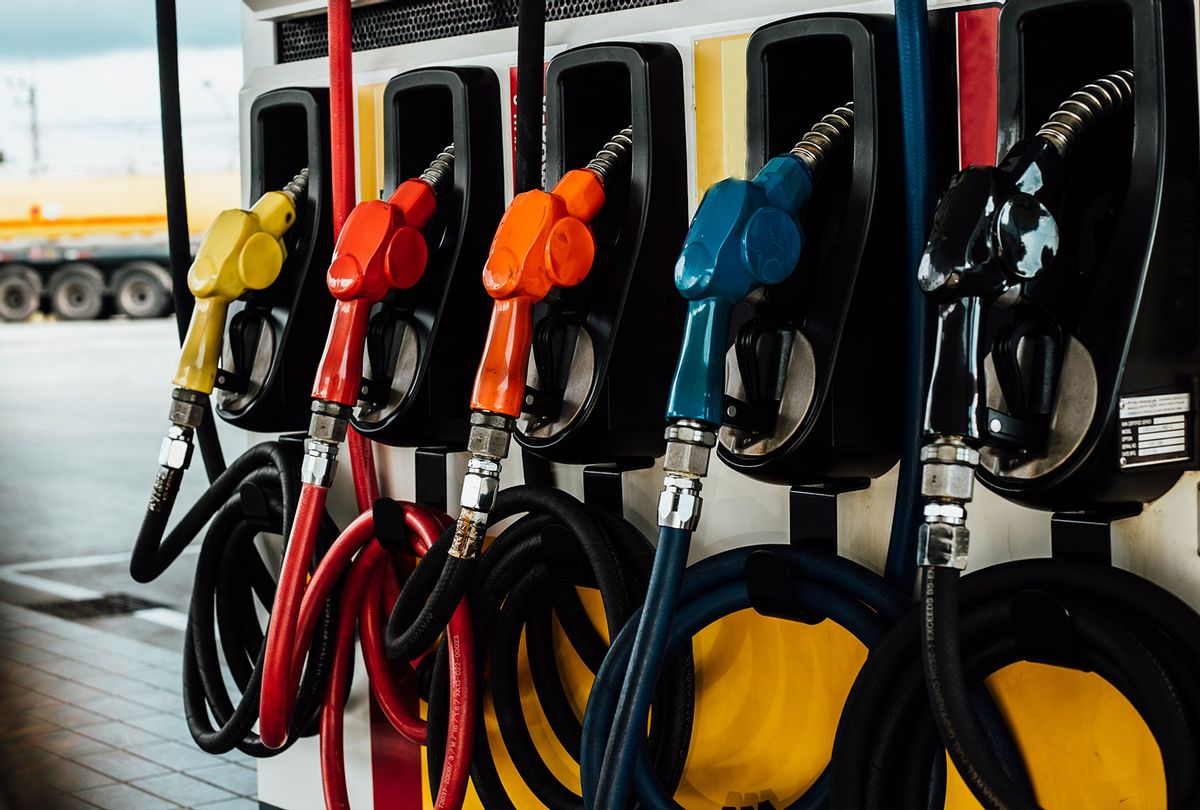 In 1921, General Motors engineers discovered that tetraethyl lead could make internal combustion engines run more smoothly and reduce engine knock. For the next 100 years, the toxic additive in automobile gasoline contaminated the environment and endangered public health. As of this week, however, lead has finally been phased out of all global gasoline use — a nearly two-decade effort led by the United Nations Environment Programme, or UNEP, involving a coalition of scientists, nongovernmental organizations, fuel and vehicle companies, and governments, including the U.S. Environmental Protection Agency.

"Lead in fuel has run out of gas thanks to the cooperation of governments in developing nations, thousands of businesses, and millions of ordinary people," said United Nations Secretary-General António Guterres in a pre-recorded message during a press conference announcing the phase-out of the "major threat to human and planetary health" on Monday.

Despite the success of the UNEP-lead coalition in eliminating the use of leaded gasoline across the globe, however, the coalition was unable to clearly identify plans to address what scientists say is a continued public health threat: the legacy of leaded particles from gasoline emissions that settle in the soil and continue to haunt urban centers around the world. Countries that most recently phased out leaded gasoline will face challenges similar to those in U.S. cities, where researchers have found that residents of highly trafficked urban centers are exposed to lead particles in the soil that are resuspended into the atmosphere during the summer and fall, particularly during hot, dry weather.

"The same patterns that we were seeing of soil lead contamination in [U.S.] urban areas is likely to have occurred internationally in every city which has used leaded gasoline," Mark Laidlaw, a geologist and environmental scientist who has conducted extensive studies on lead exposure in the U.S., told Grist.

Laidlaw's studies have shown that the soils in older urban areas remain highly contaminated by lead due largely to leaded gasoline emissions, leaded paint, and industrial lead sources. This lead is reintroduced into the atmosphere as soil dust. While the amount of lead deposited in the soil of each city will vary depending on how much traffic it's seen historically, Laidlaw said that these soils remain a major source of blood lead poisoning, particularly for children.

"I think it's a great thing that they've eliminated the lead from gasoline," said Laidlaw, who now works as an environmental consultant in Australia. "It's damaged the health of hundreds of millions of people, but it hasn't gone away. The lead is still there in the soil."

When the United Nations-led initiative, known as the Partnership for Clean Fuels and Vehicles, was launched nearly 20 years ago, 117 countries were still using leaded fuel. The campaign's first major success was when all Sub-Saharan African countries switched to unleaded gasoline in 2006. The final country to switch to unleaded fuel was Algeria in July of this year. Today, there are no countries still using the toxic fuel additive, according to the UNEP.

Luc Gnacadja, who served as minister of environment, housing and urban planning for the West African nation of Benin from 1999 to 2005, noted during the press conference that by 2000, airborne lead pollution in cities had topped the list of environmental health issues in Benin. The socioeconomic cost of leaded gasoline in four of Benin's major cities was estimated to be the equivalent of 1.2 percent of the country's gross domestic product in 2010.

"The joint action of UNEP and the Partnership for Clean Fuels and Vehicles has been instrumental in supporting and facilitating sub-Saharan African countries' transition to unleaded gasoline," said Gnacadja.

The UNEP estimates that eliminating the use of leaded gasoline globally will prevent more than 1.2 million premature deaths from heart disease, strokes, and cancer each year. It will protect children from the irreversible effects of lead poisoning and save as much as $2.44 trillion per year in costs that otherwise would have been spent to address the effects of lead poisoning.

Howard Mielke, an urban geochemistry and health expert at Tulane University's School of Medicine, has spent four decades investigating the hazards posed by lead contamination in soil across the country  — from Baltimore, Maryland, to Minnesota's Twin Cities to New Orleans, Louisiana, where he is based and has mapped lead soil levels over the course of more than 20 years. His research and that of other experts have shown that invisible mountains of lead exist within urban centers across the country. Mielke's research in Baltimore, where he discovered contaminated urban gardens, triggered his subsequent studies, when he realized that the contamination was national in scope.

"It's a much bigger problem than I ever thought," said Mielke. "I'd like to help people understand why we need to do things, especially within the interior of the city where the accumulations are highest, so that future generations will not suffer from the same problems that the current generations have been suffering from."

In a 2020 article in the medical journal Current Problems in Pediatric and Adolescent Health Care, Mielke and his colleagues described soils contaminated by tetraethyl lead as "an insidious exposure reservoir," because the health impacts have persisted even after regulatory victories, primarily for low-income children and children of color who live in these urban centers. Black children are disproportionately burdened by lead exposure nationwide, and in some states, such as California, Latino children represent a majority of the state's lead poisoning cases.

A study published earlier this year shows that lead particles deposited in London's soil throughout the 20th century continue to pose a threat to Londoners as contaminated dust is recirculated in the air in highly trafficked streets. "One of the things that the London study has demonstrated is that air lead continues to be high, even though there's a tremendous reduction in blood lead, but they can't get it down any further without changing the atmosphere," said Mielke. "And that's what I've been working on."

Janet McCabe, a deputy administrator at the U.S. Environmental Protection Agency, or EPA, emphasized during the press conference the importance of protecting the most vulnerable from lead exposure's life-altering impacts. "We know that we need urgency across all our public health efforts. And in the United States, we now have a president who understands and feels this urgency," said McCabe. "President Biden is deeply committed to confronting the environmental challenges we face, challenges that disproportionately harm our children — and that includes reducing lead exposure."

McCabe noted that both the EPA and the World Health Organization agree that there is no known safe level of lead exposure, and she outlined the EPA's key initiatives to address sources of lead in the environment that endanger U.S. communities. These include lead in drinking water, deteriorating paint, residual lead in soil from decades of motor vehicle emissions, and the cleanup of contaminated sites where industries have emitted lead. But the primary focus of the EPA is what she described as a gargantuan infrastructure effort to replace water service lines that include lead fixtures.

In response to a question from Grist regarding next steps to address soil lead contamination stemming from leaded gasoline use around the globe, the coalition was unable to provide specifics. McCabe, however, acknowledged that legacy contamination is an issue in many U.S. neighborhoods and communities where the soil in residential yards is contaminated with a combination of legacy auto emissions, deteriorating lead paint, and industrial emissions. She noted that some of the most contaminated areas are placed in EPA cleanup programs, and she emphasized awareness programs to educate the public about steps individuals can take to protect themselves from lead exposure, such as growing vegetables in raised beds, covering bare soil with mulch or other types of covering, and cleaning indoor surfaces of lead dust.

Studies have shown that cleaning efforts to remove contaminated dust indoors don't impact children's blood lead levels. Instead, Mielke recommends that cities pinpoint soil lead hots by mapping soil lead levels and focusing remediation efforts in areas where children are most likely to play. Cleanup efforts he's overseen in New Orleans involve covering contaminated soil with a geotextile fabric, a clean soil cap, and vegetation. The solutions to address contaminated soil lead exist, but they require the political will and funding to implement, according to Mielke.

"Generation after generation living in the same place in the city, they're running into the same problems," said Mielke. "And that can be resolved, but it takes concerted effort."

One of the earliest and most adamant critics of leaded gasoline in the 1920s was Yandell Henderson, a Yale University physiology professor who warned the U.S. government that lead exhaust from cars would cause widespread chronic lead poisoning in urban centers. In a 1925 New York Times article, Henderson warned of the dangers the public faced from leaded gasoline polluting the atmosphere. While he emphasized the need for Congress to intervene to prevent this exposure, Henderson predicted this would not happen and that instead "conditions would grow worse so gradually and the development of lead poisoning will come on so insidiously … that leaded gasoline will be in nearly universal use and large numbers of cars will have been sold … before the public and the government awaken to the situation."

The perils of ignoring the public health experts at the cost of the environment and human health have been evident over the past century, said UNEP Executive Director Inger Andersen during the press conference. "Leaded fuel illustrates in a nutshell the kind of mistakes that humanity has been making at every level of our societies; the kind of mistakes that have brought us to the triple planetary crisis: the crisis of climate change, the crisis of biodiversity loss, and the crisis of pollution," said Andersen. She noted that the fuel and vehicle industries' rush to adopt tetraethyl lead, despite its grave public health implications, led to tremendous damage.

"But the global response to leaded fuel shows that humanity can learn from and fix mistakes that we've made," said Andersen. "We got where we are today thanks to this innovative public-private partnership."