In his new book, New Yorker writer Eyal Press profiles the workers we won’t see politicians sidling up to 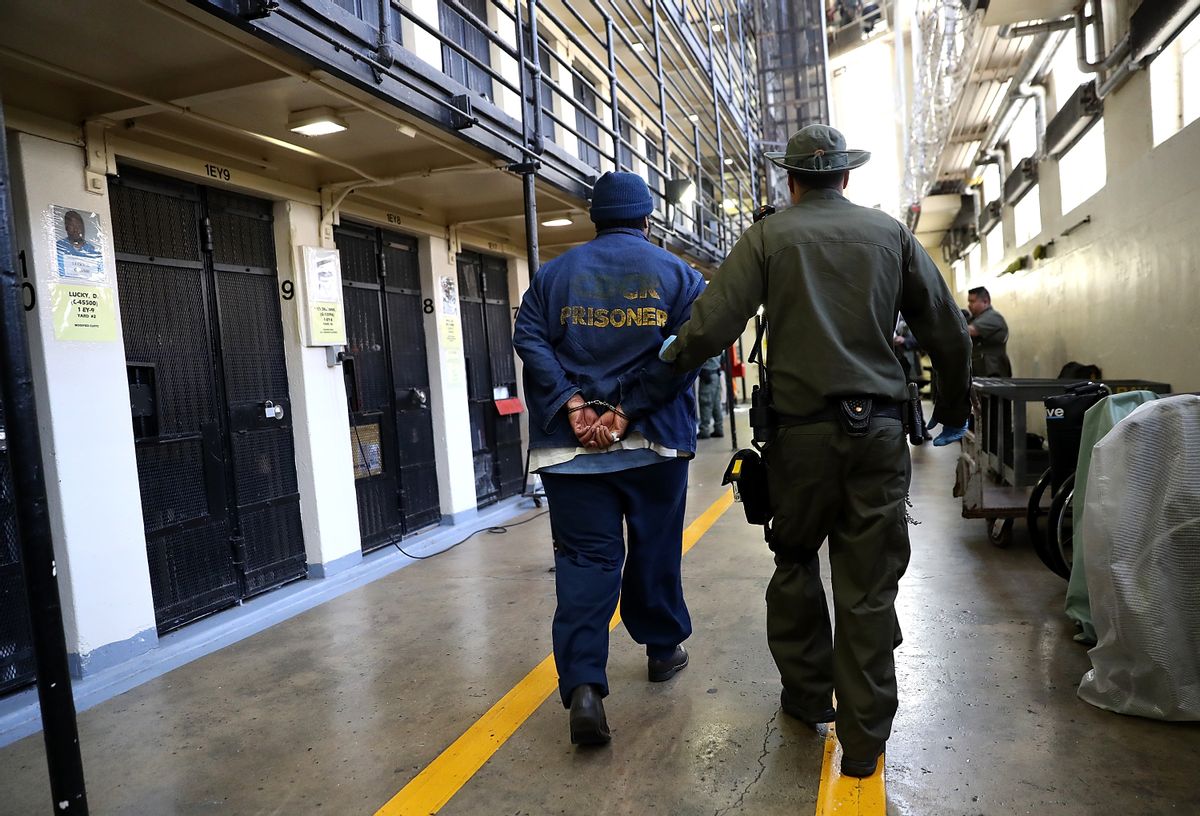 In his new book, Dirty Work: Essential Jobs and the Hidden Toll of Inequality in America, New Yorker writer Eyal Press profiles the workers we won't see politicians sidling up to for photo ops this Labor Day. He writes about drone operators, prison guards, poultry plant workers, and oil riggers. They do our dirty work and, as Press shows, they pay a price for it.

Flor Martinez, a Texas poultry plant worker, devours painkillers at the end of her grueling shifts. Stephen Stone's dangerous job on the ill-fated Deepwater Horizon drilling rig puts him in the way of a massive explosion that almost cost him his life. But Press is most interested in documenting a kind of hazard that is not typically accounted for in government safety reports: what he calls "moral injury." He borrows the term from military psychologists. It describes the impact of having to carry out tasks that violate a person's core sense of self.

Those psychic injuries can take a physical toll. Harriet Krzykowski, a mental health counselor, is so traumatized by the moral compromises her harrowing prison job entails that her hair begins to fall out in clumps. An analyst with the military's drone program suffers headaches, night chills and joint pain. Press' project is to ensure that a complacent public — those of us who consider ourselves at a remove from the jobs he describes — takes responsibility for our part in creating the conditions that allow "dirty work" to occur.

The book, published by Farrar, Straus and Giroux, has particular resonance in a post-COVID world that has highlighted the divisions between those forced to work in hazardous conditions and those with the luxury to shelter at home. It also provides a framework to examine a decades-long war in Afghanistan staffed by a military whose casualties are increasingly borne by those from less affluent communities. Would the occupation of that country have continued for so long if the sacrifice that accompanied it had been more broadly shared? Press sat down with Capital & Main for a phone interview about his book.

Capital & Main: Can you start us off by defining "dirty work"?

Eyal Press: Dirty work in my book refers to an unethical activity that society passively condones but doesn't really want to hear too much about…It's work that causes substantial social harm, harm to other people or to the environment or nonhuman animals. The second feature is that it causes harm to the people who do it because it makes you feel tainted and implicated in this harm.

You begin the book with the story of a mental health worker who is keeping quiet about abuses that she's witnessing at a private prison in Florida. The toll of the silence is really heavy. Can you talk about her?

A basic tenet of medical ethics is that you advocate for your patients and you protect them from harm…but Harriet works in a prison where guards call the shots and also provide her with security.

Early on in her tenure there, she complains when the guards aren't letting prisoners into the rec yard, where they get fresh air. They immediately retaliate against her for this complaint by leaving her alone in the rec yard and in group sessions that she runs. She feels very unsafe and, on one occasion, she's nearly assaulted.

So Harriet learns the lesson that every mental health professional in a prison learns, which is: Don't defy security. But that self-protective move gets really troubling when she comes to work one day and hears that a prisoner named Darren Rainey was locked in a scalding shower, which he couldn't turn the water off because it was controlled from the outside by guards.…Rainey collapses in the shower and dies a very gruesome death. Burns were found all across his body, the autopsy photographs would later show, and Harriet hears all this from nurses at that facility.

She's horrified. But no one on the mental health staff reports it. Here is an example of what I mean by dirty work: the harm to the prisoners, to Rainey, and to others. But it's also the harm to the workers who become accomplices. And on one level you could say, well, they deserve the harm they're getting. But when they read Harriet's story, readers need to ask themselves how differently they would act in that situation. And the real problem is the structural situation, which is that this care is being provided in a violent and brutal environment.

Bill Curtis, a corrections officer from another prison, justifies his failure to blow the whistle on the brutality he's witnessed by saying, "The citizens of Florida got what they paid for." What does he mean by that?

In the case of these abuses in the Florida prisons, the easy culprits are the guards. The guards who did these horrible things certainly are responsible and they should be held accountable. But as I write in the book, at the time these abuses were happening, Florida spent the second least of any state in the United States on mental health services. They had the third-largest prison system in the United States. So essentially jails and prisons are solving a problem for a society that has not adequately funded its public mental health system. You have so many people, particularly poor people, for whom a mental illness is effectively criminalized.

And Curtis learns as a corrections officer, that when you have no programming and you have thinned-out staff and you have underfunded facilities that are overcrowded and full of people who probably should be in a mental health hospital rather than a prison, the only way that order gets enforced is through brute force. That is indeed what he told me.

Your book expands the definition of inequality beyond the economic. You point out that we have a public that's increasingly separated from dirty work and the emotional burdens that accompany it.

This is fundamentally a book about inequality, but as you say, inequality through a slightly different lens. The familiar lens, the economic one, is concentrated wealth — the huge gap between what CEOs get paid and what ordinary workers get paid. And that's extremely important. And that's one manifestation of inequality, but inequality doesn't always manifest in material form. And my book is about what I call moral inequality and what I try to show is that we ended up delegating the dirty work in our society to people with fewer choices and opportunities. It's not the elite or the privileged who work in places like the Dade Correctional Institution. It's not the elites who work in the industrial slaughterhouses. It's not elites who become roustabouts and end up working on oil rigs like the one I look at, which is in fact the one where the Deepwater Horizon blast took place.

The wife of the oil rig worker you profile complains that there was more attention paid to pelicans and dolphins than to the 11 rig workers who died in that explosion.

That was one of the more heartbreaking things I heard. As you said, the wife of Stephen Stone, the rig worker I wrote about, talks about going to these congressional hearings after the Deepwater [Horizon] explosion and seeing all these congressmen holding up pictures of the victims and the pictures they held up were pictures of pelicans. That's hugely important because there was a tremendous impact on wildlife and the environment. But inside that room were widows, people whose husbands and brothers had died on that rig, and no one held up pictures of them. It drove home the point for some of these rig workers' families that nobody really cares about them. The reason for that was put so powerfully by Stephen Stone, the rig worker I wrote about. He said, "People see the birds as innocent. Whereas the workers, guys like me, well we kind of got what was coming to us because we work in this industry."

I'm not saying that people who work in the oil industry aren't dirty. But let's extend that one out. Why do we drill so much? And what drives the fracking and drilling and the whole fossil fuel dependence of this country? Well it's consumer demand, right? It's the way we live our lives. And the fact that America burns somewhere on the order of a quarter of the world's fossil fuels, that's as much ours to own as it is the workers on the front lines.

You write that there's something that we can learn from how society treated doctors and nurses in the COVID wards. Can you talk a little bit about that?

I was really struck when the pandemic happened at the conversation that unfolded — two conversations really. One was just how, as a society, we rely on all these low-wage, invisible workers, delivery drivers and warehouse handlers, who do these essential jobs.

But the second thing that happened is that we started to have a conversation about how work can be morally injurious…And as you said, it was the nurses and doctors on the front lines who were suddenly having to do triage. Who gets the last ventilator in a ward filled with COVID patients? And doctors and nurses were saying, "This is excruciating and scarring me. I can't sleep at night." And again, I was struck, wow, that that's exactly what I heard from Harriet and from the people I wrote about.

And so the key difference is that the doctors and nurses on the front lines of the pandemic are seen as heroes — and rightly so, by the way, for doing something essential and difficult and noble. But dirty workers are not treated as heroes. To the contrary, they're often stigmatized and shamed. We really need to think about why that is.

And so what's the answer to that? What should our response be? Is it to support the work that they do or to support them or change policy?

Certainly for some forms of dirty work I look at, like in slaughterhouses and offshore drilling, the government has a crucial role to play. If there are no safety protections, more workers die and their conditions are more brutal and demeaned. If we speed up the lines and slaughterhouses, more people get injured, the turnover is faster. So certainly there's a role for the government. But in a larger sense, I would say that just as the responsibility for dirty work is collective, the potential solutions to dirty work…are collective.

Of course, you can make a choice as a consumer, and not buy meat produced in an industrial factory. You can feel a little better about your personal choice there, but it doesn't do much to alter our industrial food system unless we really collectively act. Right? Same thing with fossil fuels, same thing with allowing jails and prisons to serve as de facto mental health asylums. All of these things require collective action.