"Multiple connections" were found between two Saudi nationals living in the U.S. and some of the hijackers 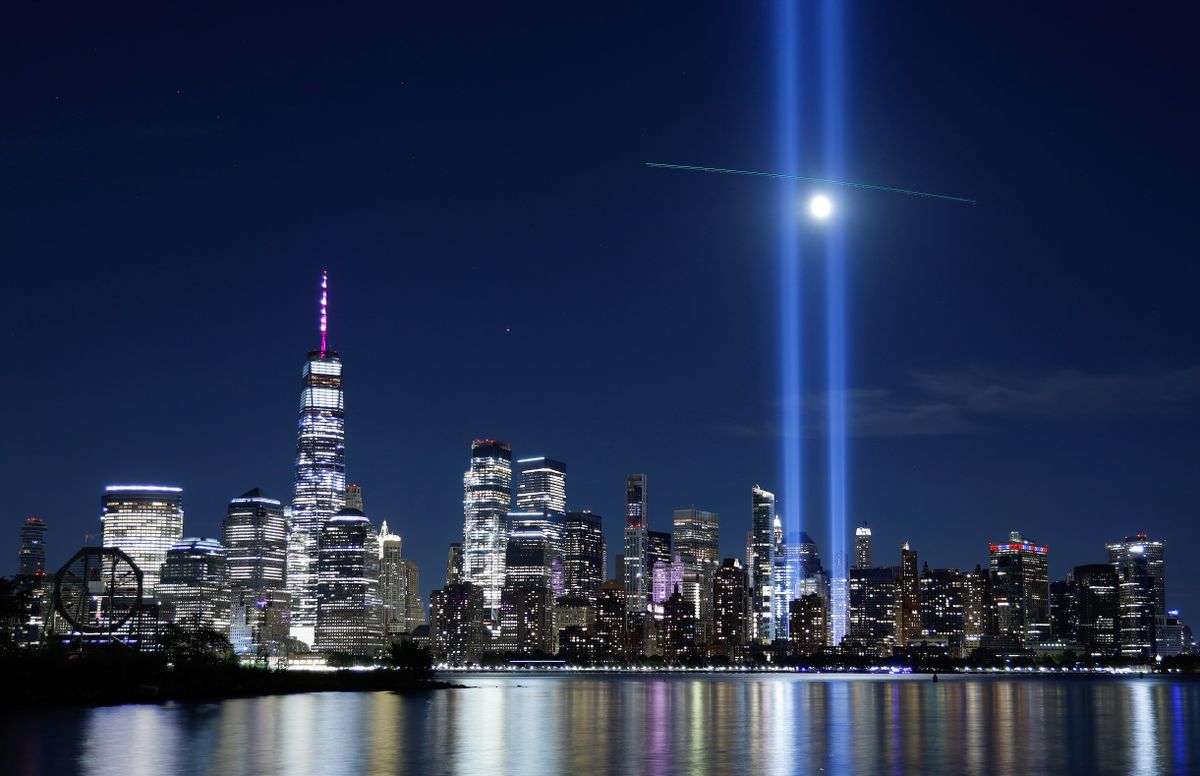 A passing helicopter creates a cross through the beams of the Tribute in Light as it is tested over lower Manhattan and One World Trade Center in New York City. (Gary Hershorn/Getty Images)
--

The Federal Bureau of Investigation on Saturday night released a previously withheld document related to its probe of the September 11, 2001 attacks and allegations of Saudi government support for the plane hijackers.

The 16-page document, which was written in 2016 and remains heavily redacted, is the first of several classified records expected to be published in the coming months following an executive order issued last week by U.S. President Joe Biden.

CNN reported that the newly declassified document, which summarizes an investigation called Operation ENCORE, "provides details of the FBI's work to investigate the alleged logistical support that a Saudi consular official and a suspected Saudi intelligence agent in Los Angeles provided to at least two of the men who hijacked planes."

"It details multiple connections and witness testimony that prompted FBI suspicion of Omar al-Bayoumi, who was purportedly a Saudi student in Los Angeles but whom the FBI suspected to be a Saudi intelligence agent," CNN noted. "The FBI document describes him as deeply involved in providing 'travel assistance, lodging and financing' to help the two hijackers."

In addition, NPR noted that while the 9/11 Commission Report released in 2004 "was largely unable to tie the Saudi men to the hijackers, the FBI document describes multiple connections and phone calls."

According to the news outlet:

Years ago, the Commission wrote that when it came to the Saudi diplomat Fahad al-Thumairy, "We have not found evidence that Thumairy provided assistance to the two hijackers." A decade later, it appears FBI agents came to a different conclusion. The report says Thumairy "tasked" an associate to help the hijackers when they arrived in Los Angeles, and told the associate the hijackers were "two very significant people," more than a year before the attacks.

Although the FBI document "outlined contacts between the hijackers and Saudi associates," it supplied "no evidence the government in Riyadh was complicit in the attacks," Reuters reported.

Last week, the Saudi embassy in Washington, D.C., said in a statement that it "welcomes the release of" the documents, and that "any allegation that Saudi Arabia is complicit in the September 11 attacks is categorically false."

"As past investigations have revealed, including the 9/11 Commission and the release of the so-called '28 Pages,' no evidence has ever emerged to indicate that the Saudi government or its officials had previous knowledge of the terrorist attack or were in any way involved," the embassy added.

Fifteen of the 19 hijackers were from Saudi Arabia. A U.S. government commission found no evidence that Saudi Arabia directly funded al Qaeda, the group given safe haven by the Taliban in Afghanistan at the time. It left open whether individual Saudi officials might have.

The families of roughly 2,500 of those killed, and more than 20,000 people who suffered injuries, businesses and various insurers, have sued Saudi Arabia seeking billions of dollars.

According to NPR, "While the report does not draw any direct links between hijackers and the Saudi Arabian government as a whole, Jim Kreindler, who represents many of the families suing Saudi Arabia, said the report validates the arguments they have made in the case."

"This document, together with the public evidence gathered to date, provides a blueprint for how al-Qaeda operated inside the U.S.," he said, "with the active, knowing support of the Saudi government."

In response to public disclosure of the FBI document, 9/11 Families United said in a statement that "this report and other evidence confirms that it was a group of Saudi government officials affiliated with the Kingdom's Ministry of Islamic Affairs, the cradle of Wahhabi extremism within the Saudi government, who came immediately to their aid as they commenced their terrorist preparations."

"Even with the unfortunate number of redactions, the report contains a host of bombshell new revelations, implicating numerous Saudi government officials, in a coordinated effort to mobilize an essential support network for the first arriving 9/11 hijackers, Nawaf al Hazmi and Khalid al Mihdhar," the organization continued. "The range of contacts at critical moments among these Saudi government officials, al-Qaeda, and the hijackers is stunning."

"Now the Saudis' secrets are exposed and it is well past time for the Kingdom to own up to its officials' roles in murdering thousands on American soil," Terry Strada, whose husband Tom was killed in the attack, said on behalf of the group.

Saudi Foreign Minister Prince Faisal bin Farhan, however, "reaffirmed Sunday that his country welcomes the decision by the U.S. to release classified documents relating to its investigation of the attacks, saying the documents 'would completely show that there was no (Saudi) involvement' in the attacks," CNN reported.

Biden's order came a month after nearly 1,800 family members, survivors, and first responders sent a letter (pdf) urging the president to steer clear of memorial events marking the 20th anniversary of 9/11 unless he declassified information that they claimed would reveal how Saudi government officials "materially supported" the hijackers.