"Y: The Last Man" presents a fascinating dystopia that probes the artifacts of our gendered world 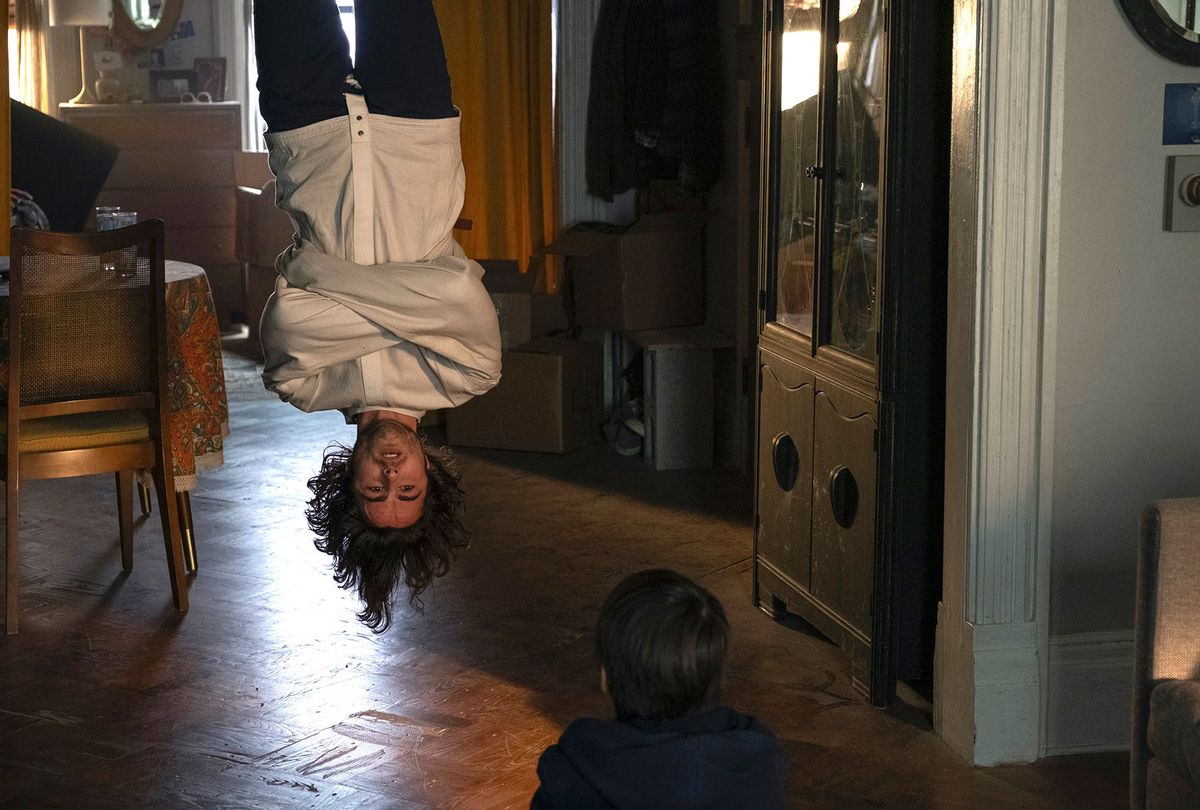 Unless you're familiar with the way Brian Vaughn and Pia Guerra designed Yorick Brown, the titular protagonist of "Y: The Last Man," this guy will probably work your nerves.

Ben Schnetzer, the actor who plays Yorick in the TV adaptation of the graphic novels, isn't to blame for that impression. In fact, he deserves credit for making Yorick about as tolerable as a late-20s professional magician could possibly be.

Yorick is a self-employed tutor who can't pay his rent without parental help, and who refuses to teach his clients basic card tricks because he thinks they're beneath him. When an apocalyptic event wipes out every living creature on the planet with a Y chromosome, he's the only cisgender human male left alive. He's also the living, breathing definition of entitled mediocrity.

Thankfully the TV adaptation of the comics isn't entirely constructed around Yorick, although his survival is central to answering one key question at the heart of this story. Instead, showrunner Eliza Clark and the writers forgo flashiness to wisely and meticulously construct the narrative around the women and trans men left alive to put this broken world back together.

There is a giant explosion in its opening hour but it is intentional, planned and coldly executed by the chameleonic Agent 355 (Ashley Romans), who may be series' most capable person next to Diane Lane's President Jennifer Brown.

It's Yorick who's the odd being out during all of this, which 355 calls out in a stunning outburst skewering his gender privilege.

"From the goddamn day you were born, the whole world has told you you're the most important thing in it. You know, you f**k around all you want with no consequences! An entire life of just being given s**t like, I don't know, the benefit of the f*****g doubt!" she fumes. "You just walk into any room and you take it for granted."

Now that Yorick is the most important person in the room, he could not care less about anything besides getting back to his girlfriend. If we care about Yorick at all it's because Schnetzer doesn't hide his internalized shame at his helplessness, which he displays by acting out and disregarding 355.

And if we care about 355, which Romans' passionate, furious performance ensures, it is because many of us have been forced to put up with and placate some version of Yorick and watched that guy fail upward.

Her and Yorick's fates entwine early on: Agent 355 is assigned to infiltrate the Secret Service under an assumed identity for reasons that aren't made clear. This means she's in the room where and when it happens, along with then-congresswoman Brown, Yorick's mother. The agent steps up to assist the newly anointed President Brown in the aftermath, correctly assuming the leader will require someone to do a bit of dirty work.

At first 355 is assigned to track down President Brown's estranged daughter Hero (Olivia Thirlby), but she stumbles across Yorick and his pet capuchin monkey Ampersand instead — another male survivor. Their discovery should provide a light of hope for humanity but, acknowledging the realpolitik of the situation, the president and the agent aptly realize Yorick's presence creates a host of other problems.

Through this and other subplots the series invites the audience to ruminate on which commonly held ideas about conflict, tribalism, and survival itself are implicitly gendered. This doesn't merely refer to the fallacy often posited by feminists that a world dominated and run by women would indeed be a more peaceful place. There's a common assumption — or there used to be, it is less prevalent in our partisan age — that women are inherently more likely to bridge their ideological divisions and work together for the common good.

In a reality that never experienced the Judeo-Christian strain of patriarchy, that may be the case. "Y: The Last Man" doesn't picture that world. It is a speculative fiction product co-created by a man (Guerra was the lead artist) operating from the perspective of what would happen if an androcidal cataclysm suddenly removes nearly all mammals born with Y-chromosomes not merely from the planet but from a patriarchal society.

This would not instantly eliminate its oppressive structuring.

Quite the opposite – it would bring the ramifications of longstanding inequities into relief. Within what's left of the government structure ideological factions emerge almost instantaneously; the former and now very dead president was a McCain-like conservative figure whose daughter Kimberly Campbell Cunningham (Amber Tamblyn) dedicates herself to preserving his legacy and securing a future for conservative women.

Beyond the halls of power, others who were once closer to the action like the former president's advisor Nora Brady (Marin Ireland) are left to fend for themselves. Through them we see firsthand how thin the mask of polite society is and how quickly it falls away when resources become scarce, starting with a consequential betrayal.

Confrontations with other armed and hungry groups come soon afterward, part of the usual chronology of decline and fall. Besides this, and other typical signposts of the world ending like planes dropping from the sky and cars crashing, watching the tangible effects of systemic gender inequality kick in provides the meat and mead of this drama's fascination.

For a preview of what that implies, look at recently recorded statistics about women in government and women working in the arenas of science, technology, engineering and math – which is to say, the people who run things, and the people who know how to keep things running.

If such a disaster befell us today or tomorrow approximately three quarters of Congress would be wiped out. Thanks to Kamala Harris' historical election to the vice presidency, the line of succession would not be as thoroughly obliterated as it is in "Y: The Last Man."

We all know Harris would be confronted with her own backlash in such an event, but having the office fall to Lane's congressional representative presents a different struggle. President Brown is quickly able to organize a team around her, but she's also a Democrat inheriting the office from a Republican administration.  Actors who play presidents on TV have a tendency to draw their own constituencies, and the way Lane balances confidence and warmth in her performance ensures she'll continue that tradition.

Helpfully Tamblyn's Kimberly, while not entirely unsympathetic, is marvelously two-faced; she's the adversary who claims to only want to be useful while angling for a clean target on our hero's back. There's a whiff of camp to this equation, but if you miss Meghan McCain on "The View" Tamblyn steps into that gap quite nicely.

For those keeping count, the consistent lack of women in the STEM fields is more concerning than our political vacuum. In our reality women comprise only 13% of working engineers and about 26% of computer scientists, according to a 2019 report from the Society of Women Engineers. Imagine what would happen if most of that workforce blinked out of the equation.

Vaughn and Guerra did, but Clark (who took over for previous showrunner Michael Green) realizes that scenario in a way that centralizes its women as competent, strategic and complex. Other elements of the original story crying out for an update involve its binary view of gender.

The drama's writers rectify this somewhat with Sam, Elliot Fletcher's transgender character who joins Hero on her escape from a sinking Manhattan. Through his character the writers provide a window into the discrimination trans people face right now and in such a disaster where cisgender women are dominant, while Allison Mann (Diana Bang) a geneticist tasked with solving the puzzle of Yorick and Ampersand, breaks down common misperceptions of gender succinctly.

"Not everyone with a Y chromosome is a man," she says before speaking the core truth of that tragedy, one that speaks to the obstacle getting in the way of understanding each other even now. "We lost so many people that day."

As post-apocalyptic series go, "Y: The Last Man" builds in a relatively staid fashion. A less kindly evaluation would describe its progression as slow, even plodding at points. Compared to the nervous dread that defines the first hours of, say, "The Walking Dead" or "Battlestar Galactica," the lead-in to the end of everything is much calmer.

However, this dystopian drama isn't about the spectacle of chaos but how that chaos brings out the best and worst of those enduring it. You can say the same of any show about the end of the world, but here the reliance on character feels much more essential.

No series works if the viewer doesn't find some portion of accuracy and honesty to connect with in its characters. Rather than drawing our focus to overwhelmingly visible, tangible signs of society's dissolution like flaming buildings and gore, "Y: The Last Man" invests all of its power in getting us to care about the people navigating the devastation.

There are no zombies chasing down survivors, only other humans angling for power. That makes it a dystopian tale one piece of genetic material away from being real, which is both fascinating and frightening and perhaps worth experiencing as a simmer instead of a full burn.

"Y: The Last Man" is currently streaming on FX on Hulu.