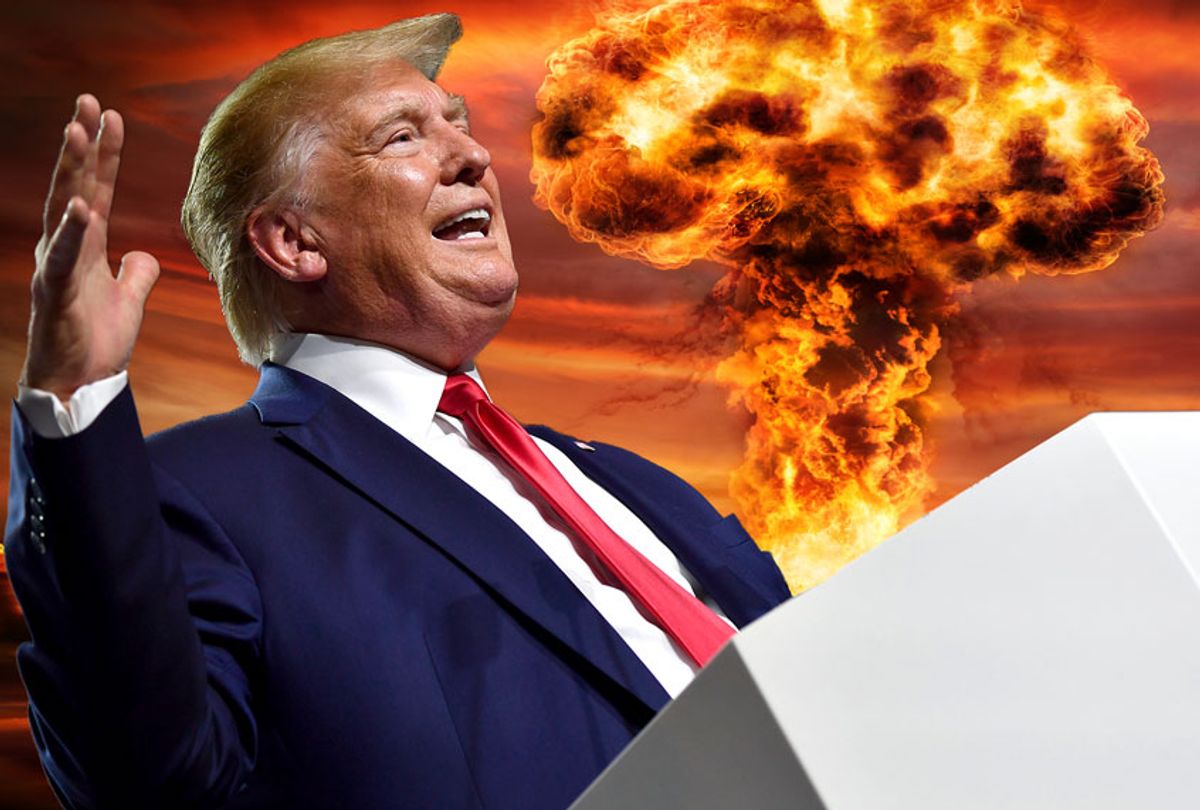 Just days after the fatal Capitol insurrection on January 6, Trump's top military adviser secretly maneuvered to stop Donald Trump from "going rogue" and launching an all-out nuclear war with China, according to bombshell revelations from a forthcoming book excerpted by CNN and The Washington Post.

The book, titled "Peril," was written by Washington Post reporters Bob Woodward and Robert Costa, and provides a never-before-seen glimpse into Trump's presidency, which apparently culminated in fears that Trump might initiate a last-minute military attack.

During Trump's final days in office, the book describes, Gen. Mark Milley, Chairman of the Joint Chiefs of Staff, grew increasingly "certain that Trump had gone into a serious mental decline in the aftermath of the election." The president was reportedly "all but manic, screaming at officials and constructing his own alternate reality about endless election conspiracies."

At one point, Milley thought the president might "go rogue" and engage in drastic military action, telling his staff: "You never know what a president's trigger point is."

According to The Post, Milley also made "a pair of secret phone calls" – one before and after the 2020 election – to Li Zuocheng, the general of the People's Liberation Army (PLA) of China, promising the Chinese general that the U.S. would not attack Beijing.

"I want to assure you that the American government is stable and everything is going to be OK," Milley reportedly told Li back in October of last year. "We are not going to attack or conduct any kinetic operations against you." If an attack did come to pass, Milley allegedly said, then China would be forewarned.

In a similar exchange following the Capitol riot, Milley reportedly received a call from House Speaker Nancy Pelosi, D-Calif., in which she conveyed fears that Trump might actually use the nuclear launch codes.

"What I'm saying to you is that if they couldn't even stop him from an assault on the Capitol, who even knows what else he may do?" Pelosi asked him. "And is there anybody in charge at the White House who was doing anything but kissing his fat butt all over this?"

Shortly after the call, Milley told the directors of the CIA and NSA to be on guard for erratic actions by the Trump administration.

In one encounter just a day before the riot, Trump apparently berated Pence over his unwillingness to block then-President-elect Joe Biden's election certification – a maneuver that is legally impossible.

Referring to Pence's nonexistent ability to block the certification, Trump asked his vice president, "But wouldn't it be almost cool to have that power?"

"No, no, no! You don't understand, Mike. You can do this. I don't want to be your friend anymore if you don't do this."

The book, which interviewed 200 first hand participants and witnesses in Trump's administration, is set to be released September 21.