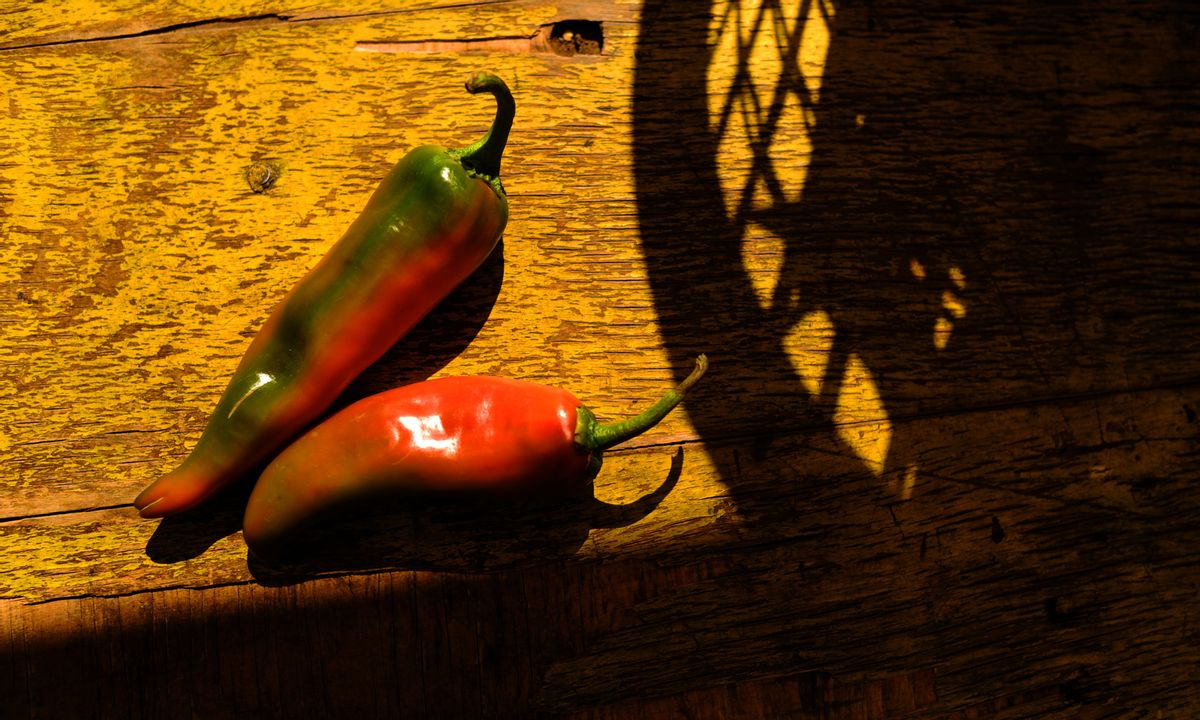 Baskets of hatch green chiles are ready to be roasted at a chile stand. (RJ Sangosti/The Denver Post via Getty Images)
--

The month of August brings with it a celebration of the season's best produce, like peaches, tomatoes, and corn. But in New Mexico, the real excitement is all about one regional hero: the mighty Hatch chile. Scientifically speaking, the Hatch chile is a cousin of the Anaheim, though its sweet, floral flavor and status as a cultural icon distinguishes it from any other pepper. "Idaho has its potatoes, Georgia has its peaches, and New Mexico has its chile," says Nate Cotanch, founder of Zia Hatch Chile Company.

When summer rolls around, New Mexico's obsession with the spicy crop becomes even more obvious. Supermarkets import massive crates of the stuff, and roasting drums pop up in parking lots and roadside trailers statewide. Lines that rival those at Disneyland form around the roasters, packed with locals eager to bring home pounds of peppers to char and freeze, stocking up for the year. Sitting down as a family to roast and pack chile into plastic bags is an experience that unites many New Mexicans, including Cotanch and Chef Eric See, who runs the New Mexico–inspired restaurant Ursula in Brooklyn. "It's part of your birthright," See says. "Seeing my mom at the kitchen table peeling chile for hours and stuffing it in the freezer is a full sensory memory."

Apart from the taste, the process of peeling and packing roasted peppers and the aroma that wafts seemingly throughout the entire state in August and September all contribute to the New Mexican chile's cultural significance.

The pepper owes much of its signature flavor to the state's climate, where the hot days and cold nights lead to a sweet, meaty product with a variable heat level. When picked before fully ripe, the green chile packs a bright, acidic punch. The fully ripened red chile trades some of the brightness for earthy sweetness. The growing conditions of chile are a double-edged sword; because it's impossible to re-create them anywhere else, true New Mexican chile has long been limited to the southwestern corner of the United States.

This lack of access is what inspired Cotanch to start Zia Hatch Chile Company in 2014. "It was pretty crazy that even in New York, of all places, where cuisines from every part of the world are represented, New Mexican food still really wasn't," he says. After years of living in New York and missing the chile he grew up eating, he started working with a family farm in southern New Mexico to bring its celebrated pepper to the East Coast. Now Zia's products are sold nationwide, and it's easier than ever for home cooks to get a taste of New Mexico in their own kitchens.

Freshly harvested chile is a luxury only afforded to people who visit New Mexico in late summer (or who can get their hands on some imported peppers), but the frozen variety is the next-best thing when you have a hankering for chile outside harvest season, or outside the state. This preparation is primarily reserved for the green chile, which has a brighter, more vegetal flavor than its red counterpart. Thanks to retailers like New Mexican Connection and The Hatch Chile Store, frozen chile is no longer limited to the dedicated chest freezers found across New Mexican households.

The most common preparation of frozen roasted chile is also the most simple: chopped and put on everything. Smearing it on quesadillas or adding it to a cheeseburger highlights the chile's meaty texture and subtle sweetness.

Drying chile for year-round use has been a part of New Mexican life for centuries. Originally, peppers were strung and hung together on patios and porches to facilitate the dehydration process and prevent pests. Now that technology has allowed for large-scale controlled chile drying, finding it outside of New Mexico is easier than ever.

Buying chile packed in jars is the most shelf-stable and widely accessible way to incorporate the pepper into your home cooking. Just like frozen chile, jarred varieties capture the ingredient's flavor at the peak of harvest season. One major difference, however, is that the jarred version handles peeling and chopping the chile for you.

You can use the chopped chile as a condiment just like its frozen counterpart, but part of its charm is in its versatility. At Ursula, See combines chile with a classic aioli and folds chopped peppers and cheddar into scones.

While nothing can re-create the sights, sounds, and smells of chile harvest season, home cooks no longer require a trip to the Southwest to have a taste of New Mexico's most iconic ingredient.