So what's the actual difference between jam and jelly?

And preserves, marmalade and so forth . . . 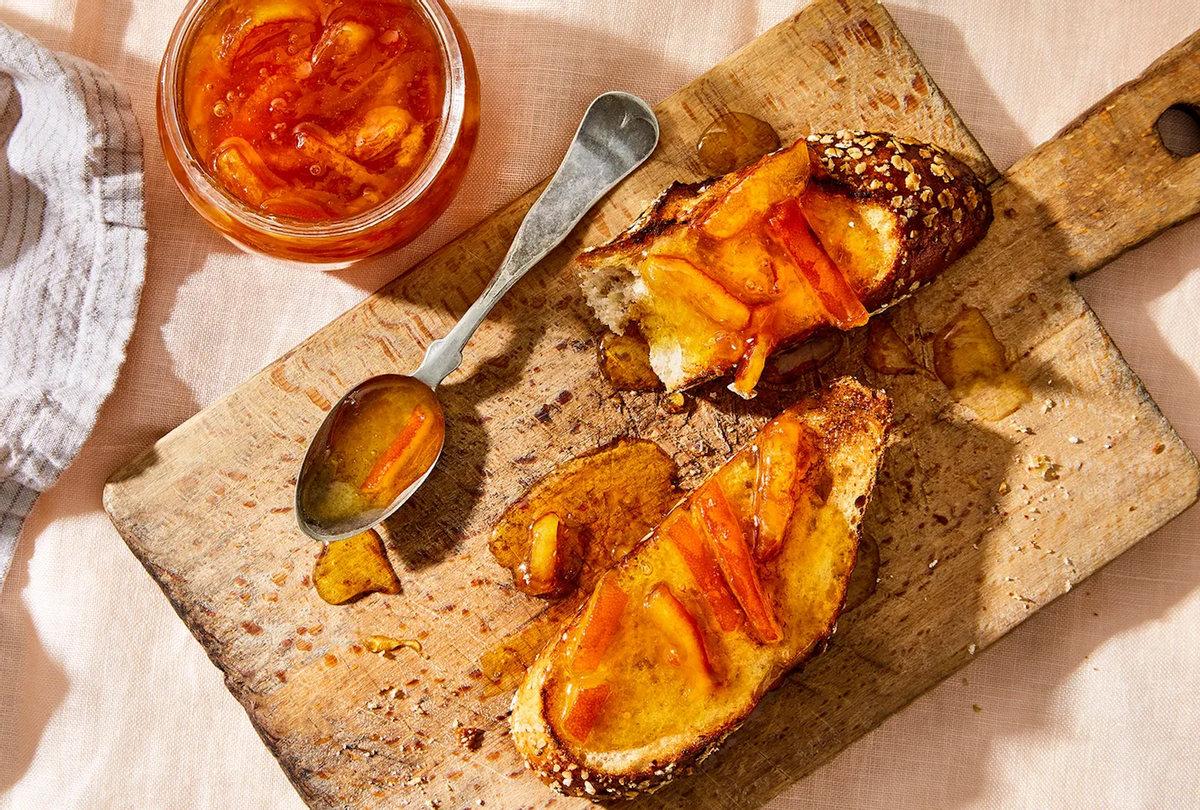 Besides being a playful abbreviation of the word "jealous" (just me?), jelly is not the same as jam, which is not the same as preserves, though they're all in the same family. Marmalade is also in that family, and so is compote, but in a cousin-twice-removed kind of way. We've broken it all down for you below, the way fruit breaks down to make delicious, delicious jam.

First things first: All of the above are forms of fruit cooked with sugar, an acid like lemon juice or vinegar, and occasionally pectin. Pectin occurs naturally in fruits, but low-pectin fruits like strawberries and apricots often need a bit of a boost in order to set into the jam-like texture we all love. That's when powdered stuff comes in handy. Once cooked this way and safely canned, preserves can live on shelves for months, waiting to add the taste of a July plum to a January piece of toast.

Jelly is the smoothest, jiggliest of the bunch, because it's made from fruit juice. To make jelly, you have to cook crushed fruit and strain it thoroughly with cheesecloth or an appropriately named jelly bag. As for what to do with the excess fruit pulp, this thread on our Hotline has some great suggestions, from infusing liquor to adding it to homemade oat bars.

Jelly is great for fruits like blackberries, which have particularly irritating seeds that love to get stuck in your teeth. It's also a great way to preserve mint, which pairs beautifully with lamb. It's the easiest of the lot to spread over baked goods for its consistent texture, and 'peanut butter and jam sandwich' doesn't quite have the same ring to it.

Here are some recipes that make the best of jelly's smooth consistency:

In terms of consistency, jam sits between jelly and preserves. It's less fussy to make than jelly because you can skip the straining and just cook finely chopped, crushed or pureed fruit with the sugar-acid-pectin (if needed) combination until it's ready to be canned. In summary: If it has tiny pieces of the fruit, skin, or seeds in it, it's jam. That's why you'll sometimes see non-fruit spreads referred to as jam (see: bacon jam, lettuce jam) — in the spirit of jam, they have small pieces of the ingredients throughout it.

Here are some fruit (and one vegetable) jam recipes that show how versatile it can be:

Preserves are jams that have slightly larger pieces of cooked fruit in it, if not whole pieces of fruit (like blueberries). For example, in the following Pear and Black Pepper Preserves recipe, the pears are cut into 1/4-inch thick slices.

Marmalade is a preserve made with citrus fruit, rinds and all. It tends to be much tangier and more sour than jam, and thanks to the copious amounts of natural pectin in citrus rinds, it has a pleasantly gelatinous texture. It can be used in any way you use jam, and does an excellent job of cutting through rich foods for added zip; think of a less fussy duck a l'orange or this savory PB&J that uses marmalade as its "J".

We have a few actual marmalade recipes too:

Like the examples above, making compote involves slowly cooking pieces of fruit with sugar and acid, but unlike them, it's not meant to be set or preserved. (And remember, pieces of fruit, not a purée — that would be a coulis.) It will keep in the fridge for a couple of days. It's a great option for topping pancakes, ice cream, or just eating on its own with a dollop of whipped cream. Here are more compote ideas and ways to use them:

Tartines with Ricotta and a Quick Apricot Compote

And no matter what, whichever of the above you decide to make, just know it'll be delicious on buttered toast.