James Webb Space Telescope: An astronomer explains how to send a giant telescope to space and why 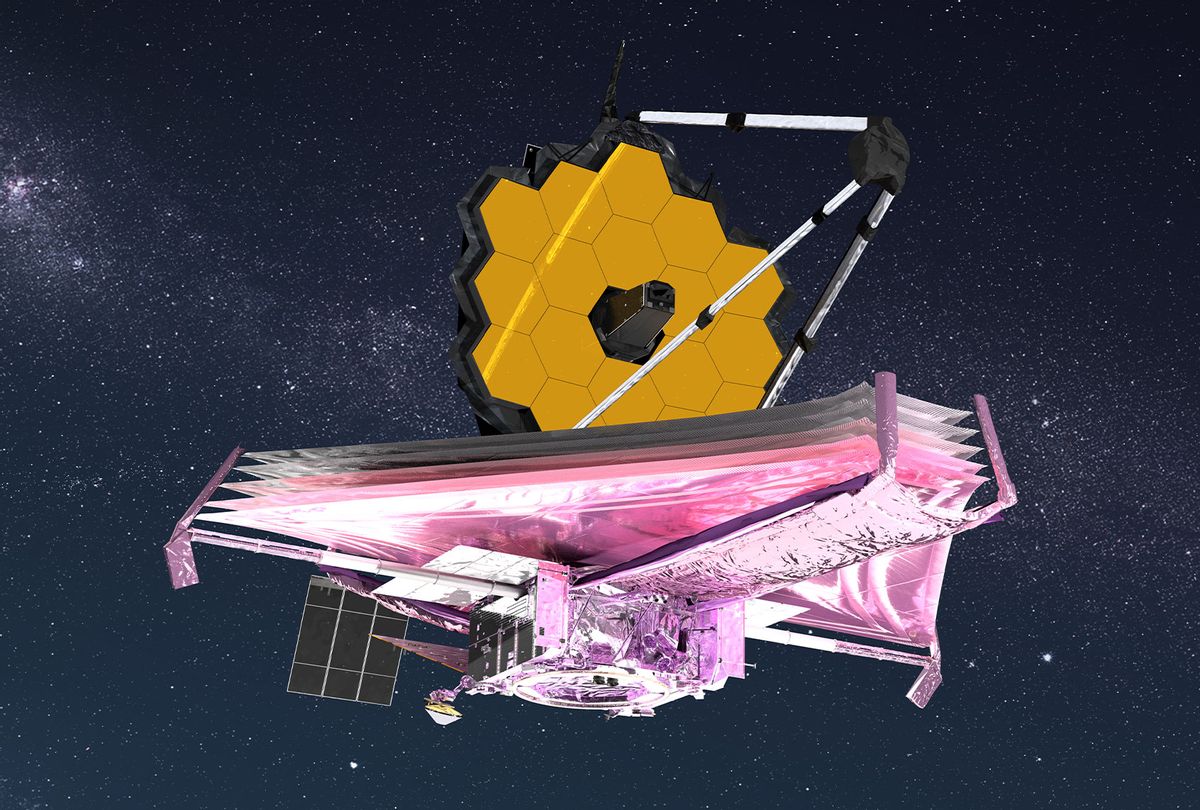 The James Webb Space Telescope is scheduled to head to space on Dec. 18, 2021. With it, astronomers hope to find the first galaxies to form in the universe, will search for Earthlike atmospheres around other planets and accomplish many other scientific goals.

I am an astronomer and the principal investigator for the Near Infrared Camera — or NIRCam for short — aboard the Webb telescope. I have participated in the development and testing for both my camera and the telescope as a whole.

To see deep into the universe, the telescope has a very large mirror and must be kept extremely cold. But getting a fragile piece of equipment like this to space is no simple task. There have been many challenges my colleagues and I have had to overcome to design, test and soon launch and align the most powerful space telescope ever built. 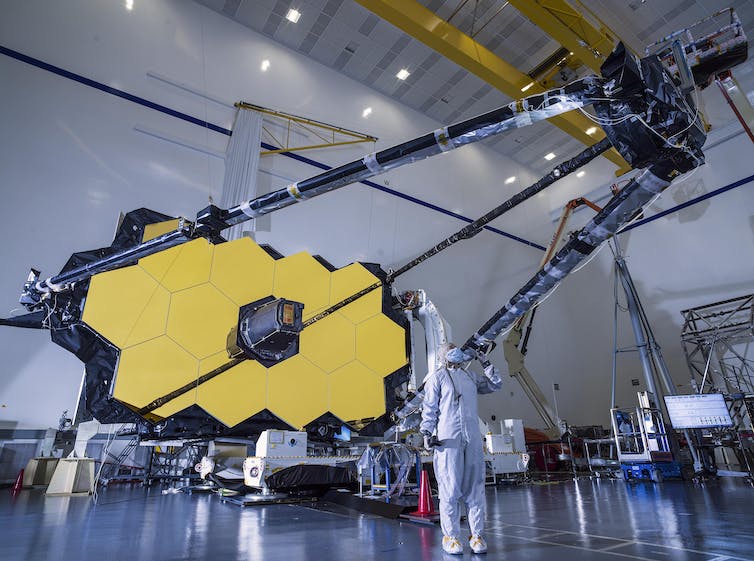 In order to detect the most distant and oldest galaxies, the telescope needs to be huge and kept extremely cold. NASA/Chris Gunn, CC BY

The Webb telescope has a mirror over 20 feet across, a tennis-court sized sun shade to block solar radiation and four separate camera and sensor systems to collect the data.

It works kind of like a satellite dish. Light from a star or galaxy will enter the mouth of the telescope and bounce off the primary mirror toward the four sensors: NIRCam, which takes images in the near infrared; the Near Infrared Spectrograph, which can split the light from a selection of sources into their constituent colors and measures the strength of each; the Mid-Infrared Instrument, which takes images and measures wavelengths in the middle infrared; and the Near Infrared Imaging Slitless Spectrograph, which splits and measures the light of anything scientists point the satellite at.

This design will allow scientists to study how stars form in the Milky Way and the atmospheres of planets outside the Solar System. It may even be possible to figure out the composition of these atmospheres. 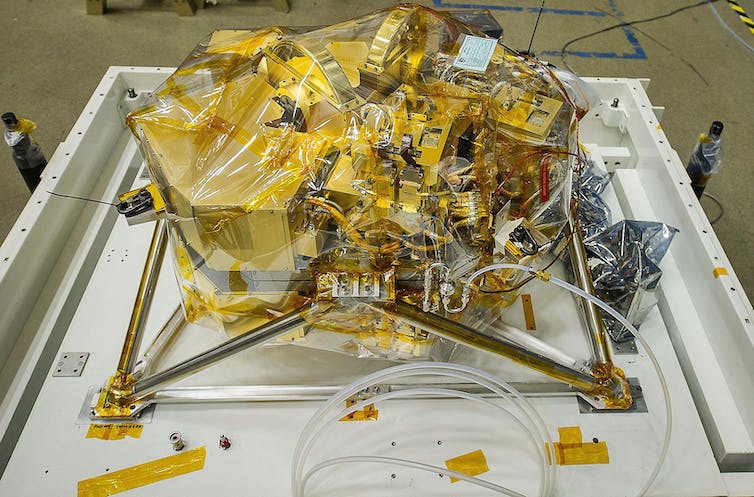 Ever since Edwin Hubble proved that distant galaxies are just like the Milky Way, astronomers have asked: How old are the oldest galaxies? How did they first form? And how have they changed over time? The Webb telescope was originally dubbed the "First Light Machine" because it is designed to answer these very questions.

One of the main goals of the telescope is to study distant galaxies close to the edge of observable universe. It takes billions of years for the light from these galaxies to cross the universe and reach Earth. I estimate that images my colleagues and I will collect with NIRCam could show protogalaxies that formed a mere 300 million years after the Big Bang —when they were just 2% of their current age.

Finding the first aggregations of stars that formed after the Big Bang is a daunting task for a simple reason: These protogalaxies are very far away and so appear to be very faint.

Webb's mirror is made of 18 separate segments and can collect more than six times as much light as the Hubble Space Telescope mirror. Distant objects also appear to be very small, so the telescope must be able to focus the light as tightly as possible.

The telescope also has to cope with another complication: Since the universe is expanding, the galaxies that scientists will study with the Webb telescope are moving away from Earth, and the Doppler effect comes into play. Just like the pitch of an ambulance's siren shifts down and becomes deeper when it passes and starts moving away from you, the wavelength of light from distant galaxies shifts down from visible light to infrared light. 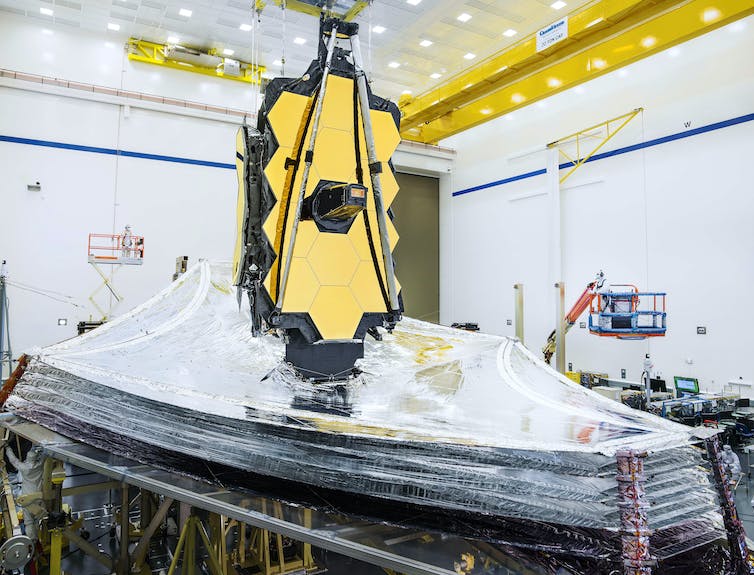 The five layers of silvery material underneath the gold mirror are a sunshield that will reflect light and heat to keep the sensors incredibly cold. NASA/Chris Gunn, CC BY

Webb detects infrared light — it is essentially a giant heat telescope. To "see" faint galaxies in infrared light, the telescope needs to be exceptionally cold or else all it would see would be its own infrared radiation. This is where the heat shield comes in. The shield is made of a thin plastic coated with aluminum. It is five layers thick and measures 46.5 feet (17.2 meters) by 69.5 feet (21.2 meters) and will keep the mirror and sensors at minus 390 degrees Fahrenheit (minus 234 Celsius).

The Webb telescope is an incredible feat of engineering, but how does one get such a thing safely to space and guarantee that it will work? 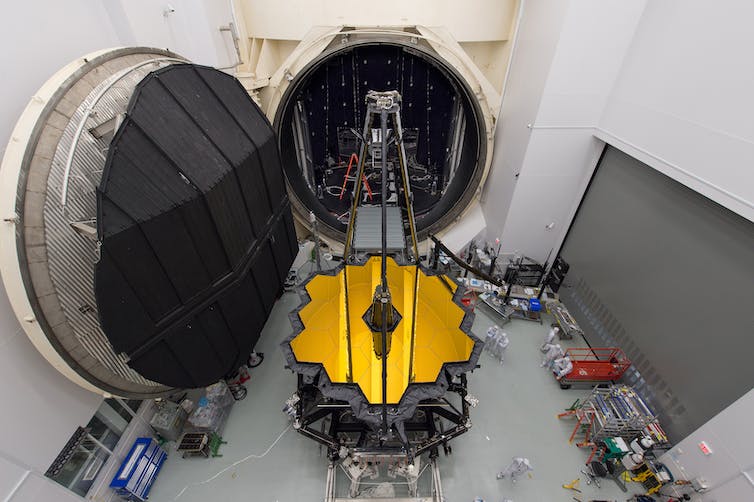 Engineers and scientists tested the entire telescope in an an extremely cold, low-pressure cryogenic vacuum chamber. NASA/Chris Gunn, CC BY

The James Webb Space Telescope will orbit a million miles from Earth — about 4,500 times more distant than the International Space Station and much too far to be serviced by astronauts.

Over the past 12 years, the team has tested the telescope and instruments, shaken them to simulate the rocket launch and tested them again. Everything has been cooled and tested under the extreme operating conditions of orbit. I will never forget when my team was in Houston testing the NIRCam using a chamber designed for the Apollo lunar rover. It was the first time that my camera detected light that had bounced off the telescope's mirror, and we couldn't have been happier — even though Hurricane Harvey was fighting us outside. 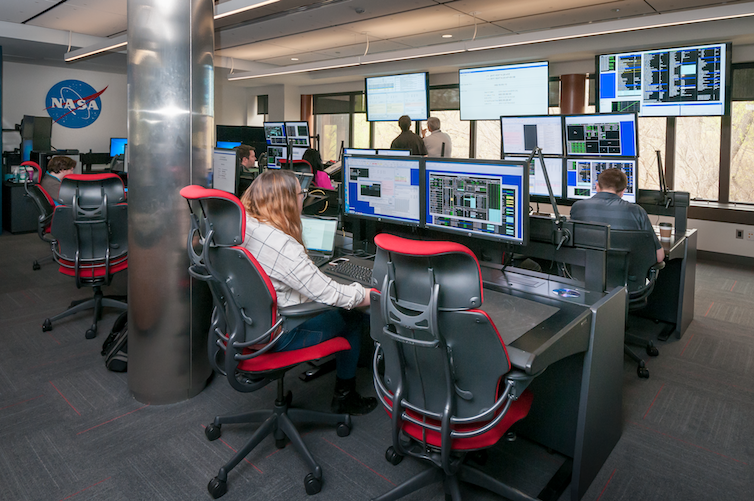 Rehearsals and training at the Space Telescope Science Institute are critical to make sure that the assembly process goes smoothly and any unexpected anomalies can be dealt with. NASA/STScI, CC BY

After testing came the rehearsals. The telescope will be controlled remotely by commands sent over a radio link. But because the telescope will be so far away — it takes six seconds for a signal to go one way — there is no real-time control. So for the past three years, my team and I have been going to the Space Telescope Science Institute in Baltimore and running rehearsal missions on a simulator covering everything from launch to routine science operations. The team even has practiced dealing with potential problems that the test organizers throw at us and cutely call "anomalies." 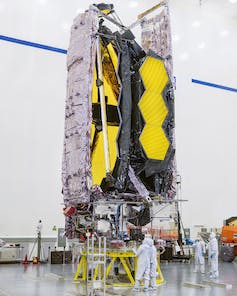 To fit inside a rocket, the telescope needs to fold into a compact package. NASA/Chris Gunn, CC BY

The Webb team will continue to rehearse and practice until the launch date in December, but our work is far from done after Webb is folded and loaded into the rocket.

We need to wait 35 days after launch for the parts to cool before beginning alignment. After the mirror unfolds, NIRCam will snap sequences of high-resolution images of the individual mirror segments. The telescope team will analyze the images and tell motors to adjust the segments in steps measured in billionths of a meter. Once the motors move the mirrors into position, we will confirm that telescope alignment is perfect. This task is so mission critical that there are two identical copies of NIRCam on board — if one fails, the other can take over the alignment job.

This alignment and checkout process should take six months. When finished, Webb will begin collecting data. After 20 years of work, astronomers will at last have a telescope able to peer into the farthest, most distant reaches of the universe.