Kristi Noem's new theocracy: No masks in schools, but she is trying to make kids pray

South Dakota faces a raging pandemic, but its governor is focused on whether the government is "biblical" enough 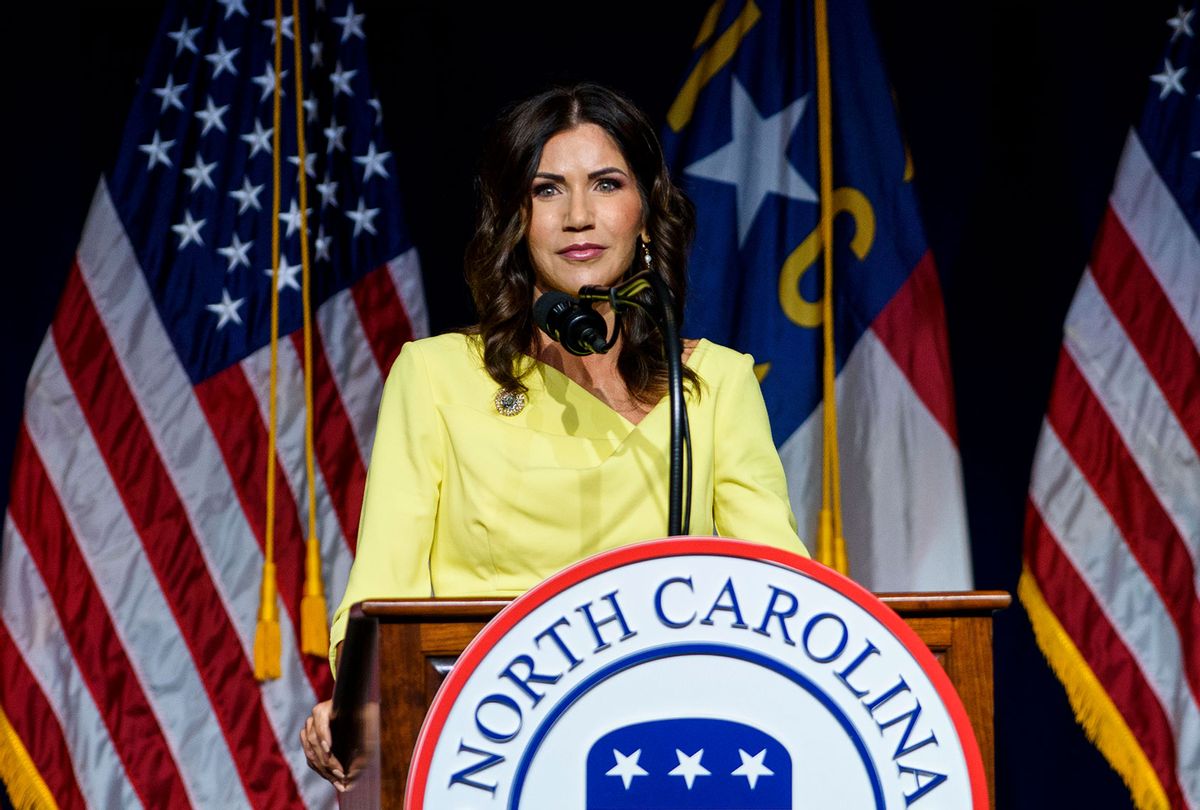 South Dakota Gov. Kristi Noem speaks to attendees at the North Carolina GOP convention on June 5, 2021 in Greenville, North Carolina. Former U.S. President Donald Trump is scheduled to speak at the NCGOP state convention in one of his first high-profile public appearances since leaving the White House in January. (Melissa Sue Gerrits/Getty Images)
--

South Dakota's Republican Governor Kristi Noem refuses to mandate masks for schoolchildren and teachers but she's trying to make students pray in public. Gov. Noem, who is widely expected to run for president in 2024, has let the coronavirus run rampant in her state of just 886,667 people – a population so small New York City's is ten times larger. And yet coronavirus is running rampant in South Dakota, which ranks number eight in the nation for coronavirus cases per capita.

Governor Noem just made clear she does not see herself as a government or political leader, but as a religious one. Speaking to Real America's Voice personality David Brody, Noem declared she will bring back prayer in schools (even though voluntary prayer has always been legal) and thinks political leaders are supposed to "minister" to their constituents.

Complaining that the actions other government leaders are taking "are not biblical," Noem says they are supposed to "line up with God," which is false.

"I think that it's really time for all of us to look at the actions of our leaders and see if they line up with the word of God," Noem said, "see if they're biblical and if they really are following through on those actions that God's called us to do to protect people, to serve people, and to really minister to them."

Protecting, serving, and ministering – but not in the fight against the deadly pandemic.

"We've seen our society, our culture, degrade, as we've removed God out of our lives, and people become what they spend their time doing," Noem declared. "When I was growing up, we spent every Sunday morning, every night, every Wednesday night in church, we were our church, family was a part of our life, we read the Bible every day as a family together, and spent time with each other, recognizing that we were created to serve others."

Again, Noem makes clear she does not believe serving and protecting others has anything to do with COVID-19.

"I don't know families do that as much anymore and those biblical values are learned, in the family, And they're learned in church when the doors are open so people can be there and be taught."

"We in South Dakota, have decided to take action to really stand for biblical principles. We had a bill that was passed during legislative session two years ago that put the the motto 'In God We Trust' in every single school building it is displayed. Now in every K-12 school building in the state of South Dakota.

"I have legislation that we'll be proposing this year that will allow us to pray in schools, again, I really believe that focusing on those foundational biblical principles that teach us that every life has value every person has a purpose will recenter our kids and help us really heal this division that we see taking over our country."

MSNBC's Steve Benen notes, "given that the United States is a democracy, and not a theocracy, officials' actions are supposed to line up with the Constitution and the rule of law, not how some people interpret scripture."

"What the governor seemed to be suggesting, however, isn't a system in which students pray on their own," he adds, "but one in which school officials intervene in children's religious lives. In the United States, that's not legal: As my friends at Americans United for Separation of Church and State recently explained, 'The South Dakota Supreme Court struck down mandatory recitation of the Lord's Prayer in the state's public schools in 1929. The U.S. Supreme Court invalidated school-sponsored prayer and Bible reading in public schools in 1962 and '63.'"