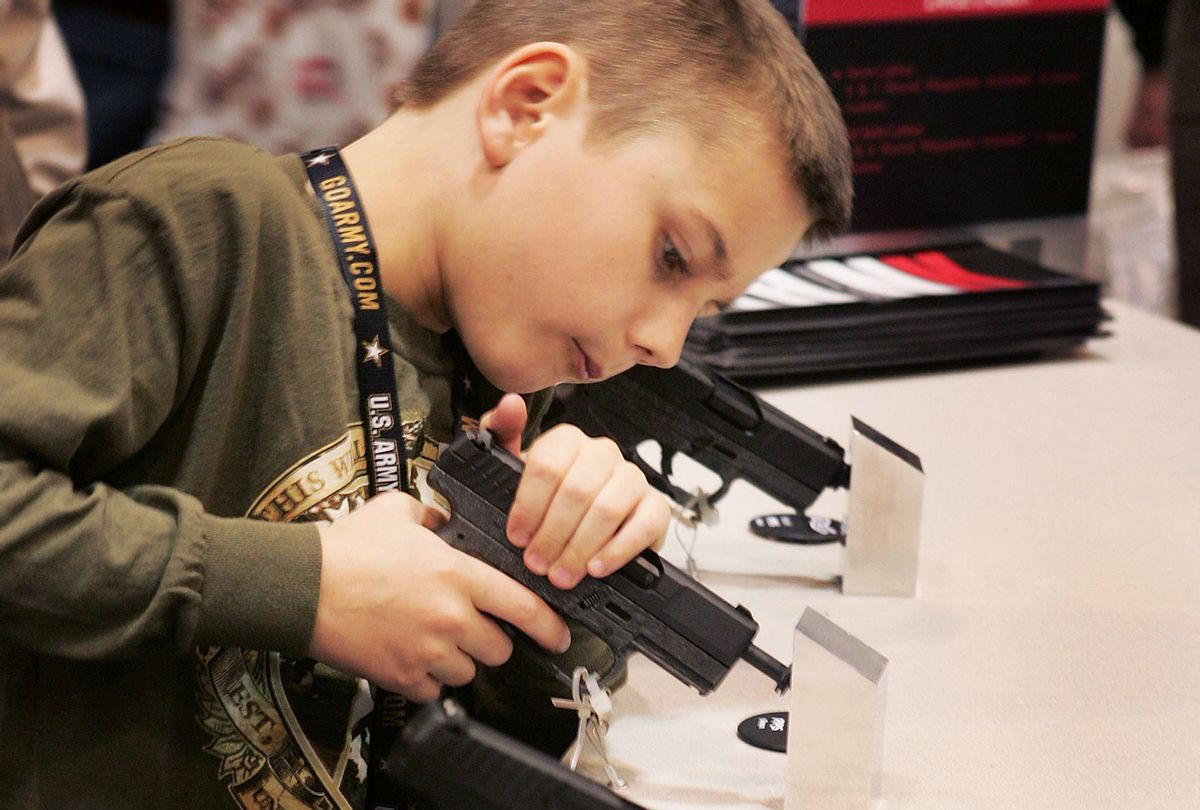 When Nikolas Cruz, a then-19-year-old from Parkland, Florida, stormed the Marjory Stoneman Douglas High School in 2018 with a semi-automatic rifle, gunning down fourteen students and three staff in roughly six minutes, those unfamiliar with Cruz's personal history felt like the tragedy came out of nowhere. Cruz, like so many mass shooters, had exhibited all of the signs of someone to watch out for long before. Prosecutors found that Cruz had a well-documented affinity for guns and violence. He started playing violent video games as a middle school student, and sought to be a U.S. Army ranger, allegedly telling a family friend that he "wanted to join the military to kill people." Cruz was described by friends and family as being a highly impulsive teen prone to emotional outbursts often ending in violence. He was also known as an avid user of social media – particularly Instagram – which for years provided a him platform to boast about his gun collection as well as his proclivity for animal cruelty.

In February of 2017, just three days after withdrawing from Stoneman Douglas High, Cruz purchased a Smith & Wesson M&P 15 – an AR-15 style semi-automatic assault rifle that bears similarities the the military's M-16. Somehow, he'd passed a background check that included a mental health component, despite being referenced in at least 45 calls to law enforcement spanning back to 2008. A year later, shortly after the FBI was anonymously warned about his potential to carry out an act of mass violence, Cruz brought his rifle to Stoneman Douglas High and executed the deadliest high school shooting in U.S. history.

Gun reform advocates have worked to understand why an adolescent like Cruz – who had a long history of behavioral issues – was able to legally obtain such a lethal weapon. Companies like Smith & Wesson market their firearms to young men – a demographic that represents a disproportionate amount of mass shooters. So Everytown for Gun Safety and Brady – arguably the two foremost gun control groups in America – renewed their request for the Federal Trade Commission (FTC) to investigate the marketing practices of Smith & Wesson. Their plea, which stems from a complaint jointly filed to the FTC last year, airs out a litany of ways in which the gun giant allegedly attempts to connect with younger audiences, often pushing the envelope of consumer protection law or at times even flouting it altogether.

"It doesn't take a marketing expert to understand what they're trying to appeal to," Kris Brown, President of Brady, said of Smith & Wesson's marketing practices in an interview with Salon. "They're trying to market the gun as a totem – a substitute for masculinity to teenagers."

One of the ways that Smith & Wesson imbues its firearms with a sense of machismo, Brown said, is by creating a sense that its products are in some way affiliated with the U.S. military and law enforcement. Indeed, the company has regularly used such imagery on its website and Instagram, sporting pictures of camo-clad military soldiers as well as police officers serving in the line of duty. Smith & Wesson even offers its own line of firearms called "M&P" specifically devoted to military and police use. (As it so happens, an M&P gun was also used in the Parkland shooting.)

But by and large, the company sells its products to regular consumers, who have no military or police affiliation. In fact, according to a Freedom of Information Act request issued by Everytown and Brady, Smith & Wesson has secured just one small contract with the military over the last decade – a 250-unit supply of revolvers sent to Thailand back in 2012.

Despite this, Smith & Wesson has repeatedly emphasized the need to impart a "halo effect" around its products by associating them with military and law enforcement. In fact, Smith & Wesson went so far as to cite the effect as one of its key "growth drivers," per an investor presentation from 2012, and continued to do so in subsequent presentations. Asked about the effect during a 2016 earnings call with investors, the company's CEO said: "It certainly gives your product a lot of credibility if it is used, adopted and well-regarded by that professional community because the consumer does pay attention to that."

Apart from its potential to mislead buyers, the company's halo effect is especially concerning because it's "attractive to a certain subset of young men who are fixated on law enforcement and military," Alla Lefkowitz, Director of Affirmative Litigation at Everytown and a signatory of the group's complaint, said in an interview.

The gun lobby's alleged effort to foist guns onto young men and adolescents is not a novel phenomenon. For decades, gun manufacturers have sought to sustainably capture the interest of younger buyers, using new methods of marketing and merchandising to give their products a more youthful appeal.

The Violence Policy Center (VPC) detailed this strategy in a comprehensive report from 2017. It notes, for example, how the gun lobby mass-produces light-weight "tactical" rifles designed for shooters with smaller frames, often colored-coded with respect to gender. VPC specifically found that Smith & Wesson at one point offered its M&P 15 – the same gun used by Cruz – in "Pink Platinum, Purple Platinum, and Harvest Moon Orange."

In the past, some gun producers, like Thompson/Center, have been staggeringly candid about their bid to appeal to younger consumers. For instance, in a review of Thompson/Center's child-friendly gun "Hotshot," the company's director of marketing quoted back in 2014: "We're targeting the six- to 12-year-old range and feel that with the inclusion of the one-inch spacer in the box, there will be a longer period that the child can use the rifle, potentially out to 15 years old."

"Each person who is introduced to the shooting sports and has a positive experience is another vote in favor of keeping our American heritage and freedom alive," wrote Andry Frink, editor of Junior Shooters, in a 2012 editorial. "They may not be old enough to vote now, but they will be in the future. And think about how many lives they will come in contact with that they can impact! Each of us affects others, and it is up to us how we make an impact on the future."

While federal law prohibits anyone under eighteen years old from owning a handgun, it's fair to say that the gun lobby has, for better or worse, deeply embedded itself into parts of American youth culture. According to a 2015 survey by the National Shooting Sports Foundation, about 72 percent of gun owners started hunting between the ages of six and fifteen. About 1 in every 18 high school students go to school armed with a gun, the American Academy of Pediatrics found in 2019.

The Washington Post observed that many states throughout the south and midwest have no age restriction on long guns (rifles and shotguns) to begin with. Given the wide swathe of literature that correlates gun ownership with household deaths and injuries, we should be especially concerned about more guns getting into the hands of kids and adolescents, Josh Sugarmann, Director of VPC, told Salon.

"We know from decades of research that bringing a gun into a home increases the risk of homicide, suicide and unintentional injury. That's just a fact," Sugarmann stated in an interview. "And the answer to that is 'let's introduce children to it as early as possible?' We don't apply that same standard to things like alcohol."

Over the past several decades, gun manufacturers have largely marketed toward younger audiences through traditional modes of print advertising, like magazines and catalogues. But more recently, they've drastically narrowed their focus on one channel in particular: social media.

This largely appears to be the case with Smith & Wesson, which now heavily relies on its Instagram page in particular to promote its products. While Smith & Wesson engages in many of the tactics discussed above – that is, posting pictures of teens shooting guns and drawing dubious associations between its products and the military – Smith & Wesson also apparently employs its own "influencers" and "sponsored shooters" to connect more intimately with younger audiences.

The phenomenon, Everytown's complaint alleges, is especially controversial because these personalities routinely fail to disclose their financial linkages to Smith & Wesson, despite promoting the company's products. The result, Brown told Salon, is that the company's influencers are able to pass off their paid promotions as authentic opinions – and in the process, avoid a relationship with youngsters feels "transactional."

Smith & Wesson's apparent brand ambassadors include shooting instructor Ava Flanell, trick shot artist David Nash, digital marketer Nikki Boxler, former chief of police Ken Scott, as well as professional competition shooters Jerry Miculek and Julie Golob – all of whom respectively have thousands of Instagram, Twitter, Facebook, or YouTube followers. These influencers often use subtle ways of disclosing their relationship to Smith & Wesson, like naming the company hidden hashtags or putting it in "More" or "About Me" sections. However, according to the FTC Endorsement Guidelines, such admissions are a far cry from the gold standard, which demands recurring disclosures throughout each new post with simple and clear language. Salon reached out to the aforementioned influencers, but none responded to requests for a comment. Smith & Wesson also failed to respond to Salon's inquiries. Asked whether Instagram had any responsibility to moderate poorly-disclosed endorsements of firearms, a Facebook spokesperson told Salon: "Branded content that promotes weapons are not allowed on Instagram and we remove posts that we find to be violating."

While the apparent lack of disclosure by the named influencers is legally questionable, it's also  concerning with regards to Instagram's user demographics, Brown said. According to Statista, nearly 30% of Instagram's users fall into the 18-24 age range. A 2017 AP-NORC survey found that 73% of American teens use Instagram, with 66% on Facebook.

"Adolescents are more susceptible to advertising and especially advertising that endorses or simulates risky behavior, right?" Lefkowitz said. "And that's why alcohol companies, cigarette companies, and car companies have to be careful about the way that they market it."

Sugarmann suggested that it's only a matter of time before the gun lobby is held to account for its adolescent marketing efforts.

"The industry has just sort of been operating under the radar for a very long time on this front," he said. "And it's…an area that deserves very close scrutiny."