"If [Mississippi] were its own country, [it'd have] the 2nd-worst per capita death rate in the world" 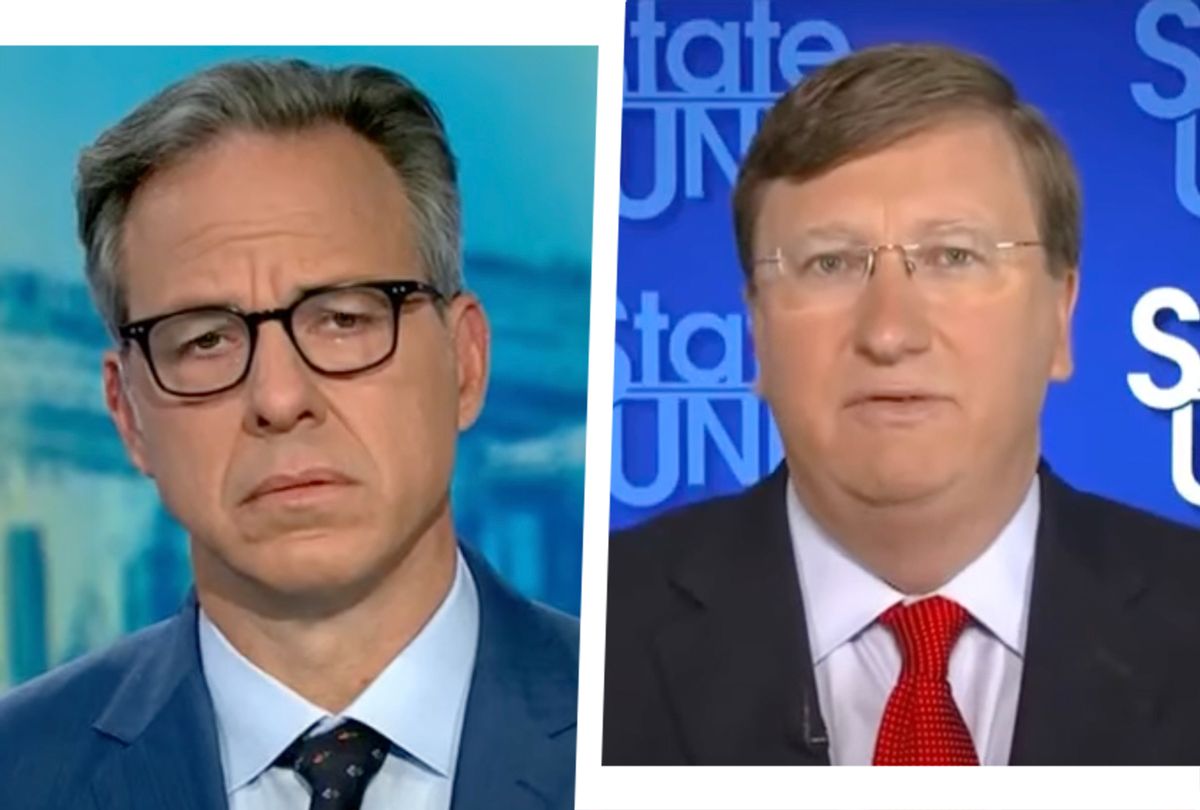 A combative Gov. Tate Reeves (R-MS) battled with "State of the Union " host Jake Tapper on Sunday morning after the CNN host pointed out the massive death toll in his state from Covid-19 and point-blank told him: "You're not doing anything."

During the interview that ranged over 14 minutes, host Tapper called the death toll in Mississippi "horrible" and informed the Republican lawmaker that, if his state was a country, it would be second in Covid deaths per capita worldwide.

That in turn, led Reeves to accuse the CNN host of not talking about Covid deaths in states overseen by Democratic governors -- with the two talking over each other as Tapper told Reeves he wanted to talk about Mississippi's staggering death toll.

"Governor, if Mississippi were a country, you would have the second-worst per capita death toll in the world, and I'm saying are you going to do anything to try to change that?" Tapper pressed.

"Jake, as I mentioned earlier, deaths, unfortunately, are a lagging indicator," Reeves shot back. "Our total number of cases went from 100 to 3,600 and over the last two weeks has declined. They've been cut in half from 3,600 to 1,800. When you wanted me to come on three or four weeks ago and talk about our number of cases then you want to talk about our hospitalizations, now you want to talk about a lagging indicator, which is sad, and it's horrible."

"I'm saying to you, your way's not working and whether you say it's a lagging indicator, or whatever your argument is. Mississippi now has, if it were its own country, the second-worst per capita death rate in the world, behind only Peru. and I'm saying, are you going to try to do anything to change that and I'm not hearing an answer," Tapper insisted.

"Well, what I have said to you repeatedly, Jake, is that Mississippi has taken action, Mississippi has seen a significant uptick in the total number of Mississippians that have gotten the vaccine." Reeves attempted. "We've seen our case numbers have fallen dramatically in the last two weeks. And so ultimately, as I have said, deaths, unfortunately, is a lagging indicator, we've seen cases, again, cut in half in Mississippi. And these other states that you refuse to talk about, perhaps because they have Democratic governors, you don't want to talk about them. But the reality is, you and the president and so many other people want to make this about politics."