The California Republican Party is broken. The Newsom recall proved it 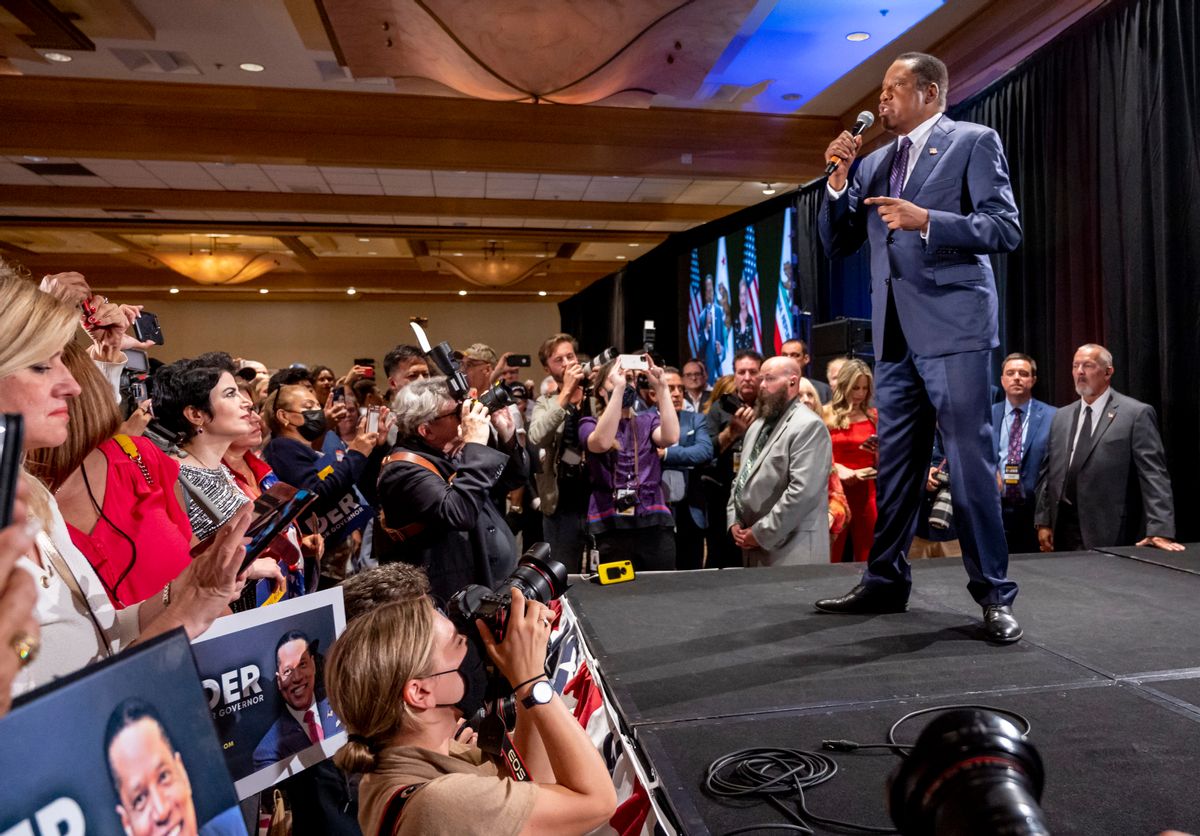 Larry Elder speaks to his supporters after conceding that the recall election was defeated during an election night event at the Hilton Orange County in Costa Mesa on Tuesday,September 14, 2021. (Leonard Ortiz/MediaNews Group/Orange County Register via Getty Images)
--

In the end, Larry Elder could not deny the inevitable judgment of California voters, and on Tuesday night he conceded with unexpected grace and near humility. His hopes of unseating Gov. Gavin Newsom in a recall election ended with a landslide defeat that left no room for excuses or conspiracies.

The talk radio agitator, along with the remnants of the California GOP, lost the recall fight by at least 2 million votes. "We may have lost the battle but we are going to win the war," Elder told supporters gathered for an election night party in Costa Mesa, but he had been prepared to take a much darker turn.

Just days earlier, former President Donald Trump claimed the California recall was "probably rigged," before a single vote was counted. A website paid for by the Elder campaign repeated the claim and provided a petition "demanding a special session of the California legislature to investigate and ameliorate the twisted results." On election eve, Elder refused to explicitly promise to accept the results, win or lose.

However unintentionally, the insinuations of voter fraud only served to underline how broken the GOP has become in California. The latest "rigged" conspiracy was in defiance of simple math in a state where verified Democratic registration is double that of Republicans. Joe Biden had just won the nation's most populous state in 2020 with 63.5% of the vote, easily crushing Trump by more than 5 million votes.

Newsom won by essentially the same margin as his landslide victory in 2018 against another weak Republican candidate, John Cox.

The shrinking Republican base in California has only grown more extreme as traditional conservatives and moderates exit a party that once dominated in California. While traditionally liberal states like Maryland and Massachusetts have managed to elect moderate Republicans as governor in recent years, California has become a lost cause.

"It was a strong Republican state when Republicans weren't this anti-immigrant, this anti-woman, this anti-science," says Melahat Rafiei, secretary of the California Democratic Party. "So it isn't that the people changed. The Republican Party went to a place where people couldn't go."

If more than 50% of voters had voted yes on the recall, Newsom would have been replaced by the leading challenger: Elder.

But the possibility that the country's most populous, most progressive state could be taken over by a far-right minority through a recall election turned out to be a mirage. Its success always depended on low turnout from apathetic Democrats. That was before voters got a good look at the leading Republican in the race to replace Newsom.

Elder is against gun control and policies to fight climate change, is anti-choice and has called for a minimum wage of zero. He is a regular guest on Fox News.

In a normal gubernatorial election, Elder would have no chance in California. After nearly 30 years as a talk radio flamethrower, Elder has name recognition but little support beyond those who already share his far-right, libertarian views. Until the recall, he had never run for office or put in the hard work of building a genuine political constituency.

The loudest voices against Newsom and his strict measures to fight the spread of the coronavirus turned out to represent an extreme minority view, as exit polls showed this week. The vast majority of voters supported the stay-at-home orders, the mask mandates in schools, the vaccine mandates for state workers.

While voters who were already battered from 18 months of COVID-19 were increasingly alarmed by the unexpected rise of the delta variant, Elder promised to eliminate all those protections "before I have my first cup of tea" as governor. It was a typically provocative statement from Elder that might light up the phone lines for his radio show, but it was no path to victory. Californians do not want to become Florida.

A high-volume mix of libertarian and shock jock will draw a crowd on AM talk radio every time, but "the Sage of South Central" was unprepared to expand on his core following. True to his character and broadcast history, Elder refused to adjust his policies to fit the California electorate in 2021. Hubris killed the radio star.

Elder's delusional hard-right campaign made no sense in California but was only a symptom of a larger problem for the GOP. Moderates have left the party, not necessarily to become Democrats but simply to escape a GOP now defined by Trump and echoed by Elder.

The GOP will never again prevail in the state it once dominated until it adopts policies and a persona that isn't politically repulsive to the mainstream. In 2021, that seems out of reach. One traditional Republican in the race was the moderate former San Diego Mayor Kevin Faulconer, who came in a distant 3rd, his less than 500,000 votes just a fraction of Elder's support.

Newsom's decisive victory has strengthened the governor for reelection in 2022 and positioned him as a potential presidential candidate later this decade. But many voters were genuinely enraged last year when he was photographed maskless for dinner at the exclusive French Laundry restaurant in Napa Valley, after creating restrictions on public gatherings in response to the pandemic. The revelation pushed the recall signature gathering effort over the finish line, ultimately costing $276 million in taxpayer dollars.

This week's vote was an expensive lesson at a moment of national crisis and a self-inflicted wound. Newsom will have to make up for that as the state continues to fight COVID-19, climate change, ongoing wildfires and an exploding homeless population.

There were serious politicians running too, but none stood a chance against the star power of Schwarzenegger. Earlier that summer, his Terminator 3: Rise of the Machines was a massive hit, earning $433.4 million in ticket sales worldwide. More importantly, Gov. Gray Davis had lost the enthusiasm of his constituents, with an anemic approval rating of 26%. He was an easy target for the actor-bodybuilder, who complained about "special interests" and the governor's unpopular "car tax."

Schwarzenegger's popularity meant he could easily cross party lines in a state that was then more evenly divided, while holding moderate positions on abortion rights, the environment and gun control. There was also a staggering state debt that the incoming "Governator" was ultimately unable to solve. It tripled during his two terms in office.

But none of that approached the dire life-and-death stakes of the pandemic that Newsom has faced during his first term. COVID-19 has killed almost 68,000 Californians so far, but a majority of voters have come to see Newsom's mask and vaccine mandates, and last year's shelter in place order, in a more positive light. With a new threat posed by the delta variant rising, about a third of voters said the pandemic was the race's most important issue, according to a CBS News exit poll.

This time, few voters were interested in hearing about the quirkier candidates running in a recall election. There was too much at stake in the MAGA era to take the amateurs seriously.

Caitlyn Jenner, who enjoyed outsized media attention early in the campaign, didn't even land in the top 10 with 1.1% of the vote. Her campaign as a "compassionate disrupter" was a garbling of previous Republican slogans and had few takers. Despite huge name recognition as a Karsdashian TV family member and her distant past as an Olympic decathlon champion, Jenner ended up only five places above onetime billboard pinup Angelyne in the final results.

Now that Elder has had a taste of life as a high-profile politician, he may not be willing to surrender that spotlight. He could be a candidate again in 2022, sidelining any moderate Republicans who might actually have a chance statewide against Newsom. As he promisedan interviewer on KMJ radio in Fresno on Election Day, "I'm not going to leave the stage."

"I know some Republicans who are really tied in knots — they do not want him to run," says Sherry Bebitch Jeffe, longtime observer of state politics and retired professor of the practice of public policy communication at USC. "What you've got to do in a regular general election is to reach out to moderate Democrats, to reach out to 'no party preference' voters. And even if he tries, it's going to be very difficult given his record on issues."

In a state where Democrats enjoy a supermajority in the Legislature, none of Elder's proposals ever had any chance of becoming law. He's good at picking fights and reading ad copy into a microphone, but he's added nothing to the conversation about the path forward in California. Owning the libs is not a means of governing.

The recall election only sounded the alarm for voters. Now that it's over, Democrat Rafiei is grateful for the recall as a "dress rehearsal" for 2022. "Now we're fired up even before we needed to," she says. "This was supposed to be an off year — but there are no more off years. Our activists are ready."