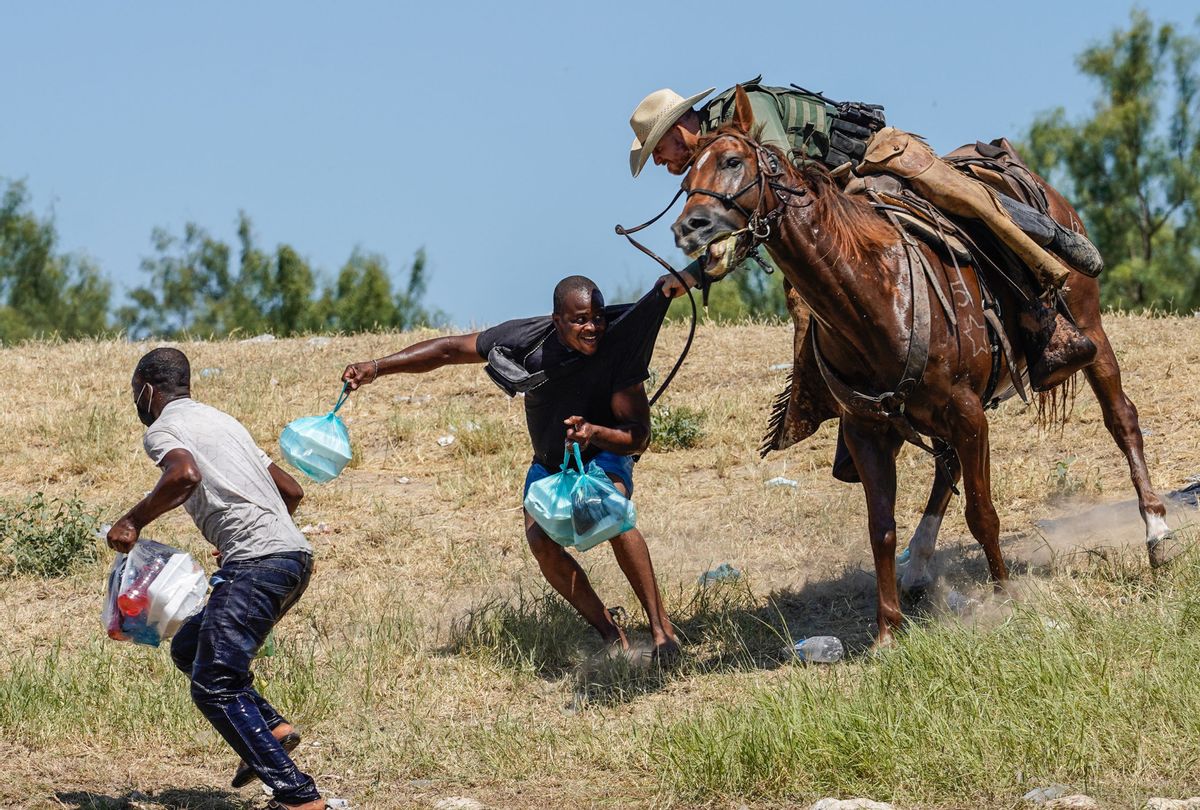 A United States Border Patrol agent on horseback tries to stop a Haitian migrant from entering an encampment on the banks of the Rio Grande near the Acuña Del Rio International Bridge in Del Rio, Texas on September 19, 2021 (Paul Ratje/AFP via Getty Images)
--

"I will not be associated with the United States inhumane, counterproductive decision to deport thousands of Haitian refugees and illegal immigrants to Haiti, a country where American officials are confined to secure compounds because of the danger posed by armed gangs to daily life," Special Envoy Daniel Foote penned in a missive to Secretary of State Antony Blinken.

"Our policy approach to Haiti remains deeply flawed," he added, "and my policy recommendations have been ignored and dismissed, when not edited to project a narrative different from my own."

His resignation, first reported by PBS, comes in the wake of recently surfaced images of border patrol agents aggressively corralling some of the 15,000 Haitian migrants making their way across the border last week. Addressing the viral pictures on Tuesday, President Joe Biden told reporters, "We'll get it under control," according to NBC News. White House Press Secretary likewise said the U.S. would discontinue using horses.

State Department Spokesperson Ned Price pushed back on Foote's claims, suggesting that the former envoy's input was taken into account.

"It is unfortunate that, instead of participating in a solutions-oriented policy process, Special Envoy Foote has both resigned and mischaracterized the circumstances of his resignation," Price said in a statement.

Psaki echoed Price, claiming that Foote "never once" brought concerns about the administration's migration policies prior to his stepping down.

"I would note that Special Envoy Foote had ample opportunity to raise concerns about migration during his tenure," she said in a press briefing. "His purview was, of course, being the special envoy on the ground. His positions were and his views were put forward. They were valued. They were heard. Different policy decisions were made in some circumstances."

CNN reported that 1,401 Haitians have been deported back to Haiti as of Sunday, according to the Department of Homeland Security (DHS), with under 5,000 migrants still in the Del Rio sector. The DHS said that it intends to increase its deportations to seven return flights a day. Meanwhile, 3,200 Haitians have been placed into the custody of Customs and Border Protection.

The development comes as conditions in Haiti – still grappling with the consequences of a devastating earthquake from 2010 – remain unstable, according to CNN. In recent months, Haiti has been rocked by the COVID-19 crisis; the assassination of its late president, President Jovenel Moise; and another earthquake in August, which left over 2,000 dead. To boot, criminal violence has also spurred significant displacement of the nation's residents, fueling attempted migration into the U.S.

"People still have yet to get drinking water and medical care," Nicole Phillips, the legal director for Haitian Bridge Alliance, told CNN. "So what needs to happen is to stop the deportation flights to Haiti effective immediately and instead welcome Haitians to screen them for asylum ... so they don't have to return to where they fled."

On Monday, Homeland Security Secretary Alejandro Mayorkas jetted to Del Rio to address the situation, claiming migrants falsely believed they'd be admitted into the U.S. as part of Biden's Temporary Protected Status policy – which allows Haitians to remain in the U.S. for an unspecified period of time, according to NBC News.