Empire of chickenhawks: Why America's chaotic departure from Afghanistan was actually perfect

We screwed up 20 years of pointless war. We didn’t win. We lost. Why wouldn’t we screw up the final exit? 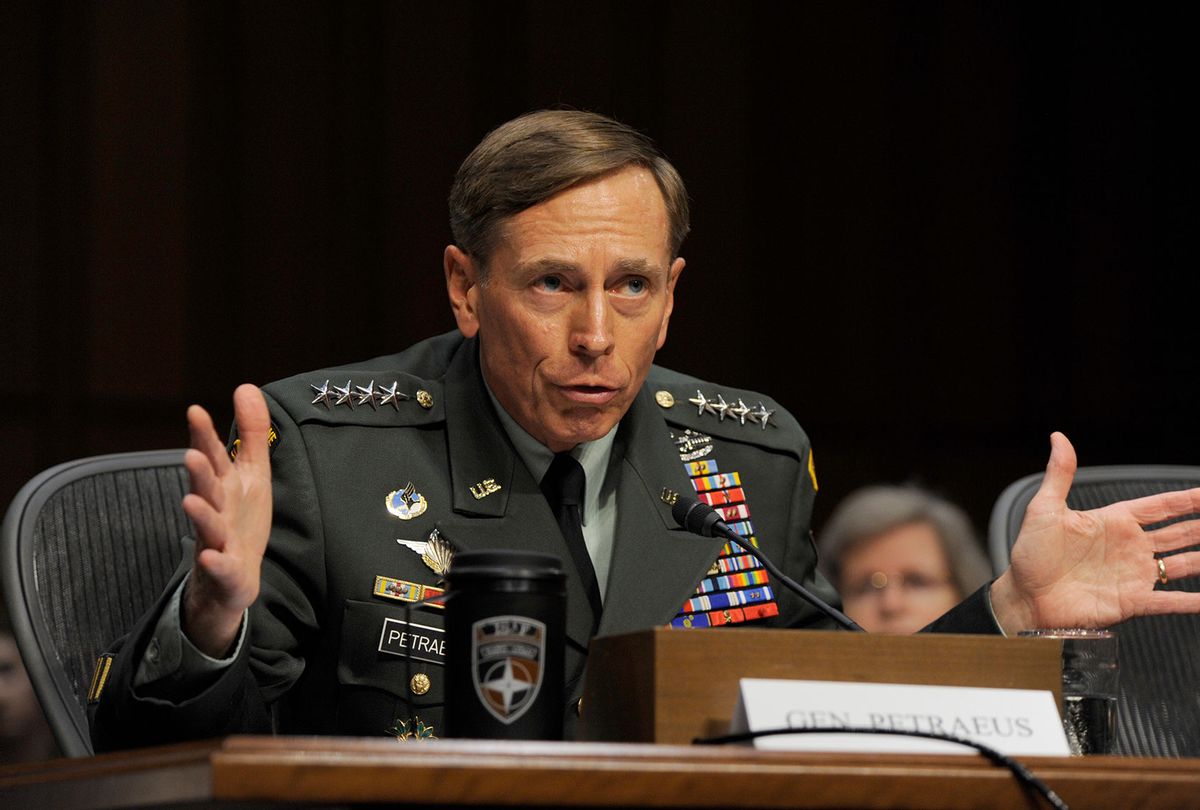 The biggest fallacy about our exit from Afghanistan is that there was a "good" way for us to get out. There is no good way to lose a war. With defeat comes humiliation. We were humiliated in the way we pulled out of Kabul — and we should have been, because we believed the lies we had been told right up to the last moment.

The lies we heard at the end of our war in Afghanistan wereas the same ones we were told, and were only too happy to believe, for 20 long years: that everything was going swimmingly. Remember earlier in the summer when the headlines were about how the Taliban controlled a large percentage of the territory in Afghanistan, but the Afghan government and its supposed army still controlled the provincial capitals and Kabul, and that was where the power was.

What a total crock of shit. Everyone was shocked — shocked — when the headlines started to come. Aug. 9, from the AP: "Taliban press on, take two more provincial capitals." That story was a doozie. "On Monday they [the Taliban] controlled five of the country's 34 provincial capitals." It didn't really matter which two capitals the Taliban had taken. You had to read way down in the story to discover they were Aybak, capital of Samangan province, and Sar-e-Pul, capital of Sar-e-Pul province. Where the hell were they? Who had even heard of them?

That was Monday. By Wednesday, Aug. 11, here was the headline in Al Jazeera: "Timeline: Afghanistan provincial capitals captured by the Taliban." How many, you might ask? In two days, the count had ballooned from five capitals to 18. Eighteen. Later that day, both Al Jazeera and Reuters were reporting that U.S. intelligence sources were saying that Kabul could "fall to Taliban within 90 days."

How did Afghanistan collapse so quickly to Taliban control? Because "we" — the U.S. military and its NATO allies — never controlled it to begin with. Nor did our puppets in the so-called Afghan government. The idea that we ever did, that we ever "controlled" or even had our finger on the pulse of the "graveyard of empires" was a lie.

You know who told us that lie? Every government from George W. Bush on, and every general ever put in charge of that doomed mission. Every single one of them reported that all was well, that the Afghan army was 300,000 strong, that the Taliban was on the run, that the Afghan air force was taking over from the missions flown by American warplanes, that the Afghans had their own helicopters now. And that the Afghan president, whether it was Ashraf Ghani or Hamid Karzai, was firmly in charge back in Kabul.

And you know who went along with that fiction? The United States Congress, which voted for 20 years to spend the $2 trillion we pissed away over there, and each of the presidents — yes, including Barack Obama and Donald Trump — who approved every increase of troops, every troop withdrawal, every "surge" that was advertised as the solution to end all solutions, the thing that would finally put the Taliban on the run. Remember all the Taliban commanders we were told were killed? A drone strike took out this one! Another drone strike took out that one! Wow! We had to be winning if the Taliban was losing so many important leaders!

And then there were the keyboard commandos back in Washington and New York, and the neocons from the Council on Foreign Relations, and the growing chorus of retired generals — among them all of the commanders of our Afghanistan mission — who were all over the op-ed pages and cable news assuring us that All Was Well, as they racked up the megabucks sitting on the boards of defense contractors selling all the military shit that was winning the war for us. "The eight generals who commanded American forces in Afghanistan between 2008 and 2018 have gone on to serve on more than 20 corporate boards," the Washington Post reported on Sept. 4, three days after we exited from Kabul with our tail between our legs.

There was Gen. Stanley McChrystal, who oversaw the big "surge" of 2009 that was the answer-to-end-all-answers to every problem we were having over there. He has been "a board member or adviser for at least 10 companies since 2010, according to corporate filings and news releases," the Post reported. There was Gen. Joseph F. Dunford Jr., who commanded allied forces in 2013 and 2014, who went on to serve on the board of Lockheed Martin, the gigantic defense contractor. There was Gen. John R. Allen, commander in Afghanistan before Dunford, who is the president of the Brookings Institution, which has received $1.5 million over three years from Northrop Grumman, according to the Post. And Gen. David Petraeus, who preceded Allen and now sits on the board of KKR, a private equity firm in New York with many investments in the defense industry.

All of these gentlemen — and let's take a moment to note they are all men, not a female commander among them — reported back to us from their command posts in Afghanistan how well things were going over there, how we were all over the Taliban, how the Afghan government was successfully "standing up" its well-equipped, well-trained army to defend the country from the Taliban. And then they went on cable TV and continued their lies when they got back to the U.S. and retired from the Army, because that's what generals today do. They sit on corporate boards, they give incredibly well-paid speeches, they go on TV and they rake in the Big Bucks because they were so successful in Afghanistan … and in Iraq, too. Remember Petraeus and his "surge" in 2007? Boy, were we ever surging, huh? I remember Newsweek published a cover image of Petraeus in 2004 wearing in his combat fatigues, standing on a tarmac with a Blackhawk helicopter behind him, with the headline: "Can this man save Iraq?" The story, believe it or not, was about how Petraeus was taking over the training of the Iraqi army, and that was what was going to "save Iraq." Don't you think we should have concluded, when the "surge" became necessary in 2007, that Petraeus had utterly failed in his mission to train the Iraqi army and "save Iraq" back in 2004?

The words "crock of shit" again come to mind, but they are far, far from adequate. These presidents, and these members of Congress, and these generals, and these war-happy pundits, ran a great big gigantic con on the citizens of this country who were paying the taxes which — someday, perhaps — will pay for the $2 trillion we pissed away over in Afghanistan, and the trillions we pissed away in Iraq, too. They lied over and over and over again that with just another troop surge, or another troop withdrawal (because suddenly everything was hunky-dory) and of course just another infusion of billions and billions of dollars and the lost of a couple thousand more American lives we could "win" in Afghanistan and "win" in Iraq.

Over there, they laughed at us. The Afghans and the Iraqis who took the money, took all the equipment we gave them, took 20 years of our politics and our "prestige" as a nation, and the whole time they were laughing their heads off, because they knew what we didn't know. None of it was working. None of it would ever work. And one day we would be headed out of both countries with our tails between our legs, because that's what you do when you lose.

That's why our frantic, chaotic exit from Kabul was perfect, because it perfectly capped off 20 years of lies about what was really going on over there, 20 years of frantic, chaotic thrashing around and throwing money and the bodies of young American men and women at a problem that could never be solved. It was an enormous delusion that we, the United States of America, could march into those countries thousands of miles away from our shores and — if we spent enough money and invented and fielded enough "mine resistant vehicles" and fired enough missiles from enough drones at enough "Taliban commanders" — could somehow emerge from those quagmires victorious.

We couldn't, and we didn't, and when that American major general, all kitted-out in the combat gear we spent 20 years dressing our soldiers in, scampered up the ramp of that cargo jet to steal away from the Kabul airport in the middle of the night, it was the absolute perfect ending to the perfect disaster the war in Afghanistan had always been. We were humiliated in front of the entire world, as we should have been. The way we left Afghanistan "did damage to our credibility and to our reputation," the famous Gen. Petraeus told CBS when it was all over.

Yeah, it did, Dave, and it should have. Maybe now the geniuses who got us into those godforsaken disastrous wars and kept us there will think twice before they do it again.

Except, wait. That was supposed to have been the great "lesson of Vietnam." Never mind.