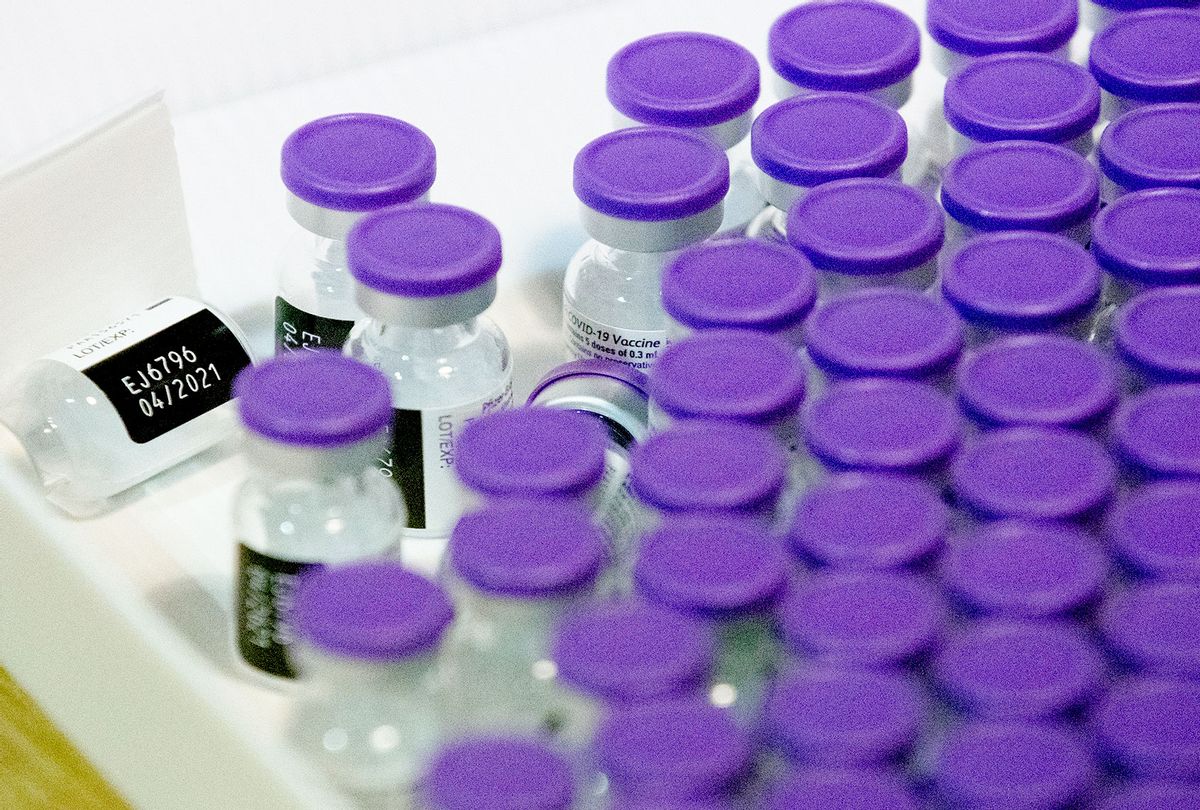 Watching the news these days, I am often reminded of a scene from the second "Lord of the Rings" film, in which hobbits Mary and Pippin try to convince the tree-like Ents to join in the fight against evil to save Middle Earth. The Ents form a circle and, very slowly, begin conversing with each other in all their different tree languages. After what feels like an eternity, one of the hobbits asks if they have reached a decision. The Ent leader leans over with a smile and says the Ents have just finished saying hello. Meanwhile, Middle Earth is literally burning.

This is oddly reminiscent of the international crisis today. Almost a year ago, India and South Africa proposed a resolution for a patent waiver for all COVID-19 related technologies at the World Trade Organization (WTO). Essentially, the patent waiver is an assertion that a company's patent will not be enforced; in the case of a vaccine, it means that any company or government, not just the vaccine's creator, can use the same recipe to make the same vaccine.

India and South Africa proposed this resolution after they realized that rich nations were quickly buying up all the vaccine doses in pre-purchasing agreements, while pharmaceutical companies showed no intention of sharing their patents and know-how with producers in developing countries.

Since their proposal, little has happened. In the eleven months since, various drafts of the resolution have been kicked around the WTO, but no final draft has been submitted and no vote scheduled. Maddeningly, one of the chief arguments Big Pharma posits for opposing the waiver is that it would take too long to build production facilities.

Fortunately for would-be vaccine producers in lower- and middle-income countries, this claim about timing is false. Evidence shows that once technology is transferred to generic drug makers, it takes on average six months to start producing vaccines. One company in Argentina was able to get up and going in three months.

But this isn't the only lie Big Pharma is pushing to persuade rich members of the WTO that a patent waiver is unnecessary. For months, the pharma lobby has argued that even if all patents are waived, generic companies won't be able to manufacture doses unless the originator company gives up their know-how. They say this, of course, with a straight face as if this isn't completely in their own power to do.

In May of last year, the World Health Organisation (WHO) launched the COVID-19 Technology Transfer Pool (C-TAP), intended to serve as a global knowledge fund where pharma companies and research institutions could pool their relevant intellectual property and know-how. The aim was to ensure that all information would be publicly available in one place. The knowledge fund was created in the early days of the pandemic when world leaders shouted for a "people's vaccine," and governments threw heaps of taxpayer money at pharma companies to develop them.

To get an idea of why know-how transfer is important, imagine the most complex piece of Ikea furniture you've ever built. In this analogy, the patent is the thing that tells you what all the pieces and parts are that make up your dresser.  If you don't want to end up putting the wooden screw in the wrong place, you need the know-how printed in the instructions, which is exactly what the pharma companies are refusing to share.  Moderna has very benevolently said it will not enforce any of its patents (though some might not be valid anyway) during the course of the pandemic, but has thus far refused to give up its know-how so that other companies can copy its vaccine making recipe.

This situation could easily have been avoided. While the U.S. and other countries were busy dishing out money in unprecedented amounts so that companies like Moderna could produce vaccines in record time, they neglected to contractually require pharmaceutical companies to contribute their patents and know-how to the C-TAP. As of today, the C-TAP is empty of any relevant intellectual property for COVID vaccines — including patents, data, and technology.

Another argument Big Pharma gives against the patent waiver is that it will undermine innovation — because, in their words, companies will be less likely to invest in making vaccines if they think they won't make enough money to cover their costs.

This argument is easily debunked. Much of the cost of innovation was paid for in public funds. The Oxford (AstraZeneca) vaccine received 97% of its funding from public institutions. The Moderna vaccine was 100% funded by US taxpayers. And Pfizer received nearly half a billion from the German government. This means that taxpayers de-risked the pharma companies of their investment to the tune of $112 billion in less than a year.

Pharma companies also say that pooling intellectual property is useless because vaccine manufacturing is at full capacity and there aren't any more generics companies out there that could make vaccines. This is also not true. Teva Pharmaceuticals in Israel announced they were giving up plans to manufacture vaccines because they did not manage to negotiate a license, and companies in India and Canada have said they are ready and willing to begin producing vaccines once they have access to the know-how and patent rights are waived.

While WTO member states are busing arguing over how to phrase the patent waiver, the pharma lobby has argued that developing countries should make use of the so-called "TRIPS flexibilities" that allow for compulsory licensing. These provisions allow countries to bypass patents without the owner's consent, but only for domestic use. There is one provision known as Article 31bis which allows for the export of pharmaceutical products, but it is so cumbersome and difficult to use that it has only been used once. A generic drug company in Canada is trying to use Article 31bis to produce 15 million doses for Bolivia, but in six months hasn't managed to get a compulsory licence because their request is lost in an administrative juggernaut.

While the WTO is deciding whether to get its act together, poor countries have had to rely on charity handouts from COVAX, a worldwide initiative for equitable vaccine access, to deliver vaccines. So far, there have been over six billion doses of the COVID vaccines distributed globally, but they have been far from equitably distributed; notably, only 2% have gone to the African continent.

On September 16, the WHO announced that COVAX will have to slash 150 million doses for Africa, and that an additional 470 million doses are needed to reach the goal of vaccinating 40% of the population by year end. Last week the continent recorded 8 million cases. The actual number is apt to be much higher.

Big Pharma is quick to point out that they have brokered contracts with manufacturers in India and South Africa, the same two countries that have requested the waiver, and that because they are actively engaging with biotech companies there is no need to waive patent rights. Yet many of the doses produced in those developing countries were not for domestic use, and instead were shipped off to rich countries who already had contracts for more doses than they have people.

Johnson and Johnson, the maker of the single-dose vaccine, is producing 600 million doses at the Indian biotech company Biological E, but will likely export those doses to the EU and the US. Last month former UK Labour Prime Minister Gordon Brown said that 10 million doses produced in South Africa were being shipped abroad, despite the fact that only a small fraction of the African population had been vaccinated.

The reason for this inequality is simple. The pharmaceutical companies have monopoly rights so they get to decide who gets the vaccines and at what cost. Earlier this year Oxfam reported that Pfizer and Moderna are charging governments as much as $41 billion dollars more than the cost of production for vaccines, and that vaccines could be five times cheaper if pharma companies weren't profiting from their monopolies.

In February, the Bureau of Investigative Journalism revealed that Pfizer resorted to "bullying tactics" with two Latin American countries during negotiations, which led to months of delays and included the request that sovereign assets be used as collateral for payments. If generics companies in the developing world didn't have to worry about being sued for patent infringement, they would be one step closer to producing vaccines for their own people and at a price they can afford.

In May of this year, President Biden managed to shock the pharma industry when his administration announced its support for the patent waiver. But despite his support, the waiver still faces an uphill battle at the WTO where all 164 member states much reach a consensus, with any single nation able to issue a veto. This means that a final resolution of the waiver is likely to be a much-watered down version of the original, and that is if any resolution gets a vote at all.

In their opposition to the waiver, the pharma industry has forgotten that a patent is a bargain between society and an inventor. It allows the inventor to receive financial compensation in the form of a temporary monopoly while society enjoys the benefit of the invention. In most cases this bargain equally benefits both sides and encourages innovation so that society can evolve. But something about that bargain is fundamentally broken when society gives the pharma industry billions of dollars to fund medical research, and is then held to ransom with zero say in how that medicine is used.

Like with many things in life, there isn't one easy solution that will solve a very complex problem. Big Pharma is right to say a patent waiver alone won't close the growing disparity in vaccine distribution, but it is a necessary part of a multi-faceted solution that includes know-how transfer and temporarily forfeiting intellectual property rights in order to put saving lives first and profit second. Breaking the patents and sharing the know-how would give developing countries the tools they need to be self-reliant in a time of crisis so that they do not need to depend on the charity handouts of wealthy nations who have monopolies on producing life-saving medicines.