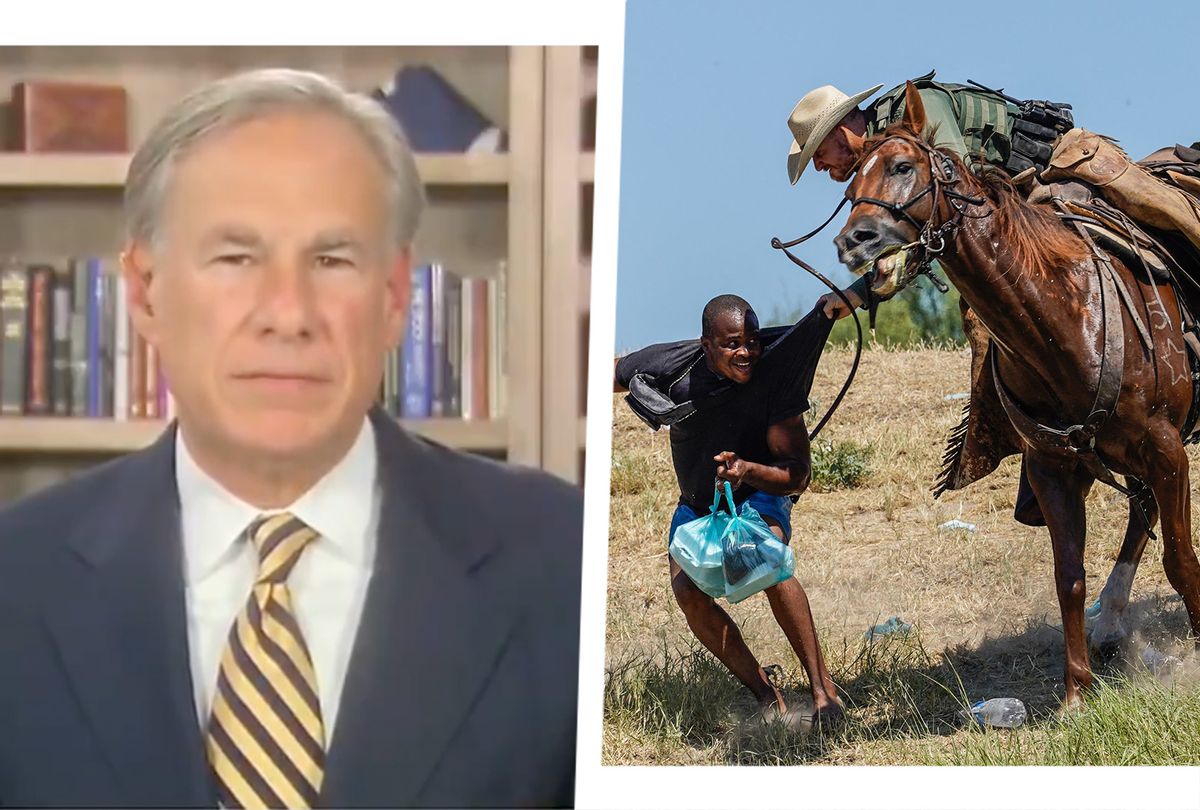 Even as a dual pair of infrastructure and spending bills dominated the Sunday morning cable news shows, the situation at the southern U.S. border took up a hefty amount of oxygen on Fox News Sunday — particularly during an interview with Texas Gov. Greg Abbott.

Host Chris Wallace asked Abbott at one point what he thought of recent images of border patrol agents on horseback this week physically intimidating migrants seeking asylum from Haiti, prompting Abbott to double down on his vision of the border as an apocalyptic, lawless place. He even offered to thumb his nose at President Joe Biden's authority by staffing his own law enforcement force on the border with employees the administration fires for inappropriate conduct.

"If he takes any action against them whatsoever — I have worked side by side with those Border Patrol agents — I want them to know something. If they are risk of losing their job by a president who is abandoning his duty to secure the border, you have a job in the state of Texas. I will hire you to help Texas secure our border," Abbott said.

Wallace followed up by asking if that exceeded his authority as governor — a criticism echoed by U.S. Attorney General Merrick Garland this week, after he threatened to sue Abbott over the state's border policies.

Despite the legal threat, Abbott did not moderate his response.

"Because the Biden administration is refusing to do its duty to enforce the laws of the United States, they have left Texas in no position other than for us to step up and do what we have to do," Abbott said. "I'm going to step up and do whatever I have to do to make sure that I protect the people of Del Rio, as well as all these other communities in the state of Texas that the Biden administration is ignoring."

Regardless of the Texas governor's rhetoric, the Biden Administration appears to be holding the course on its immigration plans, despite a recent influx of new asylum seekers hailing from Haiti.

During a separate interview on the same program, Homeland Security Secretary Alejandro Mayorkas said the most recent spike in migrants was "nothing new," and cautioned people from using the sort of alarmist rhetoric parroted by right-wing media outlets in recent months.

"This is nothing new," Mayorkas said, responding to Abbott's comments. "We've seen this type of irregular migration many, many times throughout the years. I don't know if Governor Abbott said the same thing in 2019, when there were more than a million people encountered at the southern border.

Wallace did at one point ask — prefacing the question with "forgive me" — whether or not the administration would be better served reprising the Trump Administration approach of building a "wall or a fence."

"It is the policy of this administration: we do not agree with the building of the wall," Mayorkas responded. "The law provides that individuals can make a claim for humanitarian relief. That is actually one of our proudest traditions."

In addition to his questions on the topic of migrants, Wallace also grilled Abbott on his bizarre pledge to "eliminate" rape — a vow he made in response to criticism of a recent, near-total abortion ban he signed into law that does not carry any exceptions for pregnancies caused by rape or incest.

"Is it reasonable to say to somebody who was the victim of rape and might not understand that they are pregnant, you know, until six weeks, 'Don't worry about it because we are going to eliminate rape as a problem in the state of Texas?'" Wallace asked.

"There's multiple things I have to say in answer to this but the first thing obviously is that survivors of sexual assault, they deserve support, care, and compassion and Texas is stepping up to make sure that we provide that by signing a law and creating in the governor's office a sexual assault survivors task force — separately from that, Chris, I got to point out about the ways that I have fought to go to arrest and apprehend and try to eliminate rape. I sought the death penalty."

Wallace tried — repeatedly — to pin Abbott down on the question of whether he would sign an exception to the current law for rape or incest if such a bill were to come across his desk.

Abbott never gave a definitive "no" — saying only that the law was "consistent" with the Supreme Court precedent, which asserts "states have the ability to make sure that we protect the health and safety of both the mother and the child."

"Chris, you're making a hypothetical that's not going to happen because that bill is not going to reach my desk," he said. "Again, the goal is to protect the life of every child with a heartbeat."