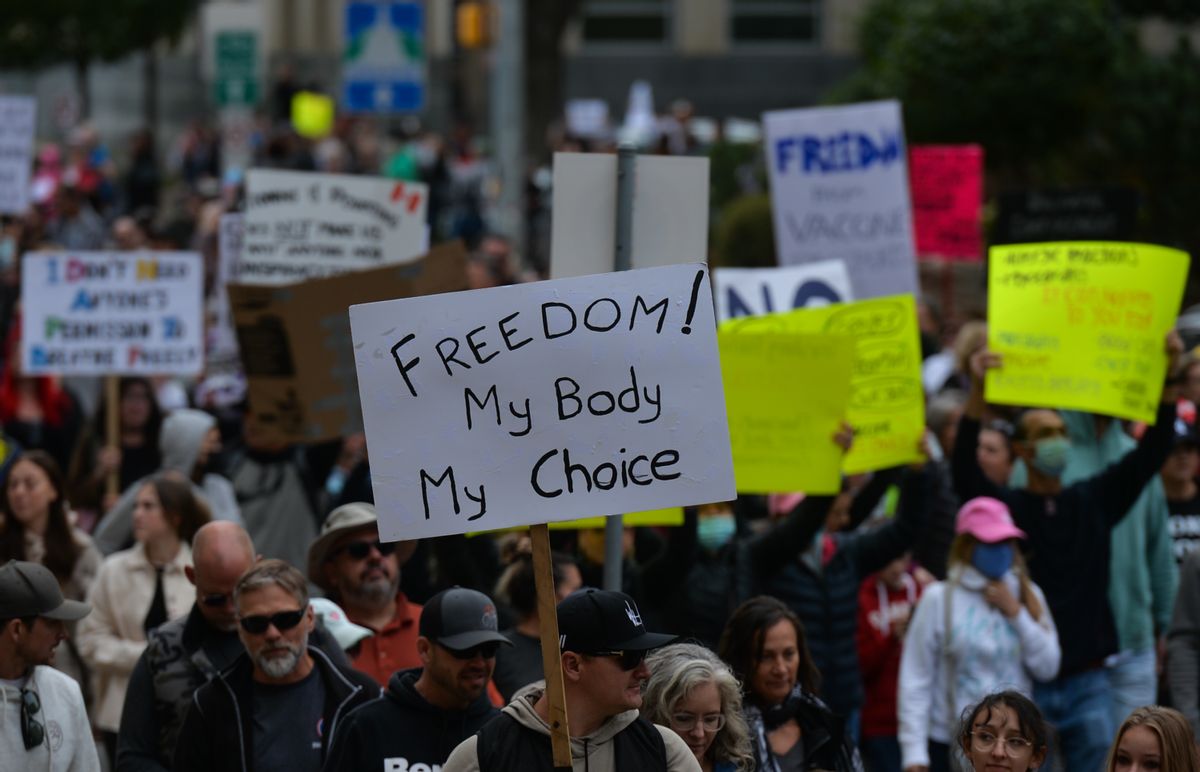 Anti-vaccine protesters hold signs, including one which reads "Freedom! My body, my choice." (Getty Images)
--

A new trend circulating on TikTok is further contributing to the anti-vaccination extremism and the rapid spread of misinformation regarding the COVID-19 pandemic.

According to Crooks and Liars, the hashtag #PureBlood shows that supporters of the far-right are not only "unable to distinguish between J.K. Rowling's Harry Potter wizarding world and their own, but simultaneously appear either oblivious to the fact that either they're identifying with the story's fascists, or perhaps wink-and-nudgingly embracing their eugenics."

Vice reporter Tess Owens initially reported on the disturbing trend. According to Owens, self-proclaimed "purebloods" are individuals who are not vaccinated for COVID. In one TikTok video on the topic, the onscreen caption read, "We will No longer be referred To as Unvaxxed… We simply go by…." Then the phrase "Pureblood" appeared on the screen in red letters.

One TikTok influencer named Lyndsey Marie helped popularize the trend when she made a declaration in support of it. In a video, she said, "From now on, I refuse to be referred to as 'unvaccinated. I want everyone to now call me Pureblood." The video, which received more than 250,000 views before Marie changed the viewing setting to private, has spawned a number of other similar videos from other TikTokers.

According to Daily Kos writer Aysha Qamar the latest pureblood trend underscores a growing problem on TikTok, as it has become a driving force for the spread of more Covid misinformation.

"A newly released Homeland Security briefing found that insurrectionists used TikTok to spread information about the Jan. 6 Capitol attack and interfere with the National Guard during the riot and information about how to access the White House via tunnels and sabotage railroad tracks. According to the briefing document, domestic extremists have been using TikTok since October of 2019 to "recruit adherents, promote violence, and disseminate tactical guidance for use in various terrorist or criminal activities.

"According to another report published in August 2021 by the Institute for Strategic Dialogue (IDS), at least 491 accounts were found that shared a combined number of 1,030 videos that promoted hatred, extremism, and terrorism. … At the time of writing the report, the Institute found that 81.5% of the extremist videos they identified on the platform were still live."

Social media networks are continuing their fight against misinformation, but content is plentiful.