It's time to start firing unvaccinated people: Trump fans are overdue for a lesson in consequences 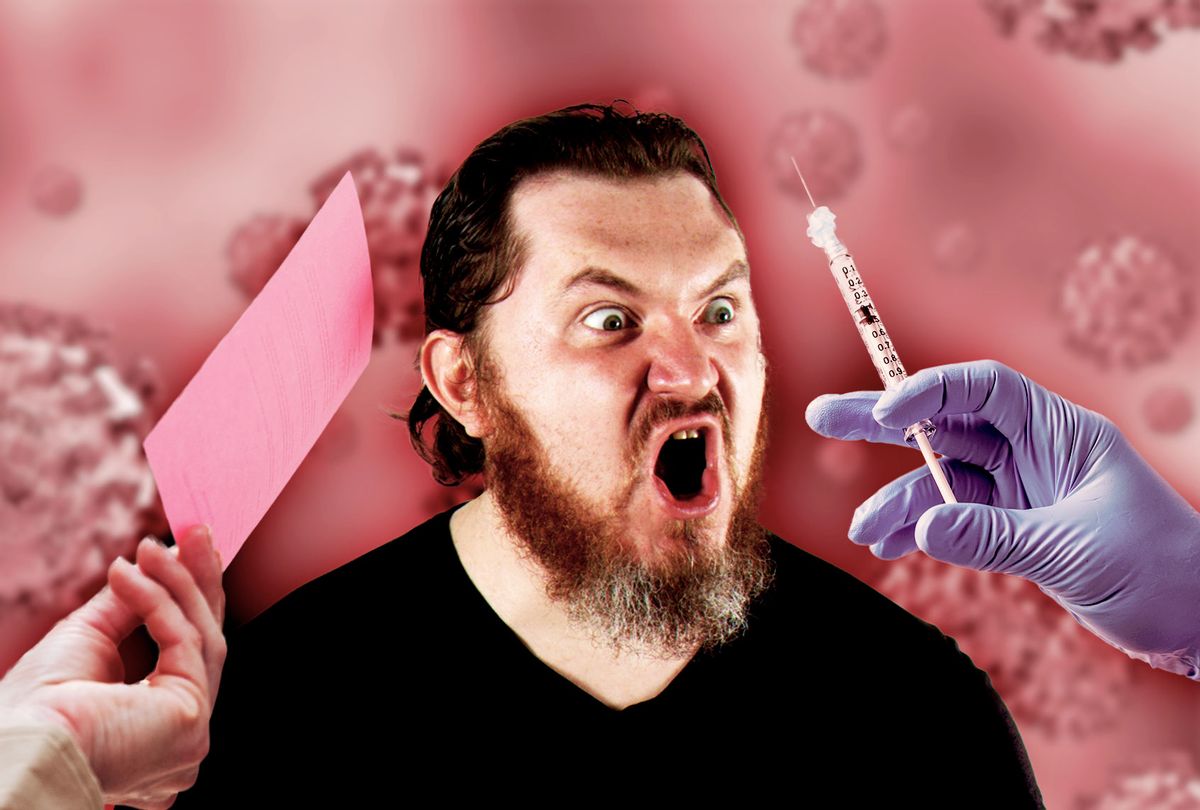 Man refusing the vaccine, and getting a pink slip from his job, concept (Photo illustration by Salon/Getty Images)
--

For those readers who only peruse headlines — which, as anyone who has access to news website analytics can tell you, is a shockingly huge percentage of readers — the impending first round of vaccine mandate deadlines are looking like very scary business indeed. Not for people who are afraid of needles, mind you, but those who are afraid that mass resignations and firings — and subsequent staffing shortages of essential workers — are coming.

"These Health Care Workers Would Rather Get Fired Than Get Vaccinated," reads a Monday morning headline at the New York Times.

"Rural Hospitals Worry They Will Lose Staff Because Of Biden's New Vaccine Mandate," warns an NPR headline from over the weekend.

"New York May Use The National Guard To Replace Unvaccinated Health Care Workers," read another.

The state of New York is the first test case of what actually enforcing a government-issued vaccine mandate looks like. Monday is the deadline for health care workers in the state to get the jab or get the pink slip. As the New York Times reports, "resistance to vaccine mandates has so far stopped most states from threatening to fire unvaccinated workers." But New York's newly appointed governor, Democrat Kathy Hochul is calling the unvaccinateds' bluff. Rather than caving in and letting them keep their jobs, she is prepared to call the National Guard to fill in the shortages left by the upcoming firings.

Despite the media doom and gloom, the truth is Hochul needs to be commended for her spine. And every other Democrat who wants to see this pandemic actually come to an end (which should be all of them!) should follow suit. Staffing shortages are a pain, especially during a pandemic, no doubt. But staffing shortages are a minor issue compared to the damage being caused by the unchecked spread of COVID-19, which is increasingly due to one cause: right-wingers who have made refusal to get vaccinated a culture war and identity politics issue. Unless such folks start tasting real consequences for their behavior, the U.S. is going to see another dark winter, as the virus continues to wreak havoc on our economy and health care system. Putting up with staffing shortages is a small price to pay to make sure that Trumpers — a class of people clearly unused to the idea that actions have consequences — actually start feeling real pressure to get vaccinated.

A few paragraphs under the scary headline about "mass firings" in the New York Times comes the actual numbers: "As of Sept. 22, state data shows, around 84 percent of New York's 450,000 hospital workers and 83 percent of its 145,400 nursing home employees had been fully vaccinated." That is almost 10 percentage points over what the same state data set shows as the overall vaccination rate in the state. There are similar positive results in New York City, where Mayor Bill de Blasio mandated vaccines for public school workers, resulting in a 90% vaccination rate among teachers, which is 9 percentage points over the city average. Hospital systems that instituted an earlier vaccine mandate have seen even better results. New York Presbyterian, for example, set the deadline for last Wednesday and already 99% of the system's 48,000 workers are vaccinated.

The effectiveness of mandates has been documented outside of New York as well.

As Dr. Ezekiel J. Emanuel, a former White House health policy adviser who works for the University of Pennsylvania now, told Fierce Healthcare, "healthcare systems that have actually mandated this" have " retained over 99% of their workforce." The article goes on to list over a dozen hospital systems that have implemented mandates. In every case, the fraction of workers lost was tiny — certainly well worth losing to protect patients and the larger community from COVID-19.

There's been a similar success at United Airlines, which will start putting workers on leave this week if they don't get vaccinated. A full 97% of employees have thus beat the deadline.

The number of unvaccinated health care workers is still alarmingly high in New York, and fears of staffing shortages are real. But part of the problem is that the refusal to get vaccinated is being driven by partisan politics. As the New York Times reported about vaccination rates Monday morning, "the racial gaps — while still existing — have narrowed," but the "partisan gap, however, continues to be enormous." The geography of vaccination rates mirrors the political geography, to the point where "almost every reliably blue state now has a higher vaccination rate than almost every reliably red state." The gap also shows up on the county level, with death rates much higher in Trump-voting counties than in ones that went for President Joe Biden.

There's a lot of reasons conservatives cite for this refusal to vaccinate, though ultimately it all boils down to a desire to "own the liberals." But a lot of this pettiness is intertwined with a right-wing bravado. To be blunt, white privilege has long shielded many conservatives from the concept of facing consequences for their actions. We see this in a lot of obnoxious right-wing behavior lately, from tantrums over COVID-19 mitigation measures in public places to the attempted insurrection on January 6. Who can forget how many of the arrested Trump supporters expressed genuine shock that they might actually face a legal consequence for participating in a violent effort to overthrow democracy? This lack of familiarity with consequences is likely why there are so many holdouts, even in the face of vaccine mandates. Bluntly put, a lot of them probably don't think that leaders are serious about these threats to fire them, and won't believe it until it happens. As with the Capitol rioters, there's a persistent disbelief on the right that they will ever face real consequences for their bad actions.

This right-wing overconfidence is why sites like HermainCainAward and SorryAntiVaxxer have such popular followings. Watching people pay with their lives after displaying such certainty their anti-social behavior will never result in a consequence may not be the most righteous use of people's time, but is understandable when the rest of us are suffering because of Trumpist hubris. The problem with highlighting COVID-19 deaths to scare the Trumpers straight, however, is that they can always tell themselves that they're not going to be the ones who die since 98.4% of people in the U.S. do survive.

That's precisely why vaccine mandates are so important. The absolute certainty of losing a job is going to motivate a lot more people than the more abstract risk of dying of COVID-19.

But for that threat to become real, well, it has to be real. This means that it's not enough to threaten to fire people who won't get vaccinated. Employers and governments have to follow through. Hochul is right to do whatever it takes to make sure that the unvaccinated get their pink slips this week. If leaders back down in the face of vaccine resistance, the Trumpers will double down, and continue spreading COVID-19 in a pathetic effort to "own the liberals." Threats cannot be empty, especially when facing stubborn people who believe themselves impervious to consequences. Threats need to be backed up with action. It's time to start firing the unvaccinated.