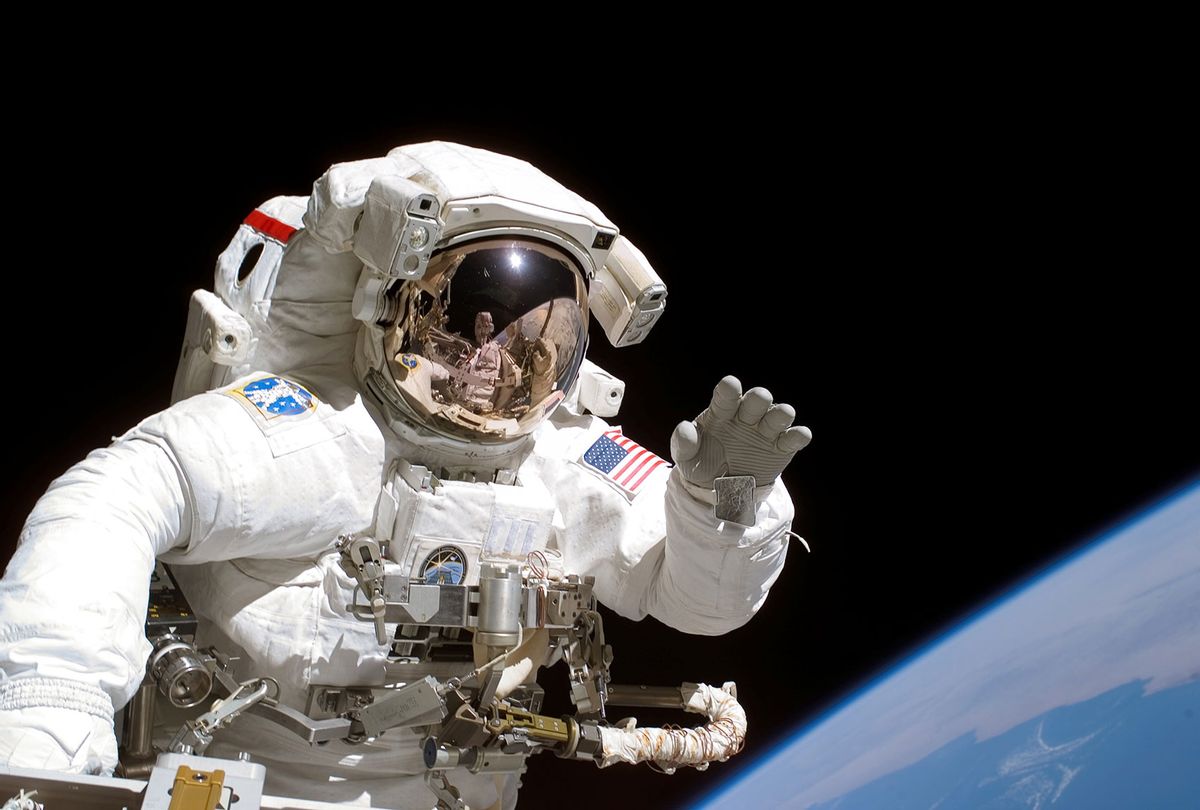 American astronaut Joseph Tanner waves to the camera during a space walk as part of the STS-115 mission to the International Space Station, September 2006 (NASA/Getty Images)
--

On October 5, an unusual crew will fly to the International Space Station. Director Klim Shipenko and actor Yulia Peresild will spend a week and a half on the station shooting scenes for the Russian movie "Challenge." Peresild plays a surgeon who must conduct a heart operation on a sick cosmonaut.

This is an exciting — if controversial — development for the station, which orbits around 400 km above Earth. Commercial use of its facilities could be a funding avenue to keep it in orbit. A Japanese documentary and an American movie, starring Tom Cruise, are also in the works.

The station consists of 16 modules locked together in a cross configuration. There are six Russian modules in the Russian Orbital Segment, while the US Orbital Segment consists of 11 modules run by the US, Japan, and the European Space Agency. Spacecraft like the Soyuz and Dragon regularly dock with the station to bring crew and supplies, and return others to Earth.

Usually there are between three and six crew living on the station. The main work is scientific experiments, but as some parts of the station are over 20 years old, a lot of maintenance is also required.

Space stations in the movies are often very "space-agey" with futuristic minimalist interiors. By contrast, the International Space Station is a mess, more "Red Dwarf" than "2001: A Space Odyssey." There are cables everywhere, walls cluttered with equipment, tools, food packages and notes, and over 6,000 objects lost by the crew.

Challenge, being the first (professional) space movie to be filmed in space, raises a number of questions. Here are five on my mind.

How will the cosmonaut crew react to a female "space tourist"?

After Valentina Tereshkova, the first woman in space in 1963, only four other Russian women have ever left Earth.

Svetlana Savitskaya was the second female cosmonaut in 1982. Her crewmates on the Mir space station presented her with an apron when she arrived, joking that she'd work in the kitchen. I've even heard a cosmonaut trainer say "space is no place for a woman."

However, in Russia, medicine is seen as a female profession. Given that veteran cosmonaut Sergei Krikalev was sacked for objecting to the movie plans (he was later reinstated), I'm wondering what Yulia Peresild's reception will be like.

What about using the space toilets?

Personal hygiene is challenging in the microgravity environment of the space station. Crew must be taught how to use the complicated space toilets, which use vacuum pumps to suck everything away from the body and into tanks. Urine is recycled to augment the station's water supply — as the joke goes, yesterday's coffee becomes tomorrow's coffee.

Then there's the politics of space poo. In 2009, strained relationships between Moscow and Washington resulted in Russian and U.S. crews being banned from using each other's toilets. Crew complained that not being able to use the nearest toilet interrupted their work.

Peresild and Shipenko have been training since May in Russia's Star City, and this presumably includes potty-training too. NASA only installed the first female-friendly toilet in 2020.

In the Russian segment where the filming will take place, there's one old toilet designed for male anatomy. In female bodies there's less separation between pee and poo, so NASA designed its new toilet to take this into account. Will Peresild use the NASA toilet by preference? She'll be the first Russian woman to compare space toilet technology. 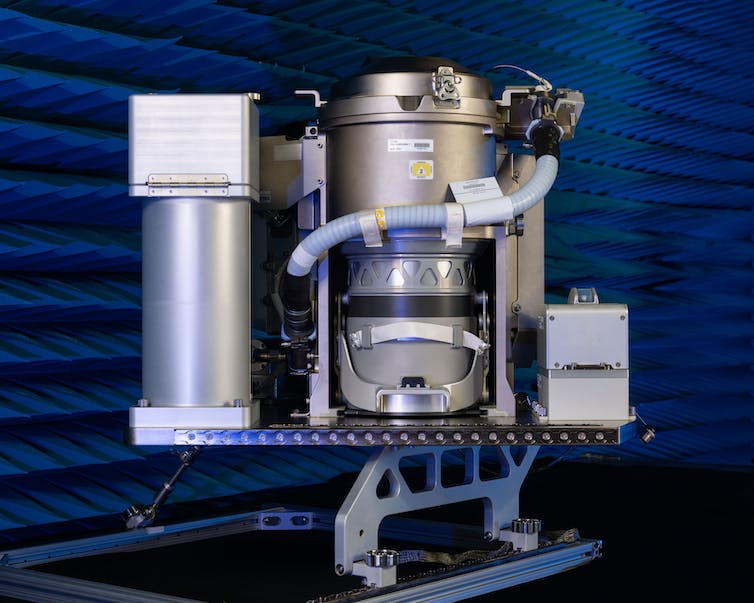 NASA's new US$23 million female-friendly toilet was installed on the ISS in 2020. NASA, CC BY

How realistic will the surgery scenes be?

In space, uncontained liquids form bubbles and float around. This presents some challenges for heart surgery, especially as blood tends to pool in the upper parts of the body. There have been limited surgical experiments already in microgravity, but they have been done on artificial bodies, or animals such as rats.

Technology under development for future space missions, particularly long duration flights like those to Mars, includes robotic surgery and capsules that enclose the patient, with the surgeon operating on them through arm portholes. It will be interesting to see what choices are made to portray this key part of the film.

Read more: From floating guts to 'sticky' blood – here's how to do surgery in space

Will the film crew leave anything behind in space?

As a space archaeologist, I'm interested in whether this unusual activity will contribute to the archaeological record of the station. While the film crew will have to bring all their equipment with them, scientific experiments are prioritised due to limited cargo space when sending things back to Earth. Later crew may find objects left behind by Peresild and Shipenko, stuck to Velcro patches on the walls, or lurking in storage areas.

In the Russian Zvezda module, cosmonauts have made part of a wall into an informal gallery or shrine. Analysis of how the pictures displayed change over time shows it almost always features images of the Soviet space heroes Yuri Gagarin, Konstantin Tsiolkovsky and Sergei Korolev, as well as Russian Orthodox icons.

Peresild's father is a well-known icon painter, so perhaps she will bring one to contribute to this display. 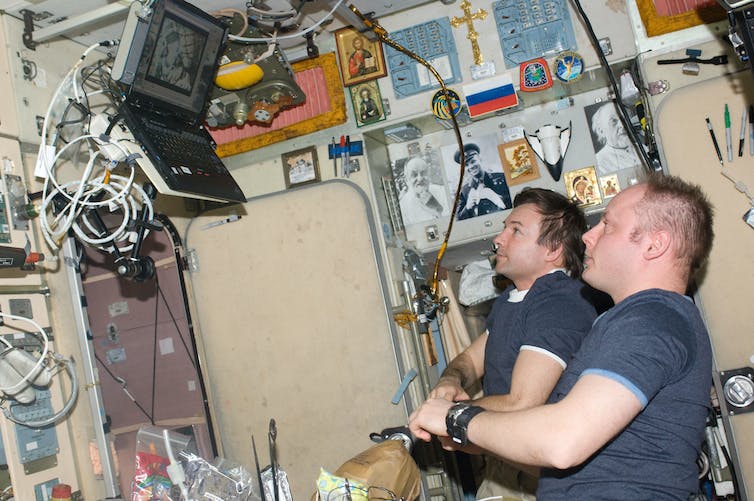 Lots of things get left behind in space — like these images of Russian space heroes hanging on an informal shrine. NASA, CC BY

After this flight, Peresild and Shipenko will officially be space travellers, as well as the first professional filmmakers in space. They'll join the ranks of an elite group who've travelled into orbit.

Although the last year has seen numerous people who have just nudged into space on sub-orbital flights, including Jeff Bezos, Richard Branson and the "civilian" crew, it still means something to actually live in space.

At least 45 films about space travel have received Oscar nominations for Best Visual Effects, but in the case of "Challenge," the visual effects will be real.

Perhaps this will be a turning point in how space habitats are depicted in films. Will audiences prefer the glamorous fantasy, or replace their visions of future space travel with the gritty reality of a working space station?