Hidden figures: In New Jersey and Mississippi, the COVID death rate is higher than Brazil

What unites a blue state with unionized labor and the deep-red cradle of the Confederacy? Racial inequality 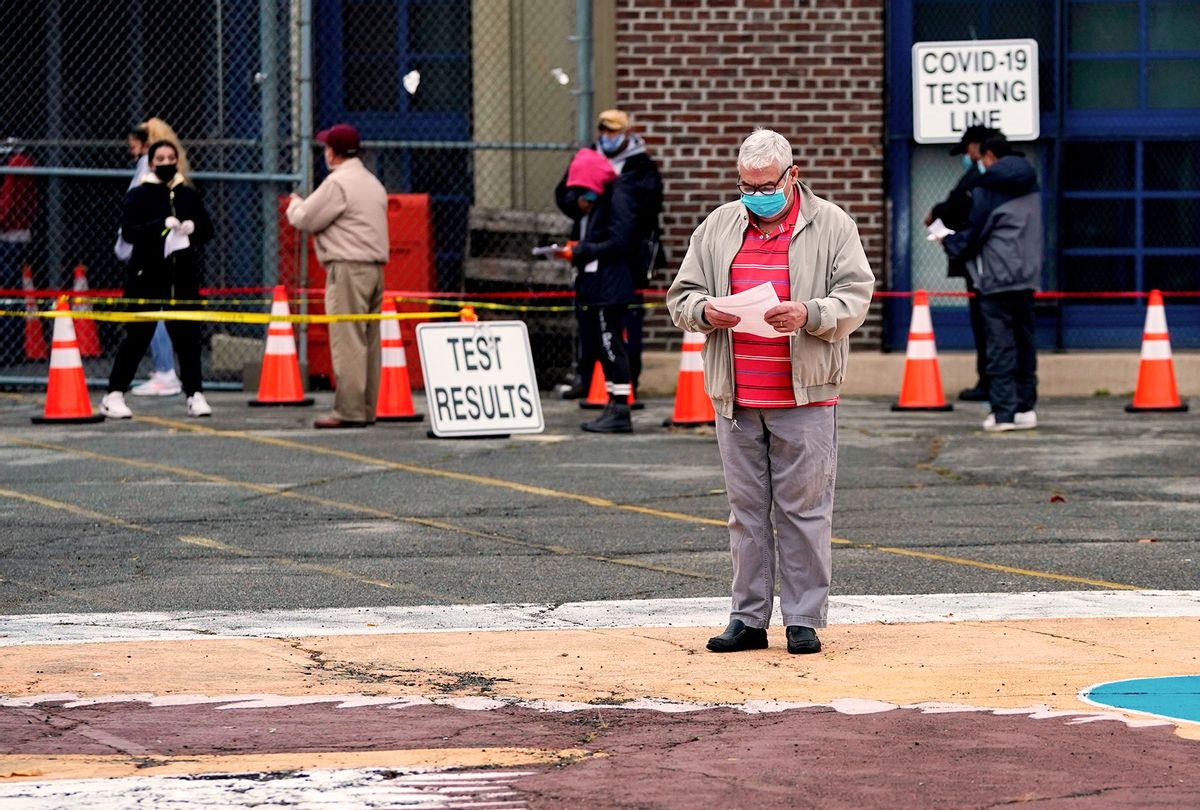 People wait in line to get tested for Covid-19 at the Ann Street School Covid-19 Testing Center in Newark, New Jersey (TIMOTHY A. CLARY/AFP via Getty Images)
--

New Jersey recently lost the dubious distinction of having the highest per-capita COVID death rate in the nation to Mississippi, whose extraordinarily low vaccination rate and lack of a mask mandate have helped fuel the spread of the delta variant.

To get a sense of just how abysmal these numbers are, consider that our two states — a blue unionized labor state that fancies itself progressive, and a red state that was the cradle of the Confederacy — are both global standouts. In both cases, the legacy of generations of systemic racism and lack of access to regular health care has meant that people of color were the most vulnerable to COVID.

In contrasting the latest statistics from Mississippi and New Jersey you see the arc of the tragic American COVID experience, which was entirely avoidable. Our blind partisanship has short-circuited the ability of the states to learn from each other as the overall death toll from COVID blows past the 675,000 lost during the 1918-21 Spanish flu pandemic.

A year and a half plus into the pandemic, Mississippi is now seeing an exponentially higher death count and hospitalization rate than New Jersey. While Mississippi has one of the lowest vaccination rates in the nation, under Gov. Phil Murphy's leadership, more than two-thirds of our state's population is fully vaccinated. Mississippi's vaccination rate is just over 43 percent. Unlike Republican Gov. Tate Reeves in Mississippi, Murphy has advocated universal mask mandates in New Jersey's public schools.

Eight months into Joe Biden's presidency, we remain a badly fractured nation where the seven-day average for daily COVID deaths count is over 2,000, something we haven't seen since March. That's two-thirds the number of Americans who died in the terrorist attacks of 9/11, each and every day.

Even as we close in on 45 million infections, and the reality that as many as 25 percent of those infected will have long-term health consequences of varying severity, Democrats and Republicans in Washington continue to haggle over whether and how to extend the debt ceiling.

Despite the tangible progress we have made battling COVID in New Jersey, we have yet to come to terms with just how vulnerable communities of color were and remain. Accelerating wealth inequality and longstanding health care disparities impacts hundreds of thousands of New Jersey residents of color, a cohort that includes many undocumented immigrants who served as frontline essential workers throughout the pandemic.

Back in April of 2020, Murphy signed legislation mandating that all of the state's hospitals report the age, ethnicity, gender and race of everyone infected. "Understanding the impact of COVID-19 by demographic groups is critical to ensure equity in our response to the virus," he said in a press statement at the time.  "We must do everything we can to protect the most vulnerable in our state during this unprecedented crisis. This data will inform our effort and allow us to make sure that no one is left behind."

As one of the bill's leading sponsors, Assemblywoman Verlina Reynolds-Jackson, said at the time, "Decades of systemic poverty, lack of sufficient health care and chronic unemployment in our communities, especially Black communities, lends to the increased risk of coronavirus hitting residents living below the poverty line harder than others."

Yet more than a year after that bill was signed, experts who have closely followed New Jersey's efforts to document the racial disparities revealed during the pandemic say the state's COVID data collection and dissemination efforts have crucial gaps. According to Dr. Laura A. Sullivan, director of Economic Justice for the New Jersey Institute for Social Justice, the state Department of Health dashboard, which supposedly provides cumulative COVID-19 deaths and hospital discharge data for all the state's municipalities, is "not accurate" and has not been updated since April.

Sullivan said that "localized information by race and ethnicity in communities" is crucial to developing and implementing "tailored approaches to the pandemic." Without good data, it can be difficult or impossible "to make sure that people in the most vulnerable communities of color get their needs met," she said.

To cite one example, the official data for Essex County, in urban North Jersey across from New York City, does not appear to make sense. According to the NJDOH municipal data, while 8,752 Black residents in Newark contracted cases of COVID, or 24.6 percent of all the cases in the city, the site reports only three died, or 4.3 percent. In total, the site indicates just 69 deaths from COVID in Newark, an obviously correct number, with Asians accounting for 37 of those deaths, or 53.6 percent of that total.

For the upscale community of Montclair, the NJDOH chart for Montclair lists just 10 COVID deaths, all attributed to the Asian community. In Irvington, the NJDOH lists 280 deaths — 234 among Hispanic people, 16 among Asians, four in the Black community and none at all among whites.

A closer examination of all 20 Essex County municipalities on the NJDOH website, as updated in April, indicates that the county had close to 2,200 COVID deaths, distributed as follows: 1,150 Hispanic, 479 Asian, 447 "other," 83 "unknown," 59 Black and 15 white. In fact, according to USAFacts.org, as of Sept. 24 Essex County had 3,041 COVID deaths, the highest county total in the state.

Dr. Brittany Holom-Trundy, a senior analyst for New Jersey Policy Perspectives, says that after a "slow start" documenting the demographics of the pandemic, New Jersey has "generally done very well" in ramping up its data collection and is tracking this kind of data "more than some other states."

Years of public health program cuts at both the federal and state level, Holom-Trundy argued, have made agencies unable to respond effectively as the virus spread.

"Health disparities in the COVID-19 pandemic spotlight the long-standing inequities that permeate the health care system," wrote Holom-Trundy in October of 2020. "Though the pandemic has been undeniably devastating throughout the country, the impact on Black and Latinx communities outpaces that on other populations. Nationally, Black and Latinx residents have been three times more likely than white residents to contract COVID-19 and nearly twice as likely to die from it. These patterns are also reflected at the state level."

New Jersey's increasingly diverse population "still sees the impact of structural racism in its housing and occupational divides," she continued. "Past redlining practices have resulted in the segregation of neighborhoods and schools, with many Black and Latinx families living in densely populated metro areas with segregated school districts."

Residents of color in New Jersey, she noted, made "up over half of employees in essential or 'frontline' industries, including grocery stores and pharmacies; trucking, warehouse and postal services; cleaning services; public transportation; health care; and childcare and social services."

That essential worker mix in New Jersey also includes hundreds of thousands of undocumented workers and their families, Holom-Trundy noted, who remain vulnerable to COVID and are often apprehensive about getting the vital medical care that most other residents take for granted.

"We really do need to build toward universal health care," she said. "As we saw during the pandemic, the first people hit by the pandemic ... will be the essential workers, many of whom are undocumented. They are on the frontlines, yet they don't have access to insurance and aren't going to go to the doctor if they start feeling unwell because of the potential medical bills that come with them being uninsured."

Even in the midst of a gubernatorial campaign, these were not the kinds of issues that came up during Murphy and Ciattarelli's debate last week. As the issues we face, like the pandemic and climate change, loom ever larger, our politics continues to shrink, increasingly captive to the small-minded and self-interested.