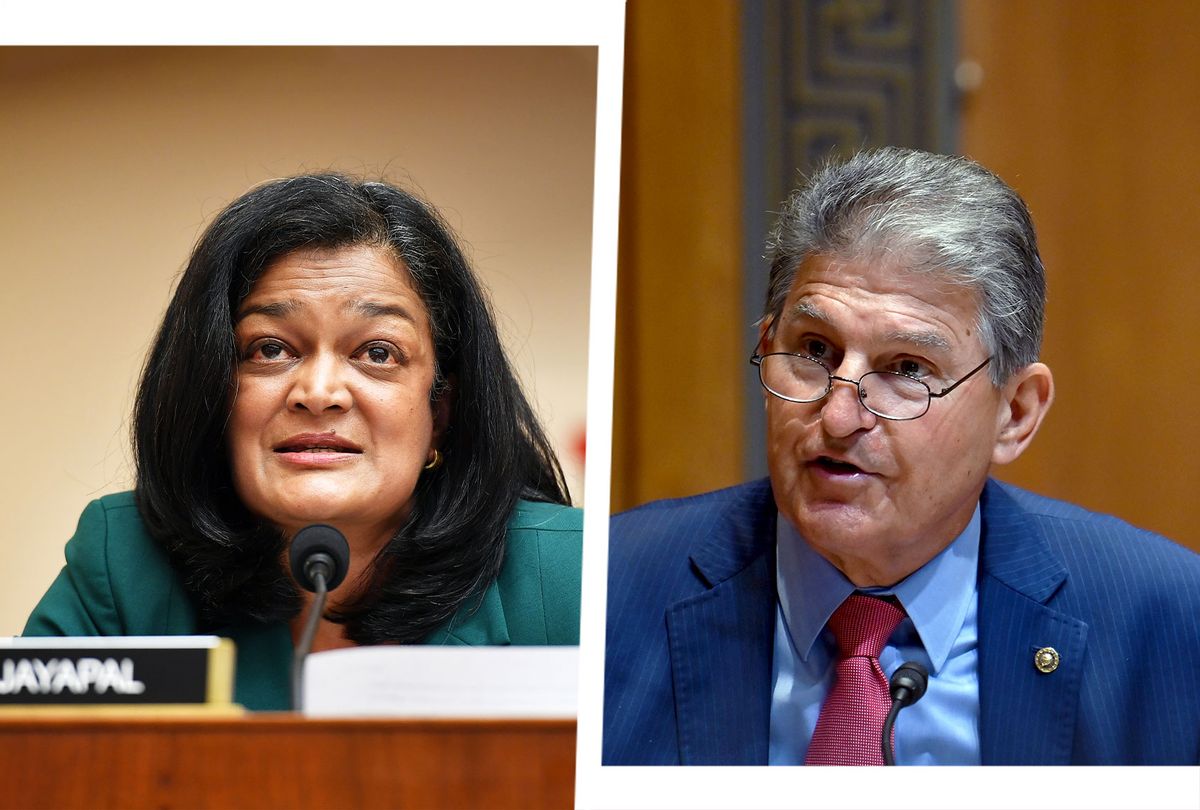 Battle lines appear to be hardening between progressive and more centrist Democrats, with no clear resolution in sight. Led by Senate Budget Chairman Bernie Sanders, I-Vt., progressives originally pressed for a $6 trillion spending bill but ultimately compromised on the $3.5 trillion package embraced by President Biden and Democratic leaders that would fund climate change initiatives, expand health care and child care and pursue other key Democratic priorities.

Manchin, the West Virginia moderate who plays a crucial role in the Democrats' 50-50 Senate "majority," has criticized the price tag for weeks. Last week he countered last week with a $1.5 trillion proposal — which would slash the Biden package by nearly 60% — after Jayapal led a progressive blockade that delayed a House vote on the bipartisan Senate infrastructure bill Manchin had helped negotiate.

"That's not going to happen," Jayapal told CNN on Sunday, speaking of Manchin's proposal. "That's too small to get our priorities in. It's going to be somewhere between $1.5 and $3.5 [trillion], and I think the White House is working on that right now because, remember, what we want to deliver is child care, paid leave and climate change, housing."

Biden and Democratic leaders had initially agreed to advance the $1 trillion infrastructure bill and the $3.5 trillion spending bill at the same time to avoid alienating progressives who were unhappy at the lack of climate change funding and other priorities in the Senate package, which was negotiated with Republicans.

But House Speaker Nancy Pelosi, D-Calif., later cut a new deal with a rogue group of House moderates to hold a vote on the infrastructure bill last week, in exchange for their votes to advance the spending framework. Ultimately she had to delay that vote after failing to convince progressive members to support it. Although political rhetoric has been kept to a minimum, the divisions within the Democratic caucus appear serious, with Biden's entire legislative agenda hanging in the balance.

Sen. Kyrsten Sinema, D-Ariz., who also opposes the overall price tag, along with a number of popular measures disliked by her major corporate backers, called the delay on the infrastructure bill "inexcusable" and "deeply disappointing" in a statement on Friday after leaving Washington to spend the weekend in Arizona, where she met with donors at a high-end resort, according to The New York Times.

"Democratic leaders have made conflicting promises that could not all be kept — and have, at times, pretended that differences of opinion within our party did not exist, even when those disagreements were repeatedly made clear directly and publicly," Sinema said, calling the dual-track plan that had been agreed to months earlier an "ineffective stunt."

House moderates hoped that Biden could break the impasse during his visit to Capitol Hill on Friday, but the president instead effectively backed the progressive caucus, downplaying the urgency of passing the infrastructure plan. Biden said the infrastructure bill would not pass without the larger spending package, which he predicted would likely end up being between $1.9 trillion and $2.3 trillion, according to Politico. Pelosi has since said that Congress needs to pass the infrastructure bill before the end of October before the extension of funding for surface transportation runs out.

White House adviser Cedric Richmond told Fox News on Sunday that there is no "time frame" on passing the two bills.

"This is just about delivering and making sure that we deliver both bills to the American people because it meets their needs," he said. "So we're not using an artificial timeline, and we're not concerned with process. We're concerned about delivering."

Senate Majority Whip Dick Durbin, D-Ill., predicted on Sunday that "concessions will be made" and some lawmakers have floated a $2.1 trillion price tag as a potential compromise, according to CNN.

But it's unclear what priorities Democrats are willing to leave on the cutting room floor. Some lawmakers have suggested cutting the overall cost of the package by reducing the length of some programs from the 10-year framework laid out in the proposal.

Jayapal told CNN that progressives want clean electricity standards to be included for the full 10-year period and said that universal pre-K, free tuition for community college, climate change measures, Medicare expansion and an extension of the enhanced Child Tax Credit were priorities for the caucus as well.

Manchin has called for means-testing certain programs like the Child Tax Credit to cut off recipients above a certain income threshold, which Jayapal said is "not what I want to do" but acknowledged that negotiations are only beginning. The negotiations, she said, have "never been about the price tag. It's about what we want to deliver."

One issue that could stall negotiations is Manchin's demand to include anti-abortion language in the spending bill. Manchin, who describes himself as "pro-life," told the National Review last week that the bill's Medicaid expansion proposal must include the Hyde Amendment, which bans the federal government from paying for abortions. "That's dead on arrival if that's gone," he said.

Jayapal told CNN that she could not vote for a bill that includes the amendment but said it would be a subject for negotiation.

"The Hyde Amendment is something that the majority of the country does not support," said Jayapal, who last week testified at a House hearing about her own abortion. "One in four women have had an abortion and need to have reproductive care in a very, very important time when those protections are being rolled back. That is nobody's business. It is our business, as people that carry the babies. And you know, we have to be able to make the choices during our pregnancy."

While Manchin and Sinema have led the opposition to Biden's spending bill in Congress, an army of lobbyists for industry groups and corporations — who hope to kill proposed tax increases and various other provisions — have waged a months-long blitz to defeat the package. Jayapal and fellow Progressive Caucus leaders Ilhan Omar, D-Minn., and Katie Porter, D-Calif., specifically called out the U.S. Chamber of Commerce, a gigantic business lobby that has backed both Manchin and Sinema, and the pharmaceutical industry, which has been a top contributor to Sinema, as key opponents who have sunk tens of millions to try to kill the bill.

"Corporate lobbyists, Big Pharma, and Wall Street executives have declared all-out war to stop the bill," they wrote in a CNN op-ed published Monday, warning that if "we allow corporate lobbyists to dictate our legislative agenda, the economic recovery will grind to a halt."

The lawmakers note that the package is supported by 62% of Americans, according to a recent poll. More than two-thirds of voters support the proposals to fund home care for seniors, affordable housing and universal pre-K, as well as the tax increases on corporations and the wealthy that would help pay for the bill.

"These were the priorities Democrats ran on in 2020," they wrote. "These were the values that allowed us to take the House, the Senate, and the White House. And by getting both the Build Back Better Act and the Infrastructure Investment and Jobs Act signed into law, we will meet the needs of the American people."