Hurricane Ida's destruction was the result of years of systemic racism

Even after a racial justice awakening, the effects of climate change and natural disaster reflect deep inequality 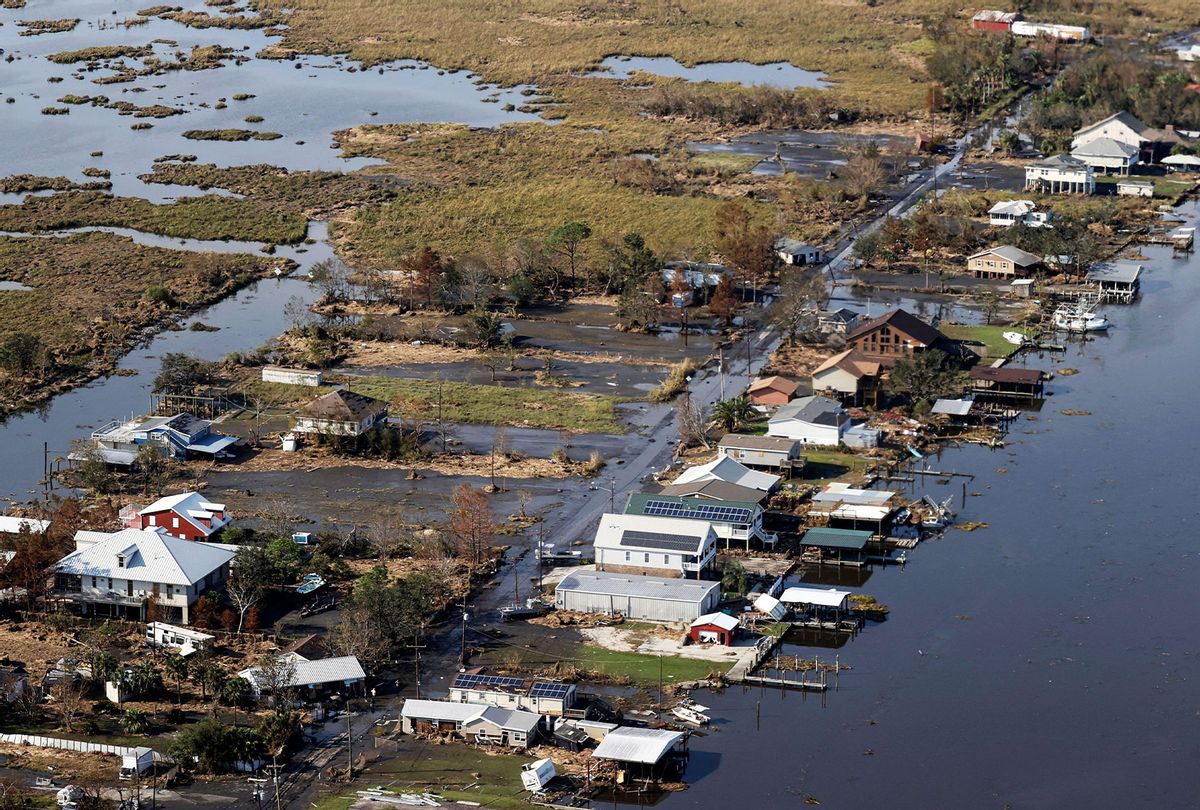 A view of flood damaged buildings are seen as US President Joe Biden (not pictured) inspects the damage from Hurricane Ida onboard Marine One during an aerial tour of communities in Laffite, Grand Isle, Port Fourchon and Lafourche Parish, Louisiana, September 3, 2021. (JONATHAN ERNST/POOL/AFP via Getty Images)
--

With nearly two months left of this year's turbulent hurricane season, thousands of Louisianans are entering their sixth straight week without power following Hurricane Ida. Meanwhile, displaced residents in search of adequate shelter for their families are piling into any neighbors' homes that are still intact, some with up to 10 people in a single-wide trailer. Destroying more of Louisiana's power grid than any other storm in the state's history, Hurricane Ida has left millions without homes or access to clean water during a pandemic.

This destruction wasn't by simple happenstance or some sort of unpredictable anomaly — it was the direct result of the failure of political and corporate leaders, year after year, to build adequate infrastructure, implement equitable protections for relief and provide Black communities the same resources and protections afforded to wealthy, white neighborhoods.

We've seen this before — 16 years ago nearly to the day, when Hurricane Katrina decimated Louisiana. The government and corporations provided no support that the people of New Orleans needed as delays in relief and rescue left millions of residents without food, water or shelter for weeks and severely undermined the economic stability of residents in the years since.

Color of Change, the organization I have led for the last 11 years, was founded in 2005 in the aftermath of Hurricane Katrina. It was born in response to a profound realization in that moment: No one in power was nervous about disappointing Black people and failing to meet our needs, not even at that massive scale of suffering. There were no consequences for hurting Black communities.

Now, 16 years later, Black people have built the kind of power that it takes to be heard. As a result of the work of the movement for racial justice, we can now see how racial impact is more and more frequently part of the policy discussion when it comes to the problems we need to solve as a country — from climate disasters and a pandemic to consumer protections to tax and education policy. But being a topic of conversation, whether in a government office or a corporate boardroom, is not enough. We do not yet have the power it takes to get the results we need when it comes to preventing events like Ida — or COVID-19 — from causing us more harm (and forcing more sacrifices from us) than other communities.

We must continue to build the power required to keep both politicians and corporations in check. This is what people are talking about when they talk about Black power: the ability to create tangible consequences for bad actors that are strong enough to prevent injustice and devastation.

When our government allows exploitative real estate corporations to develop shoddy private developments to maximize profit and displace Black residents, thousands are left without homes during a disaster. When elected leaders redirect vital infrastructure and health funds to already bloated, inept and abusive police departments, health and emergency services cannot reach those in need during times of crises. Even with widespread organizing for reinvestment into our communities, corporations actively disrupt movements for collective power and change.

Climate change and structural racism share something profound: they are both outcomes that corporations and politicians have manufactured for their own narrow purposes and profits. They also bring out the worst of corporate myth-making.

Corporate leaders have pushed the sham of individual consumption reduction as the main solution to climate change while it's apparent that reckless corporate overproduction, inefficiency and willful neglect of responsibility, including an extensive history of exploiting Black people, is the greatest contributor to climate change. Conservatives, including corporate leaders, have similarly tried to convince us that racism is a matter of individual behavior, rather than policies, systems and structures designed to maintain white supremacy and privilege.

Climate change and structural racism reinforce one another — each makes the other stronger. We need to accept that racism is a climate change accelerator, and that climate change is a major racial impact and racial justice issue. And in both cases, unchecked corporate power is the biggest driver.

Climate disasters aren't a simple misfortune — their destruction derives from geographic segregation, generational poverty and a lack of accountability from corporate powers and elected leaders who have siphoned resources from our communities from the start. Historic and current political decisions have placed Black people directly in the initial zone of climate danger. From consistent faults in emergency protocols in New Orleans, unlivable air quality for majority Black neighborhoods in Detroit produced by Chrysler production plants, investing funds to police departments and giving tax breaks to corporations, environmental racism is the direct result of those in power intentionally choosing to prioritize profits over the well-being of our communities.

Corporations that have the means to ensure housing and substantial recovery for survivors of disaster but choose to do nothing are attacking Black communities, no matter what their slick advertisements featuring Black people may say. To understand the impact of climate change and refuse to implement legislative regulations to halt its impact is another form of attack on Black communities.

As individuals around the country are showing up for survivors via fundraising, mutual aid and neighborly support, inaction from corporate powers and harmful policies implemented by lawmakers have led to New York City, one of the wealthiest cities in the world, being entirely unprepared for mass flooding in subway systems and homes as a result of Hurricane Ida. Both private corporations and public elected officials have a responsibility not only to provide the necessary relief, but to prevent this kind of negligence from causing more damage in the future.

Last year, corporations of all kinds publicly claimed to care about racial justice. But the fact is, moments like these let us know which corporations are actually willing to put their money where their values are. Energy providers like Entergy and hospitality companies like Hyatt have an opportunity to uphold their commitments to justice and directly help those displaced in Louisiana. If they claim to care about Black lives, they, too, must support Black livelihood and wellbeing.

Forcing Black communities to bear the brunt of climate disasters disproportionately is not only unjust but will only postpone the moment at which we realize that climate change is an issue that affects us all and will drastically impact our shared fate. We must see decisive and effective action — right now — from the corporations that say Black lives matter, in order to undo decades of racist political and corporate exploitation that have targeted Black communities.

But that requires investing more effort in movements for racial justice that can create consequences for those corporations if they fail to act. Rather than letting the intense energy of 2020 fade away, we must take that energy and our collective focus on racial justice to the next level. And that means increasing our support for Black-led organizing and Black community power. That is the only true bulwark against the flood of bad decisions that continue to produce climate disasters.